Accessibility links
Watching A Brown 'Hamilton' With A White Audience : Code Switch The hit musical recasts the Founding Fathers as people of color engaged in rap battles. But on a recent night, ticket buyers largely looked the way Broadway audiences have always looked. What gives? 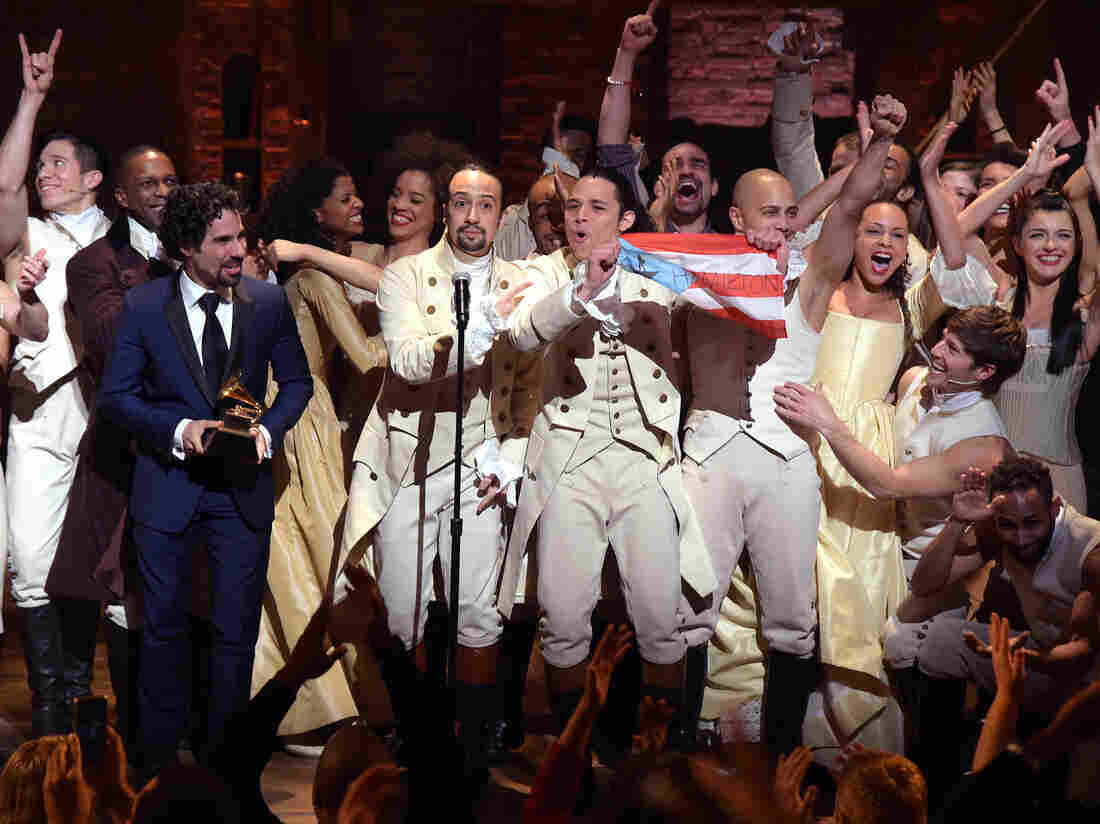 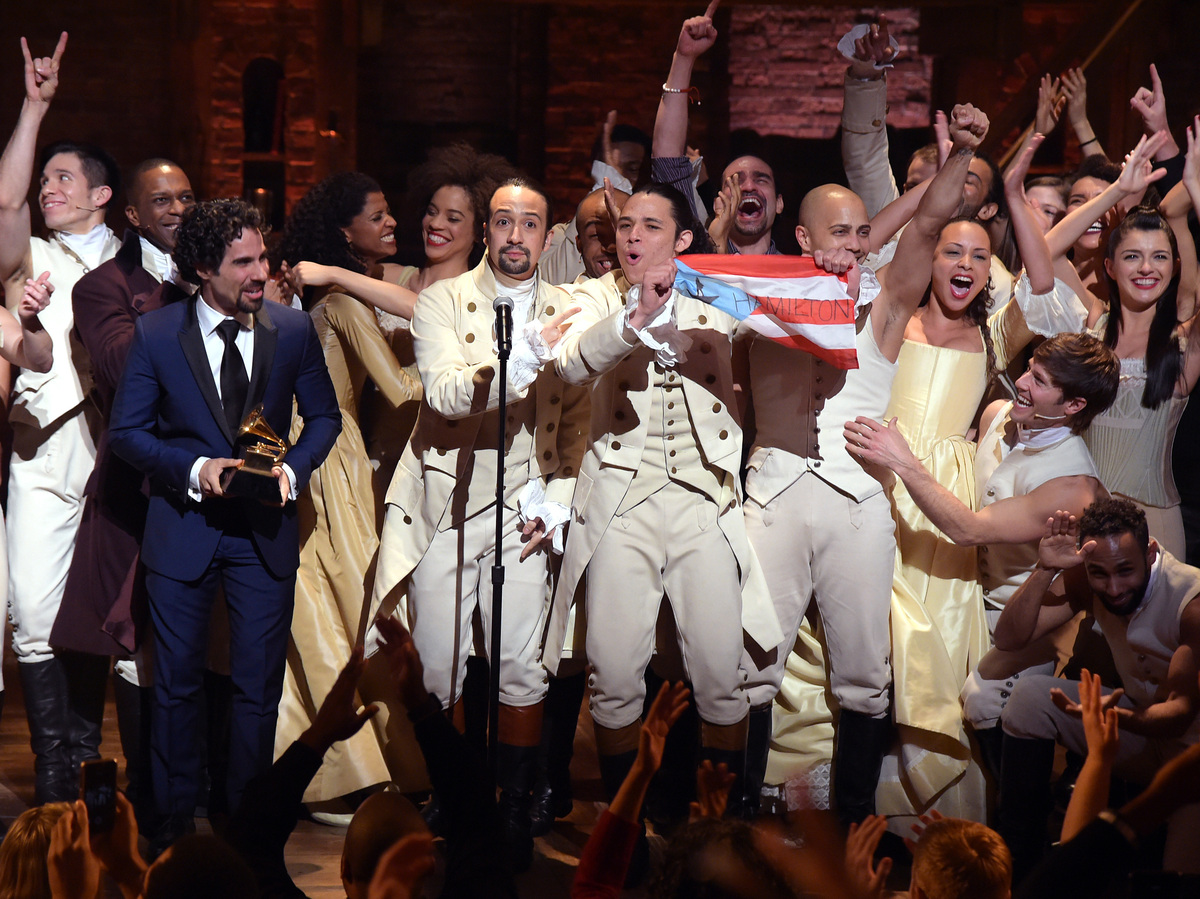 On Friday night, I finally got to see Hamilton, the critically acclaimed musical I've been surprisingly obsessed with since Frannie Kelley's glowing write-up of the cast album last fall.

I say "surprising" because I am not a fan of musical theater, the kind of not-a-fan-of-musical-theater who pointedly self-describes as such should musical theater come up in conversation. But there I was, gripping my seat, as Leslie Odom Jr., the virtuoso who plays Aaron Burr, stood onstage by his lonesome in "Wait For It," my favorite song in a show lousy with fantastic songs.

That number, all about frustrations and ambition and jealousy and doubt, knocked me on my ass the first time I heard it on the album, — like, wtf, do I actually like musicals now? — and the live experience was equally overwhelming. I'd read somewhere that Odom and other cast members regularly focus their attentions on particular audience members while performing, and I'm 95 percent sure that Odom was looking dead at me in the sixth row, as I mouthed along all the words to his song. Just two Philly dudes separated by a few dozen feet and a gaping chasm of musical ability sharing this moment of real connection.

I told my colleague/friend Stephen Thompson, who was with me that night, about this during intermission, and he joked that it was probably because Odom and I seemed to be the only black guys in the theater that night. We laughed, but it was hard not to notice that while Hamilton has been hailed for deliberately casting actors of color as some of America's most venerated Dead White Men, and "reclaiming the American story ... for the people whom history habitually forgets," the actors onstage seemed to make up the majority of brown people in the house the night I went.

This is of course an unscientific study, based on me craning my neck and looking around the room, but three other folks who've seen the show recently tell me the audience was overwhelmingly white when they went, too. Yesterday, I asked folks on Twitter who've seen the show to share their experience, and many of them told me the same thing.

I'm avoiding making a too-obvious "Great White Way" joke here, but it seems these observations track with Broadway audiences in general; according to The Broadway League, the trade association for the Broadway theater industry, nearly 8 in 10 people who saw Broadway shows in 2014-2015 were white and in their mid-40s. (That's more diverse and a decade younger than NPR's audience, for the record.) About 80 percent had college degrees and about 40 percent had graduate degrees.

Now, I'm not arguing that black and brown folks "should" go to Broadway shows, and there is, of course, lots of theater, far from Broadway, that caters to audiences of color. But it's worth asking why this ostensibly uber-POC-friendly phenomenon isn't consistently pulling a notably black and brown audience.

A bunch of folks in the Twitter conversation yesterday suggested that who goes to Broadway shows is a simple matter of dollars and cents. James McMaster at HowlRound recently made a similar assertion about Hamilton, which you pretty much can't see without parting with a couple of hundred bucks:

The exorbitantly high ticket prices coupled with the perpetually sold-out status of the production prohibit most working class people of color from attending the show. Given that the production's audience, then, is overwhelmingly white and upper-middle-class, one wonders about the reception of the show's racial performance. How many one-percenters walk away from Hamilton thinking that they are on the right side of history simply because they exchanged hundreds of dollars for the opportunity to sit through a racialized song and dance? My guess: too many.

This is a compelling argument, but then again, nearly half a million folks book flights and hotels and tickets for EssenceFest in New Orleans each year. Then there's the mad rush a few weeks back for tickets for Beyoncé's surprise tour. That is to say, there's a whole lot of pricey entertainment that people of color are willing to drop serious dough on, but Broadway shows like Hamilton don't seem to rate. Money matters, of course, but it's not the whole story.

When it comes to race and Broadway audiences, a big part of the story seems to be acculturation. Theater has a long history of segregated seating and plays chock full of racist caricatures that meant black folks, in particular, never warmed to Broadway. "Theatergoing on Broadway is supported by families who collected programs going back 50 or 80 years," James Hatch, the co-author of A History of African American Theatre, told WNYC in 2012. "Blacks did not have that tradition, and apparently still don't."

That plays out today in the important, subtle social cues about who belongs. It's hard enough getting comfortable in a social space when you're unfamiliar with its rules and conventions. It's even harder when you're aware of how much you stand out. At Broadway shows like Hamilton, you get the honor of having that experience for a few hundred dollars. Even as Hamilton exceeded my impossibly high expectations, I felt a vague unease sitting there that night, like I was at a hip-hop show where my favorite group was performing, but I might get shushed for rapping along too loudly. (But c'mon, y'all: HERCULES MULLIGAN!)

Not being a regular theatergoer or a Broadway vet meant I didn't know exactly how to be in the audience. I was unfamiliar enough with the ritual and customs of that space to be worried that I might be doing it wrong somehow. Could that disconnect be keeping folks who might shell out comparable cash for Bey, even if it means traveling to another city, from doing the same for Hamilton? Something I've been chewing on, and sound off on Twitter if you think I'm wildly off-base here.