Accessibility links
On Who Gets To Be A 'Real American,' And Who Deserves A Helping Hand : Code Switch With a pair of provocative pieces about white working-class Trump supporters, the National Review has essentially redrawn a line in the sand.

On Who Gets To Be A 'Real American,' And Who Deserves A Helping Hand

On Who Gets To Be A 'Real American,' And Who Deserves A Helping Hand 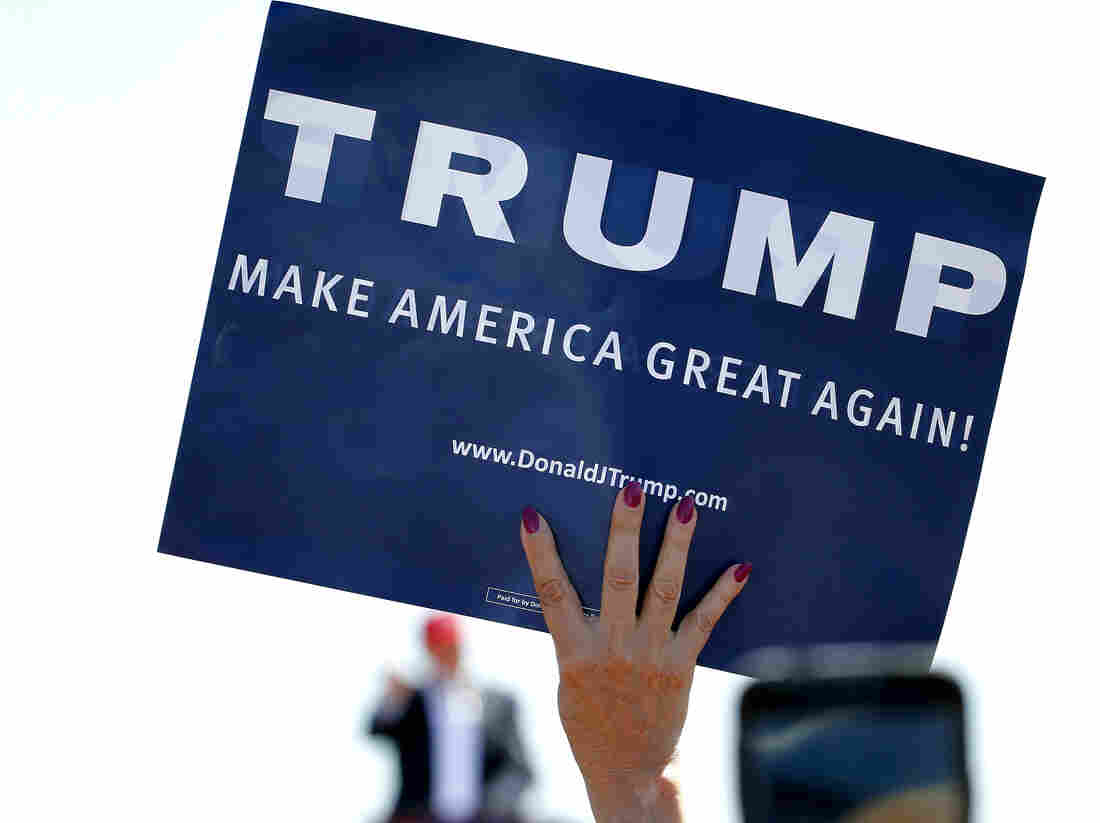 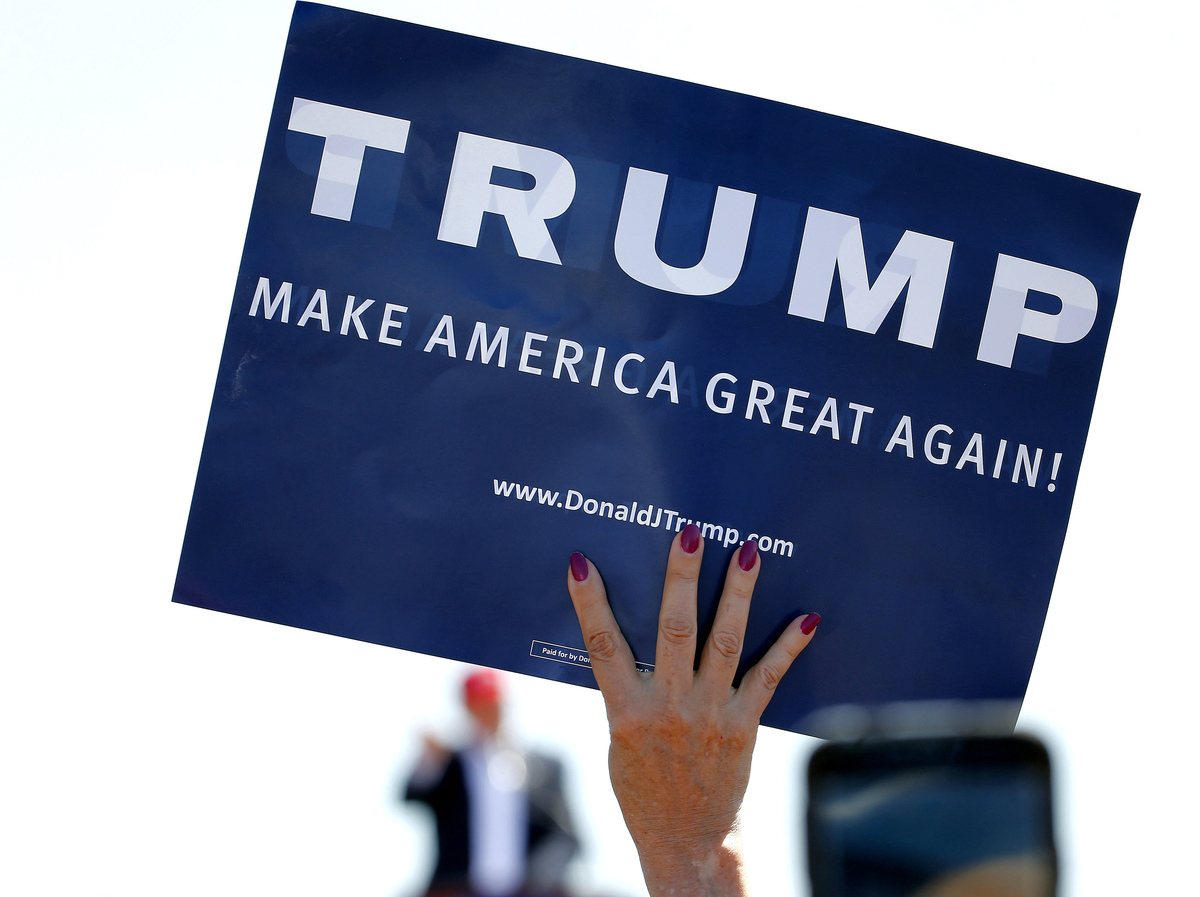 A supporter holds a sign as Republican presidential candidate Donald Trump speaks during a campaign rally in Arizona.

One way to take the temperature of the Republican Party's ongoing tumult this election cycle is to consult The National Review, the conservative magazine founded in 1955 by William F. Buckley. The magazine has been so opposed to Donald Trump that it pitched its entire January issue against his candidacy. A number of right-leaning luminaries contributed, warning primary voters that the reality TV mogul's continued rise could doom the conservative project writ large.

The magazine's warnings have clearly gone unheeded by much of the Republican rank and file. But the Review is still at it. Earlier this month, it published an incendiary essay by Kevin Williamson, one of its most reliably provocative writers, titled "Chaos in the Family, Chaos in the State: The White Working Class's Dysfunction."

In it, Williamson rails at white working-class voters for, in his telling, mooching off the government as their families collapse into disarray and drug addiction. He says their attraction to Trump is driven by an undue sense of grievance:

"[It is a lie] that the white working class that finds itself attracted to Trump has been victimized by outside forces. It hasn't. The white middle class may like the idea of Trump as a giant pulsing humanoid middle finger held up in the face of the Cathedral, they may sing hymns to Trump the destroyer and whisper darkly about "globalists" and — odious, stupid term — "the Establishment," but nobody did this to them. They failed themselves. ... If you spend time in hardscrabble, white upstate New York, or eastern Kentucky, or my own native West Texas, and you take an honest look at the welfare dependency, the drug and alcohol addiction, the family anarchy — which is to say, the whelping of human children with all the respect and wisdom of a stray dog — you will come to an awful realization. ... The truth about these dysfunctional, downscale communities is that they deserve to die."

Their communities deserve to die. Yikes.

As Slate's Ben Mathis-Lilley has noted, among others, Williamson's essay is remarkable in that it echoes rhetoric long deployed against Americans who rely on financial assistance from the government — "takers vs. makers," "welfare queens" — but here, that rhetoric is being weaponized against "downscale" white folks. (The essay is behind a paywall, but Mathis-Lilley quotes extensively from it.)

Williamson's piece predictably raised lots of eyebrows — in right-wing circles and beyond — and David A. French, also at the National Review, came to his colleague's defense in a post responding to the backlash. "Kevin is right," French wrote. "If getting a job means renting a U-Haul, rent the U-Haul. You have nothing to lose but your government check." (French doubled down again this week with a post titled, "The Great White Working-Class Debate: Just Because I'm 'Nasty' Doesn't Mean I'm Wrong.")

These National Review offerings help demarcate the widening, well-documented chasm between the Republican Party's base and, with apologies to Williamson, its "establishment." What's fascinating is the similarity of the charge on both sides of the fence. The base's ongoing complaint — that the party establishment is out of touch with the concerns of "real Americans" — and Williamson's screed essentially send the same message: Act right, or risk getting kicked out of the club.

The whole fracas reads like a fun house mirror version of John Ridley's notorious 2006 Esquire essay, "The Manifesto of Ascendancy of the Modern American Nigger" — or even Bill Cosby's infamous "Pound Cake Speech." These were angry, very public screeds by prominent black folks against poorer black folks for their supposed moral shortcomings, manifestos that essentially drew a line in the sand indicating who gets to claim membership in "real" blackness, and who doesn't.

The Review pieces also offer up a rare, if crude, example of direct public engagement with white identity politics in (relatively) mainstream American political life. We don't tend to think of white folks' fights to secure government benefits and protections as "identity politics," informed by a set of grievances specific to one's racial or ethnic background. We tend to talk about these fights in terms of religion, class and other markers, or simply as politics, without racial or ethnic qualifiers. Can Mitt Romney win over evangelicals? Blue-collar workers are feeling the pressures of wage stagnation! The widely understood subtext is that most of the folks in question are also white.

This election cycle, there's notably broad, public acknowledgement that the concerns and complaints of many white voters are all tied up with race and racially motivated unease. To understand how those National Review pieces grapple with white identity politics — whether they intended to or not — we first have to talk about how membership in the "club" of whiteness has functioned in American political life over time.

At any given moment in American history, the lives and rights of people who were theoretically American, but not "white," centered on where their group could be plotted in relation to whiteness. That relationship could fluctuate over time.

For instance, European immigrants who settled in the United States in the 19th and 20th centuries were often charged with indolence, moral degeneracy and criminality, and their arrivals flamed anxieties around how these groups might change the fundamental character of America. (Sound familiar?) But these sentiments waned over time, as these communities were absorbed into the broader galaxy of American whiteness and therefore granted entry into "real Americanness."

At times, people of color have tried to argue for greater rights in ways that made that connection between "whiteness" and "real Americanness" more explicit, even technical. In the first decades of the 20th century, two different Supreme Court cases, brought just a few years apart by Asian-Americans — one with roots in India, the other with roots in Japan — rested on the plaintiffs' argument that they should be considered Caucasoid in accordance with the anthropological understanding at the time, and thus deserving of all the rights and civic protections of Americanness enjoyed by white America. (The high court ruled against them both.)

The conflation of Americanness with whiteness has also determined, at times, who is seen as "deserving" of help, and who isn't. To create support for the postwar New Deal programs that effectively created the white middle class — the GI Bill, Social Security, etc. — legislators baked in the ability to exclude black folks. "At the very moment a wide array of public policies were providing most white Americans with valuable tools to gain protection in their old age, good jobs, economic security, assets and middle-class status, black Americans were mainly left to fend for themselves," writes Ira Katnelson, a political scientist at Columbia.

This is all to say, the tug of war over who gets to enjoy the benefits reserved for "real Americans" has always been all tied up with racial politics. People of color were overwhelmingly excluded during the "glory days" that so many white voters this election cycle look back on as better times. That's why Trump's "Make America Great Again" mantra reads so menacingly to so many — whiteness seems to be a necessary precondition for that nostalgia.

Which brings us back to the modern Republican Party, which has long positioned itself as the party of "real America" — a characterization with unavoidable racial shadings when nearly all Republicans are white people.

A central goal of the mainstream conservative establishment (of which the National Review is a part) has been to stunt and roll back the size and influence of government, with the welfare state right in the crosshairs. But to the chagrin of the Republican brass, Trump's vocal support for some types of social safety nets that conservatives are supposed to disdain — claiming, for example, that he would replace Obamacare with a single-payer health care system — hasn't repulsed the "downscale" rank and file.

Instead, Trump's ascendance has been fueled less by concern over slashing and destroying entitlements, broadly speaking, than by a desire to protect those entitlements for the right people. "Mr. Trump is a political harbinger here of a new strand of populist Republicanism ... in which the 'conservative' position is to defend the existing entitlement programs from a perceived threat posed by a new-style Obama coalition of handout seekers that includes the chronically unemployed, students, immigrants, minorities and women," wrote the Wall Street Journal's Holman Jenkins.

The American Enterprise Institute's James Pethokoukis put it more bluntly: Government funds that end up in the hands of likely GOP voters (Medicare and Social Security) are considered "earned benefits," but those that help likely Democratic voters (Medicaid, Obamacare, income supports) are slapped with the stigmatized "welfare" label.

David Frum of the Atlantic, a former speechwriter for George W. Bush, recently drew a connection to similar anxieties in Europe expressed by folks who staunchly defend the welfare state while expressing broad suspicion toward new claimants to it:

"These populists seek to defend what the French call 'acquired rights' — health care, pensions, and other programs that benefit older people — against bankers and technocrats who endlessly demand austerity; against migrants who make new claims and challenge accustomed ways; against a globalized market that depresses wages and benefits. In the United States, they lean Republican because they fear the Democrats want to take from them and redistribute to Americans who are newer, poorer, and in their view less deserving — to 'spread the wealth around,' in candidate Barack Obama's words to 'Joe the Plumber' back in 2008. Yet they have come to fear more and more strongly that their party does not have their best interests at heart."

You might view the dust-up over the National Review pieces as conservatives fighting over where the line in the sand between "real Americans" and "everybody else" rightly belongs. The establishment view seems pretty clear: Those who reach for government handouts need not apply. But huge swaths of white, working-class Americans seem to see things differently this election cycle: "Real Americans" — like them — deserve help, and everyone else needs to shape up or ship out.

Just like in the past, the current debate over who gets to be a "real American" is all tied up with bigger debates about race and immigration. What's so fascinating about the latest iteration of this fight is that many white conservatives — whether "downscale" or "establishment" — suddenly see their fellow "real Americans" standing on the wrong side of the line.