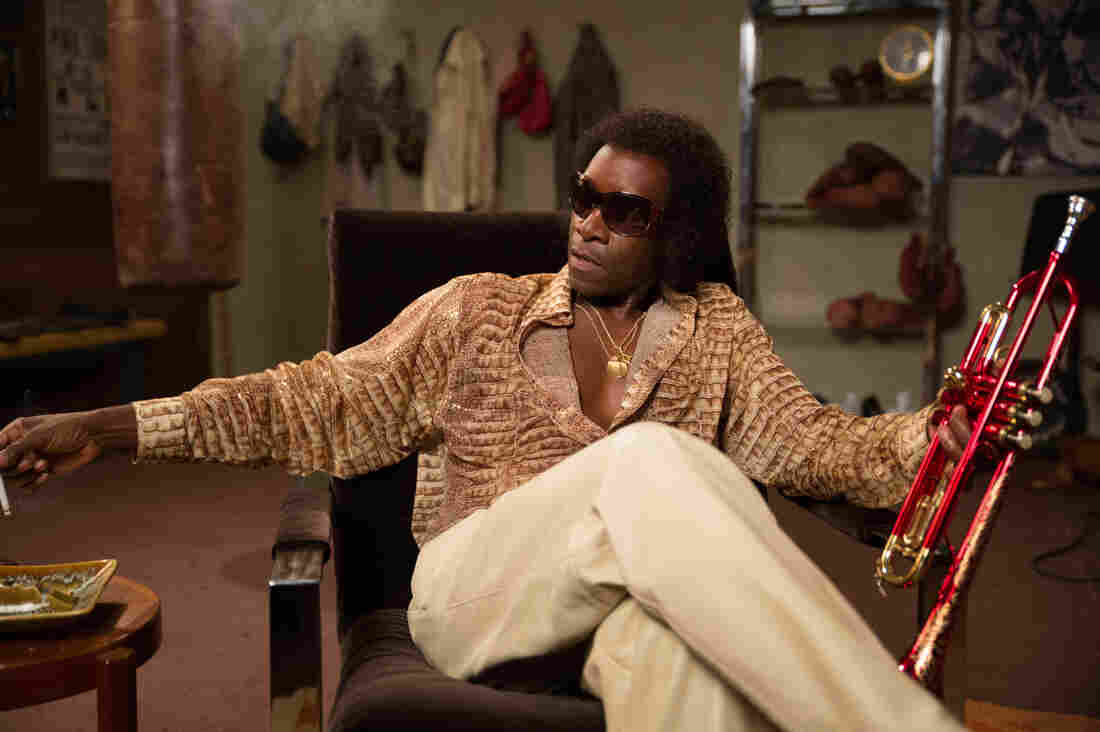 Don Cheadle plays Miles Davis in the movie Miles Ahead. Cheadle's portrayal is being hailed as capturing the "badass" swagger that made Davis a hero to generations of black men. Sony Pictures Classics hide caption 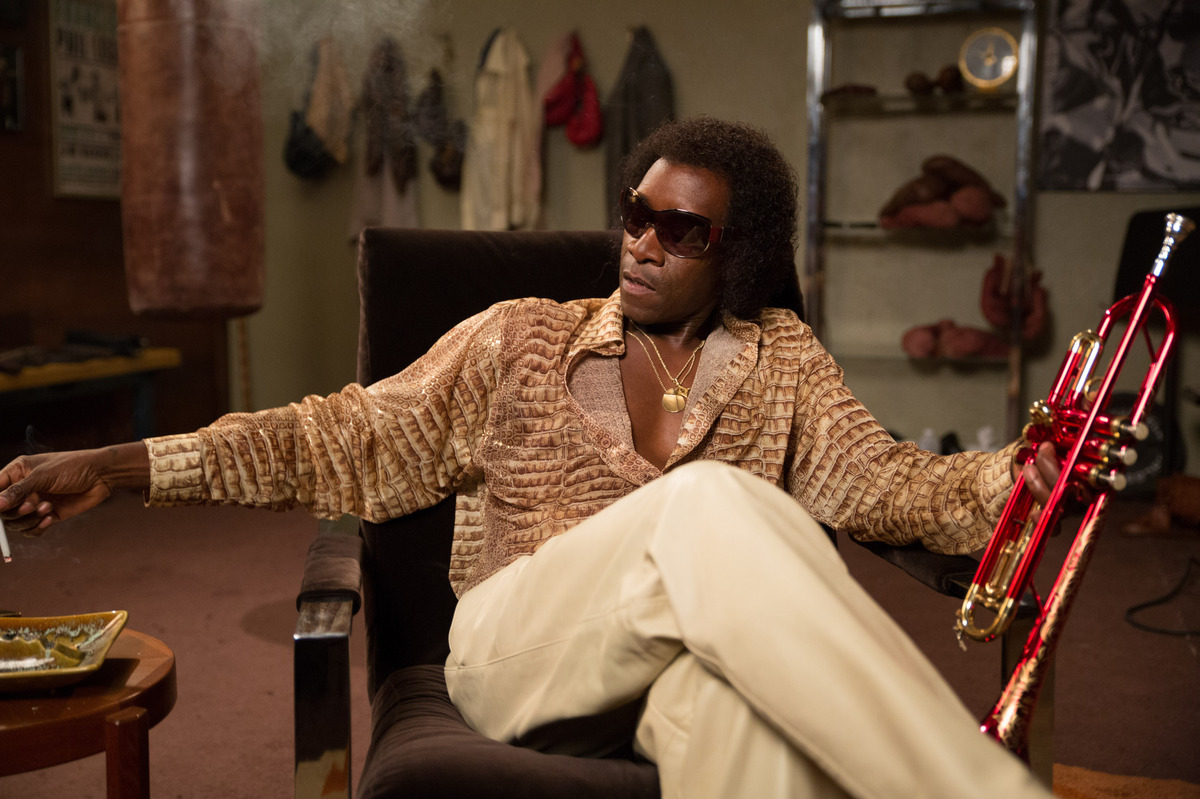 Don Cheadle plays Miles Davis in the movie Miles Ahead. Cheadle's portrayal is being hailed as capturing the "badass" swagger that made Davis a hero to generations of black men.

This is dating me, but I know this to be true: In the 1970s, black guys who wanted to be considered culturally serious always had some Miles to throw on the turntable. They might jam to Sly Stone, James Brown or Earth, Wind & Fire at a party. They often sang Stevie Wonder at the top of their voices while in the shower. But on quiet evenings, it always went back to Miles. Maybe they were alone after a long day. Often there was a girl they wanted to impress. (Confession: sometimes I was that girl.) It could be classic Miles (something from Kind of Blue or Porgy and Bess) or modern Miles (Bitches Brew), but it was always Miles.

And only part of it was the music. The other part was Miles himself: small, and wiry, with a coiled intensity, piercing eyes, and a soft, raspy voice, Miles radiated energy even when he was sitting still. He was concurrently hot and very, very cool. And he knew it. And he didn't care whether you agreed with him. Your validation was irrelevant. Miles' validation of himself was enough.

When Is A Biopic Not A Biopic? When Don Cheadle Meets Miles Davis

Quincy Troupe co-authored Miles' autobiography Miles Davis. He grew up, as Davis did, in East St. Louis, Ill., a mostly-black town just outside St. Louis. Troupe remembers well the admiration that followed Miles whenever he walked through the neighborhood. "When I was growing up, I wanted to be like Miles Davis," he admits. "All my cousins wanted to be Miles Davis. Then I found out as I got older, that the older men felt the same way."

It was the walk, the stance, the confidence. That latter was bolstered, Troupe laughs, by the ability to box. "Our fathers got us lessons. Back in the day, everybody lived together, because things were segregated, you know. So the teacher, the pharmacist, the numbers-runner, everybody lived together." And Miles, apparently, was not going to be bullied by some of the neighborhood's tougher residents. "He was not a fighter. He didn't go looking for trouble," Troupe remembers. "But if you came for him, you'd better be ready."

Duke University professor Mark Anthony Neal often writes about the image of black men in popular culture, and says Miles' determination to speak up for himself was consistent, and a large part of why he was so admired. Growing up in the pre-civil rights 30s and 40s, Neal says, "Miles faced the reality of white supremacy." But he didn't allow that to stop him: "he had such confidence in his music, and as he put it in his memoir, his ability to change music, despite white supremacy, he continued to do this on his own terms."

In Miles Ahead, Don Cheadle portrays Miles as a stubborn artist who was completely confident in his work. "Miles Davis was a man who didn't suffer fools lightly in general," says Los Angeles film critic Tim Cogshell (who, like Troupe and Neal, is African-American). Cogshell says that Davis "established himself as a black man who would be respected as a man, period."

Part of the reason that was so important, according to Mark Anthony Neal, is because assertive, confident black men were not often portrayed in popular culture, especially movies. Neal says Cheadle's Miles Davis is a welcome antidote to the plentiful stereotypes of mindlessly violent black men we see in so many movies from glorified gangster leads, to small roles as "Thug Number 6." Or 8. Or 10.

Cogshell says there have never been more than one or two black male movie stars at any one time who fit the "Manly Black Man" template, which he describes this way: "He'd be a serious person, who can be funny but who is not required to be funny...the kind of character who commands the same sort of ordinary respect afforded his white male contemporaries."

Paul Robeson often played such characters, and, points out Cogshell, was a real-life badass. "He was an anti-imperialist, he associated with the communist party, he criticized the American government. That led to him being blacklisted in the 50s, and he did not back down or recant what he said his entire life." The men he played in movies, whether a self-made despot in The Emperor Jones or a Mississippi stevedore in Show Boat, were Manly Men.

There was a long dry spell for serious black leading men in mainstream movies until 1960s. That's when Sidney Poitier made cultural history with his role as Virgil Tibbs, a steely homicide detective temporarily stuck in the Deep South in the 1967 thriller In The Heat of the Night. In that film, Poitier's character famously tells the local Mississippi lawman (memorably played by Rod Steiger) they do not call him "boy" in Philadelphia, "They call me Mister Tibbs!"

Poitier had already won an Oscar in 1963 for the feel-good movie Lillies of the Field, but this movie indelibly branded him as a badass. Especially the scene when Tibbs questions a bigoted white judge. The judge, outraged, slaps Tibbs, and Tibbs immediately slaps him right back.

It was an electric moment in the movie. Even now, almost 50 years later, says New York Times Magazine critic-at-large Wesley Morris. "It takes your breath away," he says. "You feel like Sidney had been practicing for that moment, in his head, for 20 years."

"I think in some ways, it's still like one of the most remarkable moments we've ever seen," agrees Mark Anthony Neal, "at least in its depiction of African American men."

Blaxploitation brought a few black male heroes to the fore, but Richard Roundtree as New York private detective John Shaft topped the list. Roundtree was limber, athletic, sexy as all get out (Roundtree was a former model). And sex appeal, says Morris, is an essential badass element. "I think you definitely have to have some kind of charisma that veers into the libidinous."

Enter Denzel Washington. Serious. Sexy. Assertive. Whether he was pursuing Truth (and, kind of, Julia Roberts) as a reporter in The Pelican Brief, suing a law firm on behalf of dying Tom Hanks in Philadelphia, or landing an airliner upside-down and saving countless passengers' lives in Flight, Washington was very much the leading man. But now, says Cogshell, "Denzel's aged out. No crime in getting older. But Denzel, Fish (Laurence Fishburne) and maybe Wesley Snipes, those were the last guys who held that mantle for us." 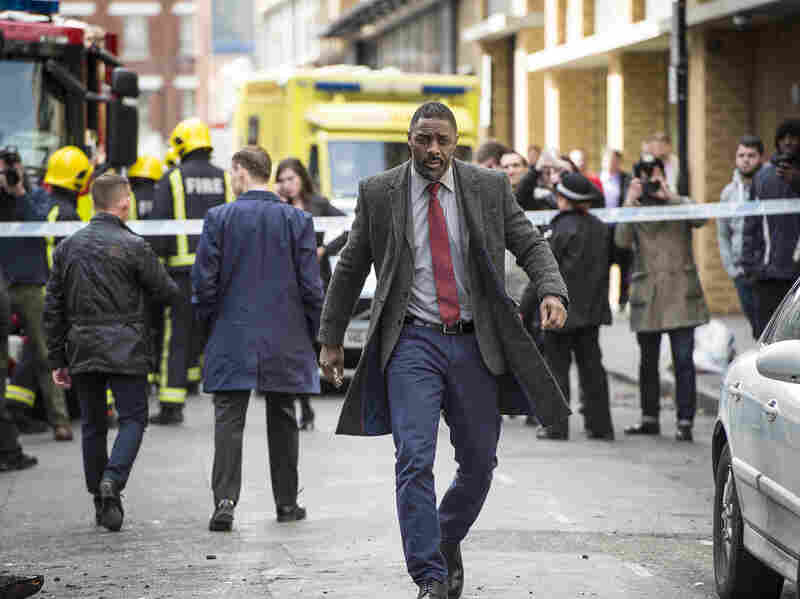 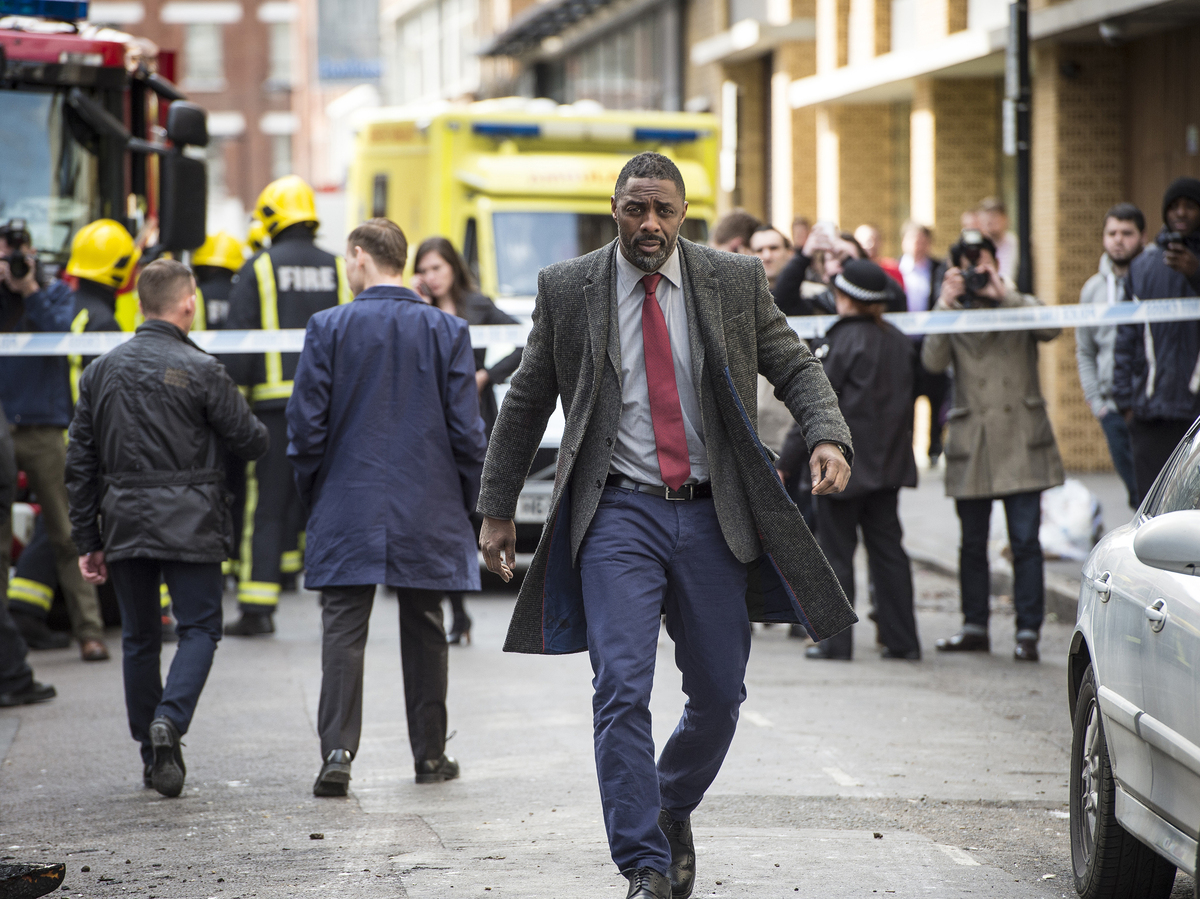 Who's next? Interestingly, Cogshell says none of the current American black male leads are it. Sam Jackson, Jamie Foxx and Will Smith are all are solid box office draws. But they don't, according to Cogshell, possess the kind of presence that is the hallmark of a true badass.

So if not any of them, is there anybody out there who's heroic and sexually compelling enough to qualify?

The British actor has several roles that have made him a star in on this side of the water, too: as London detective John Luther, in the BBC crime series "Luther" Elba's character looks evil in the face and sometimes seduces it, in the line of duty, of course. As Baltimore drug lord Stringer Bell in The Wire, and even as a charismatic jungle warlord in Beasts of No Nation, Elba is edgy, sexy and completely compelling.

So is Don Cheadle's Miles Davis, which is why critics are lauding him and why the brothers on the streets and in the suites will be celebrating this firmly self-possessed badass genius.

And why turntables everywhere will be getting a fresh workout. Trust.