Accessibility links
Some Blacks Did Support Bill Clinton's Crime Bill. Here's Why : Code Switch Bill Clinton was right in saying that some African-Americans supported the 1994 crime bill. It was part of the response to the crack epidemic that devastated many black communities in the 1980s. 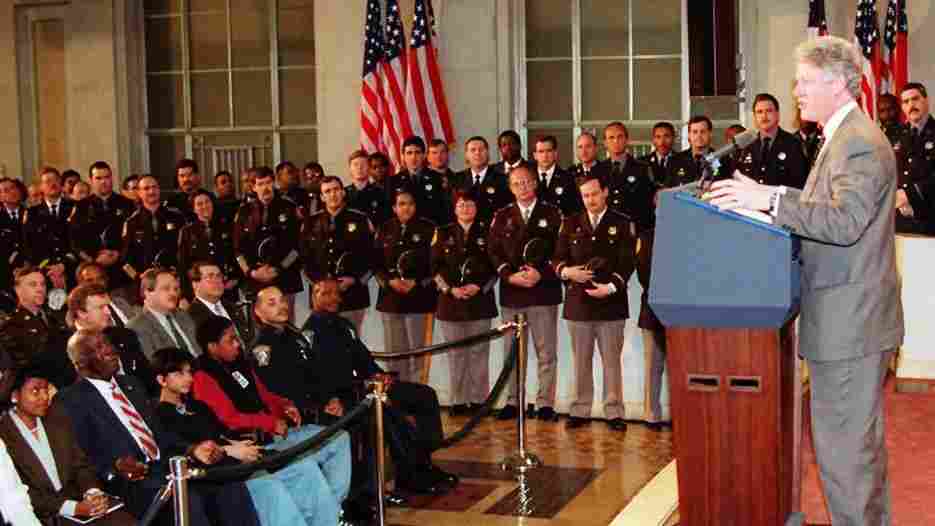 President Bill Clinton speaks about his crime bill to police officers at the Justice Department in April 1994. This week, Clinton defended the measure, which has been criticized by Black Lives Matter protesters. Joshua Roberts/AFP/Getty Images hide caption 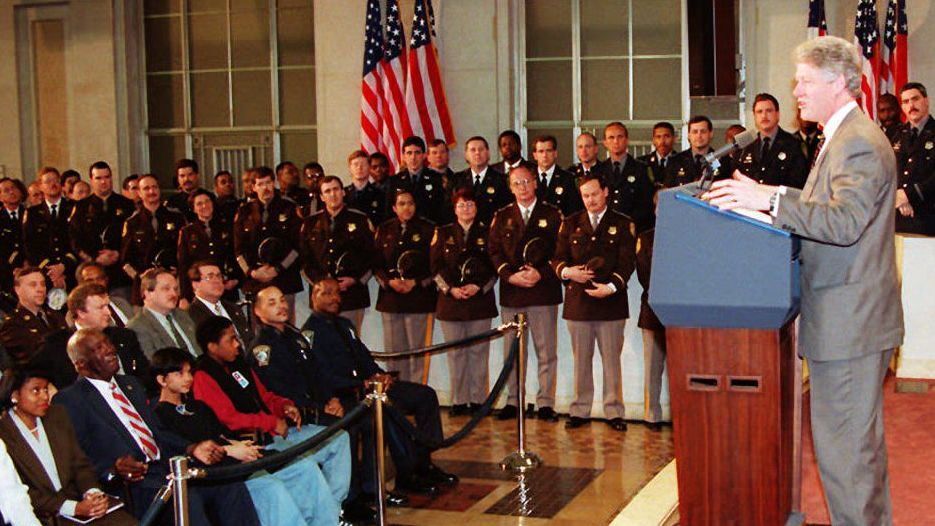 President Bill Clinton speaks about his crime bill to police officers at the Justice Department in April 1994. This week, Clinton defended the measure, which has been criticized by Black Lives Matter protesters.

In the way only he can, former President Bill Clinton has walked back his confrontation with Black Lives Matter protesters earlier this week.

"I did something yesterday in Philadelphia that I almost want to apologize for," he said, before attempting to turn the whole thing into a lesson about the need for civility in politics.

The spectacle of the former president shaking his finger during a tense back and forth with BLM demonstrators was a bad look for him, and a distraction for Hillary Clinton's campaign. But at least on one level, his defense of his 1994 Violent Crime Control Act was true; it did have some support — or tacit approval — among black leaders and citizens.

Clinton described the harsh sentencing provisions — especially the ones connected with crack cocaine that disproportionately hurt African-Americans — as an unpleasant but necessary compromise with tough-on-crime Republicans. "I talked to a lot of African-American groups," Clinton said. "They thought black lives matter. They said, 'Take this bill, because our kids are being shot in the street by gangs.' "

This response struck me as incomplete and self-serving, but also true. The young people shouting at Clinton today grew up in the shadow of problems they — and many researchers — trace to the 1994 crime bill: the stop-and-frisk approach to law and order, frequent incidents of excessive police force, and long prison sentences for non-violent drug offenses that condemned the incarcerated to poverty and second-class citizenship when they finally got out.

That's their generation's experience. As a child of the 1980s, my experience was as a young witness to the drug crisis that led to that law. I rarely felt personally threatened in those days, but the city I was born in, Washington, D.C., was never the same.

When I was a kid, summers meant long visits to my city cousins. It wasn't that long a trip from my Maryland suburban home. But for me and my brother, it could still feel like an adventure, even though we mostly did the same kid stuff we did at home: bike rides, trips to parks and playgrounds, games in the yard. At night, as long as we were in sight of a grown-up, we could be in the front yard or the back, playing catch or hula hoops, or jumping rope or chasing lightning bugs with empty jars.

Even then, there were drugs in some of these neighborhoods, but we knew that if you stayed away from the folks who were involved with them, they'd stay away from you. My mother, who had moved us out of the city in search of better schools, wasn't too worried. She was concerned that we'd pick up bad grammar from the kids in the neighborhood. She cautioned us to be wary of broken glass and the city traffic that might move too fast for our cul-de-sac conditioned ways. "Be careful and be good," she would always say.

Crack changed that. Crack changed everything. Even though none of my family members lived in the heart of the violence, the threat hovered just a few blocks away. The Washington Post and other media reported the grim facts. Murders climbed from 147 people in 1985 to 194 in 1986 and 225 in 1987. And kids were getting caught up in the violence and the crime. Between January 1987 and October 1988, nearly 500 children had been shot and stabbed. Almost 1,400 kids under the age of 15 were arrested in the anti-drug effort called Operation Clean Sweep. These scenarios were playing out in Los Angeles, New York, Baltimore and many other cities.

For me personally, the consequences were minor, but the fear was real. After the crisis began, summer visits to the city meant staying inside for long stretches of board games and television. My cousins talked about friends and some of our own relatives who were in trouble. The hushed conversation of the grown-ups touched on how the drug trade and the crime that surrounded it threatened my generation. When I heard that a childhood friend, a young black college student, had been killed, I was somehow relieved to hear he'd been killed by a drunk driver rather than a gun.

One of the songs I remember from those years was "Self-Destruction." A group of rap stars calling themselves the Stop the Violence Movement — including KRS-One, MC Lyte and Public Enemy — preached against black-on-black crime. They lamented that the violence reinforced stereotypes and played into the hands of people who hated African-Americans.

"I never ever ran from the Ku Klux Klan," Kool Moe Dee raps, "and I shouldn't have to run from a black man."

From what I remember, there had always been a feeling that the police could be more of a threat than a help to black people. But the idea that black boys and men would kill each other in such large numbers, often over trivial disputes, was a terrifying revelation. It was an emergency. People responded that way. Many got involved in prayer services, marches, vigils, neighborhood watches, mentoring and after-school programs to keep kids safe and out of trouble. Others moved out of communities where they had once hoped to raise their children. A lot of folks did both.

And so what did the government do? For many years, the answer I heard was "not enough." If white folks had been getting killed, if their houses were getting broken into and their neighborhoods were being ruined, government would've done something. But the sense was that because black people were suffering and dying, no one cared.

That's why many of the African-Americans who voted for Bill Clinton also supported that now-infamous crime bill. Lots of people were willing to take "help" in whatever form it was offered, whatever the future consequences might be. Otherwise, many had a hard time seeing any future for themselves, their families or their cities.

Now, a generation later, the Black Lives Matter protesters are having to live in that future, and not just the good parts that former President Clinton wants to take credit for. There are reasonable questions about the manner of their protest, and even the fairness of holding Hillary Clinton to account for the policies of her husband. But there's also the uncomfortable truth that those responsible for helping to put those policies in place could include the parents and grandparents of BLM protesters, their aunts and uncles ... people like me.