Accessibility links
Talking Housing Segregation And Chicago With WBEZ's Natalie Y. Moore : Code Switch A longtime Chicago reporter, a native of the black South Side, digs into the ways segregation continues to shape the politics of her hometown, as well as her own life. 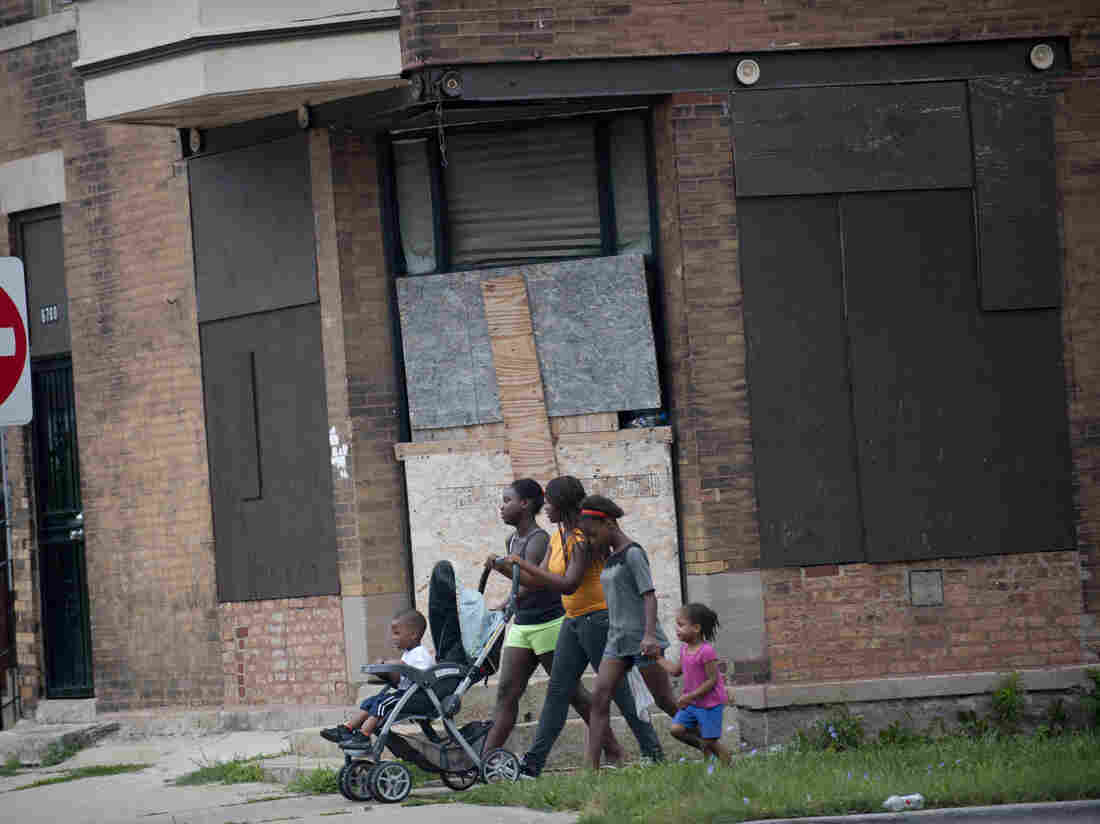 While other neighborhoods in Chicago have gentrified, the South Side has seen far less new investment — particularly from retailers. Bill Healy/St. Martin's Press hide caption 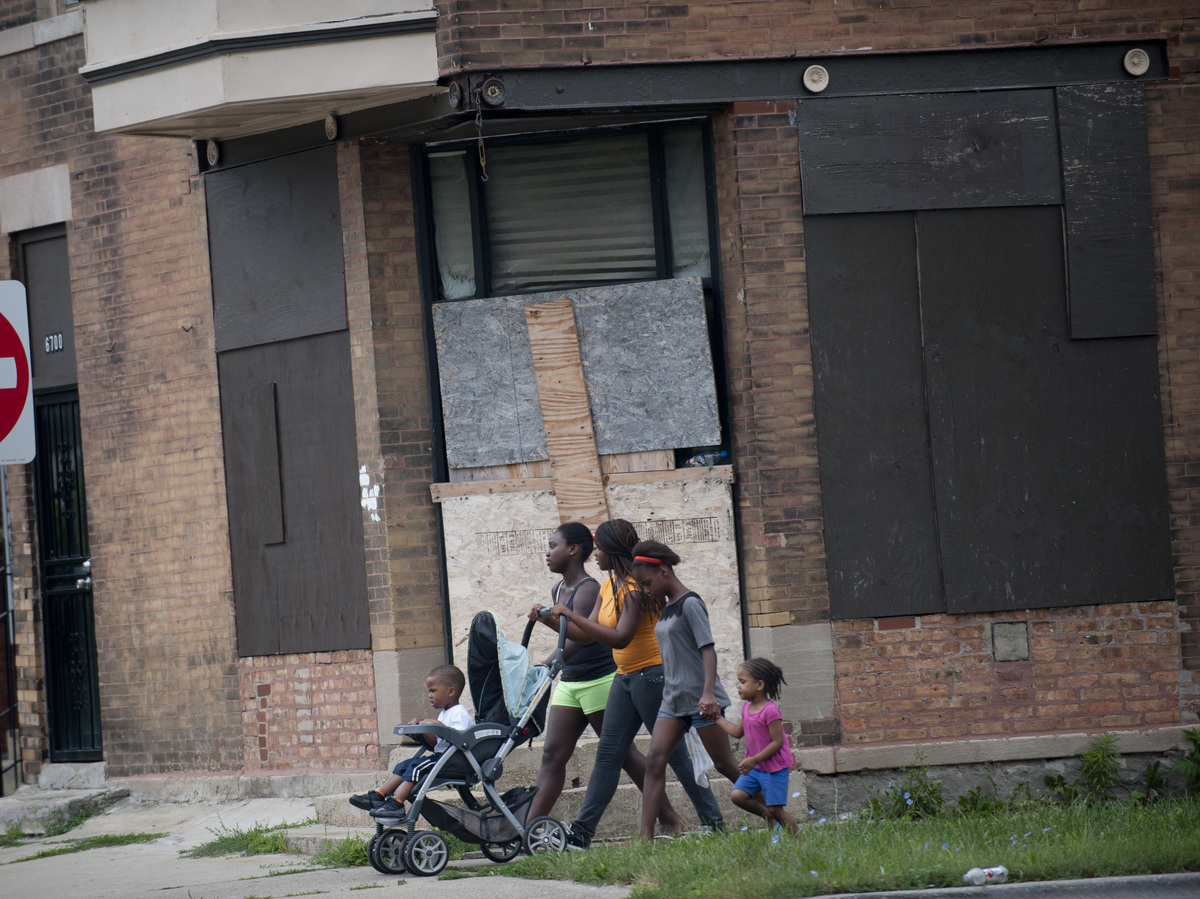 While other neighborhoods in Chicago have gentrified, the South Side has seen far less new investment — particularly from retailers.

There's a strong argument to be made that Chicago's South Side is the cultural capital of black America, a place that a far-reaching who's who of black luminaries have called home — Mahalia Jackson, Louis Armstrong, Ida B. Wells, Barack Obama. But even as the South Side has played a key role in the Great Migration, it was and continues to be shaped by entrenched segregation that has choked it off from resources and development.

In her new book, The South Side: A Portrait of Chicago and American Segregation, Natalie Y. Moore, a longtime reporter for WBEZ in Chicago and a native of the Chatham neighborhood on the South Side, digs into the ways that segregation continues to shape the politics of her hometown, as well as her own life.

(The following conversation has been edited for length and clarity.) 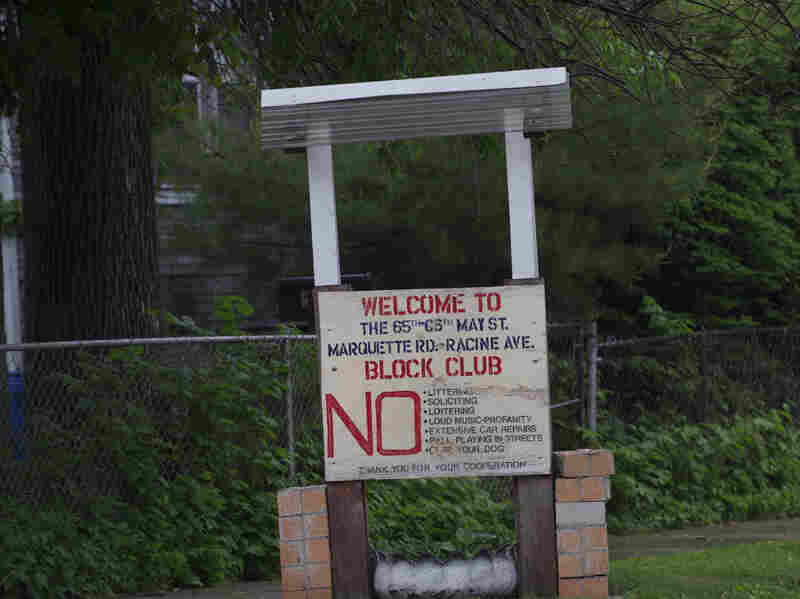 Block associations on the South Side have long pushed to make their neighborhoods cleaner and safer, but investment from developers and retailers has been slow to follow. Bill Healy/St. Martin's Press hide caption 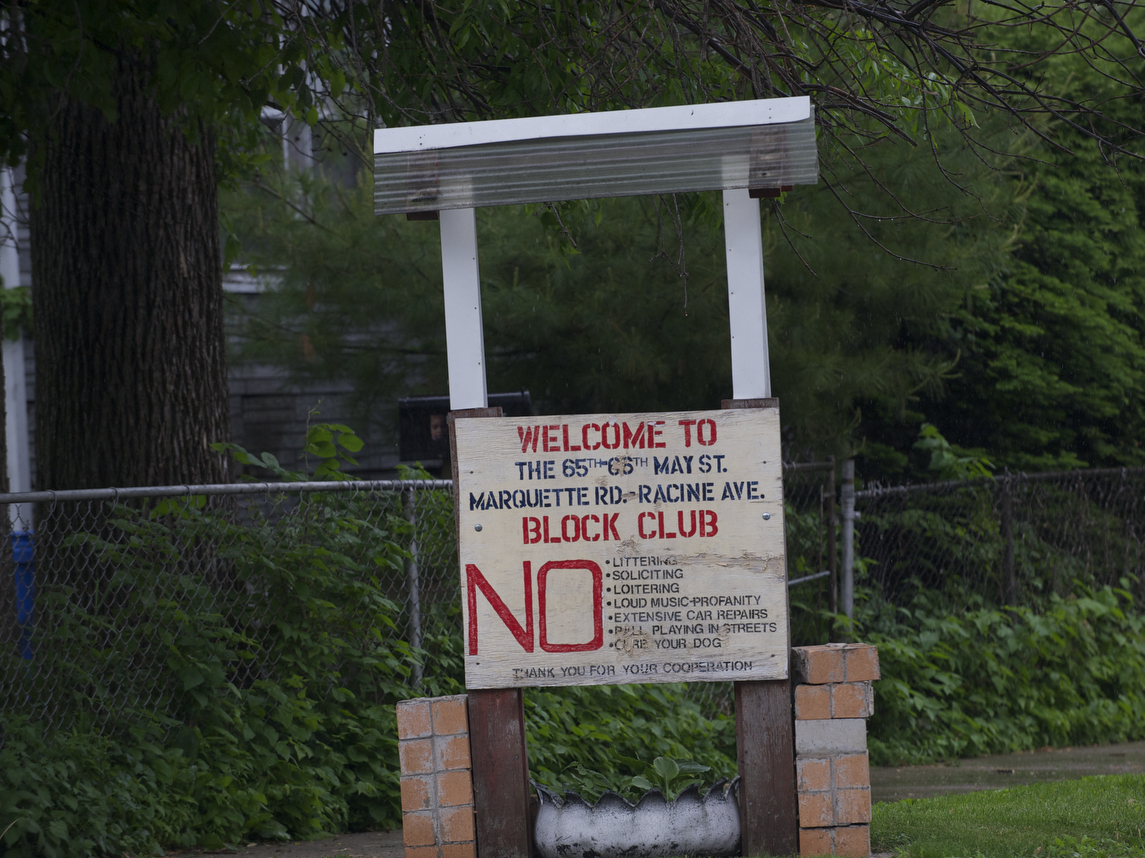 Block associations on the South Side have long pushed to make their neighborhoods cleaner and safer, but investment from developers and retailers has been slow to follow.

So this is complicated history, but could you explain how segregation in Chicago got so entrenched?

This is actually the 100th anniversary of the Great Migration. From 1916 to 1970, 500,000 blacks moved to Chicago. The black population here at the start was around 43,000 and by the end it was around 1 million. As soon as black migrants came here, real estate forces conspired to keep them contained.

A lot of people may remember The Black Belt, but the Black Belt had to expand because the population kept growing. But at the same time, blacks couldn't live in other places here. The real estate commission adopted language that endorsed racially restrictive covenants, which said that a white person could not sell or lease their property to a black person. These were written into the deeds.

Homeowner improvement associations enforced those [covenants]. And you had institutions like the University of Chicago that supported those associations. And then on the federal level, you had redlining. This was not unique to Chicago — you had this playing out all over the country, particularly in the Midwest.

In 1948, racially restrictive covenants were actually struck down by the Supreme Court. But the precursor to that case was actually in Chicago, in Hansberry vs. Lee — and that was Lorraine Hansberry's father. [Lorraine Hansberry wrote Raisin in the Sun, an explosive 1959 play about a poor black family struggling to make it on Chicago's South Side.]

In Chicago, most people don't know the story of the Hansberrys. In 1937, Carl Hansberry bought a house in West Woodlawn, which is a white neighborhood just south of the University of Chicago. And a woman named Anna Lee, who was white, protested and said: "You're not supposed to be here. We have covenants."

That makes A Raisin In The Sun read so much differently, now that I know her father was at the center of this case.

The whites in the neighborhood threw bricks at the home, and one of those bricks almost hit 8-year-old Lorraine.

And now that we know that the character Karl Linder was supposed to represent the white homeowners association!

That play is about a family, not about restrictive covenants, but the way that she wrote it is much milder than it played out in her family life. When they moved in, her mother had to patrol the house at night with a shotgun. The whites in the neighborhood threw bricks at the home, and one of those bricks almost hit 8-year-old Lorraine.

But the Illinois courts agreed with Anna Lee and the other white homeowners that the Hansberrys didn't belong and had to move. But Carl Hansberry was a savvy businessman, and he liked to sue the federal government, and he wasn't going to accept this decision.

So in 1940, this went to the Supreme Court and the Hansberrys won, but not because the court decided discrimination was bad. It was on a technicality — the court ruled that the white homeowners didn't have enough signatures. So what happened next was white flight — about 500 homes opened up in the West Woodlawn area. And that affects my family because my grandparents on my mother's side moved here after World War II and they moved to West Woodlawn. By the time they got here, the covenants were about to be lifted, so you had black migration to other South Side neighborhoods that had been all white. In 1950, 100 percent white, and by 1970 it was 0.2 percent white. 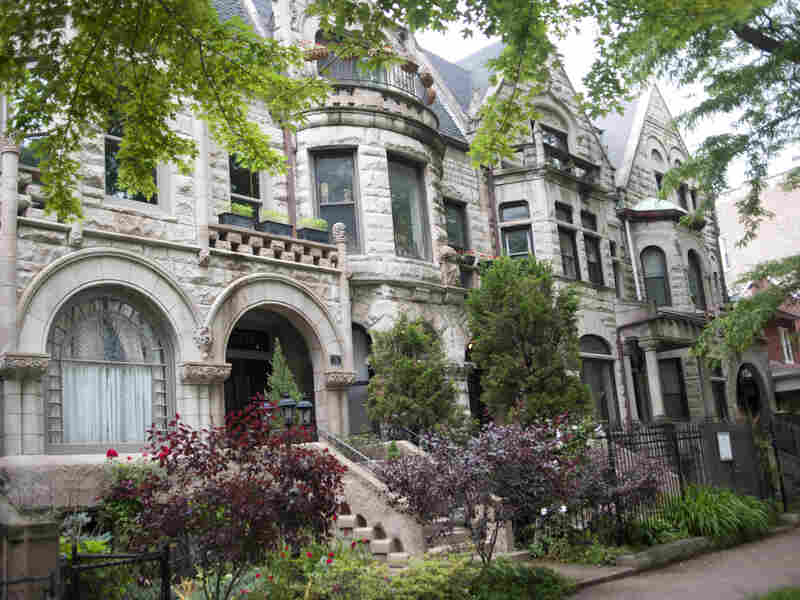 Moore writes that middle-class neighborhoods like those on the South Side aren't ghettos, but they are precarious — "They exist because of segregationist housing policies designed to create ghettos" — and have higher crime and poverty rates and proximity to underperforming schools. Bill Healy/St. Martin's Press hide caption

What's disheartening about this is, our country has decided that the way you build wealth is through homeownership. And there have been all these wrenches that have been thrown at black people as soon as they came to the North.

Your own story of homeownership in the South Side of Chicago is a good illustration of this. You wrote that you bought your condo in Bronzeville in 2008 for $175,000 and watched it depreciate in five years — it lost more than two-thirds of its value. By 2013, it was worth $55,000. You say in that same chapter that there was this influx of black professionals who were buying in that neighborhood because they thought there was going to be this big resurgence in development. But it never came.

It's very vexing. On one hand, maybe the expectations were too high. I joke that folks were waiting for the artisan olive oil shop to come. But a lot of people continue to work in the neighborhood, beyond block clubs. And there has been improvement — the UIC data shows that the neighborhood has improved, but it hasn't gentrified. It may seem simplisitic to say race, because there's still a large population of lower income residents in the neighborhood. It's a mixed-income community. But you know, it's taken 20 years for a new grocery store to be built.

There were no grocery stores in Bronzeville before?

There was one, but everyone tells you not to shop there as soon as you move in. But we're talking about a pretty big geographic area, and one of the complaints has always been that there needs to be more retail. Bronzeville people — at least the middle class people who have cars — we all leave the neighborhood to grocery shop.

No, it doesn't. Steve Bogira, a great journalist at the Chicago Reader, wrote in the 2011 election that this is the mayoral issue that should be talked about. And then he did it again in 2015 [laughs]. And what you hear will be pretty boilerplate. You know, from Chicago Public Schools: "We want a quality education for every child."

I'm glad you brought up schools, since that seems to be where the rubber hits the road when it comes to policy around race and integration. What is the makeup of the Chicago Public Schools?

It's mostly Latino, followed by black, and it's about 9 percent white. I actually did a story about this for WBEZ not long ago. So Chicago is about a third, a third, a third: black, white and Latino. So I had assumed that one-third white would include young people, but it doesn't. There actually aren't many school-age white people in the city to begin with.

I see this anecdotally: a white couple moves to the city, and by the time they're ready to start a family, they move to the suburbs. Half of the eligible white, school-age children — I looked at ages 5 to 18 — who are in the city do go to the public schools, though.

I think there are a lot of missed opportunities in Chicago Public Schools. This has been a big story in the news, but white parents don't send their kids to majority-black schools in the city.

You make the point early on, jokingly, that you're a black gentrifier to Bronzeville, a black neighborhood on the South Side, and then you proceed to show all the ways that an influx of middle-class black people can't gentrify a neighborhood.

Yeah. Technically, it is class — where you have displacement and replacement. So in Bronzeville, you had displacement of low-income people with the demolition of the high-rise housing projects, but all that land sat empty. There was no replacement. All that land is empty. You know Robert Sampson, you've blogged about his study. (In Chicago, Neighborhoods That Are More Black Don't Gentrify.) They're all saying the same thing. But [gentrification] is just shorthand for development, good or bad, and the uncertainty. So yeah, we often misuse "gentrification," particularly in Chicago. Yes, there are neighborhoods that are gentrifying, but that's not exactly what's happening. What you're seeing is the hollowing out of the middle class.

Because there's been such depopulation in black neighborhoods, there's a way to add a population without displacing people. There are ways you can be pushed out in different ways — maybe your taxes are too high or you have a speculator who comes and wants to buy your home. But there's enough land for everybody.

I actually came out of this process feeling more optimistic because there is a roadmap. There's no one solution, but I think there are a lot of things that can be looked at to remediate some of these problems. Some are low-hanging fruit. Some are way more lofty. I think trying to get regional government would be hard. But there are examples — the Twin Cities has been noted for planning well, for thinking about housing and thinking about schools.

You know, there are things that can be done to open up choice to people. One example ... if you're a developer, if you build an apartment building and you receive some sort of city assistance, whether that's land or something else, you have to commit to 10 percent of your units as affordable housing. So either you build the 10 percent, or you pay into a fund. But the developers here routinely opt to pay into a fund rather than provide affordable housing. So we mapped out where those buildings were. They weren't on the South and West side — they were in the richest, most exclusive areas in the city that were also considered opportunity areas.

So you have money for development going to places where there's already plenty of money.

Right. But there are things like that, that could help, but the language could be stronger so developers can't weasel out of that.

Natalie Moore's book, The South Side: A Portrait of Chicago and American Segregation, is out this month from St. Martin's Press. Follow her on Twitter.