Accessibility links
Reflecting On The Death Of Freddie Gray, One Year Later : Code Switch A year ago, 25-year-old Freddie Gray died of injuries he sustained while in police custody. His family, neighborhood and the whole of Baltimore are still grappling with his loss. 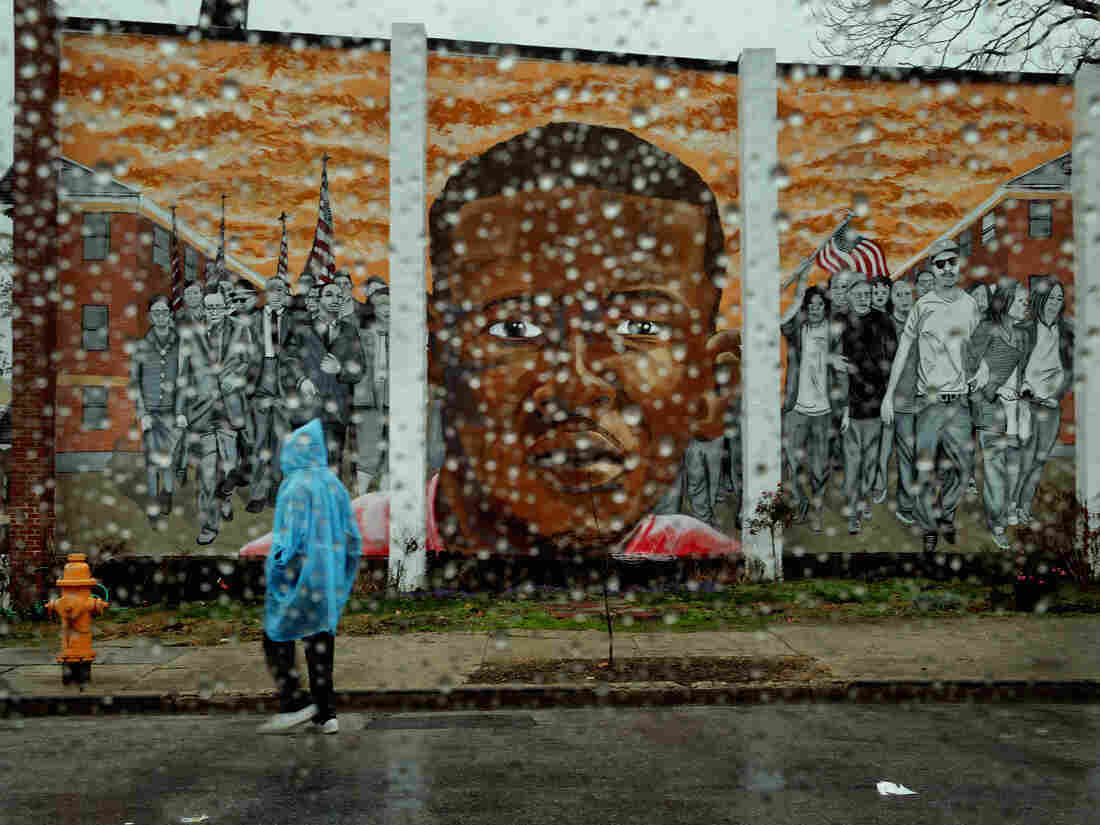 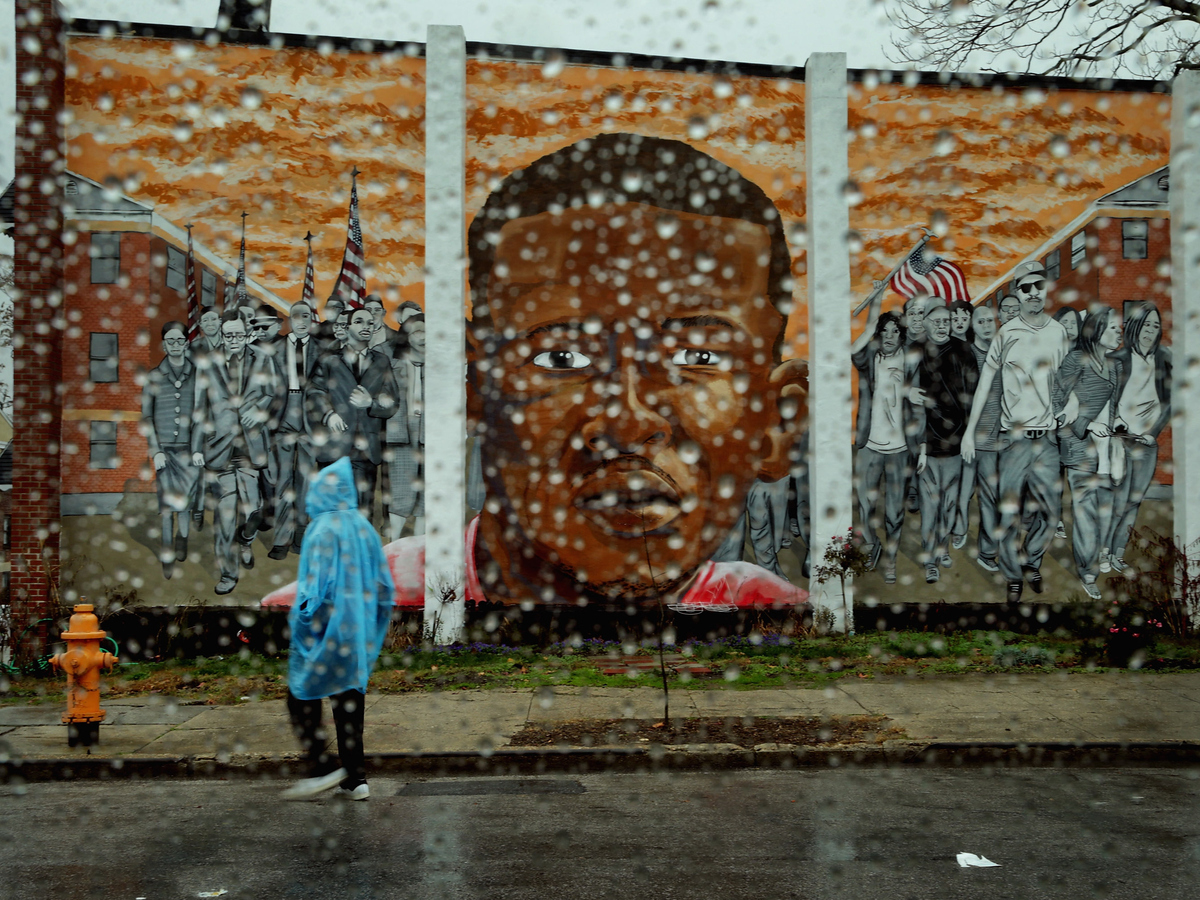 It has been a year since Freddie Gray died from injuries sustained as Baltimore police transported him to a station. The 25-year-old was arrested after running from police; officers later found a small knife in Gray's possession. Cellphone video of the arrest showed Gray being dragged, moaning in pain, to the police van while at least one onlooker shouted that Gray needed medical care. Gray was not secured in the back of the van, which led to 80 percent of his spine being severed. The Baltimore Sun has a comprehensive timeline of the investigation into his death and the status of legal cases against the officers involved.

This week, journalists, commentators and community members are reflecting on what Gray's death has meant for the city and what it might mean going forward.

Karen Houppert at the Baltimore City Paper writes that the stop-and-start legal process for the police who are charged in the case mirrors the pace of progress across the community:

"The city, too, is in a holding pattern, still reeling from Gray's death and the ensuing uprising and riot. The national press that descended on Baltimore during an upswell of protests over police brutality has packed up its bags, its cameras and microphones, its drive-by reports on the city and gone home.

"But it is not business-as-usual in Baltimore.

"Gray's death sparked a movement among residents, many of whom are determined to contextualize his death by demanding reform in police practices, by looking at the legacy of redlining and residential segregation, by considering the uptick in the homicide rate (a record 344 murders last year), by questioning entrenched racism, by pointing out disparities in economic opportunities, by drawing attention to issues like disproportionate minority confinement in our prisons, by condemning the differences in educational attainment among the rich and poor or black and white students, by tying our racist history to our fraught present."

Gray's death and the aftermath have already changed the city's political landscape. Anthony Batts, the police commissioner at the time, was fired; Mayor Stephanie Rawlings-Blake decided not to run for another term, sparking a crowded field of candidates to run for that office. The Rev. Jamal Bryant, the politically influential Baltimore pastor who delivered the eulogy at Freddie Gray's funeral, was interviewed on NPR's Morning Edition. He said that, despite the uproar, progress in addressing issues like poverty and police reform has been "very slow, almost at a snail's pace":

1 Year After Freddie Gray's Death, Baltimore Is Still In Turmoil

"And that's why our local election is so important as we elect a new mayor, a senator and city council, because we don't want promises. We want to hear a plan ...

"... The reality is we're still dealing with joblessness and lack of opportunity and really subpar education. So policing is important, but there are many different variables that play a role in what happened for the uprising in Baltimore a year ago."

At The Baltimore Sun, Mary Carole McCauley and Wesley Case write about how art and activism have been critical in the community's quest to process the tragedy:

"To local artists, it has felt vitally necessary to form the roiling muck of thoughts and feelings generated by the death of the 25-year-old man and by the subsequent confrontation between police officers and brick-wielding citizens into something that makes sense, into poetry or a sculpture or a melodic phrase. The words and pictures were so vivid and insistent that they practically shoved their way out. They almost demanded that the artists sit down — not tomorrow, but right now — and let them emerge...

" '[Gray's] death became a symbol for all the frustration that people had been feeling for a long time,' [Loyola University Professor Karsonya Wise Whitehead] said. 'Freddie Gray was one of our own, and it became very important to name what was happening in our city. All that tension came to a head, and the only way it could be expressed was by writing a song or throwing a rock.'"

Reporting from Baltimore, USA Today's Melanie Eversley writes that the city is full of informal memorials honoring Gray and marking the anniversary:

"One year after Freddie Gray died after being stuffed into the back of a police van, street art and murals punctuate almost every block in the neighborhood where he died. Some of the colorful pieces are huge and elaborate, some small and simple. Some encourage peace. Some promote rebellion.

"Together, they paint a picture of a city trying to come to grips with itself. Gray, a 25-year-old black man, has come to symbolize a national struggle of sorts between police and young black men."

Eversley allows that "in some ways, life has changed" in Baltimore since Gray's death. She points to police department initiatives like new van cameras as evidence. Still, she says that "one thing remains the same: The tense relations between the cops and the impoverished city neighborhoods where Gray grew up."

Sheryl Gay Stolberg and John Eligon of The New York Times have been covering stories from Baltimore over the past year. They discussed the atmosphere in the city in the days preceding the anniversary. Stolberg seemed cautiously hopeful:

"... Two things strike me: the intense love that people [in Baltimore] have for the city, and their true desire to pull together and make it a better place. I think the anniversaries will indeed be difficult and painful. But many people in Baltimore have been engaged in some deep soul-searching since Freddie Gray's death, so I think this will also be a time for important reflection. Some points worth making:

"First, the mood. I was talking to David Jaros, a law professor, today; he described the city as 'grudgingly, slowly moving forward.' I think that's about right. In some ways, little has changed since Freddie Gray's death. Baltimore still faces the deep-seated challenges — dilapidated housing, high rates of joblessness among young black people, violent crime — that created the climate that led to violence. But in other ways, a whole lot has changed, because Baltimore's mind-set has changed. Freddie Gray's death was a real awakening, and I see glimmers of hope throughout Baltimore.

"Second, preparations for unrest. Many people warned of another round of unrest during the trial of Officer William Porter, who was one of six officers charged in Mr. Gray's death. His trial ended in December in a hung jury. The city was peaceful — I was not surprised by that; I always thought the violence of last April was a boiling over, an aberration — and I think most people expect Baltimore to continue to be peaceful during this period of anniversaries. Still, the police say they are prepared for any eventuality."

Baynard Woods of The Guardian writes that though there have been "modest changes to both policies and practices" at the Baltimore Police Department, in practice, these changes can be "fragile." He talked to Shaun Young, a Baltimore resident who became famous for disrupting a CNN broadcast during an early protest, about how these changes have actually played out:

" 'It's the same politics, the same policies being enforced, it's a different enforcer. What policies have changed? Now you get in the paddy wagon they're gonna buckle you up,' [Young] said ..."

Back at The Baltimore Sun, Kevin Rector compares Freddie Gray's death and the reactions to it to similar events that happened in Baltimore more than 50 years ago. He notes that while mayoral candidates, city boosters, community groups, and state lawmakers "have promised that things will finally change," such promises ring hollow in the wake of decades of structural inequality. Rector spoke to one academic who tried to give a bit of perspective:

"Lawrence Brown, an assistant professor of public health at Morgan State University, said the response to Gray's death has failed to address the 'whole architecture of how we got here.'

" 'We're not thinking about making neighborhoods sustainable. We're not thinking about creating neighborhoods of advantage. We're leaving that entire architecture intact because we're not investing in these redlined, disadvantaged black communities. That's what's missing,' Brown said. 'So yeah, we'll be back here in another 40, 50, 60 years with another uprising, because it's all still in place.' "