Accessibility links
'Awoken' By N.Y. Cop Shooting, Asian-American Activists Chart Way Forward : Code Switch Peter Liang, who is Chinese-American, was sentenced to probation for the shooting death of an unarmed black man. The ex-NYPD officer's case has sparked activism and debate among Asian-Americans. 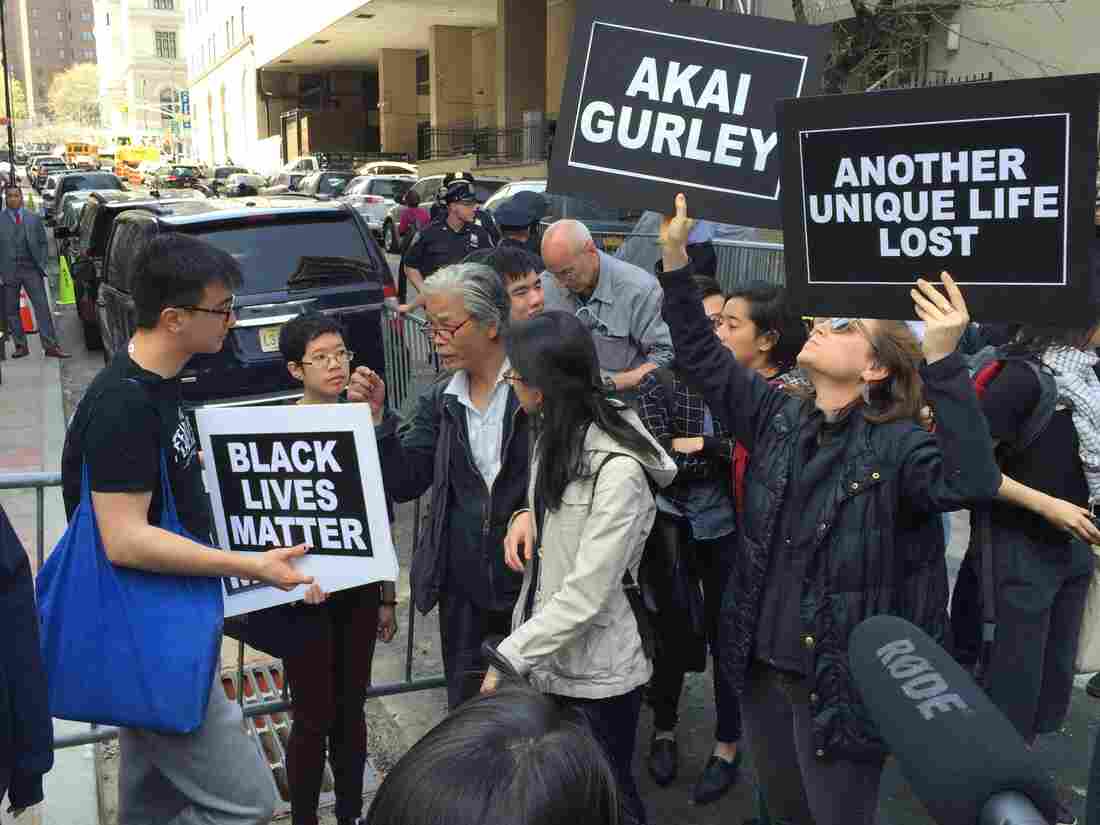 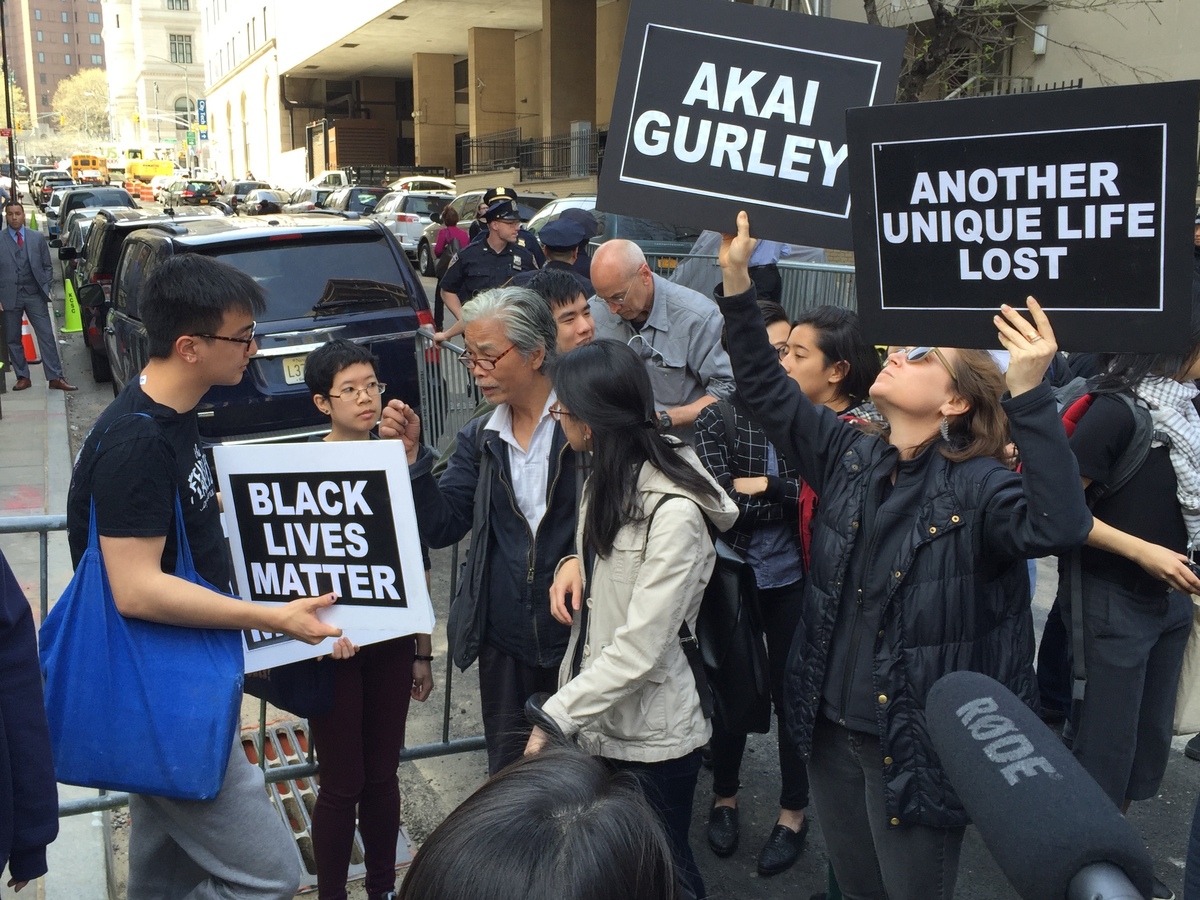 The lines were stark outside the courthouse.

A bustling street in downtown Brooklyn, N.Y., separated two groups. Each was fenced in by stone-faced police officers and steel barricades: an Asian-American community divided by Tuesday's sentencing of 28-year-old Peter Liang, the son of Chinese immigrants.

On one side, a group of mainly Chinese-American protesters held up poster boards declaring "Racist Prosecution!" and "Peter Liang Deserves Justice too!" in black marker.

On the other, a racially mixed group of activists that included Asian-Americans lifted "Black Lives Matter" signs, both in English and Chinese.

Ex-NYPD Officer Gets Probation In Fatal Shooting Of Unarmed Man

Ex-NYPD Officer Gets Probation In Fatal Shooting Of Unarmed Man 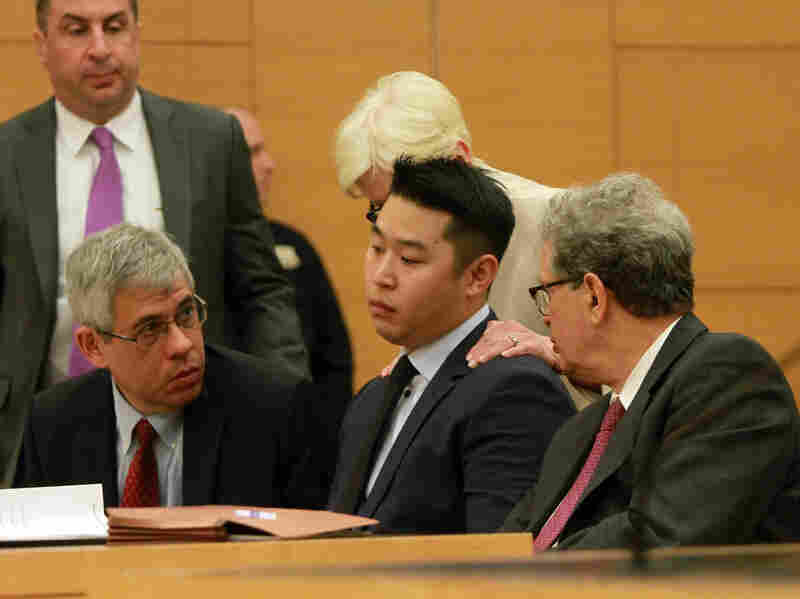 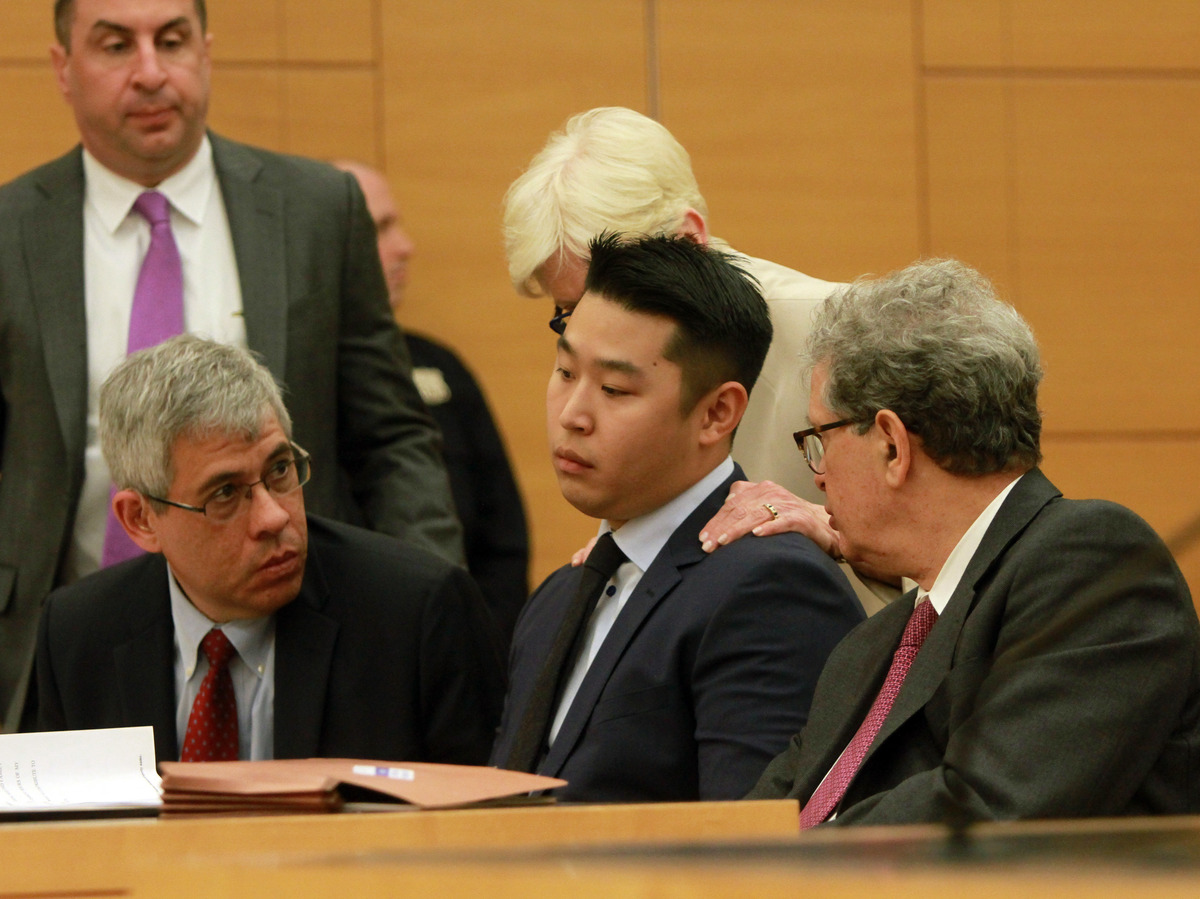 Peter Liang sits with his attorneys for his sentencing at Kings County Supreme Court in Brooklyn, N.Y.

This case began in a dark stairwell of a public housing development in November 2014. About 18 months after graduating from the New York City Police Academy, Liang fired his gun from the eighth floor while on patrol. Akai Gurley, 28, an unarmed, African-American father of a 2-year-old girl, was walking down the stairs when the bullet ricocheted off a wall and pierced his heart. As Gurley lay in a pool of his blood on the fifth-floor landing with a friend trying to revive him, Liang passed by without offering help. Gurley was pronounced dead at a local hospital soon after.

Less than three months later, Liang became one of the few police officers to be indicted in a shooting case. In February, a jury found the former New York City police officer guilty of manslaughter and official misconduct. This week, Justice Danny Chun reduced his manslaughter charge to criminally negligent homicide, and sentenced him to five years of probation with 800 hours of community service. Prosecutors say they will appeal the reduced conviction, and Liang's attorneys are planning to appeal the case, too.

Liang's sentencing marks a culmination of almost a year and a half of fissures among Asian-Americans. Many have taken to the streets in New York City and in other major cities around the country in support of Liang, while others have rallied around Gurley's family.

"It's a wake-up call," says Erika Lee, a University of Minnesota history professor and author of The Making of Asian America. Lee says Liang's case has mobilized a level of Asian-American activism not seen since the 1992 Los Angeles riots and the 1982 killing of Vincent Chin in a Detroit suburb.

The debate about Liang's case comes from a long history of different kinds of activism by the Asian-American community, Lee argues. "There are these two traditions of Asian-Americans both acting for ethnic-specific causes and issues as well as joining others, especially since the 1960s," she says.

In her book, Lee highlights protests during World War II by Japanese-American "no-no boys" who, after being forced to live in internment camps, refused to comply with the military draft and loyalty questionnaires that discriminated against U.S. citizens of Japanese ancestry. She also writes about other Asian-American activists, like Yuri Kochiyama and Grace Lee Boggs, who were "among those who got their start in the African-American civil rights movement." 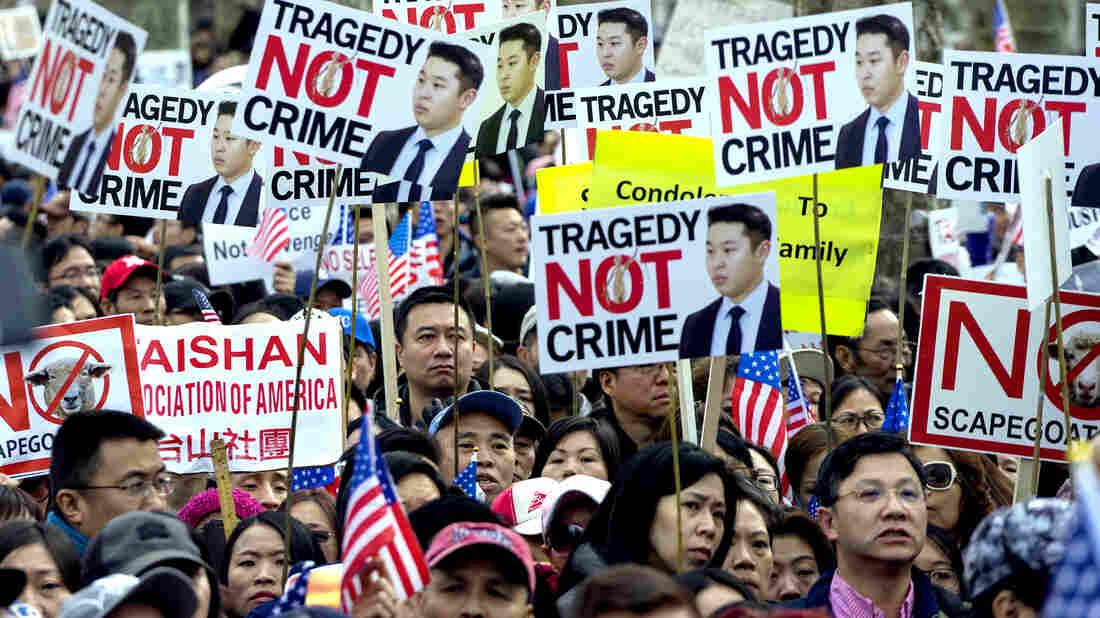 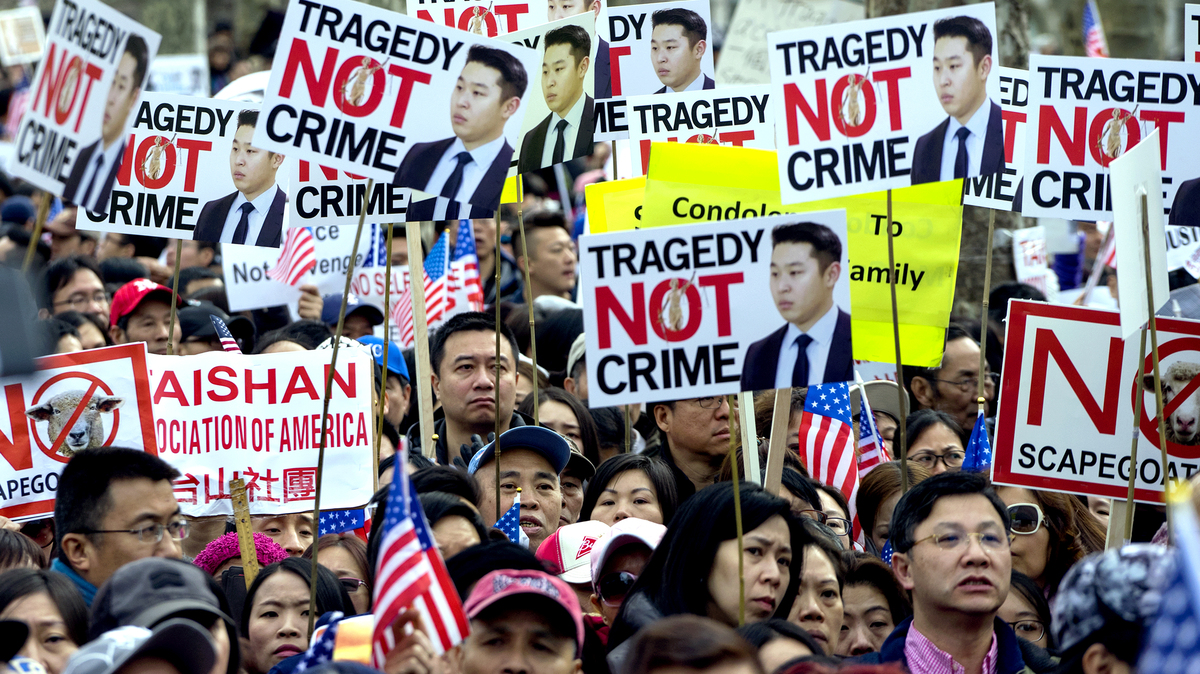 Protesters attend a rally in support of Peter Liang on Feb. 20 in Brooklyn, N.Y.

Is Liang A 'Scapegoat'?

Many Asian-American activists supporting Liang ask why he was put on trial when so many white officers have not been charged in other police-involved deaths of black men. They also question whether Liang has received enough support from a predominantly white police department and officers' union.

"We've seen bureaucracy, corruption and lots of shirking of responsibility that have led to Peter Liang becoming a scapegoat," Jerry Lo of Long Island said in Cantonese, as he stood with other Chinese-American protesters across from the Kings County Supreme Court after the sentencing.

Laura Lam of Manhattan arrived outside the courthouse two hours before the sentencing was scheduled to begin to join other Liang supporters. She chafed at the suggestion that her support for Liang has anything to do with race. "Don't bring race into it. It should be very pure. It's about justice only," Lam said in Cantonese, adding that she's heartbroken that an innocent man has died and a young cop's career has been cut short. "I feel very sad. It's bad for both sides."

She said that Liang should not have been charged. Instead, Lam put most of the blame on the NYPD for sending Liang with another rookie cop to patrol the Louis H. Pink Houses, as well as the public housing development's management for not making sure the stairwell was properly lit at night. It's hard for her to understand, she said, why anybody, especially Asian-Americans, would blame Liang for what she sees as an accident.

'Not Just A Black Person's Struggle'

Across the street, standing among Gurley supporters, Ting Lin of Brooklyn said she also doesn't think Liang's race should play a role in this debate. "I'm not saying that it's OK for the white cops to get away. But I just think that he did something wrong and he should be held accountable for it," explained the college student. 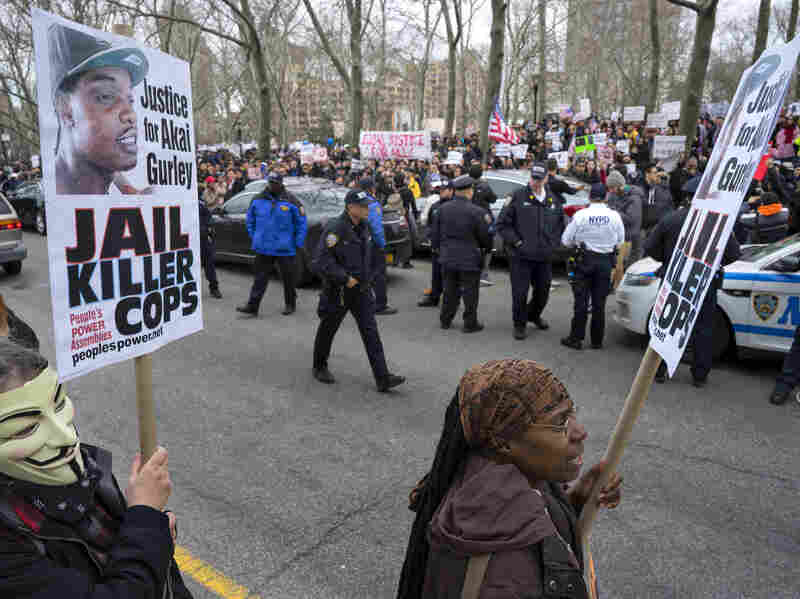 A group of counterprotesters stand across the street from hundreds of protesters attending a rally supporting Peter Liang on Feb. 20 in Brooklyn, N.Y. Craig Ruttle/AP hide caption 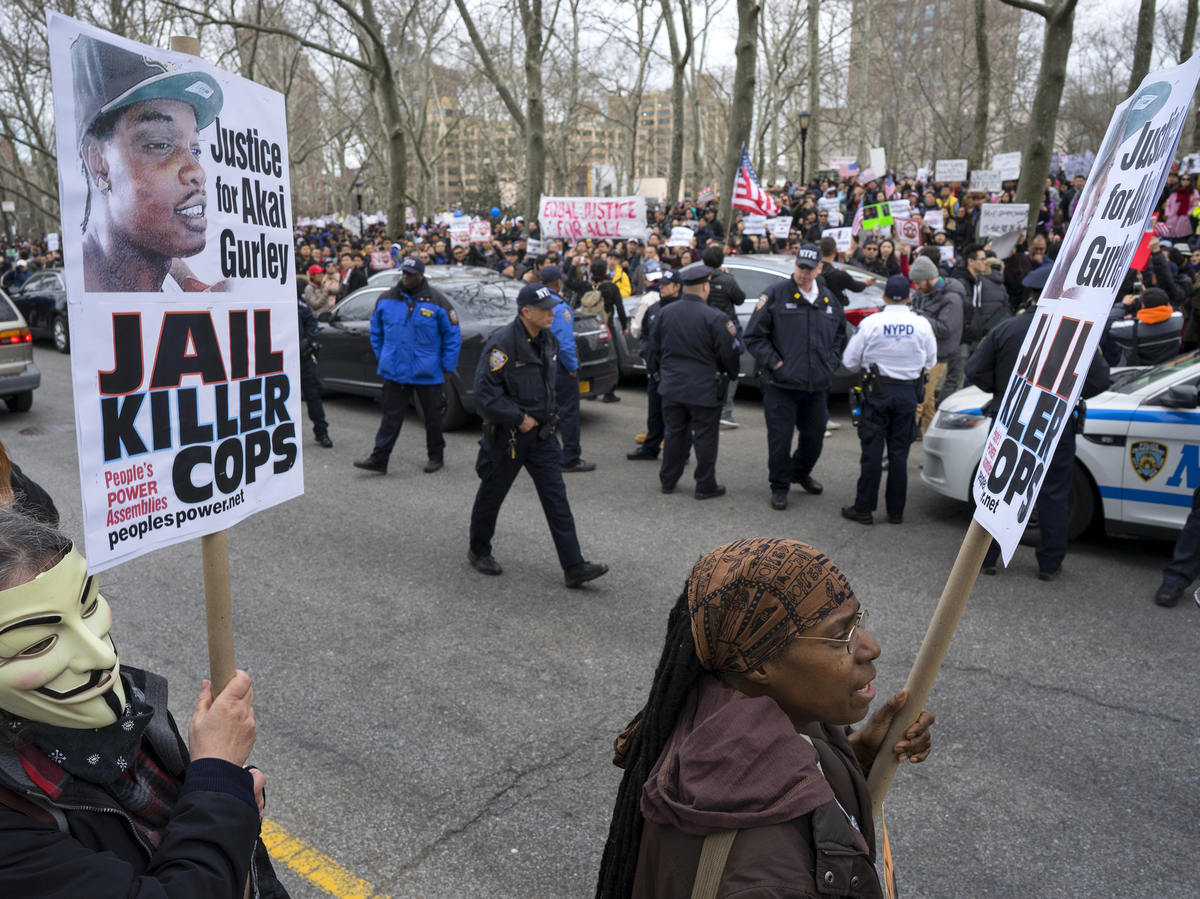 A group of counterprotesters stand across the street from hundreds of protesters attending a rally supporting Peter Liang on Feb. 20 in Brooklyn, N.Y.

Lin said she's seen posters in her neighborhood asking for donations to fund Liang's legal fees for appealing his case, and she wanted to publicly support the Gurley family's efforts to hold police accountable. "I feel like blacks and Asians should get together," she said. "I feel like it's not just a black person's struggle."

High school student Xuan Wang of Queens said Liang supporters should not see him as a victim and should instead rally around the Gurley family. "I think we, as East Asian-Americans, we have to acknowledge the anti-blackness within our own communities that does, in my belief, play a part in their support for Peter Liang," he said.

'You Have To Fight For Your Rights'

Wu Yiping helped organize many of the New York City rallies in support of Liang. He credited the protests by Liang's supporters around the U.S. for helping to bring about what many consider a light sentence. Liang received no jail time, but he could have been sent to prison for as long as 15 years for his original manslaughter conviction.

Wu argued that the sentence showed the importance of voting and participating in "mainstream society" in the U.S. "American society won't give you rights. You have to fight for your rights," Wu said in Mandarin.

He added that the way forward includes finding opportunities for the African-American and Chinese-American communities to better understand each other.

"The reason why there hasn't been that communication is because Chinese people are focused on their careers," he said. "And we don't think about doing other things." Wu suggested that Chinese restaurateurs and other business owners operating in African-American communities can do more to give back to the community.

"They should go into their churches, speak with them and try to understand what they need. We can even prepare free Chinese lunches for their children or donate money during the holidays," he said.

A 'Troubling Ebb And Flow'

Regardless of the ultimate outcome of the Liang case, there are questions about how long the political energy it generated within the Asian-American community, on both sides, can be sustained. Lee, the author of The Making of Asian America, says there's a "troubling ebb and flow" to activism by Asian-Americans, who are positioned in the U.S. racial hierarchy as "both victims and also protected from some of the harshest types of racial discrimination."

"We do have this privilege of not always having to pay attention to these issues, and then sometimes when it does hit our community hard, it's a very politicizing moment because it feels new," she adds. "We may be shocked into thinking this could happen to us, too, when we thought we might have been protected."

Lee says Asian-Americans are facing a "pivotal" moment as the country's fastest-growing racial group and that the group's demographics are changing in other ways, too. Many of the new immigrants from China are coming with higher levels of economic and political clout, and they may be better primed to get involved with causes than previous generations of working-class Chinese immigrants, Lee adds.

Still, the Liang case has not only exposed a growing range of opinions within the increasingly diverse Asian-American community. For some Asian-Americans, it has also re-energized a commitment to stand with other communities of color in solidarity.