Accessibility links
'Jane The Virgin' Narrator Anthony Mendez Had To Leave The Family Business To Find His Voice : Code Switch Anthony Mendez's role as Jane's unseen narrator has garnered him critical acclaim. But before Mendez was able to turn his voice into a career, he was selling tombstones for the family business. 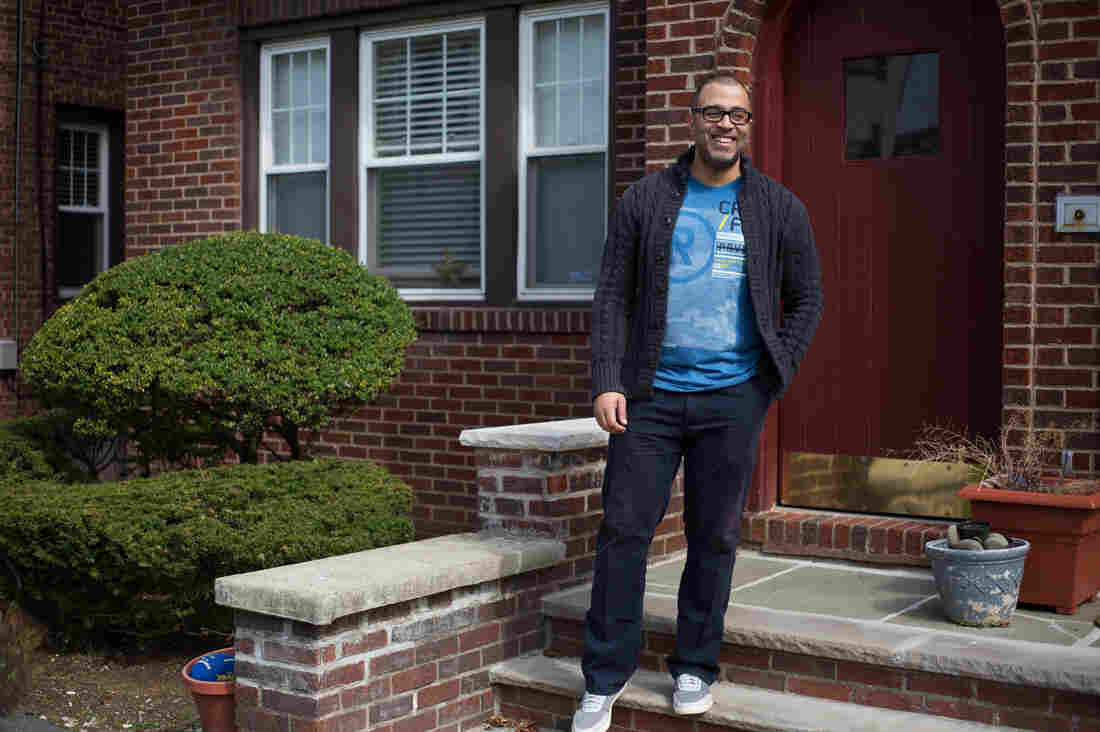 Anthony Mendez stands outside his home in Englewood, N.J. He got into voice acting after working for his family's tombstone business. Emily Bogle/NPR hide caption 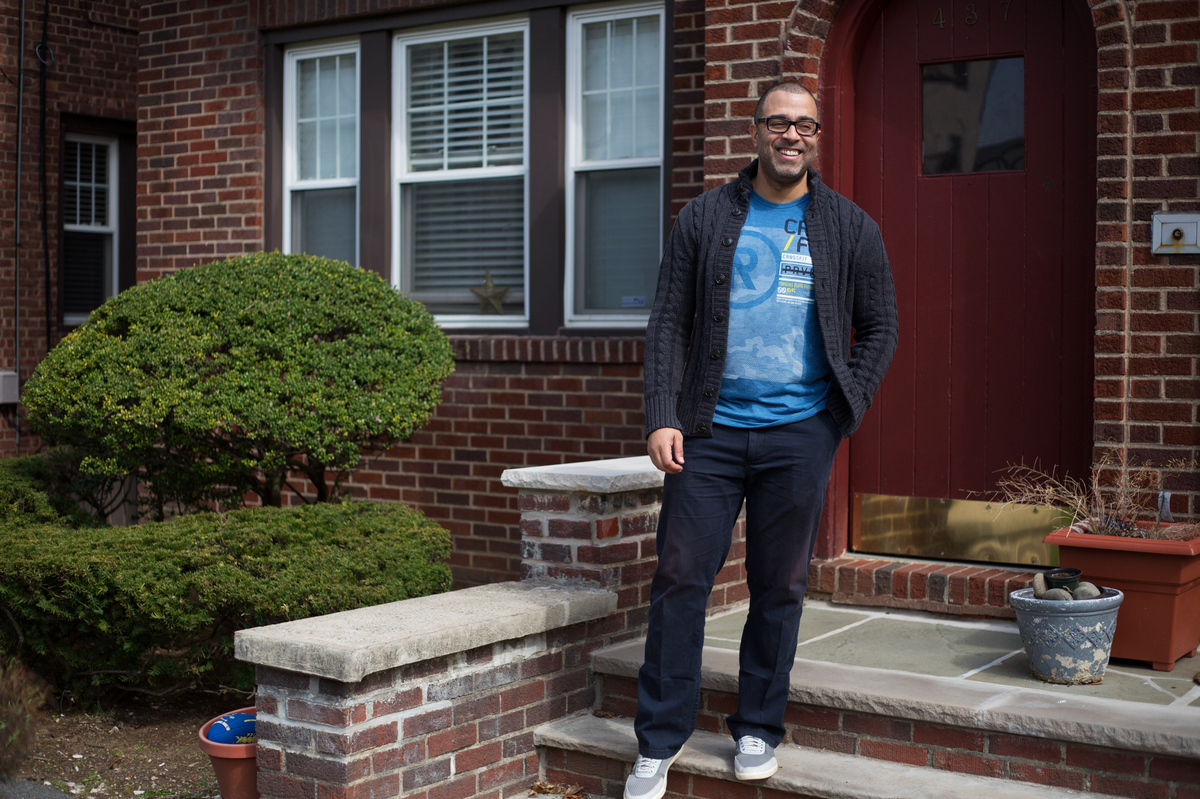 Anthony Mendez stands outside his home in Englewood, N.J. He got into voice acting after working for his family's tombstone business.

On a recent March morning at his home in a New Jersey suburb, Anthony Mendez was on his living room couch with his 9-year-old daughter. He was watching the previous night's episode of Jane the Virgin, studying his own performance as the show's unseen narrator.

This is the sort of thing Mendez says helps keep him grounded.

Still, Mendez's ability to turn an omniscient narrator into one of Jane's funniest characters has gotten him plenty of attention. He's been described by people as "the best thing about the show" and "one of the show's most entertaining characters," and is growing a small cult following on the Internet.

But Mendez's performance is unique from other narrator roles because of its comedic timing and punch. In an episode in which Jane goes to her high school reunion, Mendez's voice swoops in to introduce us to Stephanie Kovakovich, a mean girl who Jane used to beef with. A string of text — as if the narrator is typing it — appears on screen: Stephanie Kovakobitch. "Oops," the narrator apologizes, correcting his typing. "No, I meant it," he says, changing it back to Kovakobitch.

(Real-life Mendez is just as playful as his character. Before I arrive at his apartment, he posts a humble-braggy video to Snapchat and Instagram, in which he announces he has to clean his apartment before his NPR interview. The video pans to him nudging a plastic container under his bed.)

But his journey in finding this voice — one that encourages him to play with an accent instead of dampen it — came after years of career change and trying to fit himself to a mold.

A typical kid, Mendez loved comics. They fed his imagination and were a break from a more serious, less typical childhood: He sold headstones at the family business — and even designed a six-crypt mausoleum as he got older. Mendez's dad, who immigrated to the states from the Dominican Republic, worked in a tombstone factory before opening his own business, and hoped Mendez would take it over with his three other brothers.

But Mendez had other ideas. He studied architecture — the most creative major he thought he could get away with — for a short while at the New Jersey Institute of Technology. After that, he tried pursuing a career in producing reggae, struggling so much in the early 2000s he thought he'd be homeless.

"In your mind, you're like, 'No, I'm gonna show them, I'm gonna show them,' " Mendez recalls feeling about his parents, who hadn't wanted him to leave their business. "But, you know, it takes eight to 10 years to show them, so at the beginning when I was struggling, they said, 'Come back to the family business,' and I actually agreed to do it."

But Mendez said he had a nightmare that stopped him from returning. He dreamed he was trapped and anxious, working at a headstone factory forever. 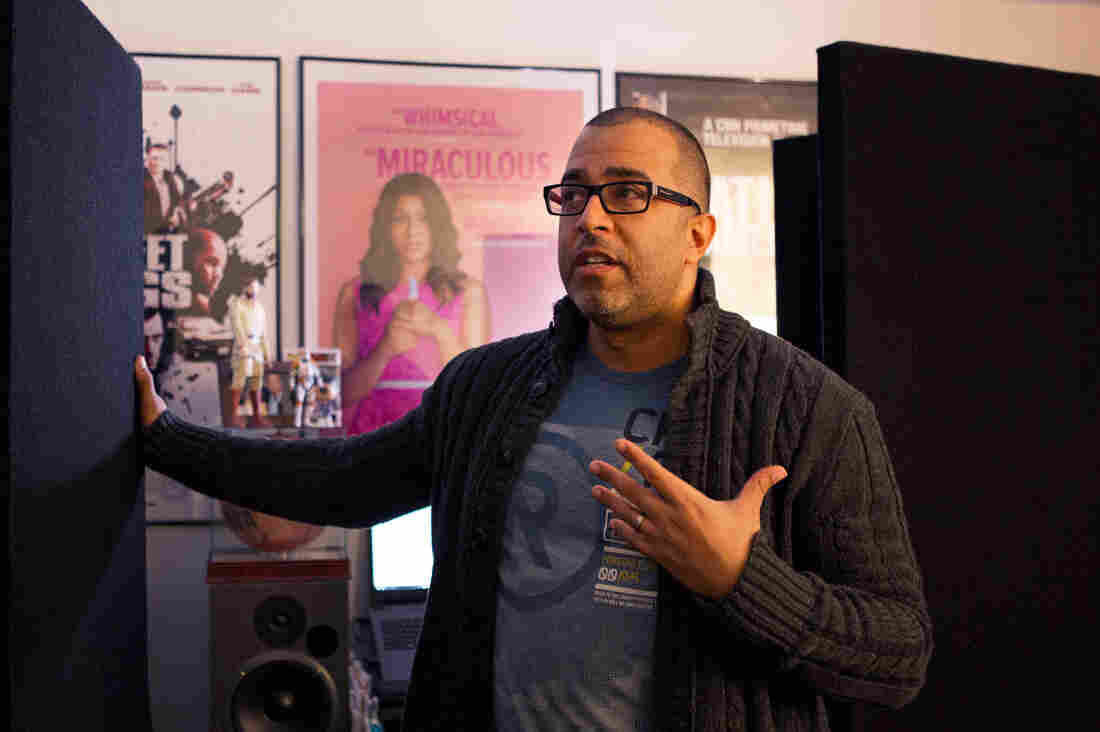 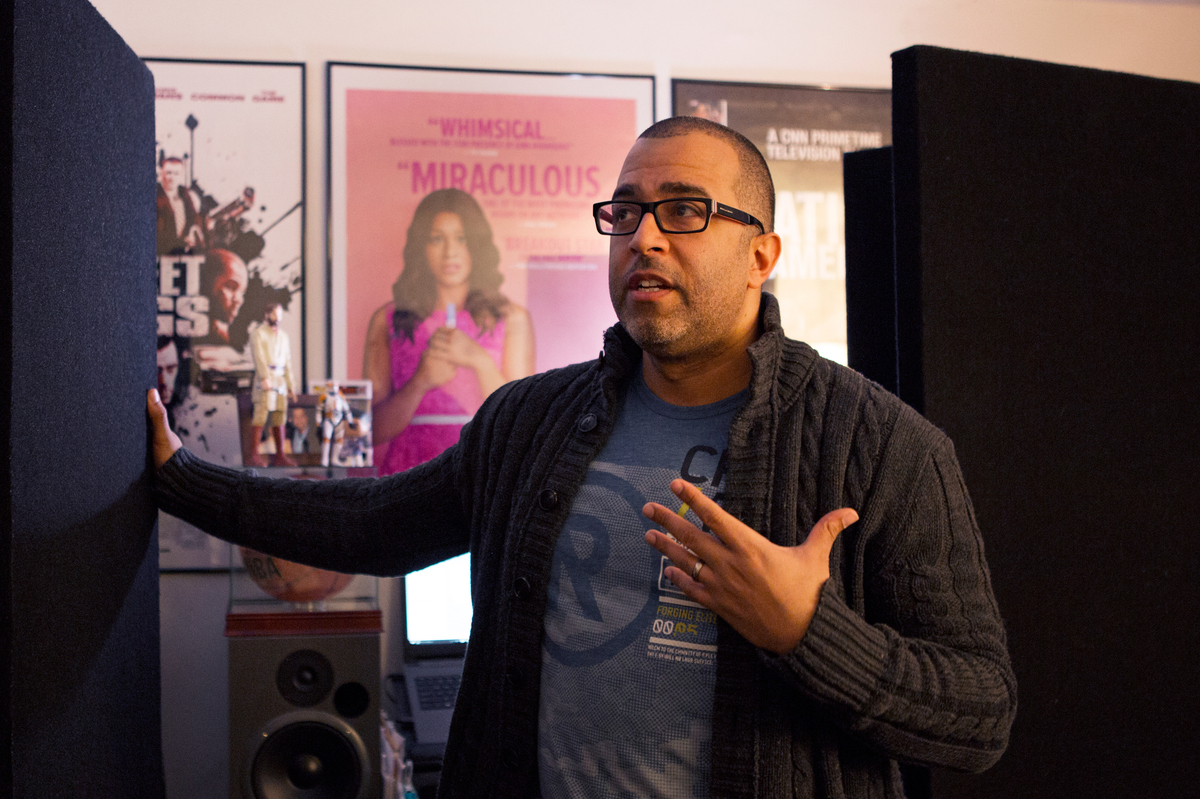 So he fell back on something he had all along: his voice. People always said there was a Mendez voice — his grandfather, his father, his brothers all had it — that was deep and booming.

"In high school when I would read in Spanish, especially, some of the girls would ask me to do it again ... and that kind of took me back, like, 'Huh, there's something there,' " Mendez says.

He signed up for voice-over classes and learned his Dominican-New York-New Jersey upbringing made things complicated. During one class, he'd just finished recording a track in the studio and his classmates were on the other side of the glass, observing. They thought he couldn't hear their reaction to his voice-over.

"You heard everyone in the room talking about, 'What accent is that?' where they had never heard someone in voice-over who had an urban, Latino, New York, New Jersey mixture. So they were like, 'That's urban. That's urban,' " Mendez says. This insistence on labeling him one thing — which he's written about before — was an issue he ran into with talent managers, too. He was sent African-American voice-over roles and Spanish-speaking ones, but rarely received ones meant for the general market.

"[Managers] were like, 'Oh, you've got an accent. You're not gonna do it,' " Mendez says. His goal was to learn to talk without his accent but not lose it entirely.

So in his makeshift studio, in the bedroom he shares with his wife, recording out of a small closet that's lined with board games and books to absorb the sound, he created a workout he calls VO 90 X — like boot camp for your voice — with which he spent 30 minutes daily for 90 days, intensely working on sounds.

And it worked. Mendez began booking gigs with brands like CNN, Miller Lite and Target, lending his voice to ads in both Spanish and English.

A few years ago, he got an email invitation to audition for a TV show — Jane the Virgin. 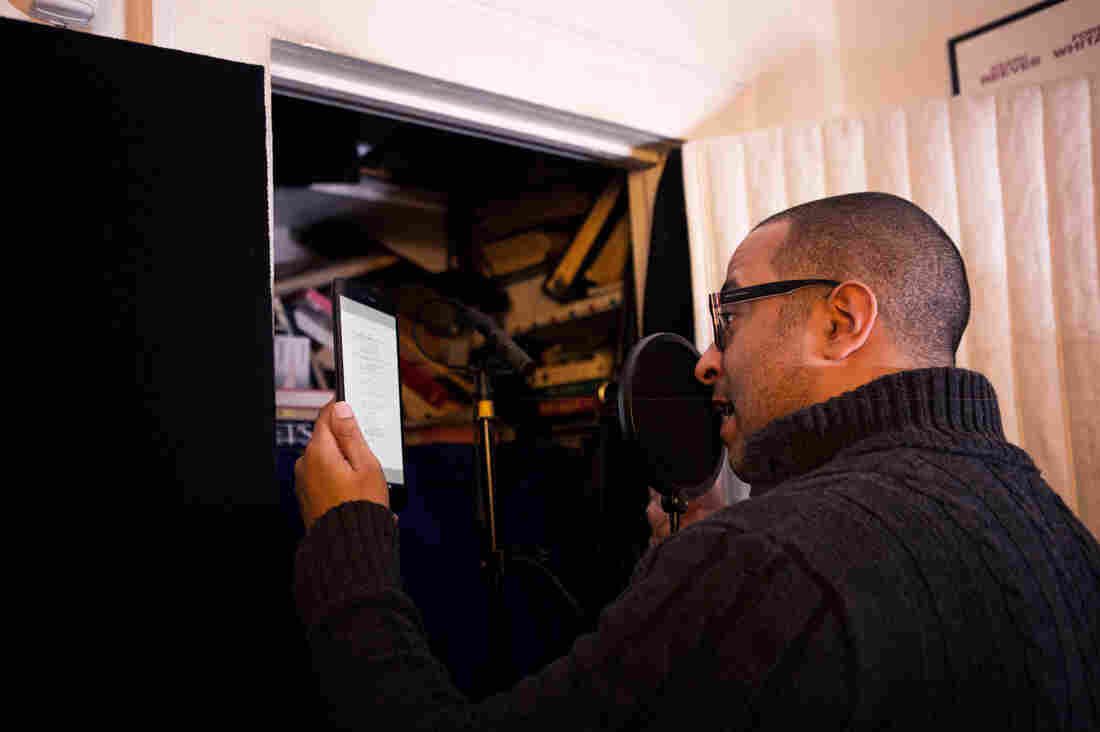 Mendez reads from a Jane the Virgin script in his bedroom recording studio. He records his voice-overs mostly from his home. Emily Bogle/NPR hide caption 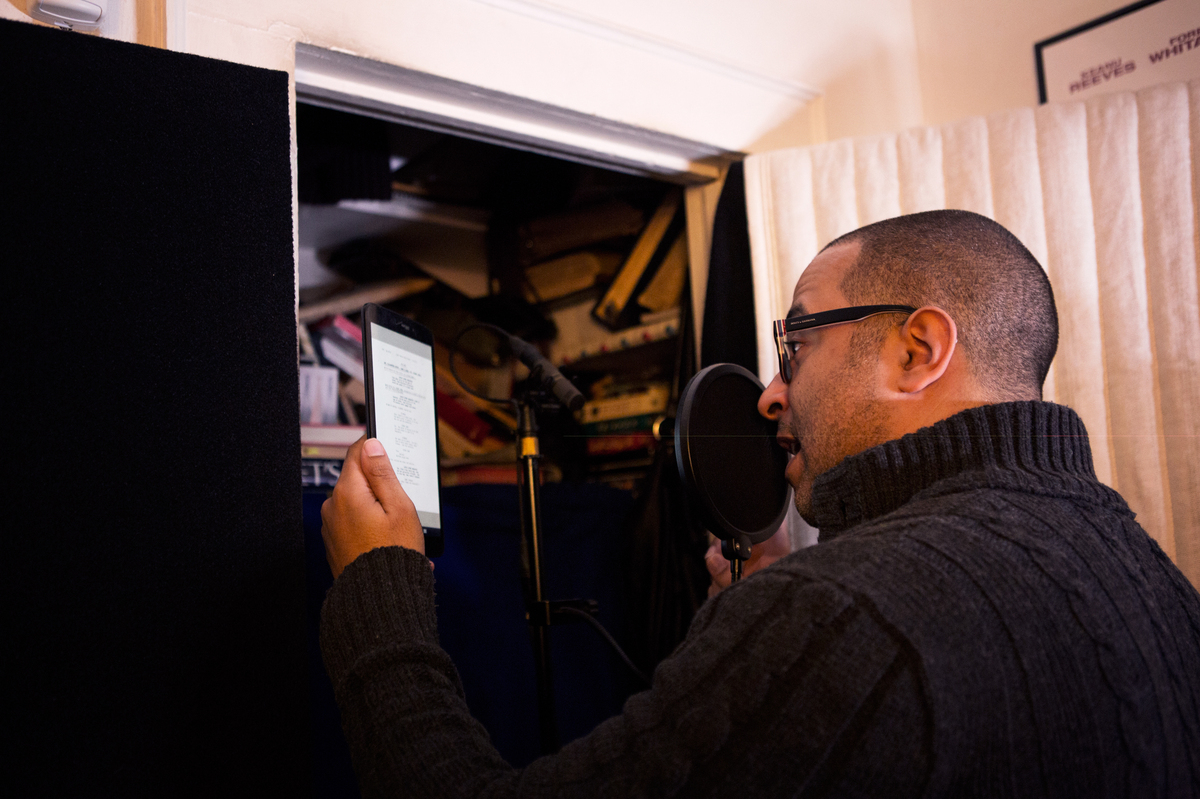 Mendez reads from a Jane the Virgin script in his bedroom recording studio. He records his voice-overs mostly from his home.

"It said telenovela announcer with a Hispanic accent. The role literally said 'Latin Lover Narrator.' And I was like, I don't wanna do this. This sounds like a joke. Stereotypical stuff. So I put it away," he says. At first glance, Mendez thought it was yet another role poking fun at Latinos.

Then, later that day — before he had to pick his kids up from school — he pulled up the email again, and decided to give the audition a shot. Not knowing much about the narrator — who he was, even — Mendez debated how the voice would sound.

"Initially I was going to do a standard telenovela announcer, which is what I call the Spanish Dracula, the 'Telemundo guy,' " Mendez says. "I said an hour show with that guy is going to get really super annoying."

He didn't want the narrator to sound stereotypical, but he wanted people to hear a real connection to the Spanish language.

When asked about how his own father feels about his career, Mendez is equivocal. He says his parents, who returned to the Dominican Republic, don't really watch Jane the Virgin, but they understand he's made a mark in a difficult industry. He might have left the family headstone business, but at least he's successful on his own terms.

These days, as Jane begins its between-season hiatus, Mendez is busy with his other voice-over gigs. And in a throwback to when he was a kid, he's working on a motion comic series — a mix between audio book and animation — called Mike Tomb. It's about a Dominican-American guy named Mike Gonzalez.

Gonzalez's goal? To break from the family tombstone industry and become a poet.