Accessibility links
My 'Oriental' Father: On The Words We Use To Describe Ourselves : Code Switch President Obama recently signed a bill striking the term "Oriental" from federal law. It was a reminder for NPR's Kat Chow of the fact that her father still uses the word — to describe himself. 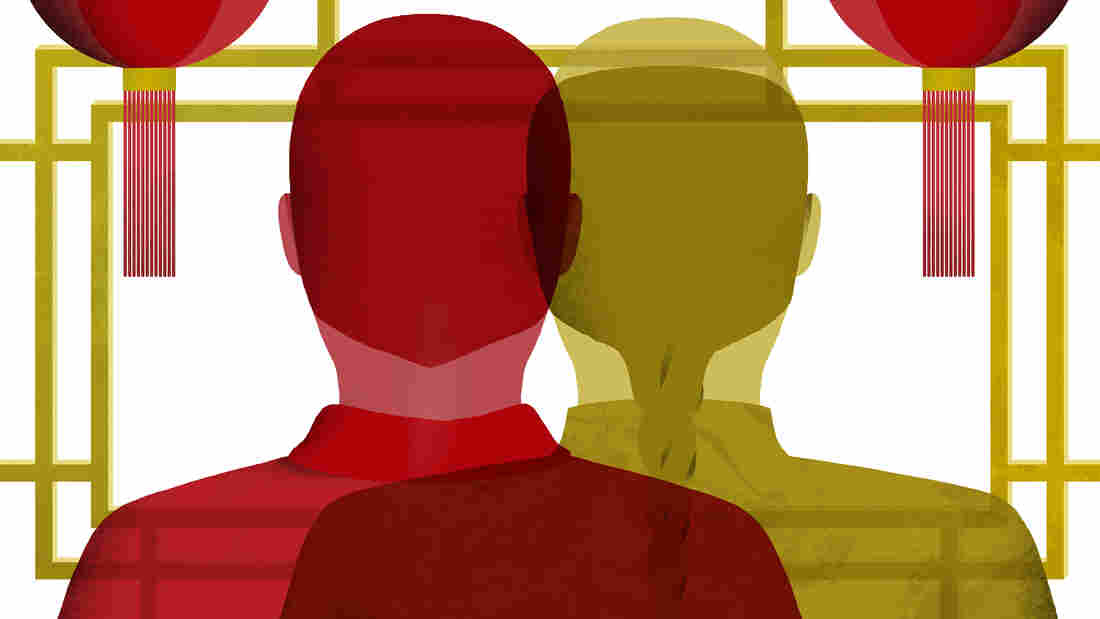 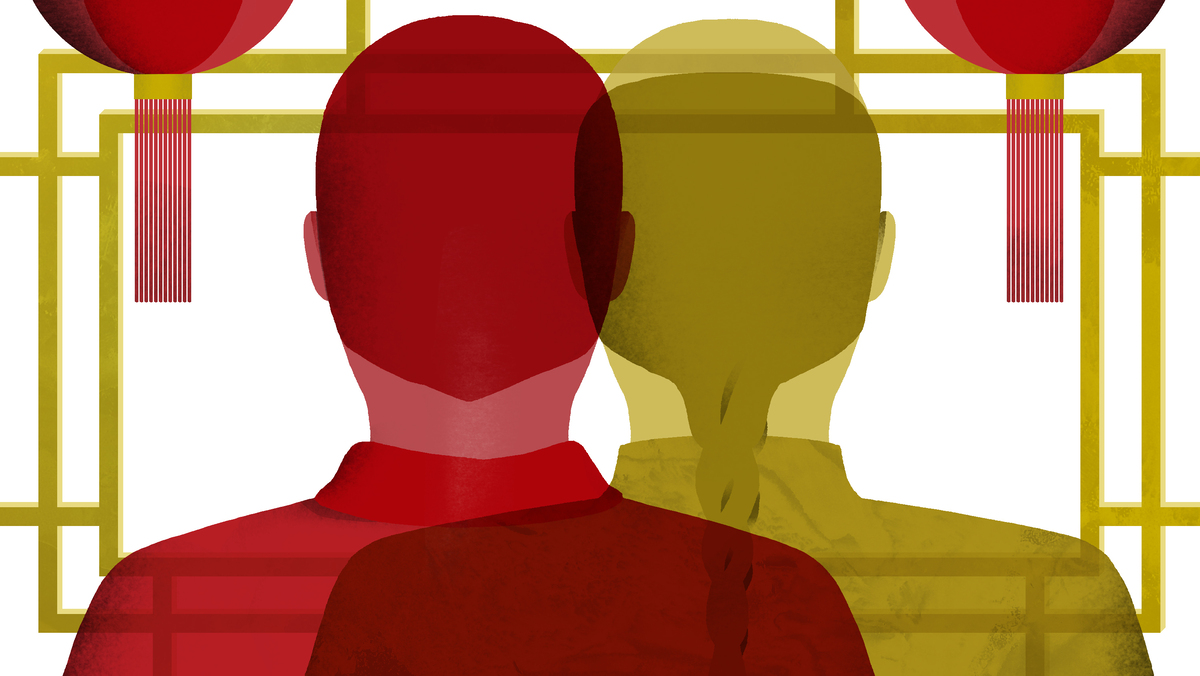 My dad, who came to the U.S. in 1969 from Hong Kong, who speaks English-lilted-with-Taishanese, who has lived in Connecticut for two-thirds of his life — three times the length of his time in Asia — still uses the word "Oriental."

It's always a casual reference. "This place used to be a Oriental restaurant," he'll say, as we drive by a boarded-up storefront that once was a Chinese take-out joint.

He doesn't use it in a derogatory way. It's just his go-to term for anything Asian, whether that's food, a business, a person, an idea. But I keep trying to get him to stop.

"We use Asian, or Asian-American, now," I'll tell him. "That term's been outdated for a long time." He just shrugs. I can't see his expression under his old baseball hat and clip-on sunglasses — the type that flip up — but I know he's raising an eyebrow, throwing a side-eye my way.

In the '80s, my dad owned one of those so-called Oriental restaurants himself, in a tiny suburb of Hartford, Conn. It shared a parking lot with the driving school where I would eventually take classes. His restaurant didn't stick around long enough for me to see it, but I find vestiges of it boxed up in our basement, as if the faded menus and wooden platters are waiting to be used again.

The restaurant's name, Lotus Garden, projected something lofty. It had an expansive, frenetic menu including dumplings and barbecue pork the chef cooked fresh every day, and a dessert my dad made himself, mixing coconut flakes into vanilla ice cream. He still likes to remind us of a customer who came in almost daily to eat a plate of that barbecued pork — the recipe was just that good.

Ever find yourself in a conversation about race and identity where you just get...stuck? Code Switch can help. We're all journalists of color, and this isn't just the work we do. It's the lives we lead. Sometimes, we'll make you laugh. Other times, you'll get uncomfortable. But we'll always be unflinchingly honest and empathetic. Come mix it up with us.

Check out our trailer. Subscribe to listen. Tune in May 31.

But beyond the pork, whenever I heard my dad talk about the ups and downs of Lotus Garden, I understood that he was never in love with food the way I figured a restaurant owner should be. As a kid, if I complained about his cooking, he'd tell me that flavors don't really matter because food winds up the same in your stomach anyway. But opening Lotus Garden was his version of the American Dream, part of a long history of Chinese immigrants opening restaurants in the U.S., similar to how his father had left Guangzhou to start a Chinese restaurant in Cuba.

Though he may have wanted it differently, Lotus Garden never pulled in the local Chinese crowd, nearly nonexistent in our town. Instead, it became a place where white folks would venture for a fix of egg drop soup. In old photos I've seen in family albums, it looked like every other Asian restaurant trying to cater to non-Asian tastes: booths upholstered in faux red leather, black metal chairs, heavy ceramic plates with red borders and paintings of fish in ponds. It was the type of place that my mother once told me charged too much for food that was only so-so. It would eventually go bankrupt, and for a long while seemed to splinter my dad's ambition.

In a way, my dad's "Oriental" restaurant was a mirror of the term itself. It became something people who didn't look like him experienced as foreign, even if that's not what he intended, or how he saw himself. The menu was more for non-Asian taste buds than ours. I wonder if he felt forced to sell a more palatable version of his Chinese culture, or if he ever thought he'd compromised his values. But with his business tanking, I doubt he had time to worry about anything besides trying to stay afloat.

The restaurant is long gone, but these days, when my dad refers to himself as "Oriental," I find myself thinking back on it. I have to remind myself that he doesn't see the word the way I do: cringe-inducing and pretty sinister at its base, meant to box one group away for another's comfort. To him, it's neutral, neither bad nor good. But when I hear the term, it brings up that cartoonish "Kung Fu Fighting" melody and caricatures of grinning Asian men with ponytails and buckteeth. I worry that's an echo of what my dad's neighbors in Connecticut see when they see him.

This thought doesn't come from nowhere. When I was 9 or 10, I was playing outside with a girl my age who lived two houses over. We were drawing on a driveway with chalk, and I must have been babbling, because as I remember it, she hissed, "Shuddup, you chink." It only occurred to me a couple of years ago that she must have learned that word somewhere before she spat it at me, and I wonder if she heard her parents use it while they talked about my family.

To some degree, these things come down to the words available to us in the first place.

Chink as a racial moniker was always meant to cut, but there was a time — my dad's — when "Oriental" was the status quo. To some degree, these things come down to the words available to us in the first place. Between the late '60s, when my dad emigrated here from British colonial Hong Kong, and 1990, when I was born, there was an eruption in the way Americans talked and thought about all sorts of identities. While my dad's English vocabulary was equipped with "Oriental," scholars and activists alike turned away from words like it and "Negro" in favor of self-appointed terms like "Asian," "Asian-American," "black" and "African-American." And recently, President Obama signed a bill striking the term "Oriental" — one of many other outdated terms — from federal laws.

I came of age in a generation that benefited from these wind shifts. My dad, like many people his age, didn't really pay them much mind. When it came to describing himself, the words he had when he came to this country were all he ended up needing. I get that he uses it as a matter of fact. He gets that I have my reasons for not using it. And when it comes to us talking to each other, that's fine.

When I was 16, I walked into the air-conditioned lobby of Green Tea/Green Olive Bistro — that's really what it was called — in yet another small Connecticut suburb, and asked for a job. It was a new-ish restaurant in an old Uno's Pizzeria, opened by a Cantonese couple who ran a more traditional dim sum place a few towns away. They wanted to venture into something more fusion, they told me. The Green Olive kitchen served traditional, thin-crust pizza, made by a white chef who they bragged came from a celebrated Italian restaurant in New Haven, and the Green Tea half cooked up chow mein, made by chefs from Southern China. A wall segregated the two.

I said I was up for whatever they had — hostess, waitress, whatever would pay. I needed gas money so that I could shuttle my mom's old minivan back and forth to school. They agreed to pay me cash under the table as a hostess.

I was tasked with seating guests, filling their glasses with water and bringing them trays of fried dough — the ones that come in little crunchy strips — and sweet and sour sauce in bowls that never felt clean. I would hand customers two different menus — one for the Chinese kitchen, another for the Italian one — and I'd watch them puzzle over this place, this awkward attempt at making everyone comfortable.

The manager would take orders in English, writing the number of the dish down in Chinese to send to the line cooks. Sometimes he would try to talk to me in Cantonese, then switch to English, disappointed by my barely intelligible stuttering. But at the end of each night, we all shared the same ritual: The staff from the Chinese kitchen would retreat to the back for the family meal, where we would inhale thin soups with boiled seaweed tied into knots and braised beef with winter melon — off-menu items none of the customers even knew existed. It was the most Chinese people I'd ever been around, not counting family, and these meals, for me, became a respite from the dinner services, where we were required to sell what I saw as a watered-down version of our cultures — and ourselves.

And that's why one particular memory from my time at that restaurant has stayed under my skin.

I was in my hostess spot by the front door, smiling blandly in dress pants that I'd hemmed myself by duct-taping the bottoms. As customers trickled in, I greeted them anxiously.

"Oh, your English is so good," a woman, white and middle-aged, said to me. "I'd hope so," I said stiffly, wondering if I was still smiling. "I was born here."

She hadn't said, "Your English is so good — for an Oriental," but in that moment, I felt she might as well have.

And that day, I felt Oriental — me standing there with faked welcome in that so-called Oriental restaurant. Suddenly, all that relief I'd had — of being around this new restaurant family, around people who looked like me — had evaporated. I did want to be seen as part of this group, but on my own terms. Not in the box this woman was trying to tuck me into.

We can wish and wish and wish for someone to change. We can think that by using this word, and not that... they can make things better or easier for themselves — and by extension, us. But all that wishing won't matter if the rest of the world refuses to bend.

Looking back, I've always tried to get my dad to stop using "Oriental" for a slew of reasons. Some have to do with high-minded righteousness, but mostly I've always worried that as long as he keeps using it, it'll be acceptable for others to feel that way about him — as someone, or something, inextricably foreign, unable to ever truly belong.

But even if my dad never utters that word again, and even if my generation of Asian-Americans rejected it from the start, we can't dislodge it from everyone else's minds. We can wish and wish and wish for someone to change. We can think that by using this word, and not that, or dressing differently, having different tastes, they can make things better or easier for themselves — and by extension, us. But all that wishing won't matter if the rest of the world refuses to bend.