Accessibility links
Filipino World War II Veterans Living In U.S. Can Now Reunite With Family : Code Switch For decades, some Filipino World War II veterans have been separated from their relatives in the Philippines. New U.S. immigration rules for these families could change that. 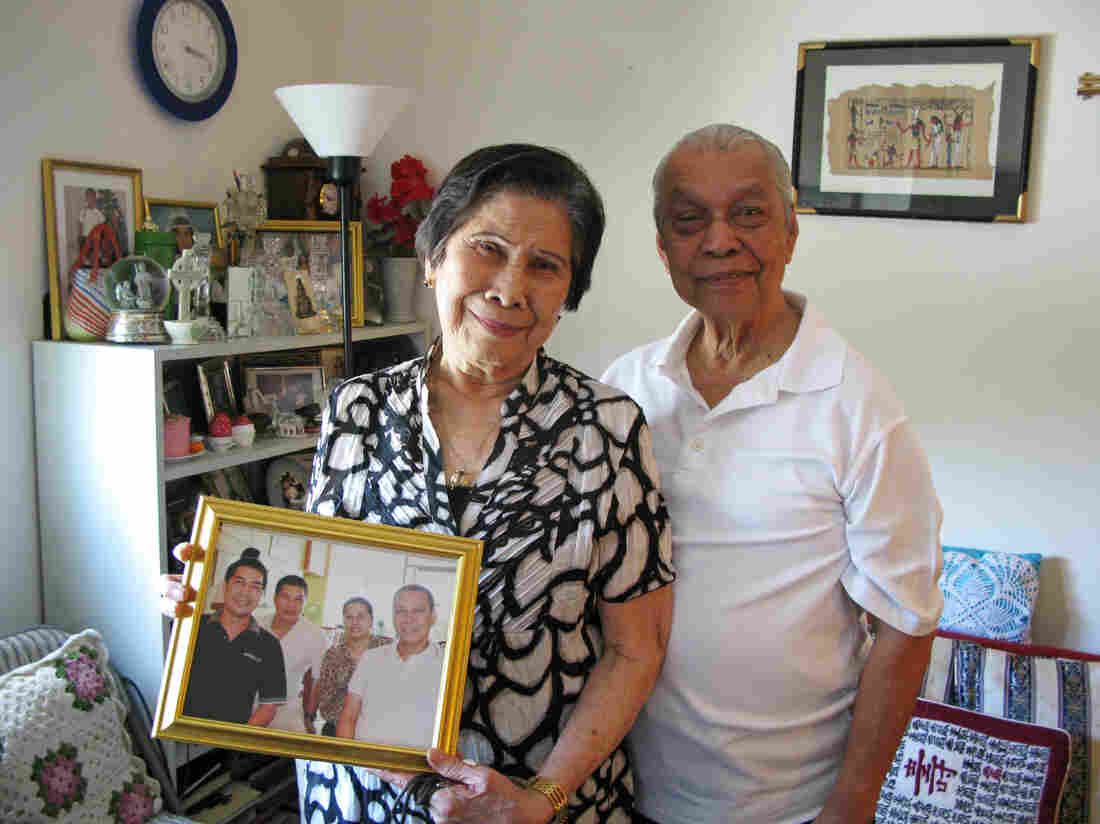 World War II veteran Rudolpho Panaglima lives in Arlington, Va., with his wife, Pura, who holds a portrait of their four children living abroad. Their eldest son, Rolando, has been waiting 20 years for a visa to move to the U.S. from the Philippines. Evie Stone/NPR hide caption 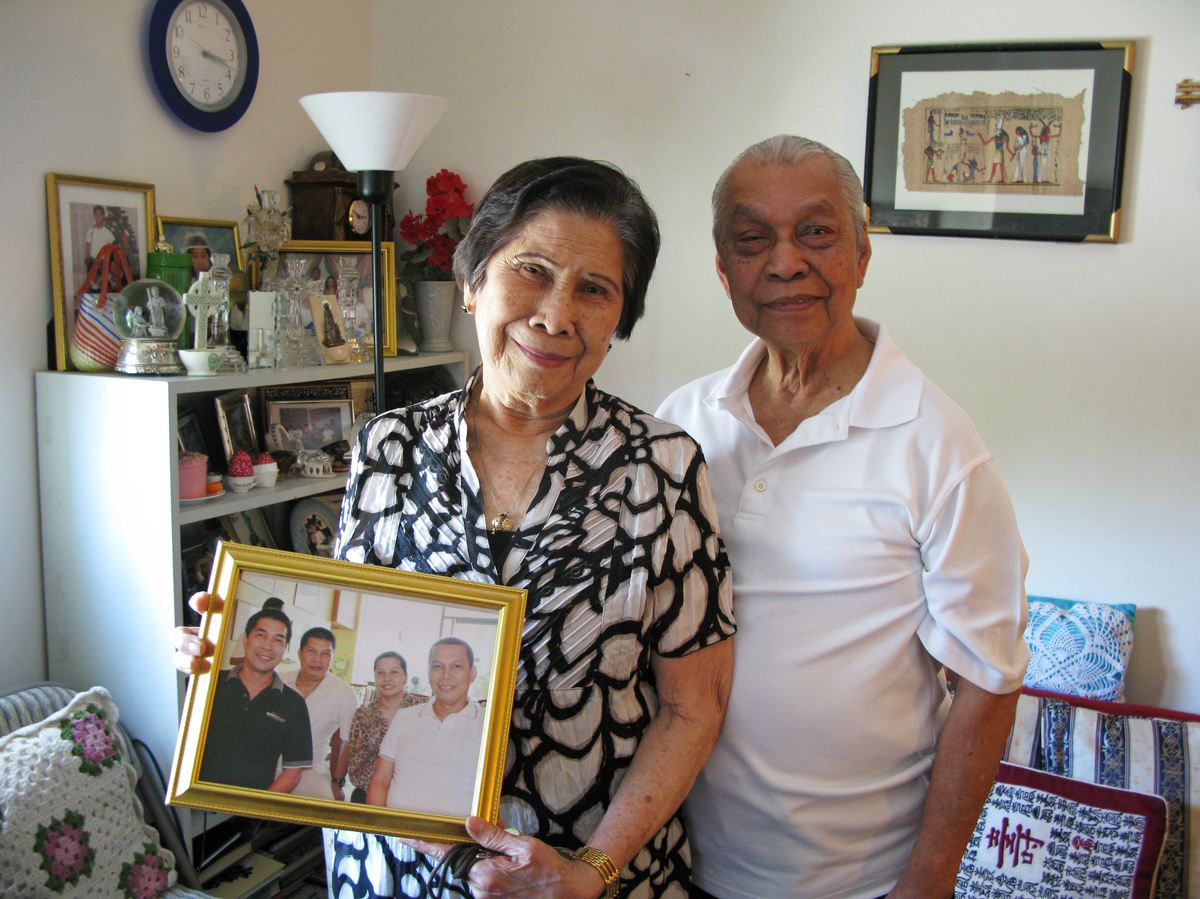 World War II veteran Rudolpho Panaglima lives in Arlington, Va., with his wife, Pura, who holds a portrait of their four children living abroad. Their eldest son, Rolando, has been waiting 20 years for a visa to move to the U.S. from the Philippines.

More than 260,000 Filipino fighters served under the American flag during World War II. Decades after they fought alongside U.S. troops in the Philippines, many were allowed to move to the U.S. and become citizens. But they had to leave their grown children behind. Now, those families could finally be reunited in the U.S.

Rudolpho Panaglima has been waiting for that moment for decades. He was 13 when he joined his father in a Filipino guerrilla unit that was coordinating with U.S. forces. Being so young, he says, allowed him to sneak past the Japanese military as a courier and scout.

"I went ahead to make sure that the enemy is not there," says Panaglima, who brought back military intelligence, food and medicine to his unit's base in the mountains.

In return for defending the Philippines against invading Japanese forces, the Filipino fighters were promised benefits, pensions and U.S. citizenship. But as the war ended in 1946, President Harry Truman signed laws that stripped away those promises for Panaglima and many other Filipino veterans.

They won some back after decades of protests, lobbying and lawsuits. As part of the 2009 stimulus package, some Filipino veterans received one-time payments of $15,000 for U.S. citizens and $9,000 for non-U.S. citizens.

It wasn't until the early 1990s when veterans like Panaglima could move to the U.S. with full citizenship, along with their spouses, parents and unmarried children under 21.

Now 86, Panaglima lives with his wife in a small apartment in Arlington, Va., just outside Washington, D.C. They have four grown children, none of whom moved with them to the U.S. Still, their eldest son, Rolando, wants to leave the Philippines and join them as their caregiver.

"That is what I am dreaming because of our age now," says Rudolpho, whose wife, Pura, is 83. 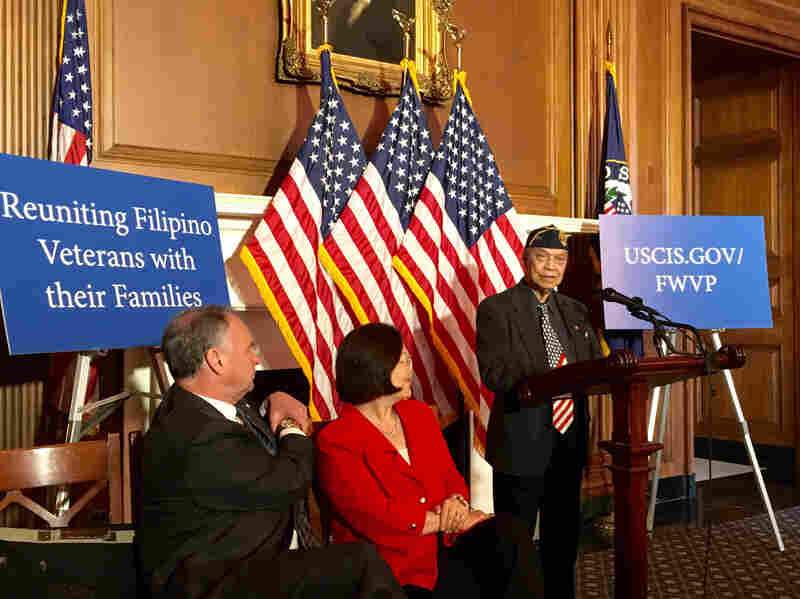 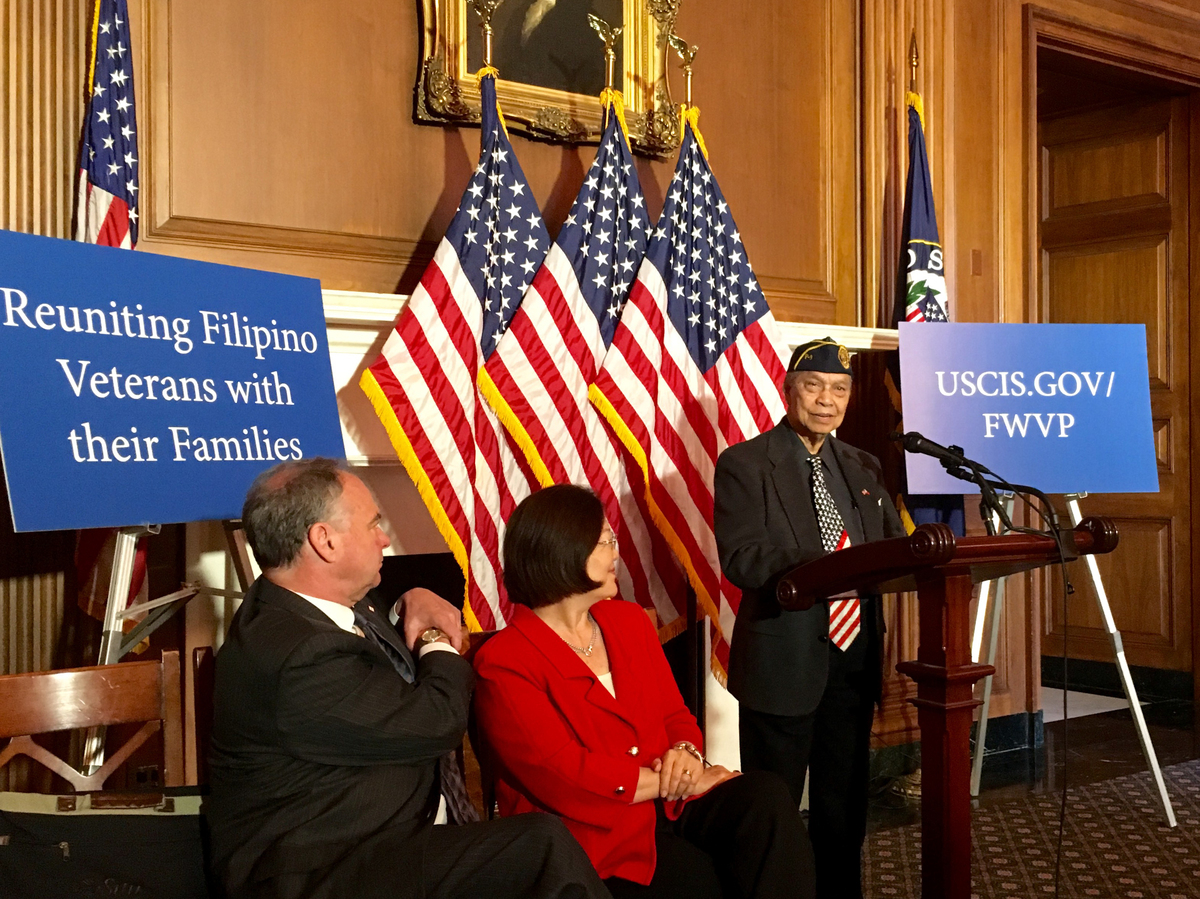 It's a dream that many Filipino veterans thought would come true earlier. Their adult children are eligible for green cards. But some have had to wait for two decades, including Rolando, whose youngest daughter recently graduated from college in the Philippines. Rolando says he took photos during the ceremony to send to his parents. "It's a lonely situation because they've never seen my children grow up," he says.

Quota restrictions and backlogs in processing are part of the reason relatives of Filipino veterans have been kept apart from their loved ones.

But starting Wednesday, vets who are recognized by the Department of Defense can apply to bring over their relatives sooner through the Filipino World War II Veterans Parole, or FWVP, program.

"This program is intended to honor their service and their sacrifice," says Daniel Cosgrove, a spokesman for U.S. Citizenship and Immigration Services, which is managing the program. First announced by the Obama administration last July, the program allows family members with already approved visa applications to stay in the U.S. on parole while they continue to wait to receive their immigration visas. They're allowed to work, but their parole ends after three years. Family members can then reapply. They would also have to reapply for visas if they haven't received them before the veteran sponsoring them dies.

While the program does not solve immigration issues for many families of Filipino veterans, it offers some last-minute relief. "It would allow the veteran to spend his or her remaining years with the loved one. And it would allow the loved one to provide care and support for the aging veteran," Cosgrove says.

Veterans with family members who haven't applied for immigration visas before can apply for the parole program, too, after their relatives get their new visa applications approved.

Widows of Filipino veterans are also eligible to apply to bring over family. That's a special condition that is not included in similar parole programs for U.S. citizens and green-card holders with family members waiting in Cuba or Haiti. Immigration officials are including Filipino veterans' surviving spouses in the program because many veterans have already died. If both the veteran and the surviving spouse have died, their children and siblings can apply for the program in some limited cases.

But veterans who have fought for years to get formal recognition from the Department of Defense will be left out. These former fighters have had difficulty proving their service during the war because of missing documentation, and some have been waiting to reunite with their family members, too.

For Filipino veterans advocates like Lourdes Tancinco, the program is a bittersweet victory. An immigration attorney who helped start the Veterans Equity Center in San Francisco, Tancinco has been talking about the parole program with vets and widows in their 80s and 90s. "Most of them were not coherent anymore. They just thought that they were still there to wait for their family members. I guess they waited too long," she says.

She adds that traveling to the Philippines to visit family is too expensive for many veterans. It can also be difficult for their relatives abroad to get tourist visas to come to the U.S. because of fears that they would overstay those visas.

"They have to show proof that they can afford the trip, that they're going back to the Philippines after the short trip," Tancinco says. "They're always suspects because they're beneficiaries of immigrant petitions."

Immigration officials say the program will last for at least five years, although the next president could end it at any time. The first group of family members is expected to arrive in the U.S. by the end of 2016.

The audio of this story, as in a previous Web version, incorrectly says that parole ends for family members in the Filipino World War II Veterans Parole Program when the veteran sponsoring them dies. In fact, parole lasts for three years, after which eligible family members can reapply.