Accessibility links
Affirmative Action Case: Reactions To The Supreme Court Decision : Code Switch The Supreme Court rejected a challenge to an affirmative action program at the University of Texas at Austin brought by a white woman who claimed she would have gotten in if she weren't white. 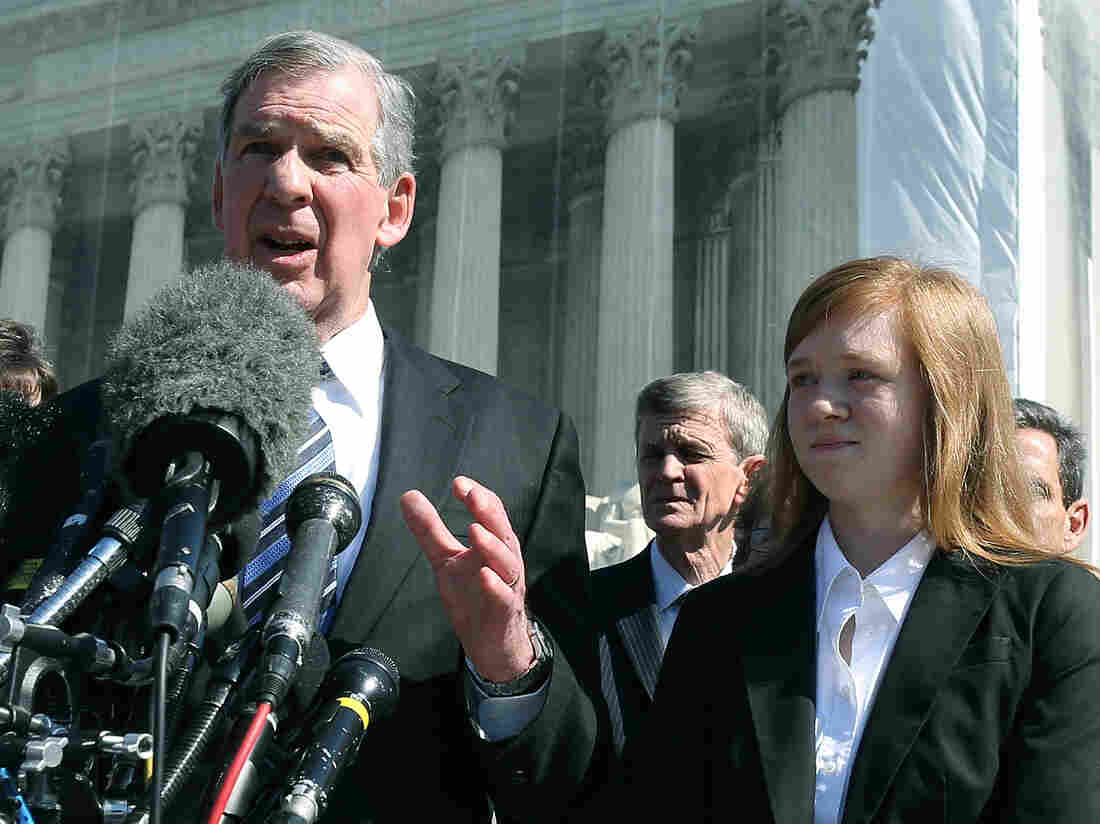 Attorney Bert Rein speaks to the media while standing with plaintiff Abigail Noel Fisher after the U.S. Supreme Court heard arguments in her case in 2012 in Washington, D.C. Mark Wilson/Getty Images hide caption 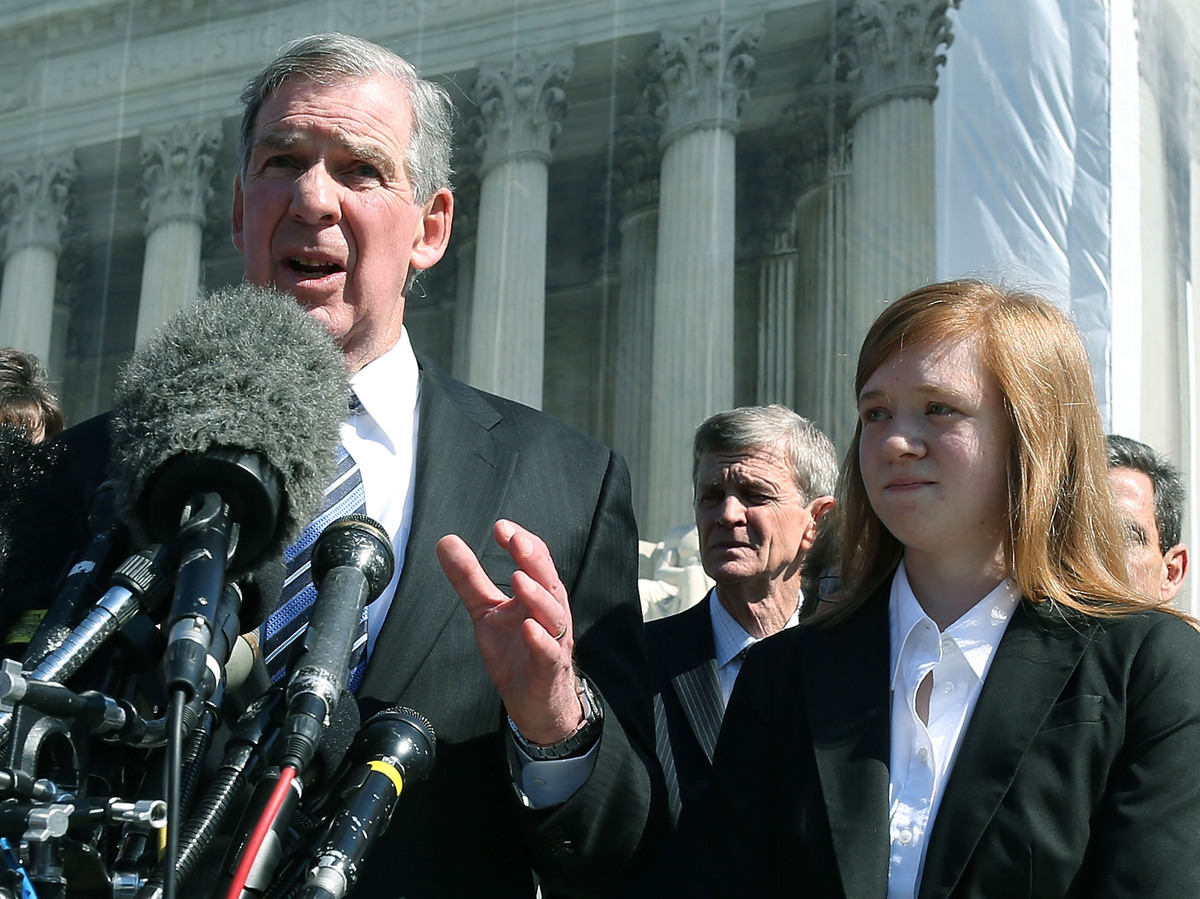 Attorney Bert Rein speaks to the media while standing with plaintiff Abigail Noel Fisher after the U.S. Supreme Court heard arguments in her case in 2012 in Washington, D.C.

In 2013, a young woman named Abigail Fisher sued the University of Texas after claiming she was denied admission to the school in 2008 because she was white.

"There were people in my class with lower grades who weren't in all the activities I was in, and who were being accepted into UT," said Fisher. "And the only other difference between us was the color of our skin."

Fisher sought to challenge the school's "race-conscious" admissions program, commonly referred to as affirmative action. Her case went all the way to the U.S. Supreme Court. On Thursday the court ruled that the school's program is lawful under the Equal Protection Clause.

"Considerable deference is owed to a university in defining those intangible characteristics, like student body diversity, that are central to its identity and educational mission," wrote Justice Anthony Kennedy for the majority opinion.

A Victory For Affirmative Action, And For Many Colleges A Sigh Of Relief

Fisher's case marks the most recent challenge to affirmative action, which was upheld in 1978 and 2003. Before Fisher's case, the court ruled that colleges and universities could consider race and ethnicity as a factor in admissions, as long as they didn't adopt quotas.

Some are calling the ruling a victory, but warn that this probably isn't the last case of its kind. Others satirized Fisher's complaint (the 2013 hashtag #staymadabby transformed — post-Lemonade — to #beckywiththebadgrades). Others drew attention to the age-old question of who affirmative action really benefits — and doesn't.

Here's a roundup of reactions to the Supreme Court ruling.

Over at Colorlines, Victor Goode wrote about how the ruling will affect students of color across the country. Goode called it a "victory for the civil rights community."

"In most respects, today's decision holds the line. It doesn't open any new ground to advance or diminish affirmative action. The Court was clear that affirmative action in higher education could continue, as long as its goals are clear and measurable. The Texas goals were "ending stereotypes, promoting cross-racial understanding, preparing students for an increasingly diverse workforce and society, and cultivating leaders with legitimacy in the eyes of the citizenry." These goals mirror the compelling interest standard that the Court has previously approved."

"In general, women today are more educated and make up more of the workforce than ever before, in part because of affirmative action policies. Indeed, from the tech industry to publishing, diversity has emerged as an overwhelming increase in the presence of white women, not necessarily people of color.

"Incidentally, over the years white women have become some of affirmative action's most ardent opponents.

"According to the 2014 Cooperative Congressional Election Study, nearly 70 percent of the 20,694 self-identified non-Hispanic white women surveyed either somewhat or strongly opposed affirmative action."

At The Root, Michael Harriot satirizes Fisher's charges of racial inequality. In a piece titled "The Many Complaints of Abigail Fisher," Harriot pokes fun at what he calls Fisher's "history of complaining" — and pokes holes in her claims:

"Although Fisher claimed she was denied entry to the University of Texas because she was white, obviously her spot had been taken by some student of color who was less qualified than she was. However, during the case, it was revealed that Fisher had lower grades than all but 47 students who were admitted to UT that year. Of the students who were admitted to Texas with grades lower than Fisher's — 42 of the 47 were white. Instead of Kanye-shrugging her shoulders and resigning herself to another school, she decided to sue. As a legacy student whose parents had attended the school, she felt she should have been afforded the opportunity of hopscotching past the more qualified candidates because ... well ... white privilege."

It's worth noting that some minorities believe affirmative action is actually hurting them. Last year, Zhang Tianpu wrote a piece for Foreign Policy titled "I'm Chinese, and I Know Why There Aren't More Asians in the Ivy League," in which Tianpu says the 'model minority' stereotype has worked against Asian students:

"Truth is, in terms of their economic status and academic accomplishments, Asians have already mostly drawn even with white people, even surpassed them. As a minority that takes seriously education and hard work, Asians have improved their lives immensely since coming to America just generations ago, and Asian students have quickly stood out. America, a society still led by white people, has started to call Asians a "model minority," who have already realized "quasi-whiteness" in their economic and intellectual lives. This is meant as praise, however it means that Asians must pay a price at the school gates.

"Asian students were once a class protected under affirmative action, along with African-Americans and other minorities. But because Asian students have performed better and better, with higher and higher grades, they've opened light-years' worth of distance between themselves and other racial minorities."

The University of Texas has used other mechanisms in an attempt to diversify. Most notably, its "Top 10 Percent" policy, which guarantees automatic admission to any Texas public university to high school students who are residents of the state and graduate at the top 10 percent of their class. Ironically, the policy — and the diversity mission behind it — benefits from racial segregation in Texas schools. This, from the Texas Tribune:

"Currently, the overwhelming majority of Texans admitted into UT-Austin get in because of the policy.

"The rule was designed to promote diversity at the state's top universities. Texas public schools are largely segregated, so promising admission to the same amount of students from minority-dominated schools and white schools — regardless of standardized test scores — in theory helps minorities."

Meanwhile, even as more black and Hispanic students are enrolling in college, they aren't necessarily making it into top-tier universities. According to The Atlantic, the black undergraduate population at these universities has stagnated at an average of 6 percent for the past 20 years. Faculty diversity isn't looking too great either, reminding us that this week's Supreme Court decision doesn't fix the problems affirmative action was designed to alleviate — it just returns us to status quo.

An earlier version of this story misspelled Abigail Fisher's last name as Fischer.