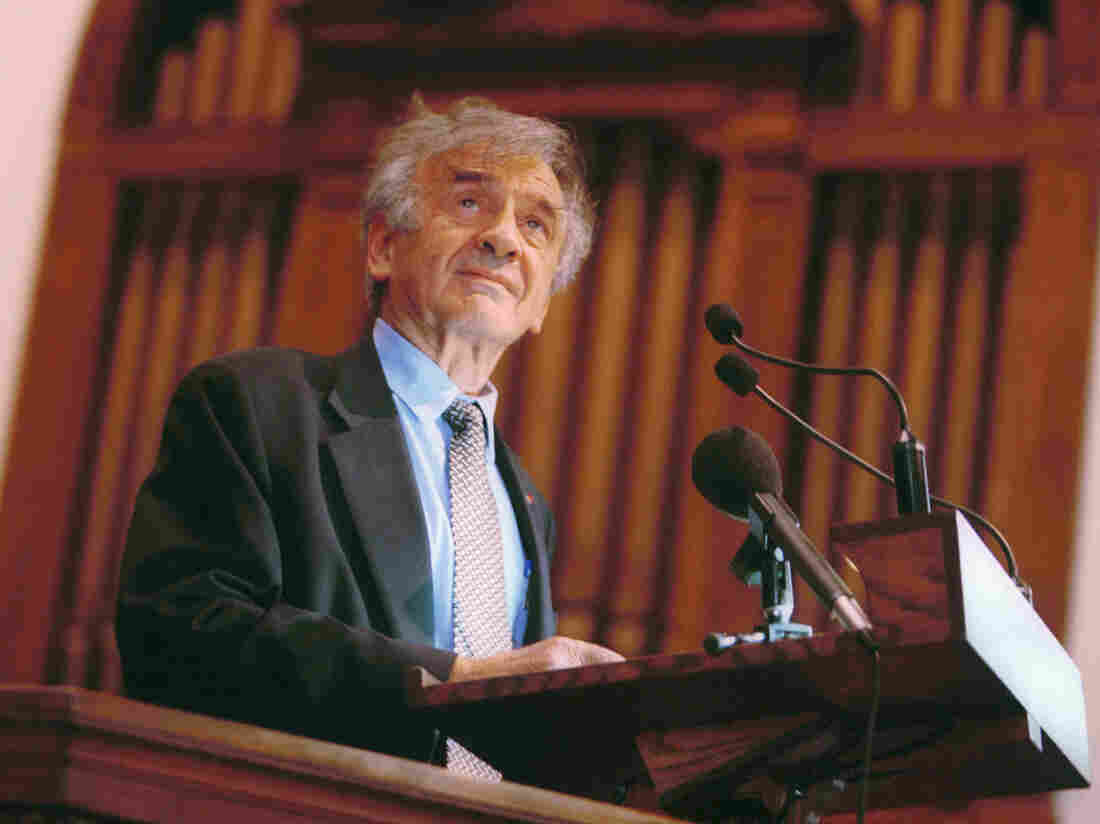 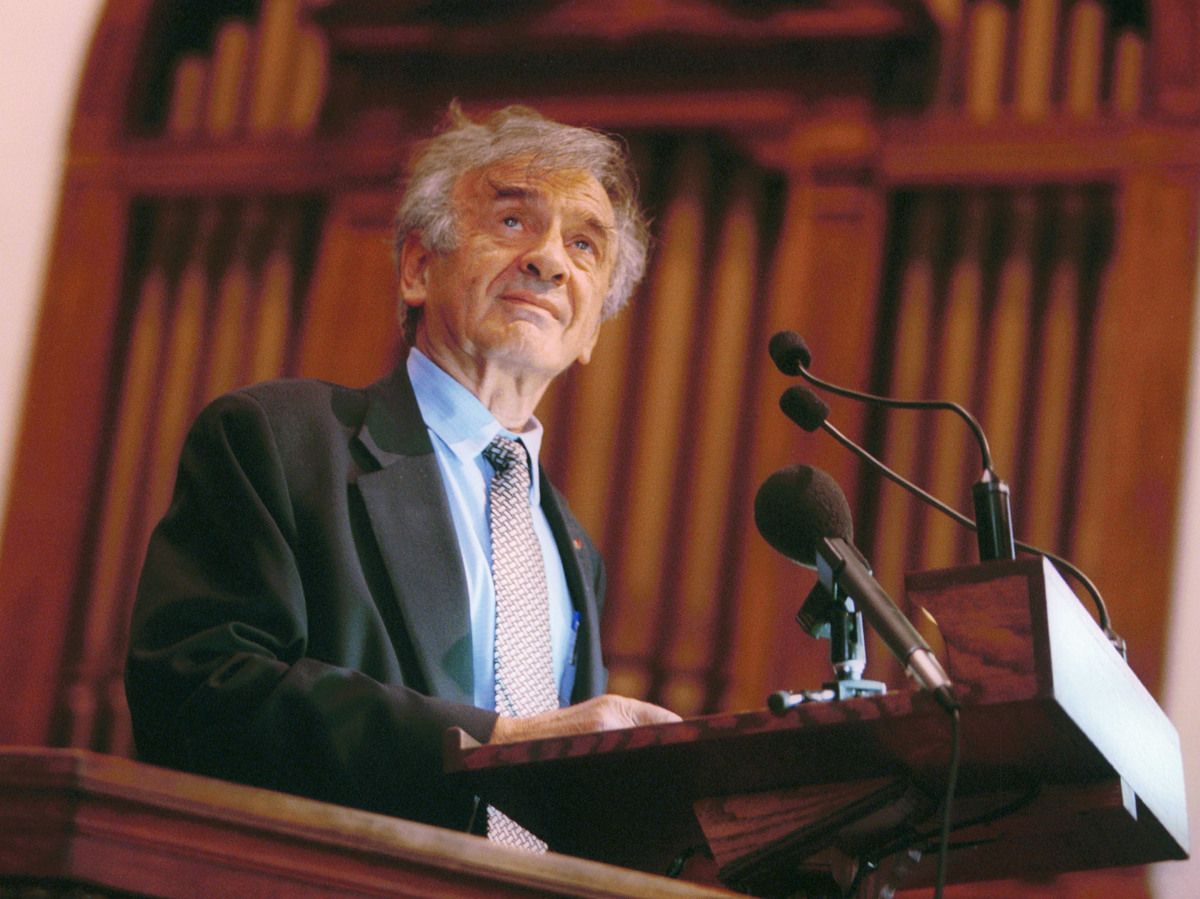 Elie Wiesel speaks at Vermont's Middlebury College in 2002. The Holocaust survivor, Nobel laureate and author died July 2 at the age of 87.

In the late '80s, when I was in the fifth and sixth grades, my school librarian took a special interest in me. One day our assignment was to do a book report, and Ms. Newton pointed me toward the biography section. Being the lazy kid I was, I picked out the thinnest book I could find. Barely a hundred pages, I thought. I can knock this out. I only had to skim it, I thought, and I'd get an A. The book was Night by Elie Wiesel.

I was right about one thing. It was a quick read. That was it.

I'd read stories with all kinds of protagonists — Laura Ingalls, Huck Finn, even The Diary of Anne Frank. Having read that last one — and having watched a few made-for-TV movies about the Holocaust — made me think I was already a bit of an expert on that experience.

But as I sat up reading, Night stirred something deeper in me. Maybe it was the simplicity of the story. Maybe it struck me because of how bookish and isolated and weird the young Eliezer was. Just like me, he was concerned with books and theology. Being Jewish made him vulnerable in a way that I understood. I knew, as a black child in Chicago, I lived in an isolated community where I was deeply loved. But with the racial turmoil of the time, I also knew there were hostile forces all around me.

The more I saw myself in Eliezer, the more Night frightened me. It was the language, the simplicity of his prose, the immediacy of the horror, the distance he seemed to feel from himself. To say the book changed my life would be a cliche and not entirely true. But if I could be so much like Elie, I reasoned then, the life I loved could be taken from me. The book made me aware not only that suffering existed elsewhere, but that my world was fragile as well. I imagined being removed from South Shore, from my church and school, from my family. The Holocaust felt very present. He made it personal. That stayed with me for years.

So when I was applying for college, and got a shiny brochure from Boston University, I remember turning the page and seeing Elie Wiesel's picture. That the author existed in the real world seemed magical. That, and a few well-placed pictures of the crew team, and I'd decided. Boston University not only had Boston going for it; it had Elie Wiesel.

I realized during orientation that one doesn't just take a class with Elie Wiesel; he picked you. And it was much easier to get in if you majored in religion, philosophy or something like that. So I switched majors. I entered BU to study communications, but changed to religion and history. I put my name on the list, and in my junior year I got the note that I'd been accepted to take his course on memory, subtitled "Writers on Writing." Each of the 16 or so students had to present a book. I picked The Bluest Eye by Toni Morrison.

If I had expected this to be some easy survey course with a lightweight, celebrity professor, the surprise would be mine. On the first day of class, Professor Wiesel breezed into class and quickly destroyed my ideas of what he'd be. He doffed his jacket and rolled up his sleeves and immediately started with the jokes. He was trim, and stylish with his perfectly knotted tie and lapel pin, which I assumed was for the French Legion of Honor. Professor Wiesel was goofy, cute and super funny, kind of like Jackie Mason on Valium. Frequently while speaking he shoved his wild tuft of hair to the side. His vanity and arrogance were on full display; so were his sensitivity, generosity and humor.

"The relationship between teacher and student is sacred." Those are the only words I remember. He informed us that his office hours were mandatory. And we were expected to schedule our time with him. This would be a rigorous class. We would be graded on the quality of our participation, our presentation and the final.

As the weeks went by, the time to present my book came up. "Why did you choose the black book?" I thought to myself. I was already the only black guy in the class. Why draw attention to it? I'd had enough of being the only black whatever at my predominately white Jesuit high school to be extremely wary. As I read Morrison's debut novel, I was struck by how beautifully she captured the feelings of being not just black but dark. Unlike Night, this book took no imagination on my part. I knew it. I felt it. I'd lived it. Pecola Breedlove, the black protagonist who dreamed of getting blue eyes, was a girl I knew. Sometimes she was me.

When I began my presentation, and looked down at my notes about skin color, race, blackness, I was overcome. I glanced at Wiesel, who looked at me with encouragement. I immediately began to cry — not a Denzel Washington dignified Glory tear, but a full on Oprah "ugly cry."

Memory, he said, wasn't just for Holocaust survivors. The people who ask us to forget are not our friends. Memory not only honors those we lost but also gives us strength.

What strikes me about that course is not that I cried. It's the environment he created in the class. It was a collective sense of empathy. You see, though Wiesel was a celebrity professor, he didn't act like a celebrity professor. If you could get over the Nobel Prize thing, he was easy enough to chat up, especially when he was waiting for his car to the airport.

During our first office hours, Professor Wiesel turned back to that moment in class. We spoke about race. This was pre-Million Man March and O.J. trial, but post-Los Angeles riots. In my college youth, I was quick to want to "get beyond" race. I apologized for what I thought was an unmanly outburst in class. I admonished myself for "not being able to get past it."

I remember him leaning in and asking why I would want to forget.

Memory, he said, wasn't just for Holocaust survivors. The people who ask us to forget are not our friends. Memory not only honors those we lost but also gives us strength. In those office hours, he gave me a shield, practical words and thoughts that would help me — a gay, Nigerian, Catholic journalist. He gave me tools that would aid me in an often hostile world. Over the years, I have found myself quoting Professor Wiesel to white people who want me to "get over race." "That's old." "It was a hundred years ago." But Professor Wiesel had been emphatic: Nothing good comes of forgetting; remember, so that my past doesn't become your future.

From his Nobel Prize lecture:

Of course, we could try to forget the past. Why not? Is it not natural for a human being to repress what causes him pain, what causes him shame? Like the body, memory protects its wounds. When day breaks after a sleepless night, one's ghosts must withdraw; the dead are ordered back to their graves. But for the first time in history, we could not bury our dead. We bear their graves within ourselves.

For us, forgetting was never an option. Remembering is a noble and necessary act. The call of memory, the call to memory, reaches us from the very dawn of history. No commandment figures so frequently, so insistently, in the Bible. It is incumbent upon us to remember the good we have received, and the evil we have suffered.

So, as a journalist, at times without noticing, I find myself helping others to remember or bear witness. I will not forget the victims of police torture I reported on in Chicago, or Lafonso Rollins, who was falsely imprisoned for rape. He served 11 years until being exonerated in 2004 by DNA testing. I will not forget his eyes when that judgment was announced, and how, in that moment, he looked to me for assurance. I remember the kids I covered who were being held in the Cook County Juvenile Temporary Detention Center, where staff members sometimes paid them to fight. And when Trayvon Martin's parents went to Capitol Hill and the press corps was less than sensitive, I remember kneeling in front of his grieving parents with my microphone. Why in those moments would I want to forget?

In my personal life, though, remembering — and making others remember — the unfairness of racism is a harder choice. I am NPR's car reporter. For a normal gay man, being a car reporter and living near Beverly Hills should be a dream come true. I am a black man. That means that driving exotic cars or testing cars can be dangerous. I have been stopped at least five times this year (on July 5 most recently).

During the 2012 presidential campaign, I was stopped in Michigan, Indiana, Iowa and Ohio. I have tried to shield my friends and co-workers from the fear, anger and indignities I face on a daily basis. That futile exercise has cost me dearly. I realize that I have a responsibility to let people know about what affects me. But I also know that, as a black man, that has costs as well. Mentioning race to white Americans has almost never failed to cause me pain or to be attacked. (Recently, I said Britain might have a problem with race, and a white friend called me an a**hole for suggesting it.) As I grow older, and feel the need to speak up more, I understand just a little the burden Elie Wiesel took on.

I last spoke with him during the aftermath of the Bernie Madoff scandal. As a producer for NPR's All Things Considered, I was determined to book him. I was working in Boston; I spoke to him briefly around the time of one of his lectures. As I rushed to remind him that I had been his student, about the courses I took ("Writers on Writing," "The Philosophy and Literature of Friendship" among them), his tone lightened and his frail body stood a little taller. He smiled that broad, open smile of his with pride that one of his students had become a persistent journalist.

But, no, he was not going to speak to Robert Siegel about Madoff. He'd said all he had to say about Bernie Madoff. Plus, he'd been through much worse and so had others. His exasperation, sadness and bemusement with the whole thing was evident. In his jokes it was implied, "I survived the Holocaust, broke nearly every bone in my body. And now there's this." Even that was said with a weary laugh.

And that's what I mourn when I think about him now. I mourn the man who taught me that in many ways laughter is the greatest victory. I mourn the man who saw me struggling and tried to give me tools to survive. I mourn the man who let me know that those who demand that I forget are not my friends. I mourn the teacher who made a solemn vow to me as a student in the '90s and kept it. I mourn the fact that with him gone, I'm now more responsible for bearing witness. It saddens me that there's still so much to bear witness to.