Accessibility links
46 Stops: A Code Switch Podcast On 'The Driving Life And Death Of Philando Castile' : Code Switch Gene Demby talks with NPR's Cheryl Corley and Eyder Peralta, who reported on Philando Castile's encounters with local police — 46 of them — before he was killed during a traffic stop. 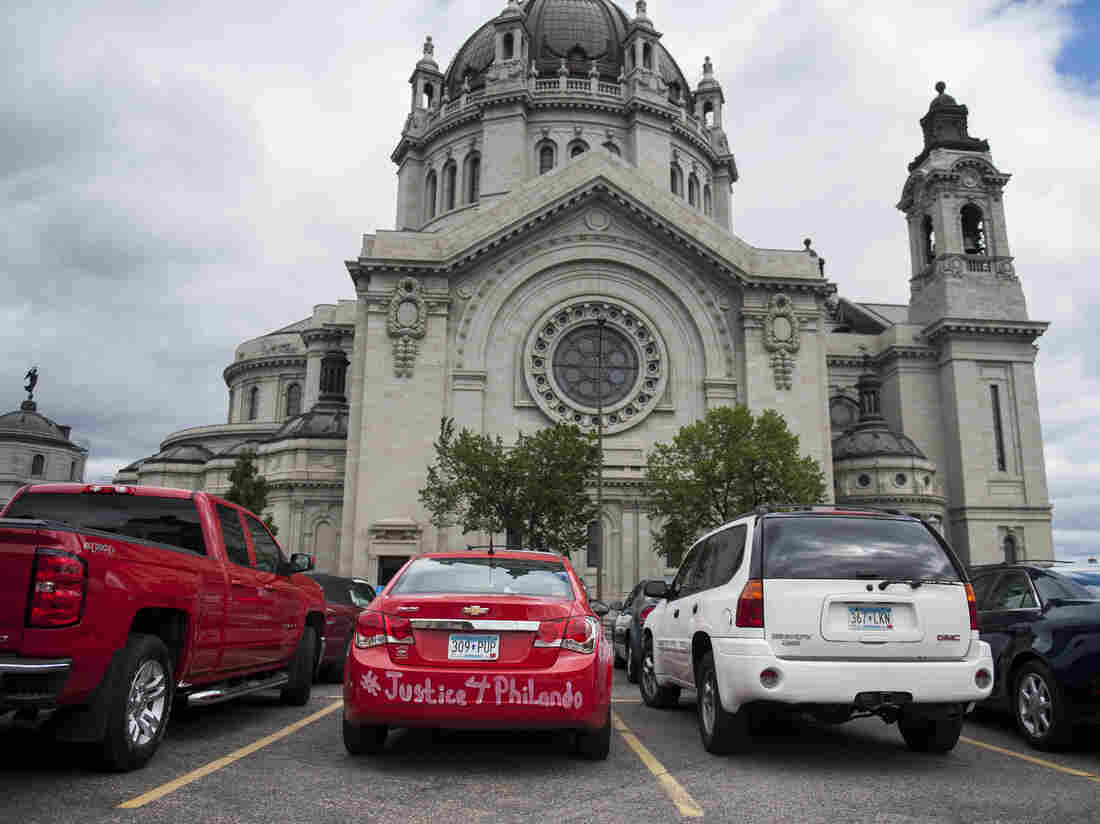 A car with "#Justice4Philando" written on it is parked outside the funeral of Philando Castile at the Cathedral of St. Paul. Stephen Maturen/Getty Images hide caption 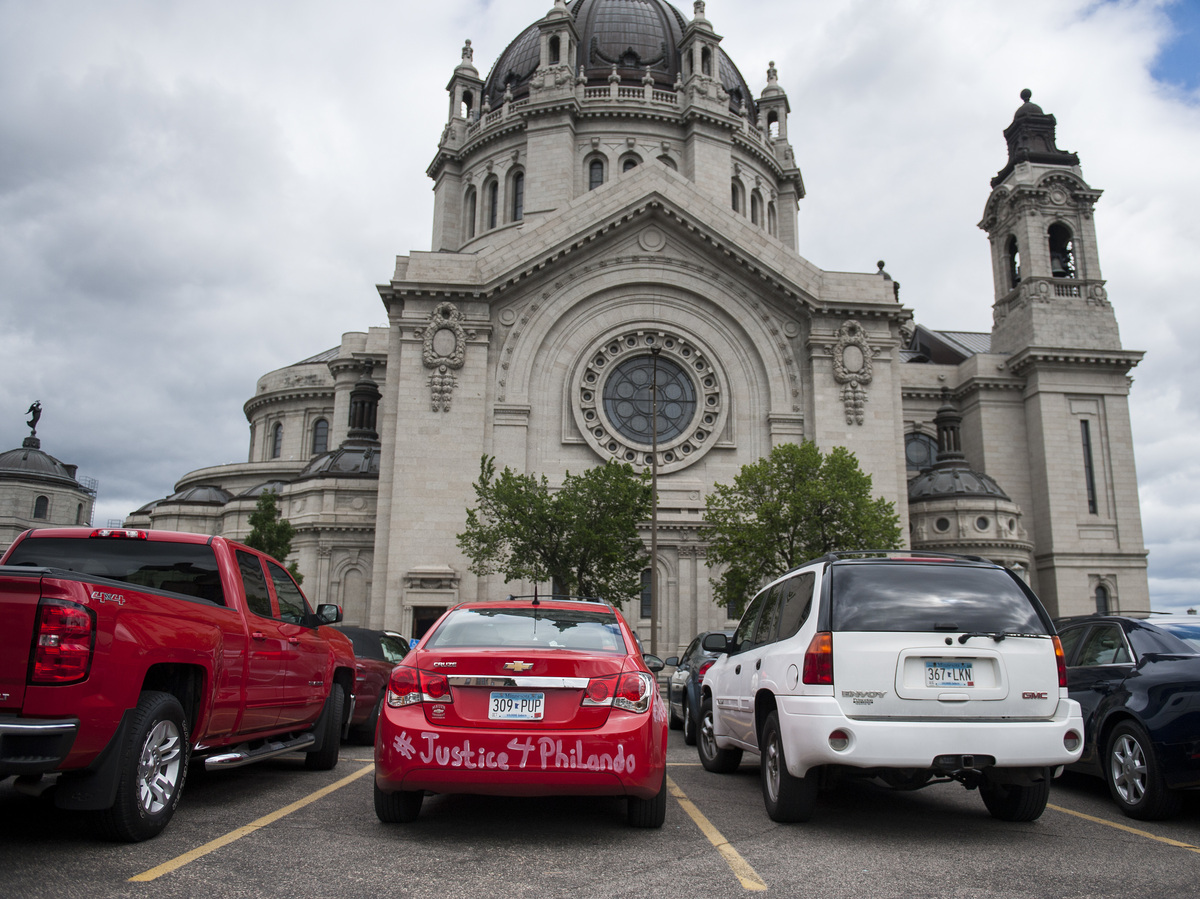 A car with "#Justice4Philando" written on it is parked outside the funeral of Philando Castile at the Cathedral of St. Paul.

In the two weeks since Philando Castile was shot and killed by a police officer in Minnesota after being pulled over for a broken taillight, we've learned that for Castile, routine traffic stops were far more routine than many people might imagine.

For our latest podcast episode, which you can hear above, Code Switch's Gene Demby spoke to NPR reporters Cheryl Corley and Eyder Peralta, who took a closer look at the circumstances surrounding Castile's death. They found that in his 14 years of driving, Castile was pulled over at least 46 times by police.

"Basically, Philando Castile was stopped from the very moment he got his license, through the moment of his death. That was his last stop," says Peralta. "He just seems to go through these cycles where there's just fine after fine after fine, stop after stop after stop ... And only six of them are from something you would actually notice from something outside the vehicle."

Experts told us that many black men in Minnesota get caught in a pattern of repeated traffic stops, fines and license suspensions — which leads to more stops, fines, suspensions and sometimes arrest. Peralta says that even in a two-year period when Castile wasn't getting pulled over, he was paying outstanding traffic fines, which sometimes added up to $500 a month.

Landscape of an arrest

Corley went to Minnesota to try to better understand the landscape in which this all was happening. "You have St. Paul, the city proper, twin city along with Minneapolis, and then you have a ring of suburbs around it," she says. She explained that Larpenteur Avenue is the dividing line between St. Paul and many of its surrounding suburbs. Castile was driving on Larpenteur and Fry, in the suburb of Falcon Heights, when he was pulled over for the last time.

That geography is important because, according to Myron Orfield, a professor of civil rights and civil liberties law at the University of Minnesota, policing in the suburbs looks very different from policing in the cities. Orfield has been studying bias in policing since 2003. He talked to Peralta about his findings.

Corley spoke to an attorney in Minneapolis who often works with people fighting traffic violations. That lawyer and his colleagues work with thousands of clients a year, but even he was surprised at the number of times Castile was pulled over. Still, Corley says, other folks she spoke to in Minneapolis accept that being pulled over regularly as a black man is just a fact of life. "The phrase that many people use is 'Driving while black,'" Corley says.

They also talked to Eric Sandvick, a public defender who actually represented Castile for one of his traffic stops. Sandvick says that what Castile went through was part of a larger system. "I don't remember enough about him specifically to speak of his character or anything like that. But I think what Mr. Castile symbolizes for a lot of us working in public defense is that driving offenses are typically just crimes of poverty. And Mr. Castile's story is one that repeats itself countless times throughout the court system," said Sandvick.

Sandvick explained that traffic stops can result in low-level misdemeanor offenses, and those charges can come with a suspension of one's driver's license. For poor people, getting that license back can mean spending time and money they don't have. In the meantime, they still have to go to work, pick up kids, get the groceries. So, Sandvick says, they often just keep driving.

Then, if they get pulled over again, they might end up facing a much more serious offense, in possible jail time.

Castile's girlfriend, Diamond Reynolds, said Castile was driving home from the grocery store with her and her 4-year-old daughter when they got stopped. Not long after, Castile was dead.

Some police officers in Minnesota have concerns about the way the system works. Paul Schnell, a police chief in Maplewood, a neighboring Minnesota suburb, spoke to Corley about the "brutal cycle" he says many motorists go through. He didn't know exactly what changes should be made, but told Corley that it was time for the legal establishment to recognize that there's a problem with the sheer number of stops that are happening.

"[The St. Anthony Police] have acknowledged that these numbers look bad. And what they're talking about is that half of the people that their department arrests are black, but blacks only make up 7 percent of the patrol area. They acknowledge that this is a problem, but it's complex, and they don't quite get into how they're trying to fix it," Peralta says.

You can check out this episode over at NPR's podcast directory, and on iTunes and other places podcasts are found.