Accessibility links
Roundup: The Republican National Convention And Race (So Far) : Code Switch A lawmaker asks if nonwhites have contributed to civilization. Accusations that a white woman stole remarks from a black woman. An exceedingly tiny number of black delegates. And more from the RNC.

Roundup: The Republican National Convention And Race (So Far)

Roundup: The Republican National Convention And Race (So Far) 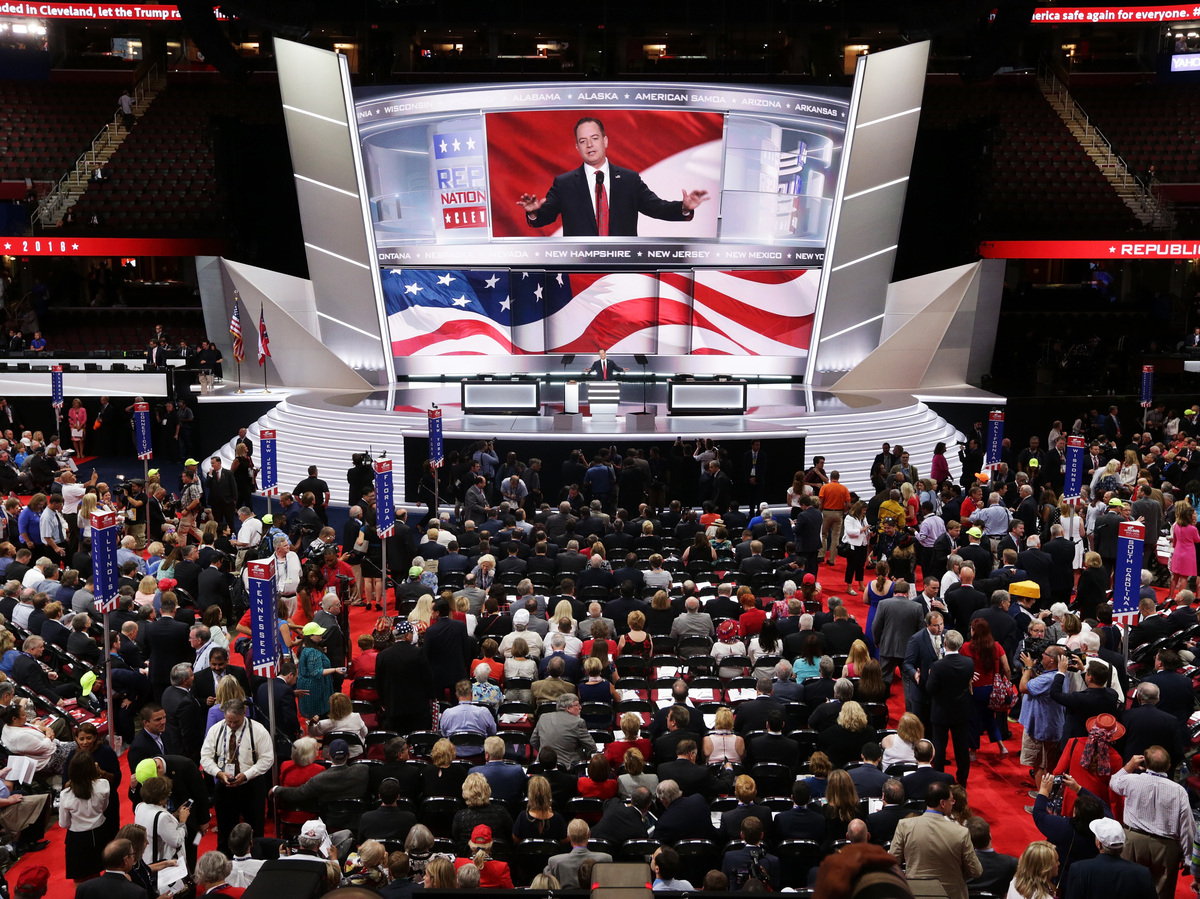 In a year when the topic seems virtually unavoidable, race has been a major focus of coverage of the Republican National Convention in Cleveland.

Meet One Of The Few Hispanic Faces Onstage At The RNC

There was the MSNBC panel Monday evening in which Iowa Rep. Steve King questioned whether nonwhites have made any contributions to civilization.

There was the speech in which Milwaukee County Sheriff David Clarke Jr., who is black, shouted "Blue lives matter!" and equated the Black Lives Matter movement with anarchy.

There was the viral hashtag #FamousMelaniaTrumpQuotes, inspired by accusations of plagiarism directed at the Republican presidential nominee's wife, whose speech included notable similarities to remarks Michelle Obama gave in 2008. Satirists using the hashtag had Melania Trump saying things like, "I have a dream!" and "Say it loud! I'm black and I'm proud!" drawing attention to the fact that a white woman was being accused of stealing from a black woman.

(On Wednesday, Trump Organization employee Meredith McIver took responsibility for the remarks, saying Melania Trump "always liked" Michelle Obama and, while preparing her speech, had read passages from the 2008 speech to McIver, who says she wrote them down and later included them in Mrs. Trump's speech.)

All this as the Republican Party faces scrutiny over diversity — or lack of it — in its ranks. The party sent fewer black delegates to this convention than at any point in the past century, according to The Washington Post: 18 black folks out of 2,472 total delegates. Here's more from the Post:

"This year's gathering will almost certainly rank among the bottom tier. The 2008 convention had the second-lowest density of black delegates, excluding 2016, trumped only by the 1964 convening that nominated Barry Goldwater. That was the year after the passage of the Civil Rights Act, one of the precipitating events that moves black Americans firmly into the Democratic camp.

"A poll from Quinnipiac University earlier this month showed Trump earning 1 percent of the black vote nationally. NBC News/Wall Street Journal polling in Ohio and Pennsylvania had worse news: In those states, Trump's share of the black vote was at zero."

The New York Times reported on a sense of fatigue expressed by some black Republicans at the convention. Day One, the article notes, was seen by some as a "white national convention lecturing African-Americans about the police and race relations."

"There was Rudolph W. Giuliani, the former mayor of New York, nearly shouting Monday night that the police only wanted to help people, regardless of race. A sea of white convention delegates, cheering wildly as two black speakers ridiculed the Black Lives Matter movement and unconditionally praised law enforcement officers. And a series of speakers pushing Donald J. Trump's law-and-order message and arguing, as he has, that the United States had lost its way.

" 'When a lot of white Republicans get together and bring up race, even telling black people how they should see police and the world, it evokes the worst kind of emotion,' said Mr. Hill, who supports Mr. Trump but decided to skip the convention. 'We have so few black Republicans to begin with. Talking about race won't bring us more.' "

This fatigue was mirrored in a "letter of concern" that minority Republicans wrote in response to the overwhelming whiteness of the convention. The letter, addressed to RNC Chairperson Reince Priebus, calls attention to "deficits" in the party's outreach to more diverse communities, and problems those deficits could create for the party. Here's part of the letter:

"This deficit allows the perception of a willful or often intentional low-prioritization of multicultural inclusion within the Republican Party structure.

"We have watched in dismay as the presumptive nominee of our Party, the Party of Abraham Lincoln, has caused massive defection, disgust, and disinterest with comments and behaviors that are offensive to the very demographics we need to win this election.

"The unfortunate reality of the points expressed above is more readily and recently evidenced by the unexplained exodus of Black and Hispanic staffers at the RNC headquarters."

At Fusion, Collier Meyerson wrote about Melania Trump's speech, saying this "apparent plagiarism" shouldn't be written off as a "silly mistake," and that it's important to consider the context in which Michelle Obama's similar words and phrases were originally delivered:

"The words were not only an insight into the Obama couple's shared values, but a way to make their skin color more palatable to skeptical white voters. Michelle drew on themes that are, unfortunately, not often associated with black America by white America: that being honest is paramount, that working hard is a must, and that she and her husband take serious stock in the American dream — a dream that has largely excluded black Americans. They were important words for a black woman, specifically, to say on national television."

It's worth noting that people of color have taken a stage at the RNC. There was also Sajid Tarar, a Pakistani Muslim immigrant who led a prayer for Donald Trump at the close of the second day. In an interview with Fusion, Tarar explains his rationale behind supporting Trump:

"In American politics, we like to use identity as shorthand: It's easy to conceptualize the 'Muslim vote' as a monolithic bloc. But as Tarar makes clear, voters are far more complicated than any single identity. He's Muslim, but he's also conservative and pissed off at the establishment and worried about terrorism.

" 'This is my country and this is my kids' country. That is my number one priority, the safety of America,' Tarar said. 'Donald Trump agrees with that.' "

On Day Two of the convention, Harmeet Dhillon, a Sikh American woman who formerly chaired the Republican Party of San Francisco, opened the convention day with a Sikh prayer. Her head was covered with a scarf, and she sang the invocation in Punjabi before translating it into English as white audience members bowed their heads.

Milwaukee County Sheriff David Clarke Jr., a black Democrat, also addressed the mostly white crowd at the convention, saying in his speech that race is a "heated issue" in the United States. He talked about the shooting deaths of three police officers in Baton Rouge and the acquittal of an officer charged in the death of Freddie Gray in Baltimore, which he called "good news."

"What we witnessed in Ferguson, in Baltimore and Baton Rouge was a collapse of the social order," said Clarke in his speech. "So many of the actions of the Occupy Movement and Black Lives Matter transcends peaceful protest and violates the code of conduct we rely on. I call it anarchy."

The Washington Post's Janell Ross wrote about why someone like Clarke — again, technically a Democrat — might get invited to speak at the RNC. He was appointed to his current position by the then-governor of Wisconsin, a Republican. Part of what made Clarke a "kind of Milwaukee attraction," Ross writes, was a sense that he was "one of those elected officials able to draw large crowds, appeal to people across party lines and say things that no white politician, certainly no white Republican would without some kind of blowback in the very politically blue, nearly 1/3 black Milwaukee area."

Ross talked with political scientist Juliet Hooker about this, and here's some of what Hooker had to say:

"The appeal of a black conservative like Clarke is that their views disrupt what I call racialized solidarity ... (i.e. that blacks and whites tend to have different views of the same events, as has been largely true of Black Lives Matter even with all the videos showing police escalation, culpability, etc.).

"This allows the critique of BLM [Black Lives Matter] to become an issue that Republicans can say is about ideology, not racism. Clarke himself does this when he talks about liberals not being willing to call them a hate group, etc.

"This narrative also fits in with the Republican base's feeling that racism against whites is a problem that is not being acknowledged and that is stronger than anti-black racism."

Meanwhile, Iowa Rep. Steve King's remarks on the MSNBC panel — "I'd ask you to go back through history and figure out where are these contributions that have been made by these other categories of people that you're talking about. Where did any other subgroup of people contribute more to civilization?" — inspired the hashtag #LessRacistThanSteveKing.

Quartz responded cheekily to King's remarks with a post titled "Dear Steve King: Here are some things not invented by white people." The list includes everything from mathematics and the seismograph to Pokemon and irrigation, and concludes with this statement:

"By defending white people's contributions to civilization, King is only carrying out one of their most longstanding ones — discounting the contributions of everyone else."

On Wednesday, King offered further comment on his earlier remarks to Politico, saying he felt one of his co-panelists was "disparaging a group of people" in saying the Republican Party won't be led by "old white people" in the future.

"If you're sitting here as a seated member of Congress on a national television show and asked to swallow something like that and curl up, again, no other group of people would take that," King said. He also elaborated on his remarks about history:

"Offering a further explanation, King said he pointed out 'that Western civilization is the most successful civilization the world has ever seen,' and the foundation of the United States' 'ideological thought is rooted in the Enlightenment in Europe, and then this country was born at the dawn of the Industrial Revolution, with that thought process and that coming over here to this country, like a giant Petri dish that was created for America to burst up onto the scene in the world. And we did a lot with that ...

" 'The sum total that's been contributed by Western civilization, it surpasses any other culture or civilization, partly because we borrowed from them along the way, and we're flexible enough to do that. And so I don't think we should apologize for our success. And the idea of multiculturalism, in that every culture is equal — that's not objectively true. And we've been fed that information for the last 25 years in this country, and we're not going to continue to become a greater nation if we don't look at this objectively.' "

This isn't a complete list of race-related happenings at the RNC, and let us remind you that this is just the beginning of convention season. We still have a long way to go, and the Democratic National Convention hasn't even started yet. With that in mind, we anticipate a sequel to this post in the not-too-distant future. Hit us up at codeswitch@npr.org if you've got anything to add.