Accessibility links
Who Is Delrawn Small? Why Some Police Shootings Get Little Media Attention : Code Switch Some police shooting victims like Alton Sterling and Philando Castile become national symbols. Their faces are splashed across the media, and their names become hashtags. So why are others forgotten? 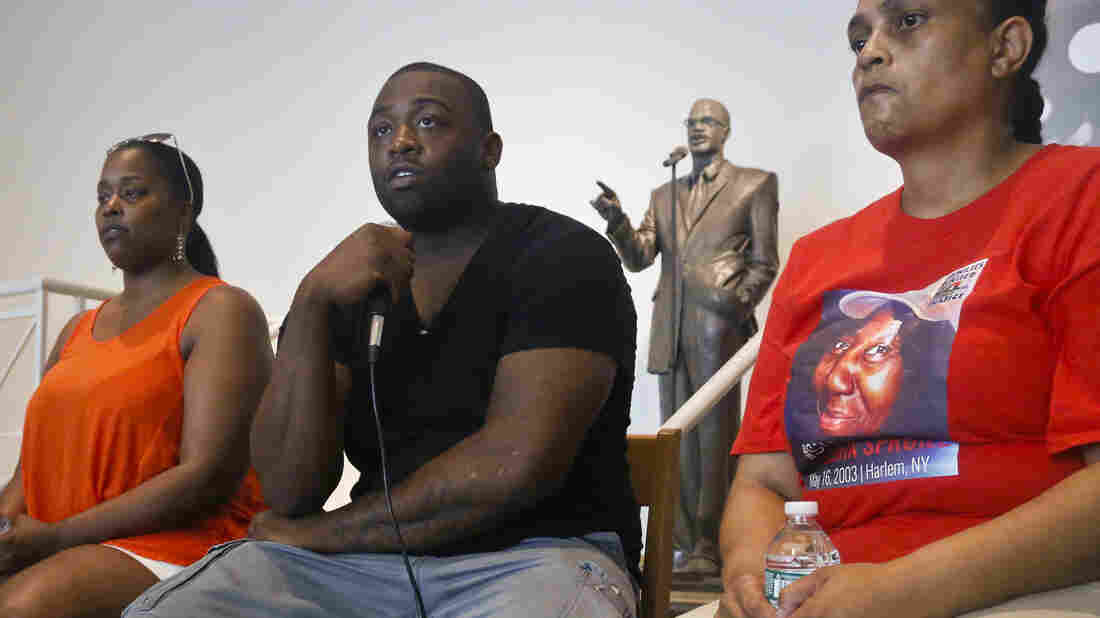 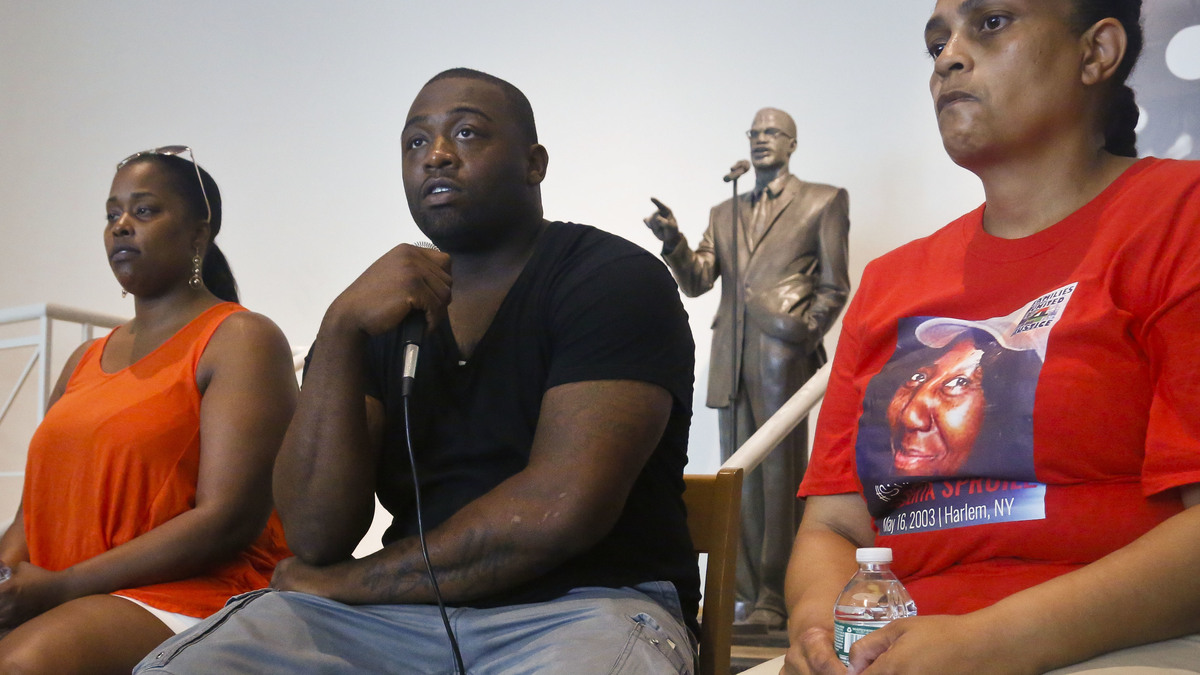 Delrawn Small's companion Zaquanna Albert, left, and his brother Victor Demsey, center, and Cynthia Howell, right, an advocate with Families United for Justice, an organization made up of families affected by police killings, attend a news conference Thursday July 14, 2016 in New York.

Charles Kinsey, a Florida health worker, was swept into the national debate about police and African-Americans after video of police shooting him went viral. Just over a week before, Alton Sterling and Philando Castile became familiar names and hashtags following their shooting deaths by police, and the videos of those incidents spreading across traditional and social media.

But fewer people know about Delrawn Small, an African-American man was shot to death by an officer in early July. So why did the names of Kinsey, Sterling and Castile wind up in headlines around the country and the world, while Small's death has been barely covered? What makes some victims of police shootings newsworthy, and others not?

William Drummond, a journalism professor at the University of California, Berkeley, explains that "the ones that editors and reporters immediately react to are the cases when somebody gets harmed, or shot, or killed, who did not deserve it." Kinsey is a prime example of this. He was shot by police while trying to coax an unarmed, autistic adult patient out of the street. The police instructed both men to put their hands up, which Kinsey did.

Jody David Armour, a law professor at University of Southern California who studies race and the law, suggests African-Americans who are hurt by police must be above reproach to get fair treatment in the media. "If you're a respectable Negro," he says, "that is, you're a law-abider and you do everything by the book, then you've earned some sympathy, empathy, care and concern."

But it's harder, says Drummond, with a case like Delrawn Small who was shot dead in New York by an off-duty cop after an apparent road rage confrontation. Drummond says Small was an imperfect victim. He had a criminal record and had been drinking before he was killed. Drummond says this does not justify Small's death but that "you can't put that in a headline; there are too many 'howevers.' "

Khalil Gibran Muhammad, a professor of history, race and public policy at Harvard's Kennedy School, says the media has a bad habit of reporting through the lens of the police instead of the victim immediately after an incident. "Should the media report what the police are saying as a way of signaling to the audience that this was a bad person, and maybe they got what they deserved?" he asks. Muhammad says that the police narrative often persists, even when those versions of the story turn out to be imperfect or just wrong.

USC's Jody Armour says he believes that cell phone videos have helped to sort things out, but Muhammad explains that "even without video, these stories should be given the same scrutiny, no matter who the victim is." Muhammad continues to say that, "If we only support worthy victims, then we're perpetuating the long-standing second class citizenship, particularly of African Americans."

The same is true if we only report on worthy victims.