Accessibility links
DOJ's Withering Baltimore Report Says 'What Black Folks Have Been Saying For Decades' : Code Switch "I don't know people who weren't aware of the stats that were just published. ... We already know the score," says D. Watkins, an author and journalist who grew up in the city. 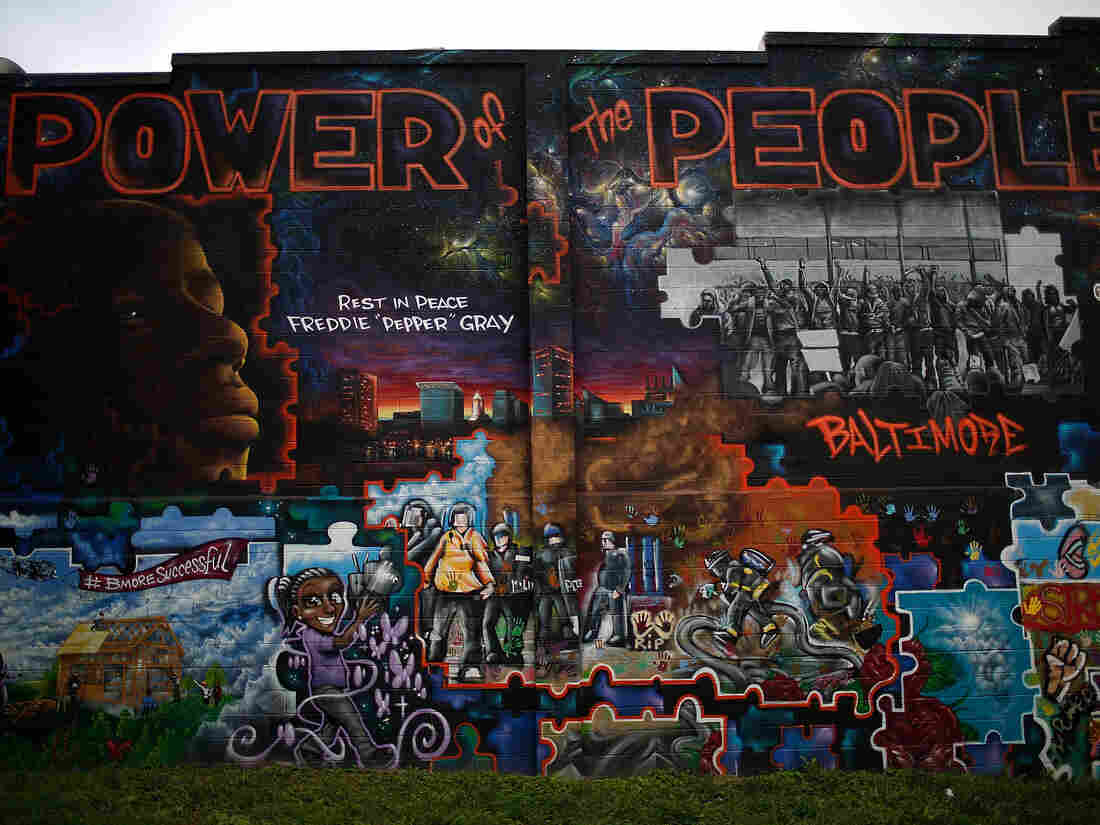 The Justice Department released a report Wednesday morning that was highly critical of the Baltimore Police Department for systematically stopping, searching and arresting the city's black residents, frequently without grounds for doing so. Win McNamee/Getty Images hide caption 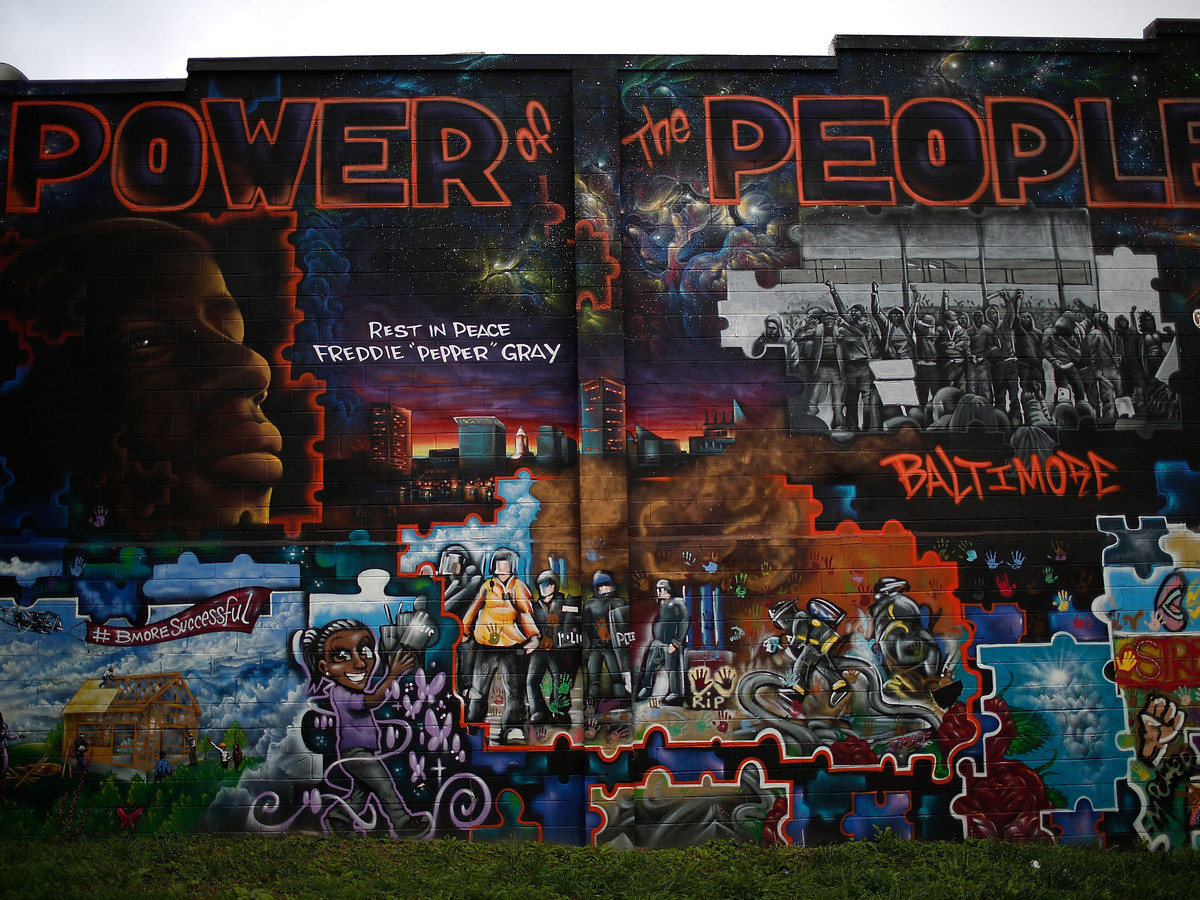 The Justice Department released a report Wednesday morning that was highly critical of the Baltimore Police Department for systematically stopping, searching and arresting the city's black residents, frequently without grounds for doing so.

On Wednesday morning, the United States Department of Justice announced the result of a yearlong investigation into the Baltimore Police Department, which found that BPD habitually violates the civil rights of its residents. These violations, the Justice Department found, have an outsized effect on the city's black population.

I spoke to some black folks who have been thinking about police-community relations for years, and they told me the investigation's findings didn't particularly shock them.

The investigation was spurred by the death of Freddie Gray, a 25-year-old black man whose spine was severed in the back of a police van last April. In its 164-page report, the DOJ wrote that "BPD makes stops, searches and arrests without the required justification; uses enforcement strategies that unlawfully subject African Americans to disproportionate rates of stops, searches and arrests; uses excessive force; and retaliates against individuals for their constitutionally-protected expression."

The Justice Department attributed these violations to systemic, longstanding problems within the police department, and said the violations have worsened distrust of police officers in Baltimore, "particularly in the African-American community."

The report's findings were far-reaching. Between 2010 and 2015, BPD recorded over 300,000 pedestrian stops (a number the DOJ believes vastly underrepresents actual stops). Those stops often lacked reasonable suspicion, and were mostly confined to black neighborhoods — 44 percent occurred in two low-income black neighborhoods that make up 11 percent of Baltimore's population.

In the same time period, the report found that BPD made "warrantless arrests without probable cause," stopped black residents three times as often as white, and arrested black folks on drug charges at five times the rate of white folks, despite comparable levels of possession. They were also found to have used unreasonable force against juveniles and people who presented "little or no threat to officers or others."

According to the investigation, the BPD has also failed to respond adequately to reports of sexual assault, resulting "in part, from underlying gender bias." It reported BPD detectives asked questions like, "Why are you messing that guy's life up?" when interviewing women who reported sexual assault.

The Baltimore Sun talked to Jacqueline Robarge, the founder of an anti-violence nonprofit in Baltimore called Power Inside. She told them the DOJ report contained "deeply troubling remarks that demonstrate an attitude about certain survivors of rape that those survivors have long known exist, and create a situation where they're re-traumatized again and again."

Robarge also told the Sun that the attitudes demonstrated in the report "allow violent predators to continue to prey on women specifically for their vulnerabilities. Those women include black women who are already being treated poorly by the police, sex workers, homeless women and women who may have a health issue, like addiction or mental illness."

D. Watkins is an author and journalist who grew up in the city and currently teaches at the University of Baltimore. Watkins says that for many locals, the Justice Department's findings were already common knowledge: "Every black person in Baltimore City already knows all of these things. We've been saying them for a long time. And it's kind of offensive that we would need some outsiders to come in to validate the things that we've already been saying for a really long time."

"I don't know people who weren't aware of the stats that were just published. I don't know them. We already know the score. Now, some people can't really put it in context. They don't understand that maybe there's a bigger agenda that's being put forth, using the police officers to maintain the system that's in place. But we already know that when they come into our neighborhood, it's not to protect and serve and get your cat out of a tree, or help you change a flat tire ...

"If you're from the bottom like me, you're not really looking for the government to swoop in and save you or help you. It's like they just exist. Maybe they help out people who have things. If you don't really have a lot then they're not really thinking about you."

Paul D. Butler is a professor at Georgetown Law, a scholar of criminal and race relations law, and a former Justice Department prosecutor. He says the DOJ report "corroborates about the police what black people have been saying for decades." When he first skimmed some of its findings, Butler says he realized that the report "reads more like a description of the Jim Crow South than what you would hope for a modern American city in 2016."

As for the feelings that serious concerns and complaints voiced by black people often go unheard until they're joined by white voices, Butler says this dynamic has deep roots. "During slavery, if an African-American was even allowed to testify against a white person in court, there would have to be another white person who corroborated what the African-American said. And in a bizarre sense, what these videos and official reports from the Justice Department are doing is corroborating what African-Americans have been saying for decades. So I certainly understand why some black people feel offended that it's taken evidence other than the word of black people to make this crisis evident."

Lester Spence teaches political science and Africana studies at Johns Hopkins University in Baltimore, specializing in black, racial and urban politics. He's well aware of the dynamics within police departments across the country, but some aspects of Wednesday's report did shake him. "It's not a matter of surprise as in, 'Oh my god, I didn't know they were doing this.' It's more like, 'Oh my god, this is worse than what I even would have expected,' " he says.

"We all have a general sense that the Baltimore Police Department needs reform, but when you really drill down on this stuff, it's like, son of a b****, what are they doing? The BPD makes [an estimated] several hundred thousand pedestrian stops per year. Baltimore's population is only 620,000. So it's like when you take those type of statistics, you realize that the problem is a lot deeper than you thought. And then when you take those statistics and you take them with the case of Freddie Gray, it becomes really clear that Freddie Gray died because the police were acting routinely."

Keith Humphrey, who is black, serves as chief of police in Norman, Okla., and has worked in law enforcement for 28 years. He says he's optimistic that BPD is committed to turning things around in light of this investigation.

He added that police officers "have a responsibility to have a guardian mindset, respect our community, and to remember that this is not war. It is not us versus them. We are all in this together." But, Humphrey continued, "The main thing is you've got to admit that there's a problem. We do make mistakes. When you make a mistake, you admit you've made a mistake."