Accessibility links
In Mariachi Music, A Distinctive Yell Speaks To The Soul : Code Switch The grito is a spontaneous burst of emotion — a shout — that is part of the mariachi tradition. Some younger Mexican-Americans are reclaiming the grito for a new generation. 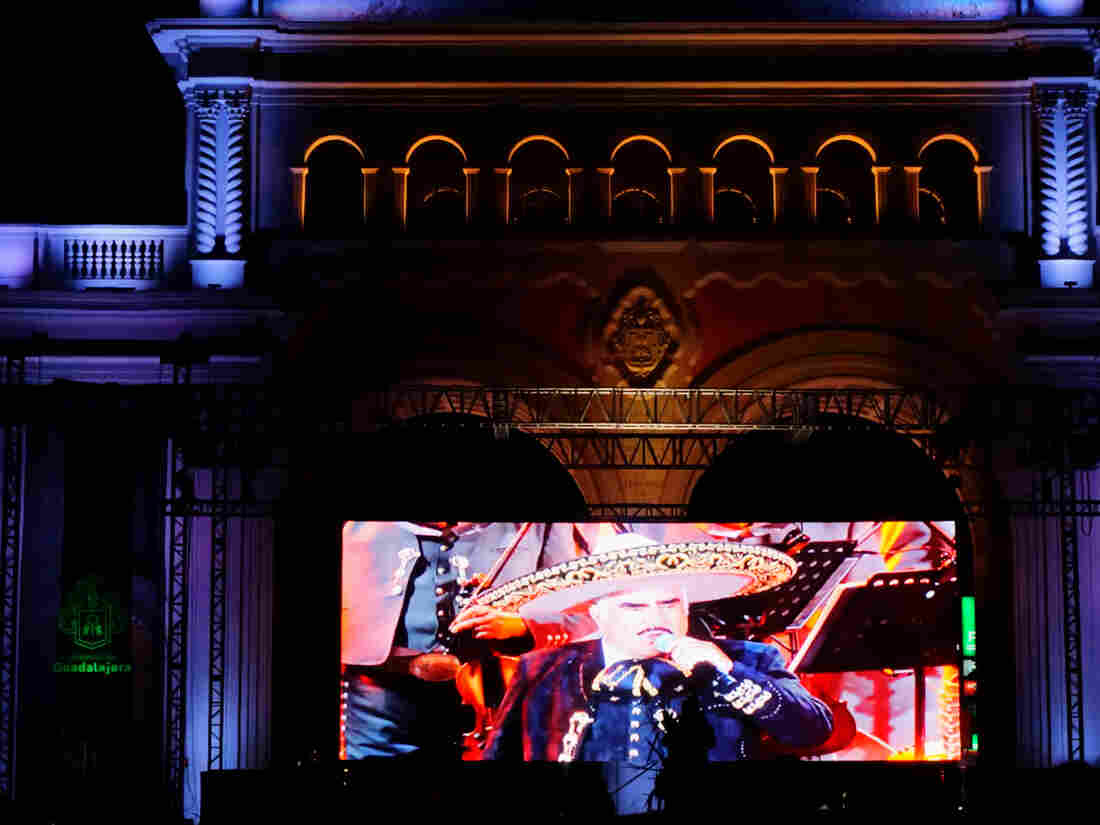 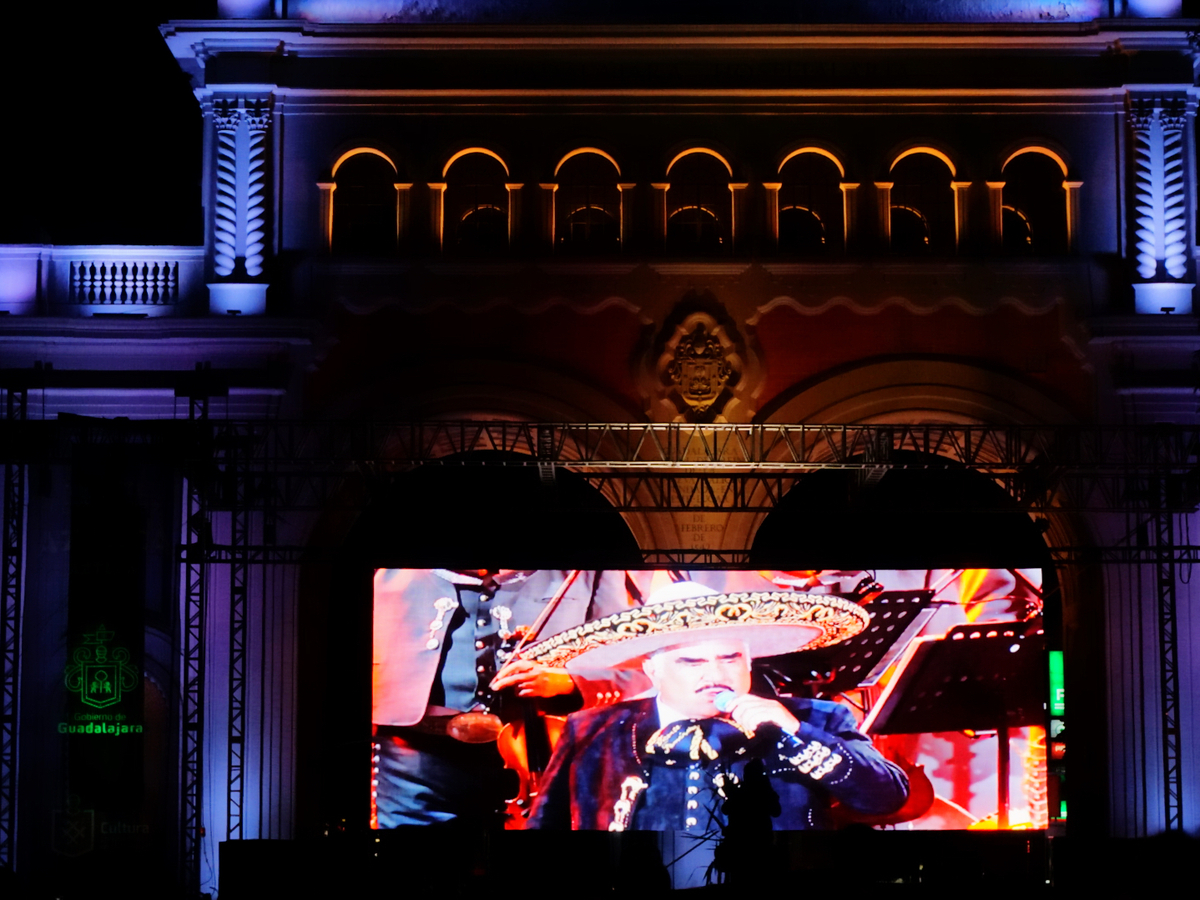 A screen displays the concert of Mexican folk singer Vicente Fernández in Guadalajara, Mexico, in April, when Fernández announced his retirement.

Do you know that feeling when a song moves you so much, you just feel like you have to add your own voice? Mexican culture has an answer to that: a cathartic, joyous yell called a grito.

Legendary Mexican performer Vicente Fernández, aka "Chente," performs the crazy tragic love song "Volver, Volver." "It's one of the most iconic mariachi songs of all time, performed by the most popular Mexican mariachi vocalist ever," says alt.latino's Felix Contreras. "And there is a championship grito at the top of the song."

Like lots of Mexican-American kids, Contreras and I grew up hearing the adults in our lives performing gritos when they listened to mariachi music at family barbecues, or cheering on friends and family at graduation.

"In my family, my mother and my grandfather, her step-dad, when we would be at family parties like Christmas or something like that, we'd be in the other room playing, we'd hear a really loud grito, we knew the party was on, it just took it to a different level," Contreras says. "It was the ultimate expression that we were really having a good time."

I am pretty sure I could identify my tíos and tías by their gritos, and many Mexican-American children begin finding their own grito voice early. 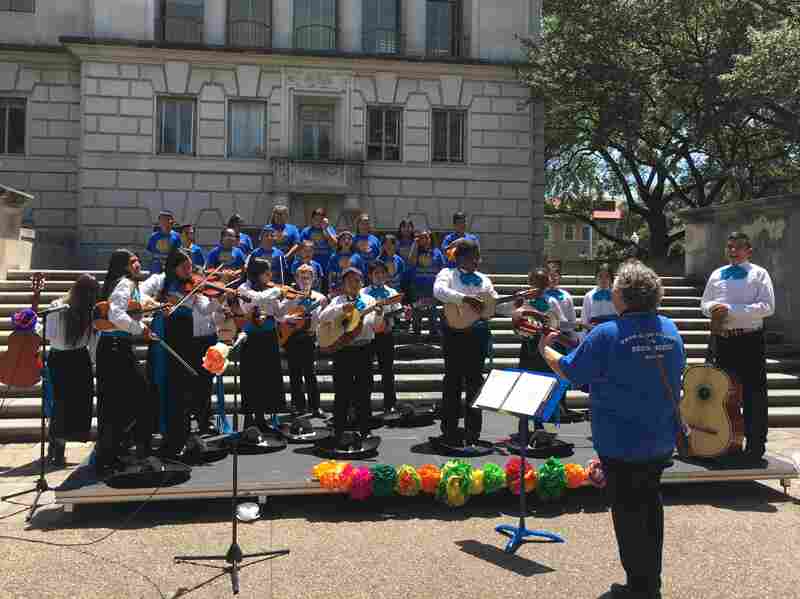 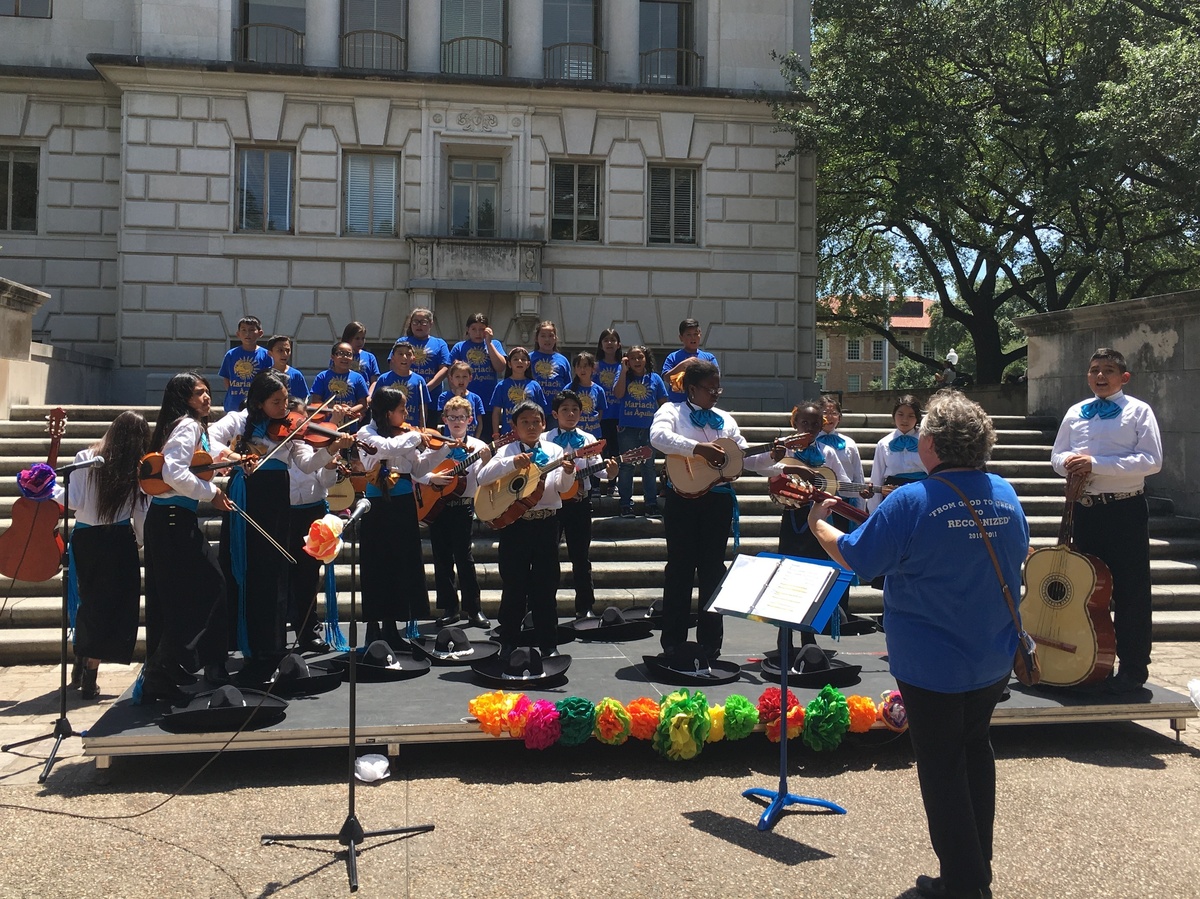 Angela Machado and her third-grade class perform at the University of Texas's Cinco de Mayo festivities.

Like many schools in Texas, students at Perez Elementary school in Austin have the opportunity to learn and perform mariachi music. Their teacher, Angela Machado, is too busy teaching them chords and song lyrics to teach them gritos. "It is not part of the curriculum necessarily but I know a lot of them do already know how," she says.

If they want to keep working on their gritos, these kids may have a chance in college. Ezekiel Castro is a lecturer at the University of Texas Sarah and Ernest Butler School of Music. He is also director of the school's mariachi ensemble and teaches about mariachi culture. The grito is an important part of that.

"The Mexicans are very emotional people," says Castro. "When they hear mariachi music, whether it's because of sorrow or because of joy, they do these gritos, these yells." Castro says his students do a much better grito than he does. "Some people are just exquisite with it. Others, you know, we just do the best we can."

Gritos aren't just emotional; they're political. One of Mexico's founding fathers uttered the first documented grito in history when he declared the war for Mexican independence. The president of Mexico does a more formal grito every year on that anniversary, as Enrique Peña Nieto did in 2015.

Laura Gutierrez teaches Mexican performance studies at the University of Texas. She says gritos are complex expressions. "They're like small narrative capsules, without the narrative that are full of layers of emotion," Gutierrez says. And belting out a great grito feels really good. "When you finally release the last gasp of air, there's relief," Gutierrez says.

Video producer Kathryn Gonzales rediscovered the grito at a 2014 Day of the Dead party in west Texas. "I was the only brown person at the whole party," Gonzales says. "There was a little conjunto band and I was so moved, I don't even really honestly remember the song, but I was compelled to do a grito."

But there were two things stopping her. "I thought well, A, I don't know if anyone here would know what that was and why I was doing it," Gonzales says. "And B, I thought I don't really know if I know how to do a good grito, like I'm not sure that I could pull it off."

So Gonzales teamed up with a developer friend and created the Grito App.

Since mariachi music is less popular among newer generations, not that many young people know how to do a good grito. Castro says that's no reason not to try. "Everybody has their own individual way of doing gritos," he says. "It's a great expression."

Felix Contreras tried to do a grito when he was a college student at Cal State University Fresno in the late '70s. His friends would have grito contests after a long night. "It was pathetic. I thought, 'Ugh, I definitely won't be doing that again.'"

And even though his alt.latino co-host Jasmine Garsd has been trying to get him to do a grito on-air, Contreras says he won't do it. "You have to not be afraid to be the subject of attention in a small world," Contreras says. "You have to use the front of the diaphragm, full of gusto, and release anguish and joy from your soul to do a successful grito."

Contreras has found himself listening to more mariachi music over the years. "It's an acquired taste as you get older, you experience life's heartbreaks and joys, the lyrics and the recitations and the performance resonates in a different way," Contreras says. "It has all the secrets to life in the lyrics. You don't know that when you're in your twenties."

"By the time you hit your forties, Chente knew what he was talking about," Contreras says. And you might feel inspired to try out your own grito.