Accessibility links
Kareem Abdul-Jabbar Calls Colin Kaepernick's Concerns 'Very Admirable' : Code Switch The basketball legend weighs in on the 49ers quarterback, who has decided not to stand when the national anthem is played before games. 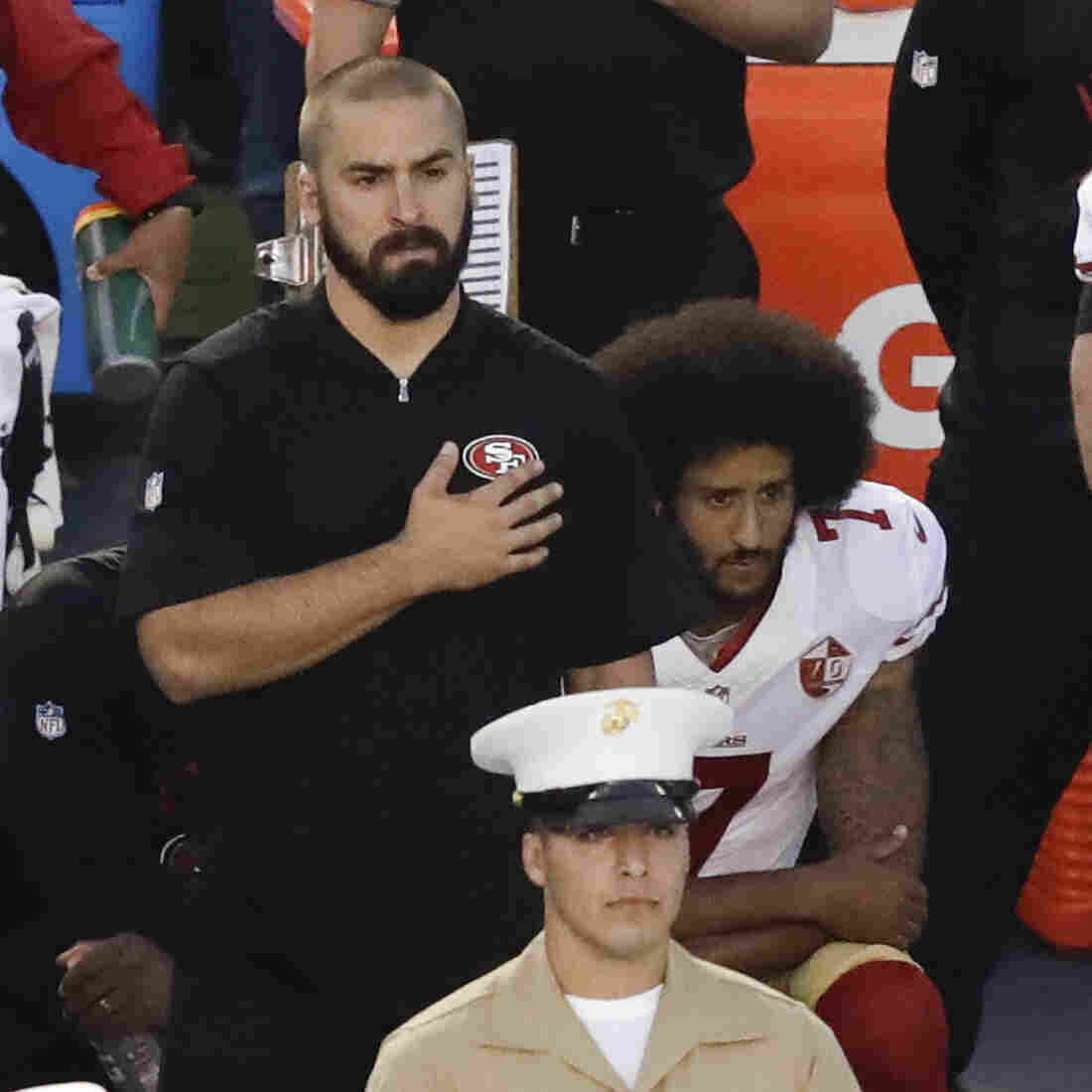 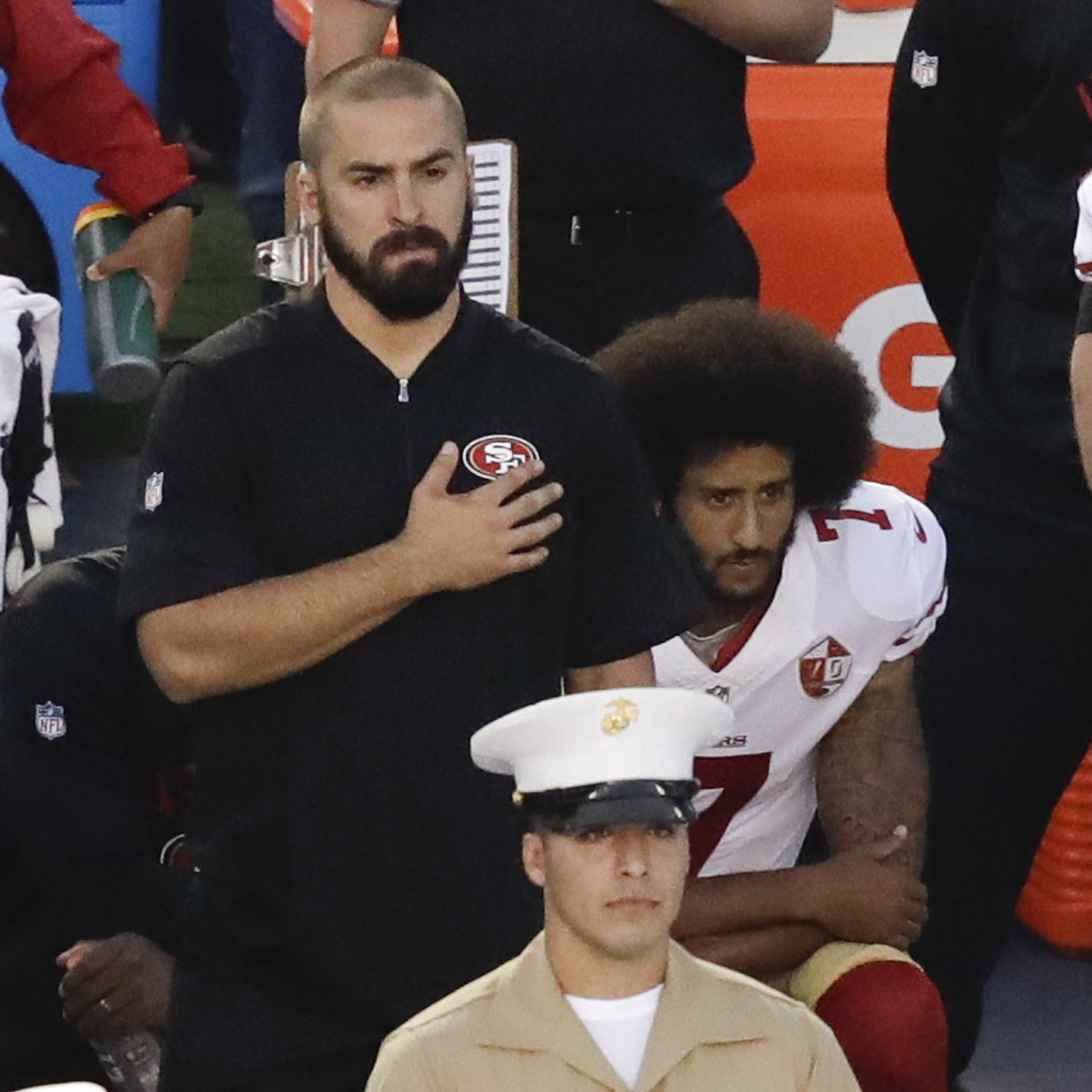 Colin Kaepernick, quarterback of the San Francisco 49ers, kneels during the national anthem before Thursday night's game in San Diego.

San Francisco 49ers quarterback Colin Kaepernick dropped to one knee rather than stand during the national anthem at a preseason football game Thursday night. It's an extension of the protest Kaepernick began last week when he sat as the anthem played before an earlier game, declaring, "I am not going to show pride in a flag for a country that oppresses black people and people of color."

Prominent athletes have used their celebrity to call attention to social issues before. Basketball legend Kareem Abdul-Jabbar started using his fame to confront racial injustice as a college player, then over the course of his 20-season NBA career, and he continues now in retirement. In his recent book, Writings on the Wall: Searching for a New Equality Beyond Black and White, Abdul-Jabbar probes issues of race, political correctness and social activism in a series of analytical essays.

Abdul-Jabbar sat down with NPR's Steve Inskeep to talk about Kaepernick, the broader role that athletes and celebrities play in shaping social movements and more. 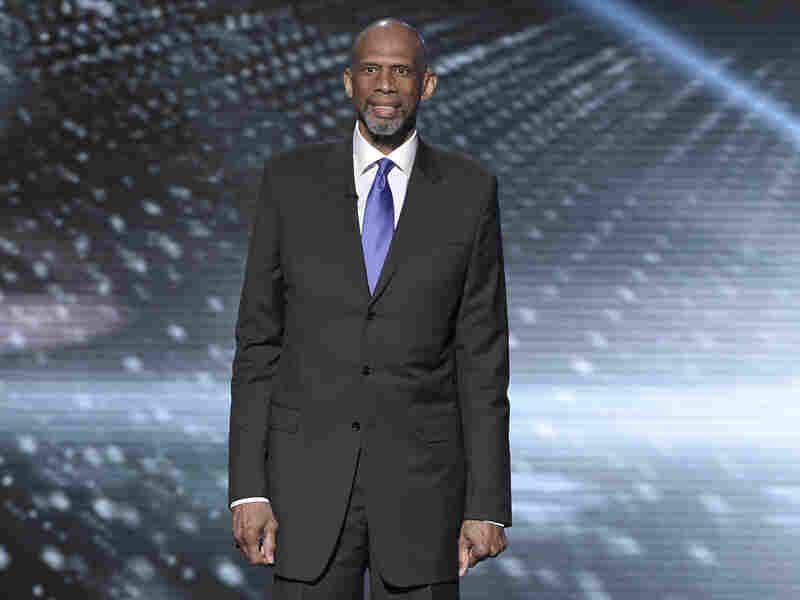 Kareem Abdul-Jabbar presents a tribute to Muhammad Ali at the ESPY Awards at the Microsoft Theater in Los Angeles in July. Chris Pizzello/Invision/AP hide caption 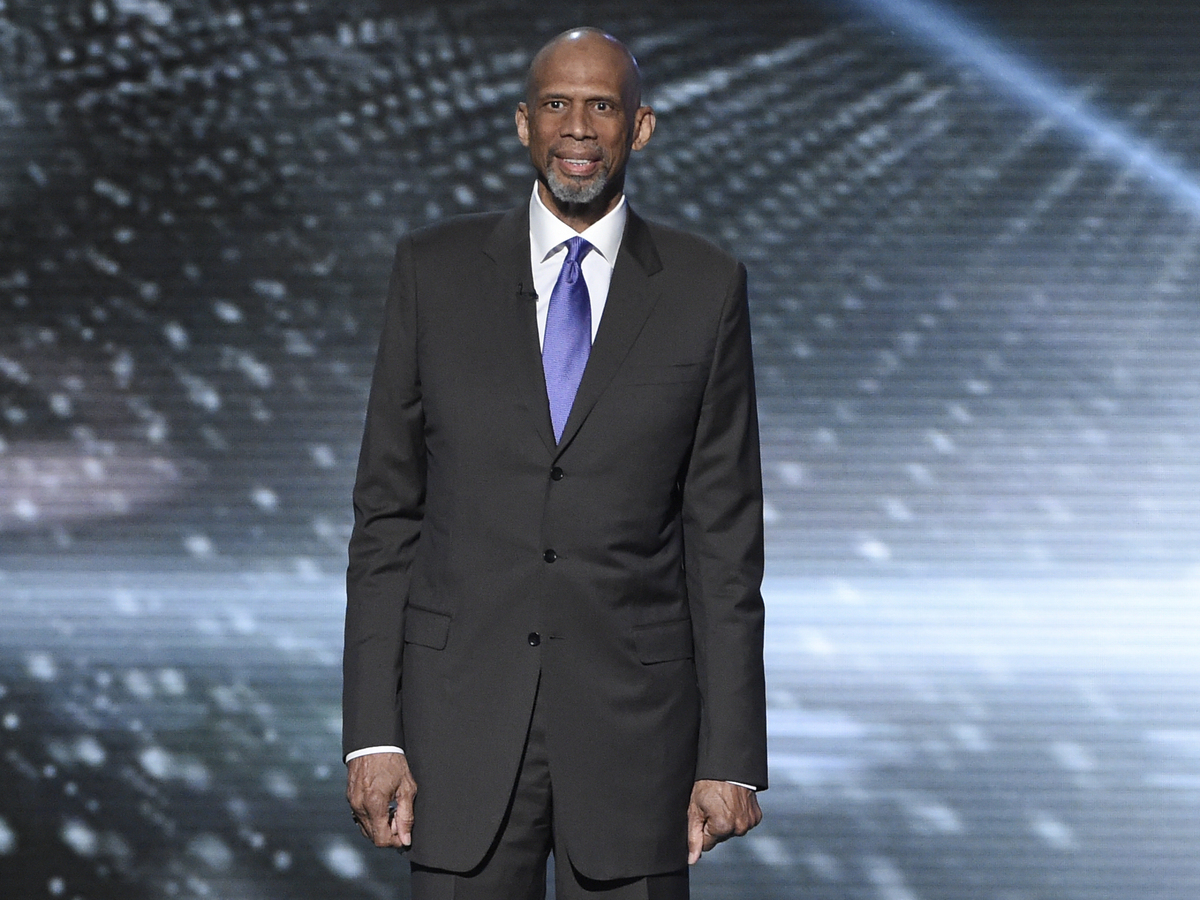 Kareem Abdul-Jabbar presents a tribute to Muhammad Ali at the ESPY Awards at the Microsoft Theater in Los Angeles in July.

Mr. Kaepernick is trying to get people to understand that he is concerned about a very important issue, which is the unnecessary killings of so many young black men. He's really concerned about that and he went to a great length in order to call attention to that issue. ... There are a lot of people who don't like his tone, or maybe the venue that he chose to make his statement. But the fact that he is concerned about a real issue I think is a very admirable thing, and I hope that he will continue to find ways to bring this message across to people in a positive way.

I remember when a lot of Vietnam vets came back, they burned the flag. And it was not to denigrate America, but to protest the fact that we were fighting an unjust war and people were dying unnecessarily. And that requires a very dramatic statement. And they used their opportunity to make that statement that way.

On the role of athletes in the political sphere

That timing [of an athlete] making a statement or not making it really has to do with the opinion and the insight of the individual involved. Some individuals see this as an important issue and have made statements about it, and some people have decided not to engage. The fact that Mr. Kaepernick is willing to engage, and willing to risk so much in order to bring attention to the issue, I think we have to admire him for that and respect his need to make the statement that he's making ...

I didn't make any statements the way Mr. Kaepernick is doing, but I was involved in, let's say, right after the assassination of Dr. King, I was involved in a demonstration on the UCLA campus, in 1968. We just stood along Bruin Walk, and I had people criticize me for standing out there. People felt like the fact that I had the opportunity to play in the NBA, I should be very grateful for that and not rock the boat. But the assassination of Dr. King was a tragedy for our country, and I wanted to demonstrate my concern for what was going on. And I took the opportunity to do that.

On the criticism that comes with speaking out

I knew that I would get criticized. I was on a show with Joe Garagiola where he suggested that I leave the country because I said at times America is not living up to its responsibilities to all of its citizens. And he said, "Well maybe you should go someplace else." But I choose to stay here and try to work to make America a better place. I think that is my patriotic duty, and I try to do it in that way, with that intention. With that motivation.

You know, that's his opinion. I notice that he wasn't very eager to go over to Vietnam. So I don't think he can throw any stones here in this instance.

On his critique of pushing nonvoters to the polls

Ignorance is not something that really lends itself to a meaningful discussion. So some of these people really shouldn't vote, because they don't know what the issues are. And I think people that are voting in the blind are doing a disservice to our country by not being better informed. ... I hope that everybody understands the issues and votes their conscience according to a well-informed effort on their part.

By knowing what the issues are and how things can proceed, given what the issues are, I think we get a lot more done when we have the electorate being well informed. And it is my fervent hope that a well-informed electorate is the result of all this. ... Some [people] definitely aren't prepared to vote. And that's unfortunate, but it's a fact.