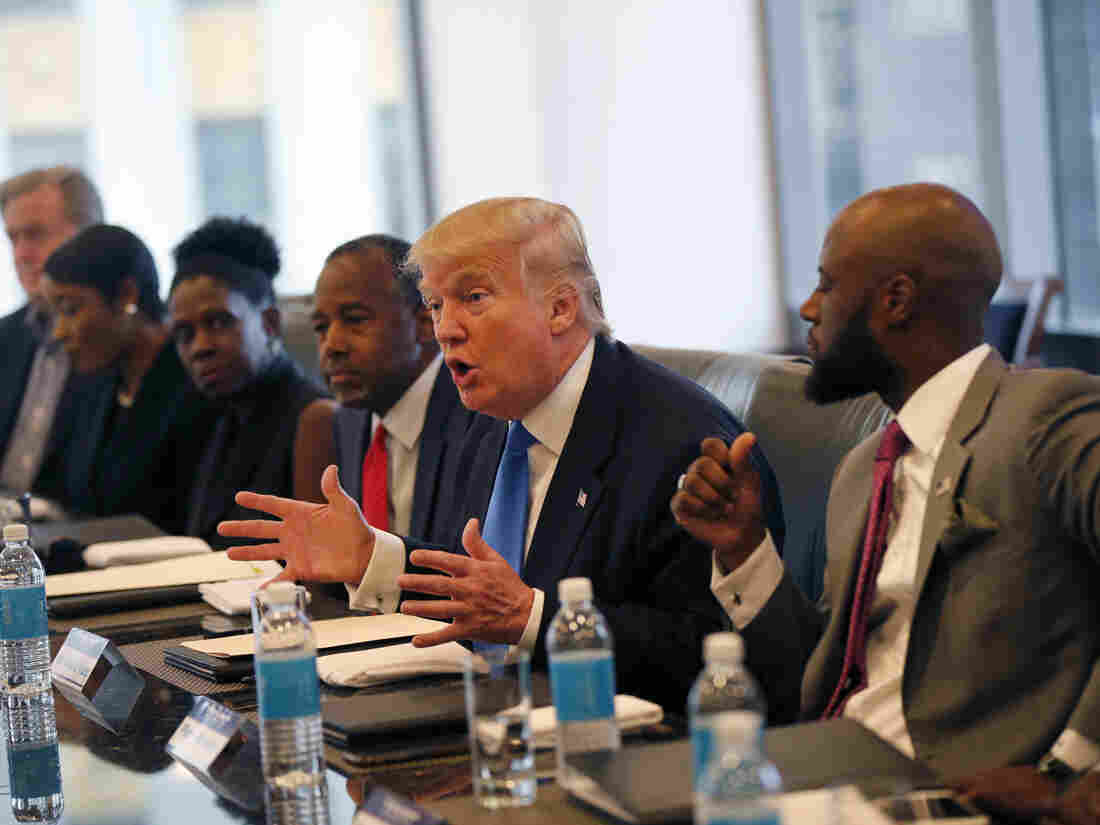 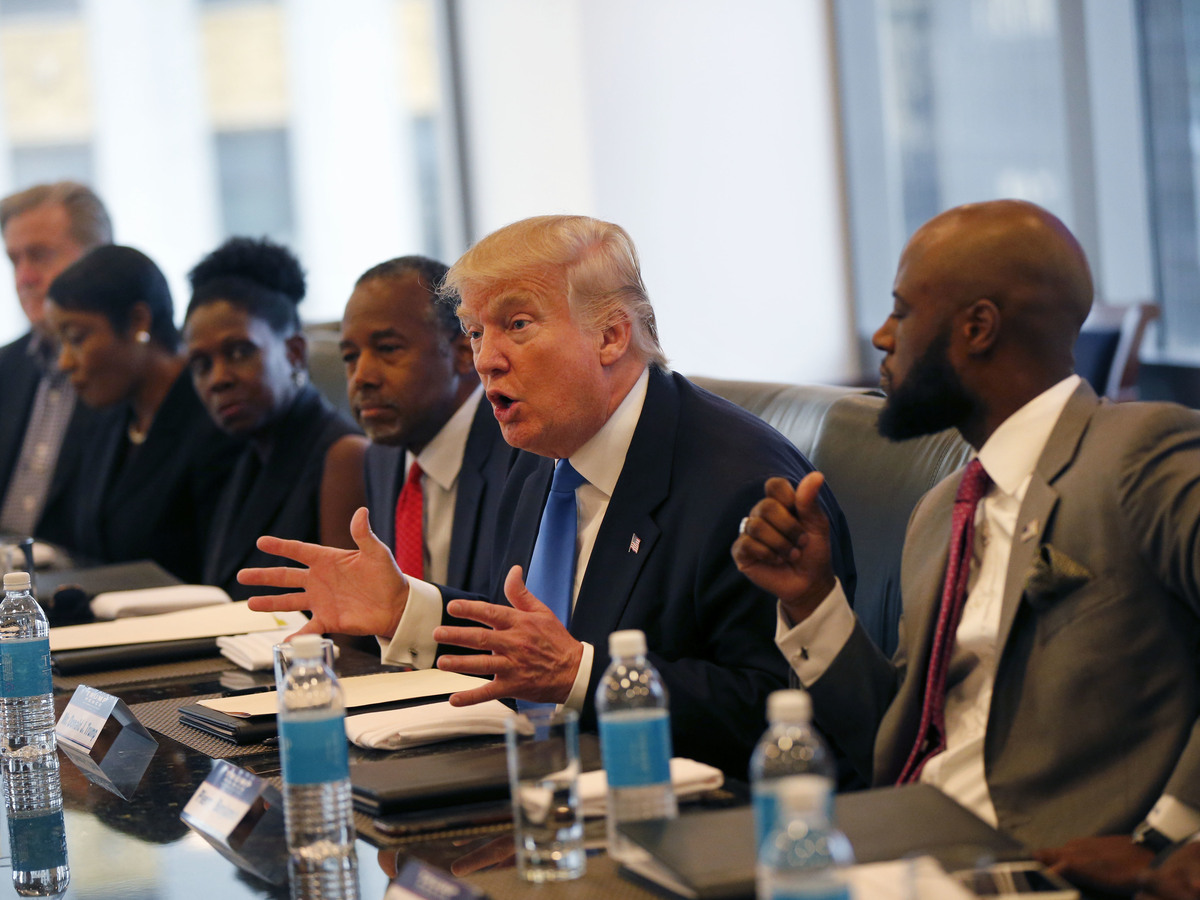 Republican presidential candidate Donald Trump holds an August roundtable meeting with the Republican Leadership Initiative in his offices at Trump Tower in New York. Dr. Ben Carson is seated next to Trump at center.

Donald Trump plans to take his black voter "outreach" to a predominantly African-American audience with a visit to Detroit this weekend, perhaps to quell criticism that his recent speeches about African-Americans have been delivered primarily to whites. That was certainly true during his August stop in Charlotte, N.C., where he began tailoring his message to black voters, who have been roundly rejecting him at the polls.

"If African-Americans give Donald Trump a chance by giving me their vote," he said, "the result will be amazing." The Republican presidential candidate cast Democrats and their nominee Hillary Clinton as the true bigots, who "have taken African-American votes totally for granted."

But Trump's inclusive Charlotte takeaway — one that seemed geared to the diverse, more progressive "New South" city — has been undermined by a series of clumsy and insulting overtures, and by his and his party's support for tactics that could remind many black voters of the old South.

It was in Pennsylvania, another battleground state he must win, where Trump echoed a familiar and shameful theme in American history: that some citizens — and their votes — are more legitimate than others. He suggested that "independent" monitoring was needed at voting places in urban parts of the state — Philadelphia, for example — to prevent citizens casting multiple ballots and other vaguely fishy goings-on. There is still a call on his "Make America Great Again!" website, asking for volunteers to sign up as a "Trump Election Observer" to "Help Me Stop Crooked Hillary From Rigging This Election!"

This all brings back images of Jim Crow-style poll-watching, of African-Americans and other voters of color having to somehow prove themselves worthy of participation in U.S. democracy, with every kind of proof never being enough. It was a call for intimidation masquerading as oversight, though it may take more than any challenge to discourage dedicated citizens such as Rosanell Eaton. She was a named plaintiff and witness in one of the challenges to the strict North Carolina voting law that was effectively killed — at least for this election cycle — by the U.S. Supreme Court earlier this week.

Her case illustrates the historical racist obstacles to voting, the spirit needed to overcome and the frustration that comes with fighting the same battles again and again. Born in 1921 in North Carolina, Eaton became one of the first African-Americans to register to vote in her county in 1942. First, she had to pass a written literacy test and recite the preamble to the Constitution from memory. Eaton went on to work for civil rights, registering more than 4,000 citizens to vote.

But even her voting rights were imperiled by the 2013 North Carolina voting law, because it limited forms of acceptable ID. The name on Eaton's birth certificate did not match the name on her driver's license or the one on her voter registration card. To assure her voting rights, she had to spend more than 20 hours and travel more than 200 miles to assemble all the required documents from various banks and government offices.

For Some Black Voters, 'Not Trump' Is The Number One Reason To Support Clinton

In addition, that law would've cut a week of early voting, ended preregistration for 16- and 17-year-olds, eliminated same-day registration, declared that votes cast out of precinct would not be counted and increased the power of anyone to challenge a voter's eligibility. When a federal appeals court struck down the law in July, it declared, "The new provisions target African Americans with almost surgical precision" and "impose cures for problems that did not exist."

The problem for Trump is that the state's Republican Governor Pat McCrory vigorously backed the law; it was McCrory's decision to appeal a lower court's ruling that brought the issue to the Supreme Court in the first place. And state GOP leaders haven't given up. In the latest development, the hours of early voting — set by GOP-controlled boards and particularly popular among African-Americans in the state, 22 percent of registered voters — have become another partisan battle.

This is a nationwide fight. Courts are turning an increasingly skeptical eye on regulations like North Carolina's that restrict voting, ruling against all or parts of laws in other states such as Pennsylvania, Wisconsin, Kansas and Texas. But as The New York Times pointed out, voting policy is enforced in cities and counties, in local races for mayor, city council and school boards, on a level that affects citizens' everyday lives. Voting rolls are being purged, polling places closed and districts shifted in ways that disadvantage minority voters.

Kristen Clarke is president and executive director of the nonpartisan, nonprofit Lawyers' Committee for Civil Rights Under Law, where a major focus is on voting rights. She said that the fight for voting justice is a challenge for the new administration, no matter which candidate leads it, which must work "to defend the right to vote for all Americans, but most especially for African Americans and other minority groups who continue to deal with the legacy of discrimination."

In a demographically and economically diverse nation, voting is one right that places all Americans on equal footing. There should be a desire to remove all obstacles to eligible citizens who want to do their civic duty. If Trump really wants to "Make America Great Again" for black voters, he needs to join that battle ... on the right side.

Mary C. Curtis is a journalist in Charlotte, N.C., and a columnist for Roll Call. Follow her on Twitter.