Accessibility links
'Only Cheap Talk Is Cheap': Mississippi Woman Hosts Conversations About Race : Code Switch Susan Glisson, a race relations consultant, says she's trying to "bring people together in a space so that we can really start having these conversations." 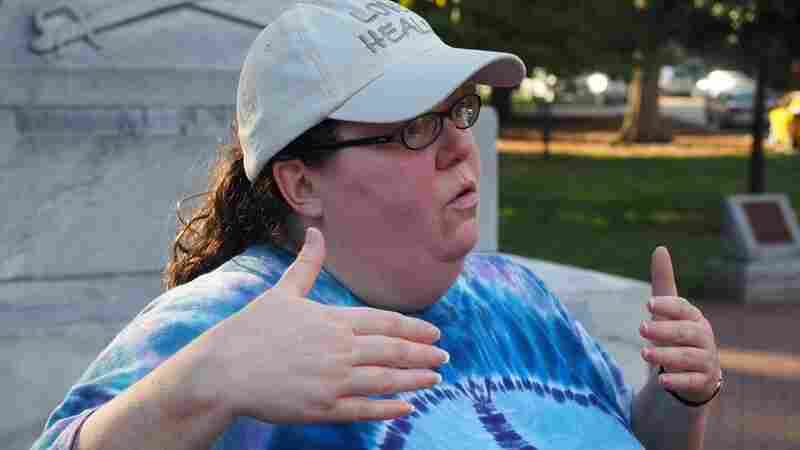 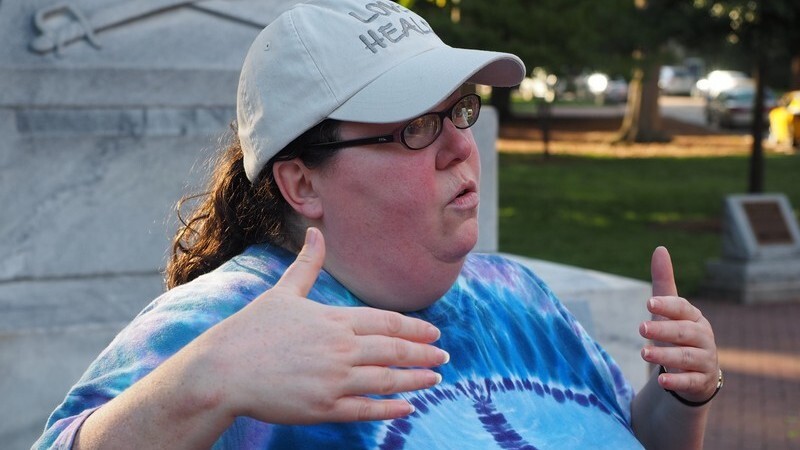 Susan Glisson, former director of the William Winter Institute for Racial Reconciliation at the University of Mississippi, facilitates discussions on slavery and race.

Susan Glisson stands on the campus of the University of Mississippi near a 1906 Confederate memorial that has long been at the center of racial strife here.

The statue — a Confederate soldier atop a gray obelisk — was a rallying point for a white mob opposing integration in a deadly 1962 riot. Decades later, Glisson recalls, she was a graduate student during dueling protests near the statue over the practice of flying Confederate battle flags at Ole Miss football games.

Flag supporters argued that black people just needed to get over slavery, and Glisson says she responded, "Well how 'bout you first? When are you going to get over the Civil War?"

The interaction didn't change any minds, but it did get Glisson on a different path. "It's arguing in this space that I started to figure out that what we ought to do is sit down and have a respectful conversation," she says.

But talking respectfully about race is not something most people do very well, especially in places with complicated racial legacies. Glisson says it's easier to fight over divisive symbols like the Confederate battle flag than to do the harder work of trying to dismantle racial barriers that have been fortified over generations.

"The symbol discussions are proxy conversations," Glisson says. "They're surrogates for the other conversation that we're afraid to have about race."

Now Glisson tries to get people to have those deeper conversations. One of the first places she went was Philadelphia, Miss., where the Ku Klux Klan killed three civil rights workers who were trying to register black voters in 1964.

Forty years later, a local group called the Philadelphia Coalition formed to call for justice after decades of silence in the community about the murders.

At the time, Glisson was founding director of the William Winter Institute for Racial Reconciliation at Ole Miss — an effort launched as part of President Bill Clinton's Initiative on Race.

She was a student of the civil rights movement and says she modeled the effort in Philadelphia on principles used by SNCC, the Student Non-Violent Coordinating Committee. For instance, empowering local leaders and using the "story circle" where people gather round and respond to a prompt.

"We've been conditioned to listen in order to counter someone's statement instead of listening to understand," she says. "That's not helpful."

Tucker says their goal is to "work ourselves out of a job."

Tucker is black, and from the Mississippi Delta. Glisson is white and grew up in rural Georgia. So they bring different cultural experiences to bear.

But there's no shouting at what they call "the Welcome Table," a space for respectful discourse.

And now it's spread from Mississippi to Birmingham, New Orleans and South Carolina.

Trust, Understanding And A National Conversation On Race

On a recent Saturday morning, Glisson, convenes a welcome table on the campus of the University of South Carolina in Columbia. Her ponytail is pulled through a baseball cap with the logo "Love Heals."

"We're going to get into your pair facilitator group," she instructs. "The task is going to be conduct a story circle."

She's here to train a team of faculty members who will take the Welcome Table model into communities throughout the state.

David Snyder and Alicia Anderson-Brown are working together to come up with a new prompt.

"What about 'Just when was the first time you noticed race in your family?'" asks Anderson-Brown.

"Maybe 'When was the last time you noticed race' would get people to an honest place quickly," Synder suggests.

Members of the circle get two minutes to reflect on the last time race was an issue. There are stories of a slight at a dinner party, offensive posts on social media, and a comment about "lighter skin tone" and sleek hair.

Moryah Jackson says it was hard to pick just one story. "Those conversations constantly come up. So I have a ton more now that I think about it — interactions with race in just the past week," Jackson says.

University of South Carolina President Harris Pastides says he was drawn to the "welcome table" model.

"Because it was not superficial," Pastides says, "not a one-time, let's all come together for one meeting, pat ourselves on the back, say we've got to change and then go home."

The university launched its Collaborative on Race and Reconciliation in the wake of the mass shooting at a historic black church in Charleston last year.

Chief Diversity officer John Dozier says Glisson is a good fit, in part, because of the similar racial histories of Mississippi and South Carolina.

Finding commonality, Dozier says, helps "bring people together in a space so that we can really start having these conversations."

Charleston native Bud Ferillo is helping coordinate the project. He says it took the shock of a racially motivated killing to open the dialogue here.

"Black folks in South Carolina have been waiting for this conversation for 350 years," Ferillo says. "And the white folks of South Carolina don't want to talk about it all."

Susan Glisson says there are typically people who question the wisdom of opening up "old wounds," and others who call for a more confrontational approach.

"I wish I had a dollar for every time a community leader told me 'talk is cheap. We've had too much talk,'" she says. "Only cheap talk is cheap."

"We don't stop to listen and understand what other people are going through," she says. "When we do that, that's when transformation happens."

Glisson says we can't have a national conversation on race until we learn to talk to, and trust each other on a much more intimate level.

She says her motivation is simple: "My mother taught me to leave places better than I found them."