Accessibility links
Imagining A World Without Prisons For Communities Defined By Them : Code Switch The activist Marc Lamont Hill argues that America needs to end its prison system. With crime at all-time lows, he might sway people of color who've long called for harsher punishment for lawbreakers.

Imagining A World Without Prisons For Communities Defined By Them

Imagining A World Without Prisons For Communities Defined By Them 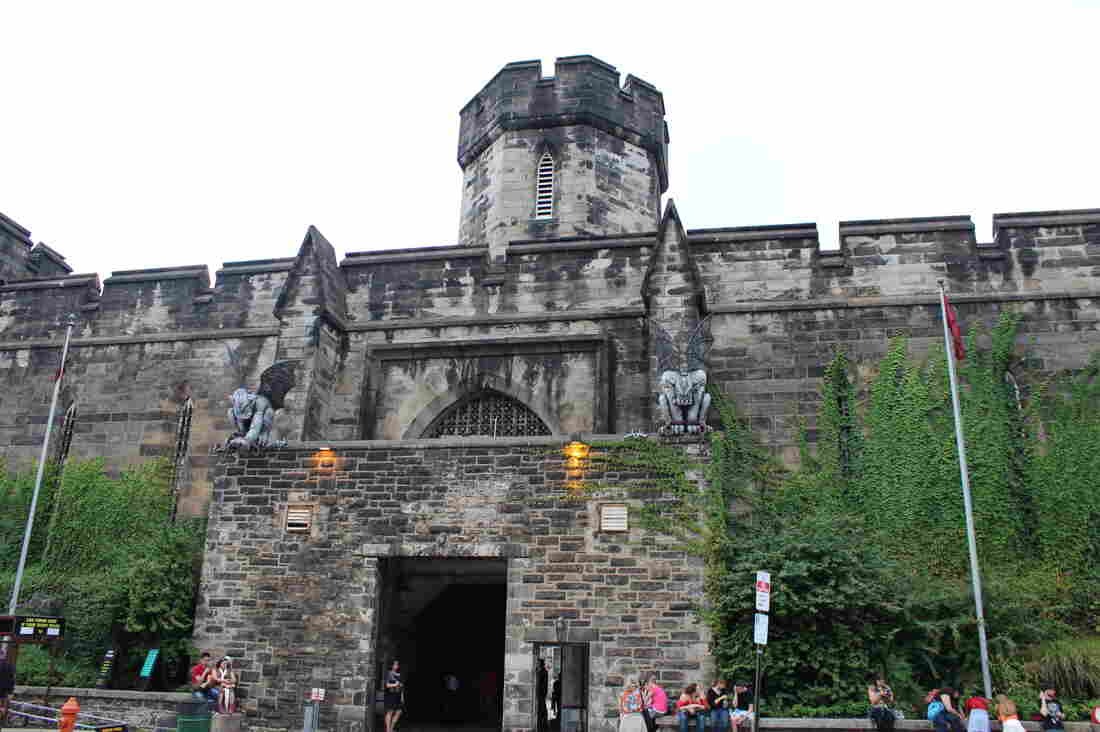 The hulking, shuttered Eastern State Penitentiary, a short walking distance from Philadelphia's downtown, was in many ways the first modern American prison. Almost from its opening in the early 19th century, there were people calling for it, and prisons like it, to be shut down because they felt they were inhumane. Shinya Suzuki/Flickr hide caption 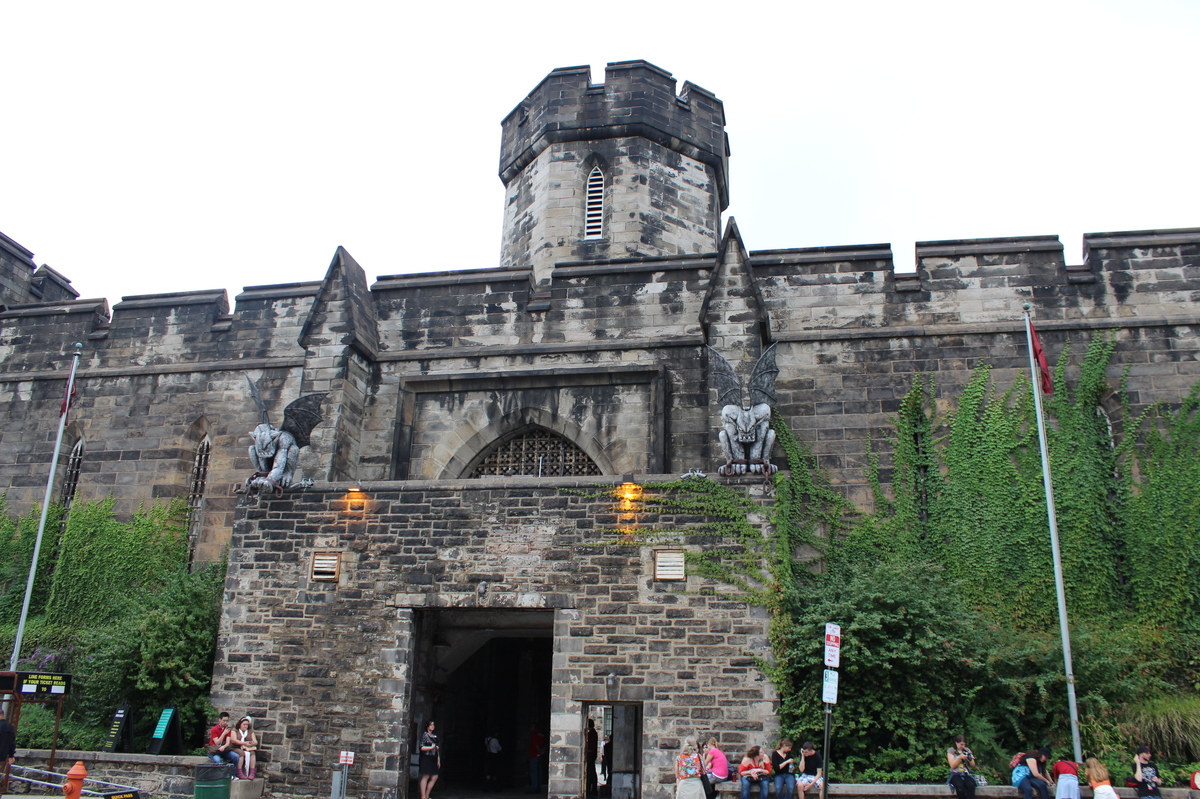 The hulking, shuttered Eastern State Penitentiary, a short walking distance from Philadelphia's downtown, was in many ways the first modern American prison. Almost from its opening in the early 19th century, there were people calling for it, and prisons like it, to be shut down because they felt they were inhumane.

When Marc Lamont Hill, a professor and activist who wants to abolish prisons, said that to me recently, I understood where he was coming from. Intellectually, at least. America's criminal justice system, with its machinelike orientation to conviction and incarceration, has grown so many tentacles that it tends to touch the lives of the people in communities of color who are not themselves up to anything shady. The sprawl of that system, and the economy based on it, mean that anyone in those communities can be treated like a suspected lawbreaker. It means that the immediate family members of a felon, for example, can be penalized by their proximity to them. And it means that calling the cops invites a whole lot of contact with the state that can quickly spiral in unintended ways.

It's that paradox that makes Hill, the author of Nobody: Casualties of America's War on the Vulnerable, from Ferguson to Flint and Beyond, want to abolish prisons altogether. I understand what he means, especially when you consider America's grim history of incarceration. Almost as soon as slavery ended in the United States, local and state governments found ways to funnel thousands of newly freed black folks into prisons. The period after Reconstruction saw the creation of a host of new crimes — changing employers without permission, vagrancy, not reporting to work on a weekend — that were ostensibly race-neutral but actually meant to ensnare black citizens. Most of us know that the 13th Amendment abolished slavery, but importantly, it leaves an exemption for servitude as "punishment for crime whereof the party shall have been duly convicted." Entire local economies in the post-slavery years — and some extant major American corporations — were built on this kind of convict labor.

What Does The Justice Dept. Decision To End Private Prisons Mean For The Future?

What Does The Justice Dept. Decision To End Private Prisons Mean For The Future?

By the 1890 census, the first in which there was an opportunity to count a generation of black folks born post-slavery, they were already overrepresented in America's prisons. Harvard historian Khalil Gibran Muhammad, a past guest on the Code Switch podcast, said that scholars interpreted the census data as evidence of a uniquely black criminality and not simply as evidence that officials were trying to control their newly emancipated countrymen. The idea that black crime was pathological became entrenched in the criminal justice system, Muhammad wrote in his book The Condemnation of Blackness, and it helped provide the broad basis for police to antagonize black folks at the behest, tacit and overt, of the broader white public.

But when I talked to Hill for a recent podcast, I resisted his call for prison abolition on a baser, less thoughtful level. My reaction was related to what he called the "But What About My Cousin?" argument. That is: I hear what you're saying about how messed up the justice system is, but have you met my cousin? That dude is crazy and needs to be locked up!

None of my cousins made me feel that way, but I knew the sentiment he was underlining — the feeling that your neighborhood is at the mercy of certifiably dangerous people who need to be behind bars. I still remember when our old row house was burglarized just before I started the fourth grade, crack vials sprinkled all over our dreary, tan carpet. I remember the dude I grew up with, whose well-known penchant for violence ended when he was gunned down after kidnapping the child of some other shady dude.

I had the sense that these things just happened where we lived and that there was nothing anyone could do — nothing legal, anyway — to stop it. There are personal costs to living in a place like that, but there are broader social ones, too. These are neighborhoods that are deeply tied together by residential segregation, which means that folks often know the victims and perpetrators of those crimes. (One of the great, frustrating ironies of tough-on-crime rhetoric is that it so often seems to focus on white folks' outsize fear of violent street crime while ignoring the fact that black folks are much more likely to be its targets.)

It's in this vise that so many black communities have long found themselves — at once aggressively overpoliced and disastrously underprotected. The Department of Justice's scathing report on Baltimore in the aftermath of Freddie Gray's death, for example, found both routine, widespread abuse of black citizens by the police and a casual indifference from law enforcement when it came to investigating serious crimes like rape in black neighborhoods. It's those intertwined realities that gave birth to both "F*** Tha Police" and "911 Is A Joke."

So I was surprised — and a little unnerved — by my reaction to Hill's declaration that we move away from locking people up. Had I unknowingly ingested the rhetoric of people the sociologist Michael Javen Fortner describes in "Black Silent Majority" — black folks who for decades clamored for tougher crime laws and more aggressive law enforcement in their communities?

Fortner found a quote from an old black newspaper in New York calling for tough-on-crime measures. "Clean out this scum — and put them away as long as the law will allow," one of the editors wrote. A lot of us in black neighborhoods grew up hearing stuff like that.

Hill gets all this, certainly. He's no soft touch. He's a proud gun owner. Like me, he's a Philly dude. We went to the same high school in a tough, neglected neighborhood in North Philadelphia, and we both came up on the back end of the crack era, when inner cities across the country were being ravaged by violent crime.

And in some ways our hometown is the birthplace of the fight over the prison system. Eastern State Penitentiary, not far from downtown, was the first modern penitentiary in the world when it opened in the early 19th century. It pioneered the practice of solitary confinement, which its administrators believed would provide space for reflection on one's misdeeds — hence the penitents were sent to the penitentiary. We've continued the tradition of using the language of moral rehabilitation when we lock people up. ("Department of Corrections.") Almost immediately after Eastern State's founding, though, local Quakers began arguing that the prisoners were being treated inhumanely, and they called for an end not just to that prison but to the prison system overall. Though they would be drowned out in their argument, the movement to end prisons never fully petered out.

Like other critiques of the justice system, the idea that we should do away with prisons has gotten more oxygen in recent years. That might be because the steady declines in violent crime to near-record lows have made the draconian, bury-them-under-the-jail impulses of the previous decades harder to justify in fiscal or moral terms. There are now people of all ideological stripes who favor resisting those impulses by, say, decriminalizing nonviolent drug offenses or pushing against mandatory minimum sentencing. But many prison abolitionists feel such reforms don't go far enough; that "reform" implies a broken prison system and not one functioning exactly as it was meant to, as a mechanism of social control. Hill's one of them. That's why he reacted to me the way he did.

To do what Hill proposes would require rethinking a lot of our received wisdom about human nature. It would require that we acknowledge the historically conditional humanity America has afforded black folks, which allowed prisons and race to become so fused. But on a more basic, personal level, Hill is asking us to forgo a desire for officially sanctioned recompense against predators — for revenge, really — that others have long taken for granted. That is a tall ask. But there might be an opening in this moment, with inner cities safer than they've ever been, for people like me to consider doing away with prisons, even while that system represents a kind of justice that's always been denied us.