Accessibility links
CEO Of AT&T Randall Stephenson Joins Starbucks and Ben & Jerry's In Taking On Race : Code Switch AT&T's CEO, along with Ben & Jerry's and Starbucks, have waded into the rough waters of race. We ask some experts whether that makes a difference, and the answer is ... complicated. 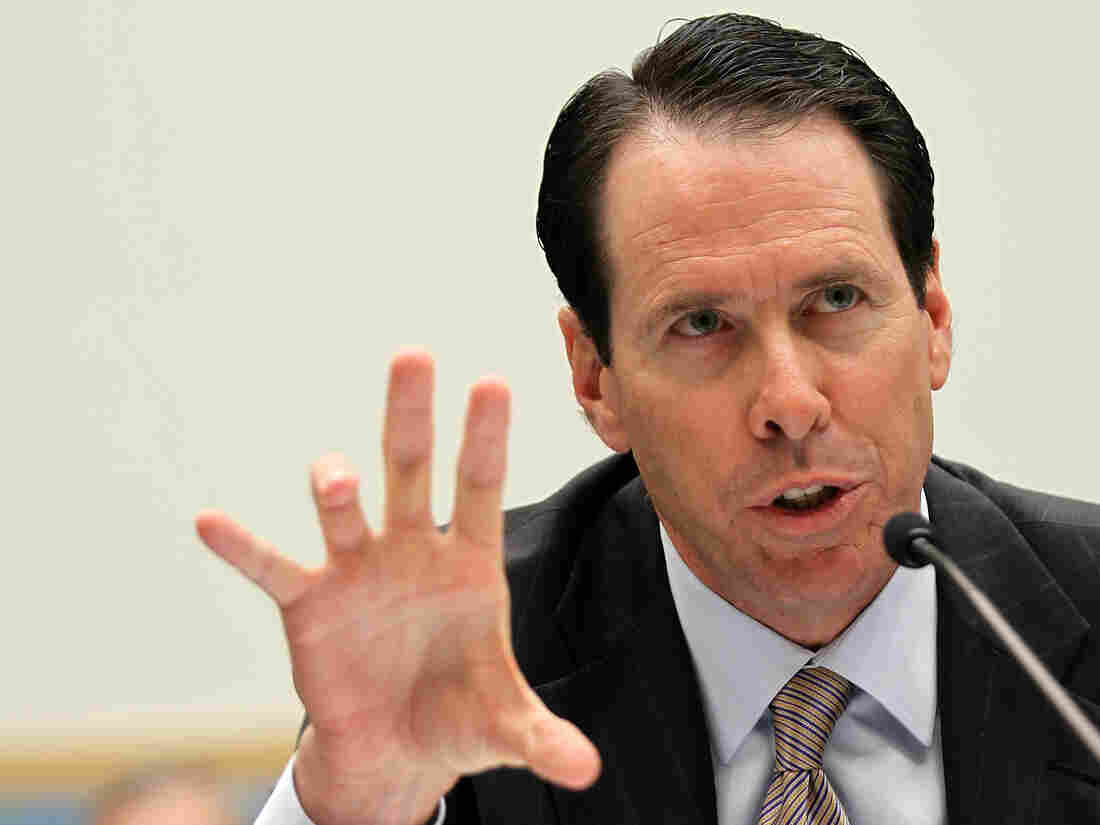 Randall Stephenson is the chairman, CEO and president of AT&T. Why is he talking about Black Lives Matter? Alex Wong/Getty Images hide caption 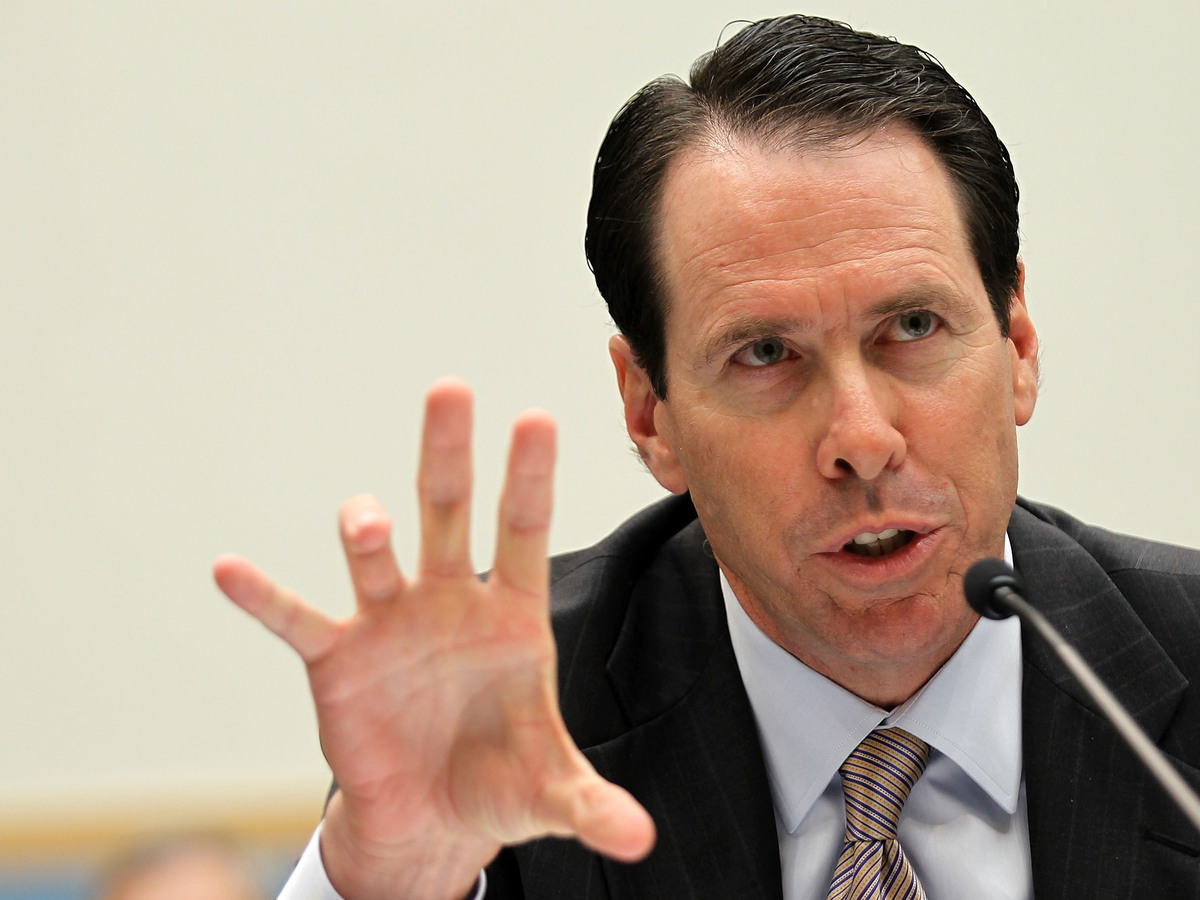 Randall Stephenson is the chairman, CEO and president of AT&T. Why is he talking about Black Lives Matter?

Randall Stephenson, the CEO of AT&T, has been making headlines of late with his proposed $85 billion merger with Time Warner. But just before those plans were announced last month, Stephenson raised eyebrows for another reason. In a room full of AT&T employee support groups, Stephenson gave an impassioned speech on race relations.

"Our communities are being destroyed by racial tension, and we're too polite to talk about it," he said. "I'm not asking you to be tolerant of each other. Tolerance is for cowards. Being tolerant requires nothing from you but to be quiet and to not make waves, holding tightly to your views and judgments, without being challenged. Do not tolerate each other. Work hard, move into uncomfortable territory, and understand each other."

He went on to explain some of the logic that informed his views:

"When a parent says, 'I love my son,' you don't say, 'What about your daughter?' When we run or walk for breast cancer funding and research, we don't say, 'What about prostate cancer?' When the president says, 'God bless America,' we don't say, 'Shouldn't God bless all countries?' And when a person struggling with what's been broadcast on our airwaves says, 'Black lives matter,' we should not say, 'All lives matter,' to justify ignoring the real issues."

Stephenson is the latest in a line of corporate leaders who have stepped outside their traditional purview to address racial issues in the United States. On Oct. 6, the ice cream company Ben & Jerry's published a blog post saying, "Systemic and institutionalized racism are the defining civil rights and social justice issues of our time."

And following protests in Ferguson, Mo., in 2014, Starbucks CEO Howard Schultz called an all-staff meeting to talk about race. Afterward, he said, "I've always believed that core to our success has been our commitment to achieve the balance between our social conscience and responsible commerce. ... Doing what is right for society and doing what is right for business cannot be mutually exclusive endeavors."

It takes action even to get to the words. Words are important. They really matter, and where and how often they get said matter.

You could fill football stadiums with people who have pushed for more candid conversations on race; who have explained why it's important to say something like "black lives matter"; who have made themselves vulnerable by fighting for racial equity. But those words mean something different coming from the head of a multibillion-dollar company. And while words alone might not be enough, they aren't nothing.

Rinku Sen is the president and executive director of Race Forward, a nonprofit based in New York City and Oakland, Calif., that focuses on racial justice. She says that such statements are often a sign that important work has already begun. "It takes action even to get to the words," Sen said. "Words are important. They really matter, and where and how often they get said matter."

Here are more of Stephenson's words:

"Sadly, racial tension is ripping apart the very fabric of our communities right now. And it's troubling to watch what's happening today in Charlotte. What's happened in Ferguson, Mo. The killing of black men in Falcon Heights, Minn., or Baton Rouge, La. The murder of five police officers in Dallas. The murder of police officers in Baton Rouge. The mass killings in Orlando. I could go on, but folks, you get the idea. We got a problem."

Speeches like that signal to other people in high positions that race is something they need to be thinking about, said Lee Drutman, a political scientist at the think tank New America and the author of The Business of America is Lobbying.

"We all look around and kind of figure out what people like us should think," Drutman said. "When you're out on the weekend talking with your friends, and people say, 'Oh, Black Lives Matter is an issue that I care about,' well ... maybe I should care about it. We're all looking to understand the world. ... So to the extent that [Stephenson is] putting it out there ... other CEOs might look around and think yeah, this is something CEOs should care about."

Experts on organizational diversity say there are other benefits: When company leaders talk about tough issues like race relations, they're showing their employees it's all right to do the same. They're also modeling the tone and tenor good conversations can take. And it frees employees to talk about how they're being affected by race.

That's not to say that talking about race is fail-safe. When companies take public positions on contentious issues, they risk the wrath of people who disagree with them and the doubts of skeptics who suspect a hidden motive.

Talking about race is "like a minefield," where good intentions can have bad consequences, said Evan Apfelbaum, a social psychologist and professor at MIT's Sloan School of Management.

"Like in any situation, if the position is not articulated carefully, or even if it is, race is a superdivisive topic in the United States," Apfelbaum said. "You risk alienating huge segments of the population. So that is risky."

Ben & Jerry's has been subjected to multiple boycotts over the years for stances the company has taken on social issues. After the "Black Lives Matter" blog post, the law enforcement group Blue Lives Matter asked people to "send a message" to Ben & Jerry's by boycotting its ice cream.

"Our poor consumer affairs people, they spoke to a lot of unhappy people," said Chris Miller, social missions activism manager for Ben & Jerry's. He said the company's statement "has generated a lot of buzz on digital and social channels. Most of it is overwhelmingly positive. Some of it, I think, is a little misunderstood. And to be honest, there's some really racist, hateful stuff that has been slung our way. But ... what this has done is to start a conversation with our fans and consumers, and also continue the conversation within our company, and I think that's incredibly important."

Stephenson's speech has been met with some skepticism, coming, as it did, just before AT&T announced that it wanted to merge with Time Warner.

"You may have noticed that AT&T is trying to effect a major merger," Drutman said. "And one of the things that a lot of companies do, telecom companies have done this particularly, is they try to build support among groups of minorities, so they'll suddenly try to cozy up to La Raza or the NAACP."

That doesn't mean that Stephenson didn't genuinely believe what he was saying, Drutman said. It just points out the multiple levels of calculus that go into any business decision, he said.

The people who heard Stephenson's speech might already be thinking, "What next?" But it's OK if actions and words don't come at exactly the same time, Sen of Race Forward said. Change, she said, is hard, tedious work.

"It takes unsexy, granular work planning," Sen said. "You need goals and deadlines, and someone has to be assigned to them."

Starbucks and Ben & Jerry's moved beyond words. That 2014 Starbucks meeting led to "Race Together," a campaign that encouraged baristas to start racial dialogues with customers. And while Race Together was criticized for being naive and unmanagable, it inspired other ideas. Starbucks vowed to hire 10,000 16- to 24-year-olds, mostly black and Latino, who weren't employed or in school. The company has also committed to opening new stores in low- and medium-income neighborhoods (like Ferguson, Mo.) and carried Just Mercy, a book about racial inequality in the legal system, in its stores for a month.

Ben & Jerry's has for decades been involved in progressive advocacy campaigns. At the beginning of 2016, the company launched a public campaign calling for reauthorization of the Voting Rights Act in an attempt to remove barriers that disproportionately keep African-Americans from voting. But Miller says he hopes that alongside other companies, Ben & Jerry's will continue to push race conversations forward.

"Whether it's the CEO of AT&T talking with his employees, or Ben & Jerry's talking with our fans and consumers," Miller said, "it's my hope that this begins a conversation and a dialogue which continues. It's certainly something that we're committed to continuing. As I suggested, we really see this statement as a beginning, not an end."