Accessibility links
Native Americans At Standing Rock Participate In Centuries Old Protest Tradition : Code Switch Many say the Dakota Access Pipeline resistance is beyond anything they've experienced before. But there are preludes in Native American history, and you don't have to look too far back to find them. 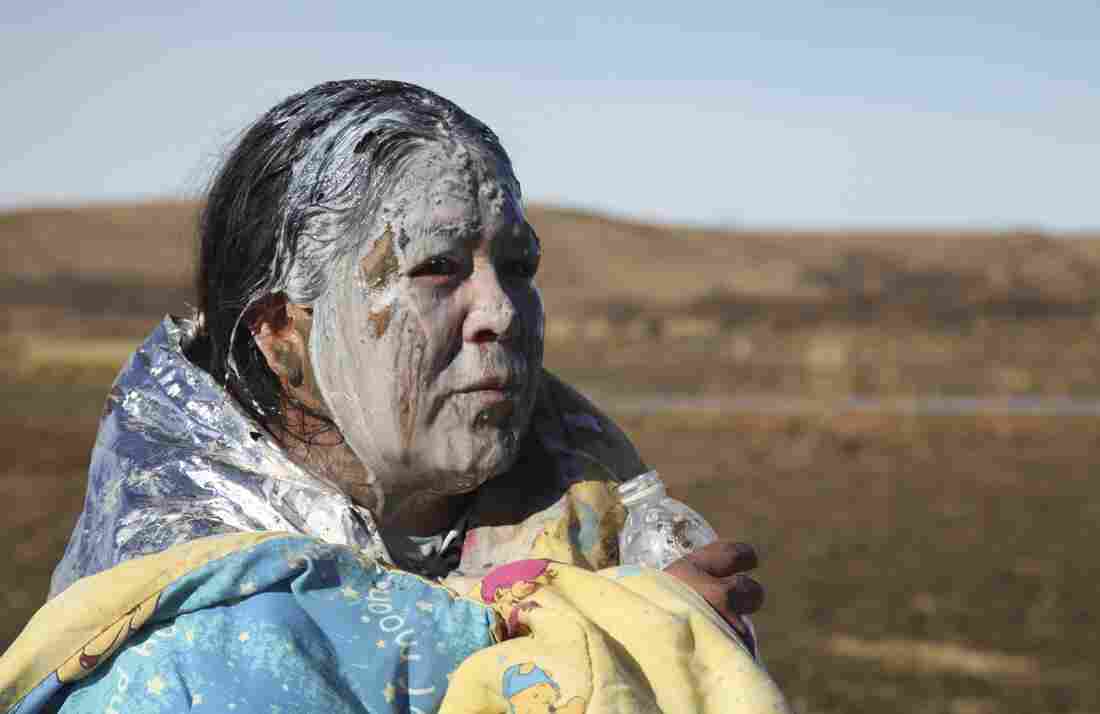 Tonya Stands recovers from being pepper sprayed by police after swimming across a creek with other protesters hoping to block construction of the Dakota Access Pipeline, near Cannon Ball, N.D., on November 2. John L. Mone/AP hide caption 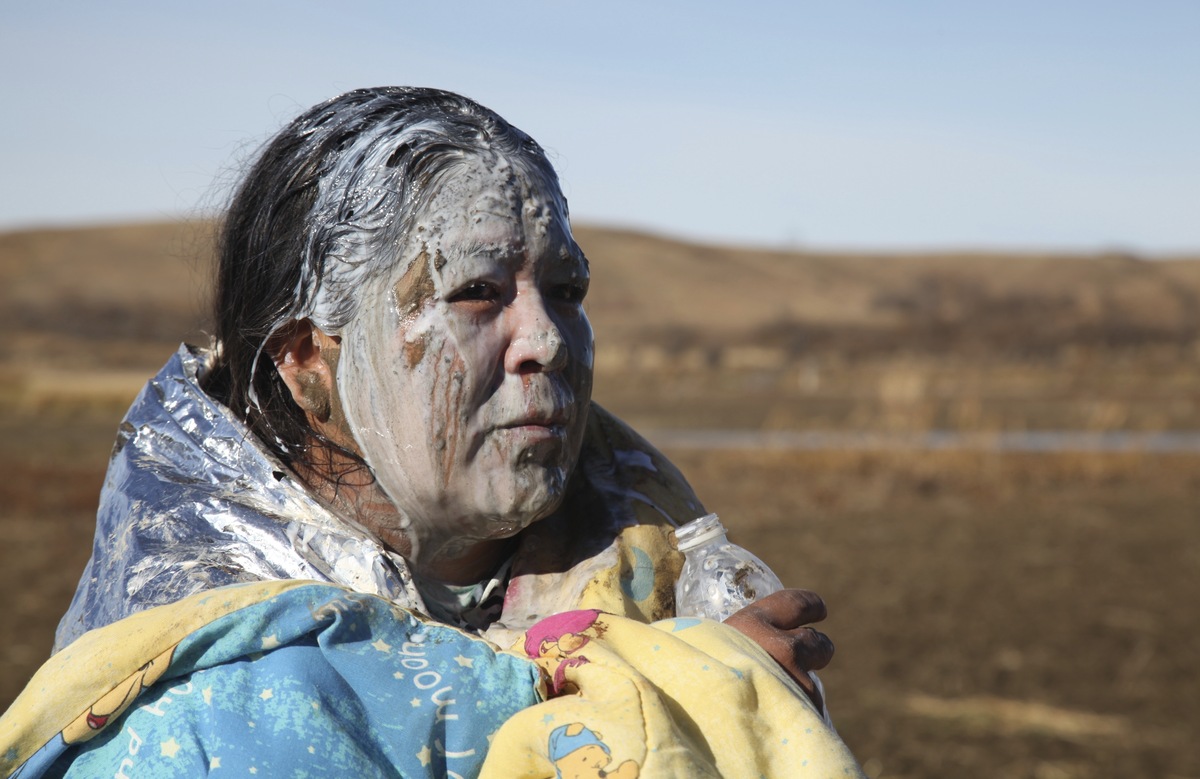 Tonya Stands recovers from being pepper sprayed by police after swimming across a creek with other protesters hoping to block construction of the Dakota Access Pipeline, near Cannon Ball, N.D., on November 2.

As resistance to the Dakota Access Pipeline in Standing Rock, N.D., concludes its seventh month, two narratives have emerged:

Both are true. The scope of the resistance at Standing Rock exceeds just about every protest in Native American history. But that history itself, of indigenous people fighting to protect not just their land, but the land, is centuries old.

Over the weekend, the situation at Standing Rock grew more contentious. On Sunday night, Morton County police sprayed the crowd of about 400 people with tear gas and water as temperatures dipped below freezing.

For Many Dakota Access Pipeline Protesters, The Fight Is Personal

For Many Dakota Access Pipeline Protesters, The Fight Is Personal

But the resistance, an offspring of history, continues.

Through the years, details of such protests change — sometimes the foe is the U.S. government; sometimes a large corporation; sometimes, as in the case of the pipeline, a combination of the two. Still, the broad strokes of each land infringement and each resistance stay essentially the same.

In that tradition, the tribes gathered at Standing Rock today are trying to stop a natural gas pipeline operator from bulldozing what they say are sacred sites to construct an 1,172-mile oil pipeline. The tribes also want to protect the Missouri River, the primary water source for the Standing Rock Reservation, from a potential pipeline leak. (Energy Transfer Partners, which is building the pipeline, says on its website that it emphasizes safety and that, "in many instances we exceed government safety standards to ensure a long-term, safe and reliable pipeline.")

Since April, when citizens of the Standing Rock Sioux Nation set up the Sacred Stone Camp, thousands of people have passed through and pledged support. Environmentalists and activist groups like Black Lives Matter and Code Pink have also stepped in as allies. Many people who have visited say that the camp is beyond anything they've ever experienced.

"It's historic, really. I don't think anything like this has ever happened in documented history," said Ruth Hopkins, a reporter from Indian Country Today. 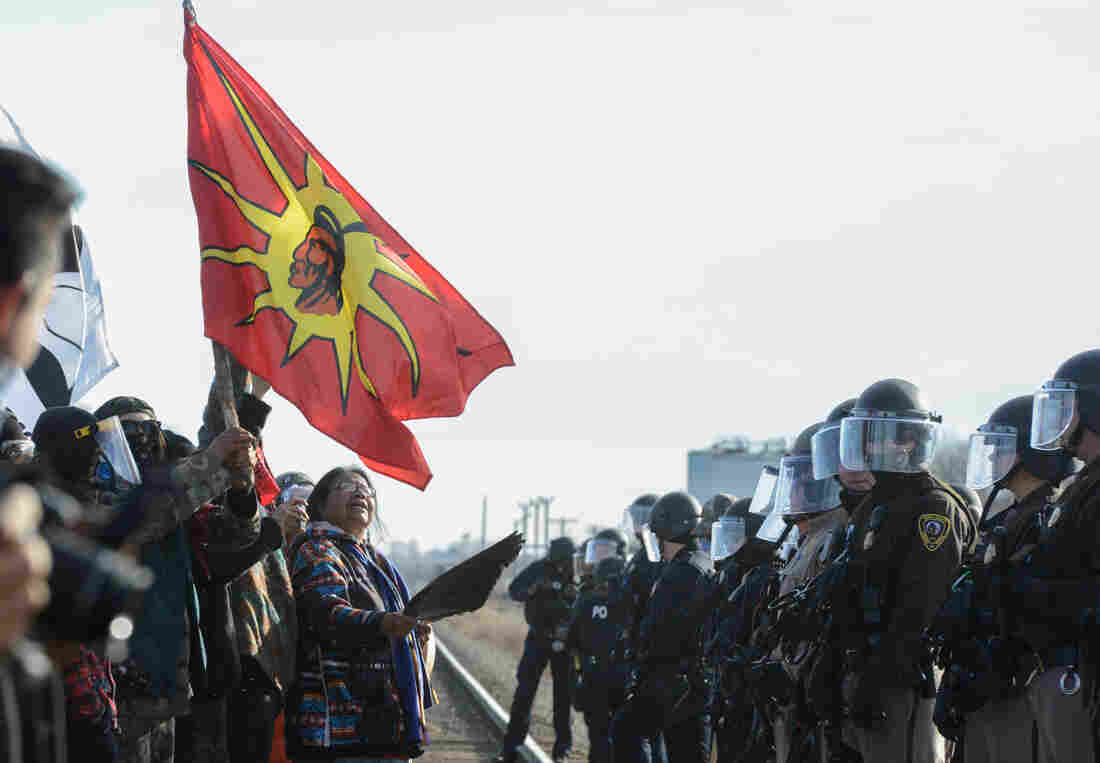 Protesters have a standoff with police during a demonstration against the Dakota Access pipeline near the Standing Rock Indian Reservation in Mandan, N.D., on Nov. 15. Stephanie Keith/Reuters hide caption 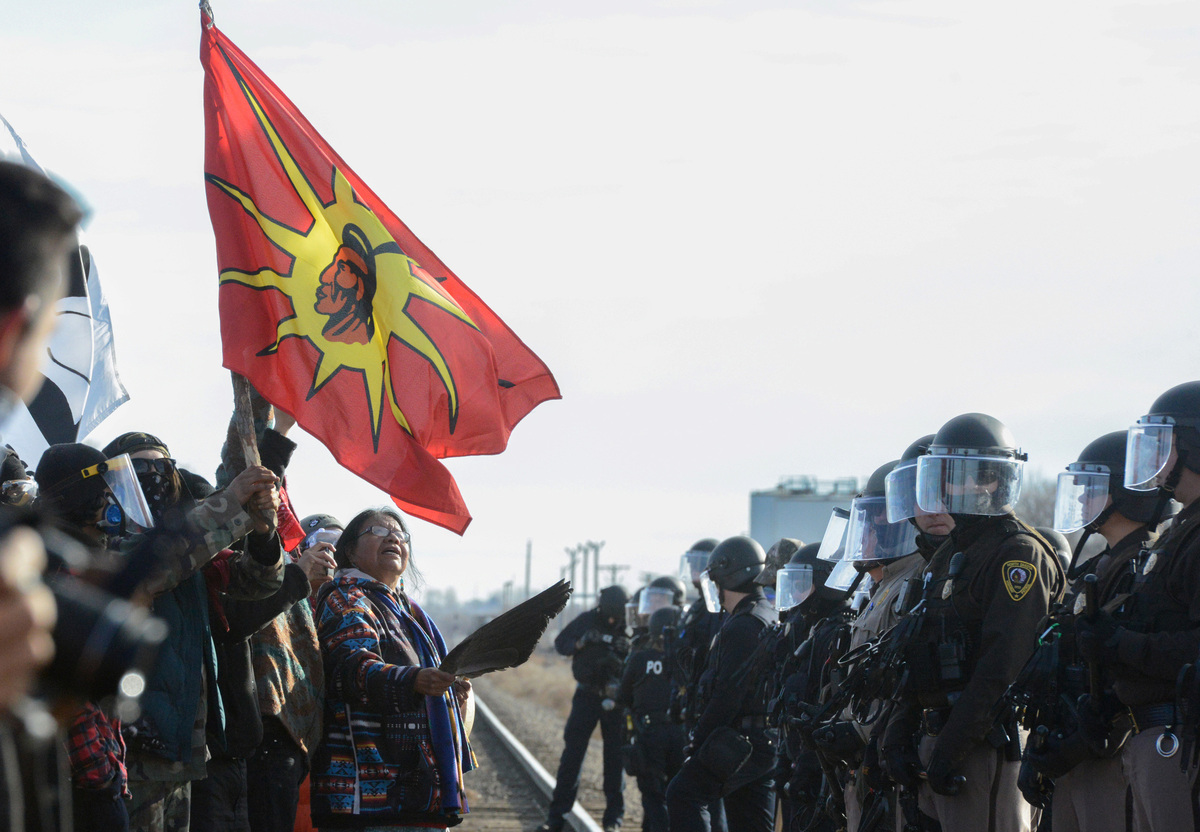 Protesters have a standoff with police during a demonstration against the Dakota Access pipeline near the Standing Rock Indian Reservation in Mandan, N.D., on Nov. 15.

But there are historical preludes, and you don't have to look too far back to find them. In 2015, when the Keystone XL pipeline was being debated, numerous Native American tribes and the Indigenous Environmental Network organized against it. The pipeline would have stretched 1,179 miles from Canada to the Gulf of Mexico. The Rosebud Sioux, a tribe in South Dakota, called the proposed pipeline an "act of war" and set up an encampment where the pipeline was to be constructed. Also joining in were the Environmental Protection Agency, the National Resources Defense Council, and the Omaha, Dene, Ho-chunk, and Creek Nations, whose lands the pipeline would have traversed.

President Obama vetoed Keystone XL. But even at the time, A. Gay Kingman, the executive director of the Great Plains Tribal Chairman's Association, warned that the reprieve would be temporary. "Wopila [thank you] to all our relatives who stood strong to oppose the KXL," Kingman said in a statement after the veto. "But keep the coalitions together, because there are more pipelines proposed, and we must protect our Mother Earth for our future generations."

In the case of the Dakota Access Pipeline, the Standing Rock Sioux have been able to attract support from hundreds of tribes all over the country, not just in places that would be directly affected. The tribes aren't just leaning on long-held beliefs about the importance of the natural world. They're also using long-held resistance strategies. Like the encampment itself.

"If you don't know very much about Native American people, you wouldn't understand that this is something that's kind of natural to us," said Hopkins, who is enrolled in the Sisseton Wahpeton Oyate Nation and was born on the Standing Rock Reservation. "When we have ceremonies, we do camps like this. It's something that we've always known how to do, going back to pre-colonial times."

In the late 1800s more than 10,000 members of the Lakota Sioux, Cheyenne and Arapaho tribes set up camp to resist the U.S. Army's attempt to displace them in search of gold. That camp took form at the Little Bighorn River in Montana. After the soldiers attacked the camp in June of 1876, the Battle of the Little Bighorn, widely known as (Gen. George) Custer's Last Stand, erupted. In defeating the Army, the tribes won a huge land rights victory for Native Americans. 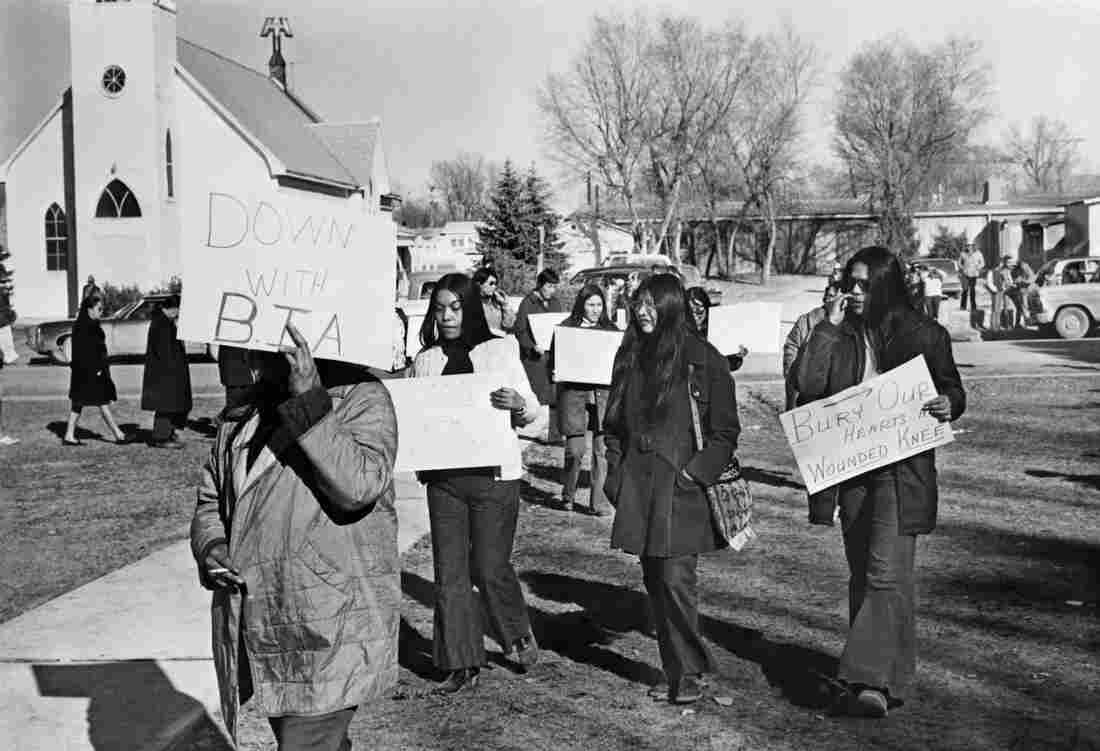 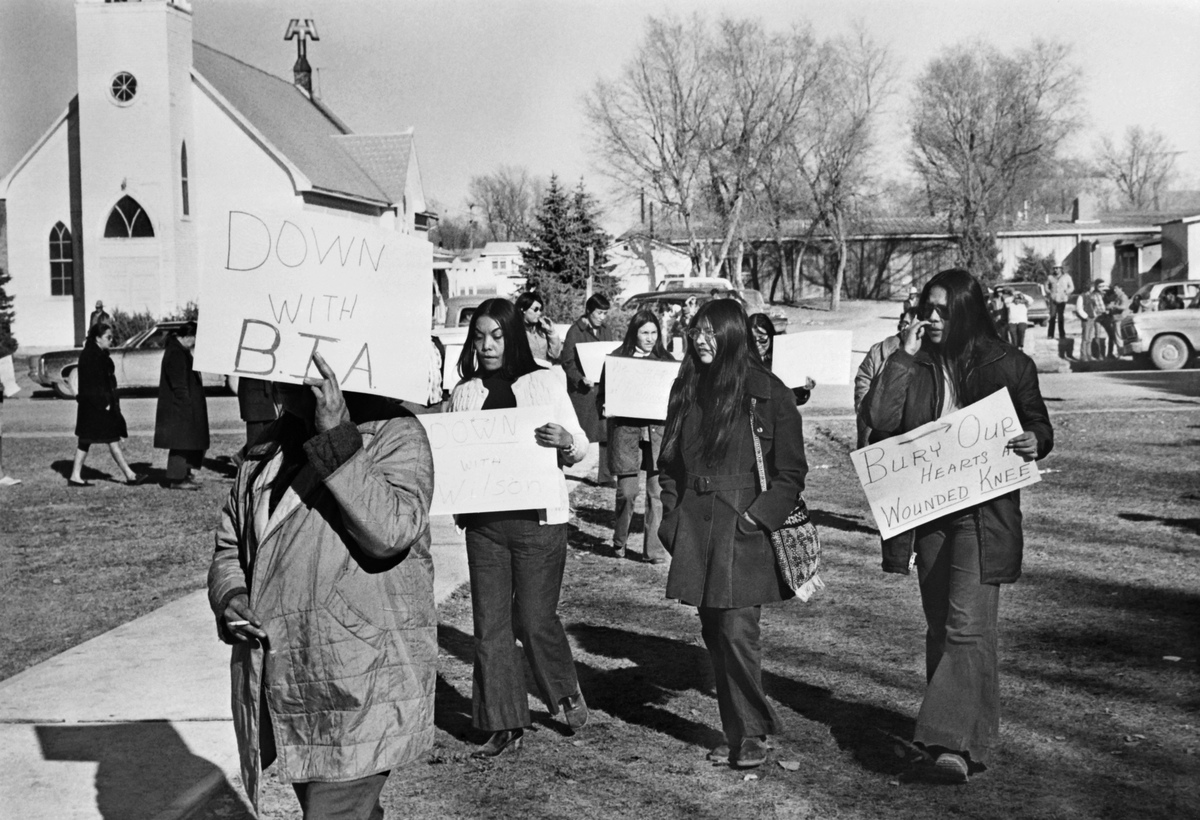 Native American women demonstrate in 1973 on the Pine Ridge Indian Reservation in South Dakota, where roughly 200 American Indians occupied the town of Wounded Knee for the rights of indigenous people.

There was also Wounded Knee, a protest that was part of the American Indian Movement. During the 1973 demonstration, about 200 people occupied the town of Wounded Knee on the Pine Ridge Reservation in South Dakota — the site of an 1890 massacre in which U.S. soldiers killed hundreds of Native Americans. Protesters turned Wounded Knee into what one former AIM leader called "an armed camp" in order to protest corruption in tribal leadership and draw attention to the U.S. government's failure to honor treaties.

Over the course of the 1973 occupation, two Sioux men were killed and hundreds more arrested. But the resistance, which lasted 71 days, underscored Native American civil rights issues in a way that many see reflected today in Standing Rock.

"There are no rights being violated here that haven't been violated before." said Kim Tallbear, a professor of Native Studies at the University of Alberta, who for years worked on tribal issues as an environmental planner for the U.S. Environmental Protection Agency and the Department of Energy. Those violations, she said, have taken two forms: long-term disregard for indigenous land rights and a "bureaucratic disregard for consultation with indigenous people."

When she sees images of police using pepper spray and water cannons or security guards unleashing dogs on Standing Rock protesters, Tallbear said, she isn't shocked. "I'm, like, oh yeah, they did that in the 19th century, they did that in the 16th century," she said. "This is not new. ... The contemporary tactics used against indigenous people might look a little bit more complex or savvy, but to me, I can read it all as part of a longstanding colonial project."

"Maybe for non-Natives who thought that the West was won, and the Indian Wars were over, and Native people were mostly dead and gone and isn't that too bad – now, they're like, 'Oh wait a minute, they're still there? And they're still fighting the same things they were 150 years ago?'