Accessibility links
After Election, Diversity Trainers Face A New Version Of 'Us Versus Them' : Code Switch Through the eyes of those who work to make companies "inclusive," the 2016 election suggests two things: Business will pick up, but it won't be business as usual.

After Election, Diversity Trainers Face A New Version Of 'Us Versus Them'

After Election, Diversity Trainers Face A New Version Of 'Us Versus Them' 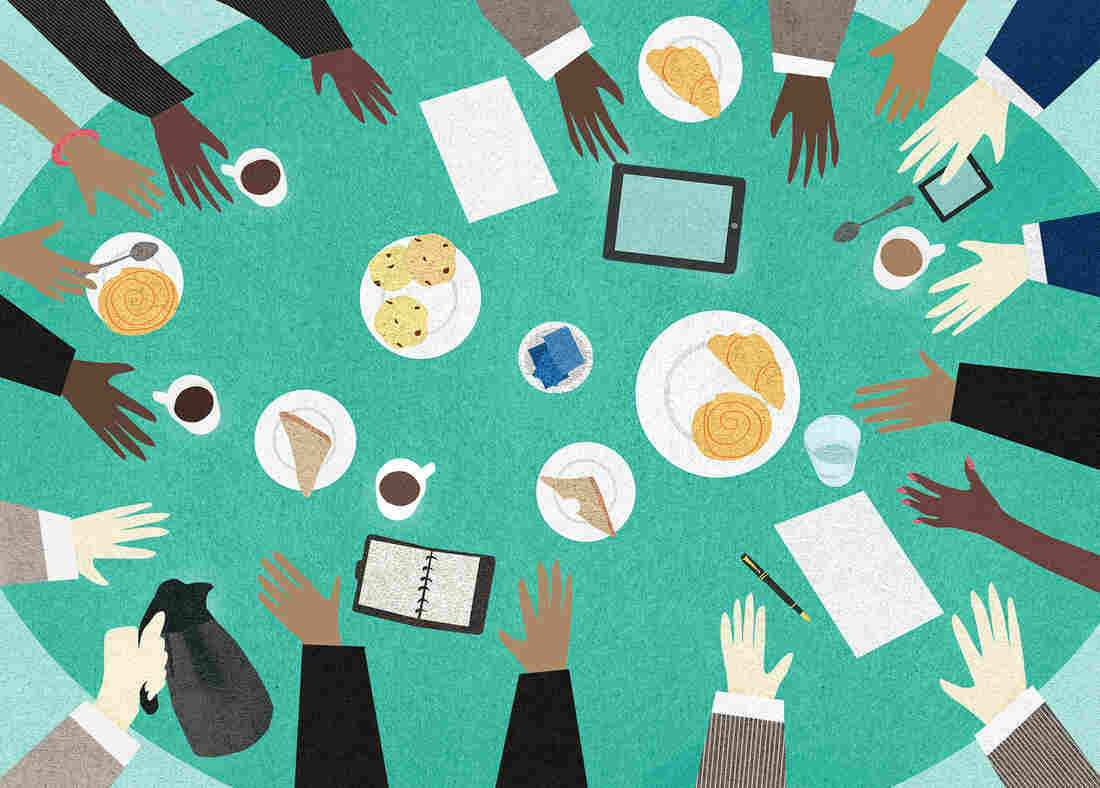 After the election, professional peacemakers may feel they have to work harder to tamp down heightened feelings of "us versus them" in the workplace. Marcus Butt/Ikon Images/Getty Images hide caption 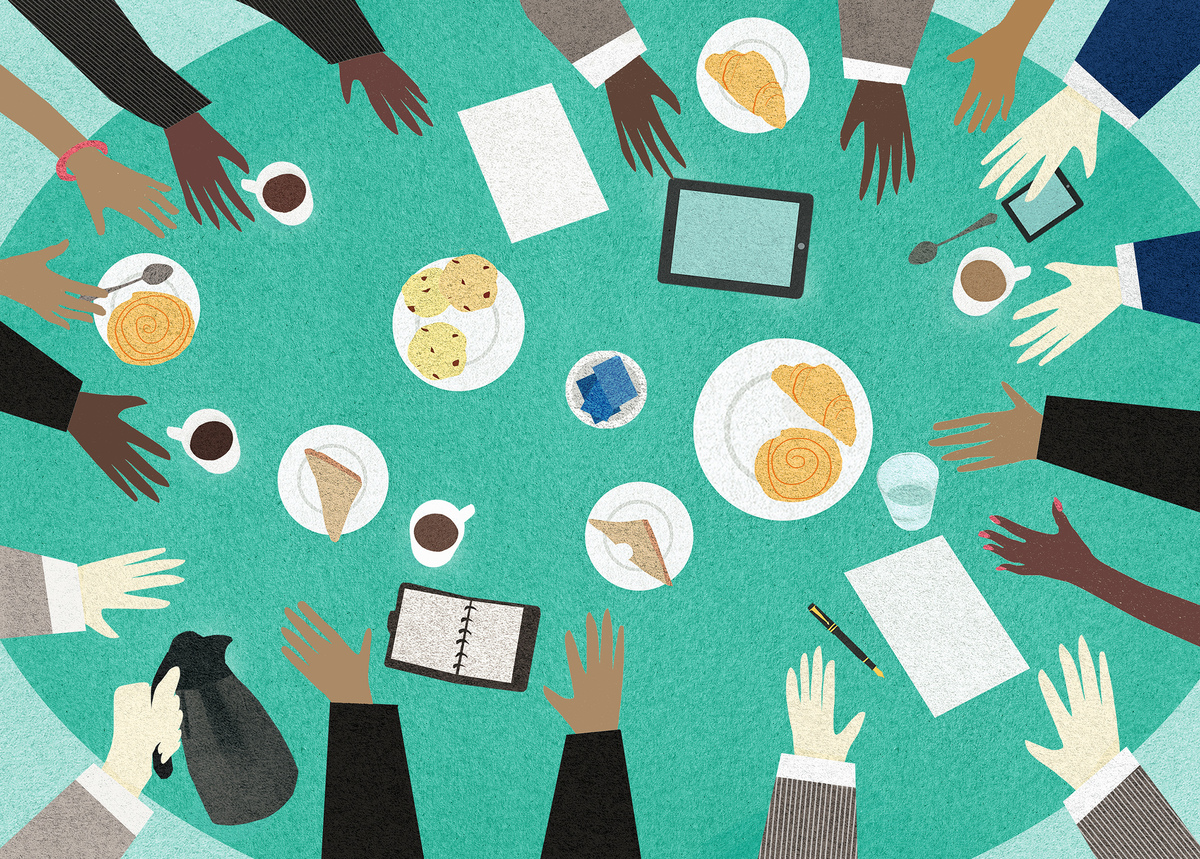 After the election, professional peacemakers may feel they have to work harder to tamp down heightened feelings of "us versus them" in the workplace.

On election night, as it became clear that Donald Trump would be the country's next president, Dorcas Lind was feeling unsettled. With her children tucked in bed, Lind watched as the results trickled in and battleground states like Pennsylvania, Florida and North Carolina turned red on the TV map. She thought about work.

Maybe, she thought, this would be good for business. Or, maybe, it was time for a career change.

Lind is a diversity consultant in the health care industry. It's her job to go into companies and help them create inclusive environments for their employees.

For consultants like Lind, the election's polarizing nature, which especially divided the nation on issues of race, is two-fold. While it means some of their business will almost certainly boom, a new set of challenges emerges for the professional peacemakers. Now, they say, they have to work harder to tamp down heightened feelings of us versus them; they have to hear the concerns of people usually thought of as privileged; and they have to navigate a language minefield where the wrong word can ignite conflict.

Studying the maps of how people voted, Lind was disturbed by the stretch of red in her district, a New Jersey suburb, which she said had once been celebrated for its diversity. Like many others in the business, Lind equated a vote for Trump with a vote for intolerance.

"I thought that my whole career had blown up in front of me," said Lind, who has worked in the field for more than two decades and is founder and president of Diversity Health Communications. "I felt so absolutely overwhelmed with the depth of how much work had to be done. And on the other hand, I felt like I didn't even want to do the work. ... Given the results and how the map looked, I felt my work would be futile."

It's those who voted for Trump or support Trump — and everyone else. And that's a really difficult dichotomy to address.

It might feel futile, but many consultants said they expect to see an uptick in calls in the months ahead. That makes sense: The corporate world is a microcosm of the larger world. People who voted for Trump work at the same companies as those who voted for Hillary Clinton or other candidates. And with a contentious postelection environment, employees will inevitably clash over matters of race. Reports will be filed with human resources. Management will be notified. And company leaders will have to figure out how to deal with it all.

"There's a whole toolkit of language we need to create [in order] to talk about this polarization," Lind said. "It's those who voted for Trump or support Trump — and everyone else. And that's a really difficult dichotomy to address."

Luby Ismail is the head of Connecting Cultures, a diversity consulting business in the Washington, D.C., area. She said one of her biggest tasks is to break down any feelings that people are on warring sides. Ismail, who's an Egyptian-American Muslim, has worked with companies including The Walt Disney Co., Nike Inc. and Sodexo to lead sessions that help employees better understand Arab-Americans and American Muslims.

A Washington Transition For Trump, And For The Rest Of Us

"The workplace is very tricky," Ismail said, "because what do we say if you want to remain friends with people? 'Then don't talk about politics and religion.' And yet, people are needing to talk about it. So if only we had some way to bring civility with caution, and for people to feel that instead of doing an us versus them, a right versus wrong, it's, you know, 'Help me understand why you believe something.' "

The Department of Justice uses one of Ismail's training videos on identifying anti-Muslim bias as part of its cultural competence curriculum. She's updating the DOJ training now, but she said she's not sure what will come of it after Inauguration Day.

That "us-versus-them" sentiment Ismail mentioned is particularly tough to manage now. Doug Harris heads The Kaleidoscope Group, a diversity company in Chicago. He said that he has to help people of color deal with "historical garbage" — he means racism — while also helping white people who, he learned during this campaign, feel strongly that they're "out of the power base."

"I think right now there's a temperament within society of exclusion on both sides of the table," Harris said. "And those who may have been seen to have been historically included are feeling just as excluded as everyone else. It's always a fight today in some ways [over] who's most excluded. Historically, it might have been about women, people of color, gay and lesbian. There's another group that's more powerful called — uh, I don't know the right name of it, but white males — who feel they haven't been given their fair shake. And so how do we make sure their viewpoint is heard?"

Usually, Harris uses an exercise he calls "insiders and outsiders" to get people to self-reflect. In this exercise, employees list who might feel like outsiders in the company. Maybe it's new workers or people at lower levels or people who have English as a second language or introverts, Harris said. Inevitably, the list turns to women and people of color.

"So we look at the list. If you're not part of the list, that means you're probably one of the ones causing the exclusion," Harris said.

White people as a group, and particularly men, don't typically make that list. But the presidential campaign, Harris said, unearthed the strong sentiment among white people that "they don't feel like the lead group that's been privileged, and if you look at their lives, they're not."

Those who do diversity, he said, have a responsibility to address everyone's concerns. "It's not about a special effort toward white men," he said. "That's not the effort I'm talking about. It's more-so that ... if you honor everybody's challenges, they're more likely to own their privileges."

Lind adds an amendment to that thought, one that underscores the tension diversity consultants, like the rest of the country, are tasked with resolving. Longstanding racial discord, fueled by the "historical garbage" Harris mentioned, collides with the idea of honoring everybody's challenges when some of those challenges spring from racial ignorance and racism. Thinking of all challenges as equal, she said, is a problem.

"I think the backlash we're seeing is people who work in the diversity space — and also civil rights folks in general — are saying, 'We are not going to be inclusive of ideas and values that are explicitly detrimental and harmful,' " Lind said. "Because the rhetoric is, 'One side has lost, one side has won, and everybody needs to get together and move forward for all Americans in the country.' "

Walking that line of competing interests is made even tougher by the language of diversity, including the word diversity itself. Leah P. Hollis, president of Patricia Berkly LLC in Philadelphia, said she actively avoids language that might be polarizing so she can keep everyone in the conversation. After all, in a swing state like Pennsylvania, where nearly 6 million people voted and Trump won by fewer than 70,000 votes, she has to assume that half of the employees she'll be working with voted for Trump, half for Clinton. So figuring out what tone to strike is important.

Walking that line of competing interests is made even tougher by the language of diversity, including the word diversity itself.

Even the phrase "diversity consultant" can be divisive to some. Hollis said she has to frame her focus as "workplace bullying," because many folks seem unable to admit there's a diversity problem. Her workaround, she said, is this: "Everyone is caught in a power differential, so a lot of my training has a lot to do with workplace bullying and how it disproportionately affects those from different backgrounds."

Hollis said the minute she uses words like "diversity," she loses the room. People who believe that others are too "politically correct" won't continue to play ball, she said. "If I glom onto or attach those trigger phrases, it's over," she said.

"My training is about who you are. I don't know where you're from. You may be from Middle America. You may root for the Jacksonville Jaguars. You might love barbecue. I'm a black woman from Western Pennsylvania. I grew up eating pierogies. I grew up on the Rust Belt. ... In the trainings I have, it's not about whether I'm PC or not. It's about how people feel different. I try to peel back the layers of the labels."

Looking ahead, the consultants said that now, more than ever, they'll have to take a harder look at their own practices, both in terms of how they'll frame training and how they'll choose clients.

Ismail said it's not enough to be an ally to groups that are feeling attacked. Be an accomplice, she said: Defend and speak up.

"You're at lunch or dinner or on a break and someone makes a disparaging joke about anyone, let's say Muslims or Jews or being gay; don't let it pass," she said. "I need you to pause that statement ... Maybe you have to say, 'That's unacceptable here, I don't appreciate that here.' ... That's one way to be an accomplice."

Postelection, Lind is thinking about the best way to be effective, and it has something to do with where she'll do the work. She said she doesn't want to consult with a company that normalizes intolerance or discrimination or tries to brush them under the rug. She said she wants to work for a company where leadership has already made a demonstrable commitment to diversity.

She pointed to the number of CEOs who have doubled down on their corporate mission statements since the election. Leaders of PepsiCo, General Electric, Apple, Medtronic and others have reiterated their support for diversity and inclusion. Medtronic CEO Omar Ishrak, in an email to the medical device-maker's employees, took a stand that would surely be heartening to those who do the work of diversity. He called the company's principles around inclusion "an irrevocable priority."