Accessibility links
For Tattoo Artists, Race Is In The Mix When Ink Meets Skin : Code Switch Skin tone is only part of the challenge for an oft-tattooed customer who wants to see herself reflected in the "human canvases" of tattoo artists. 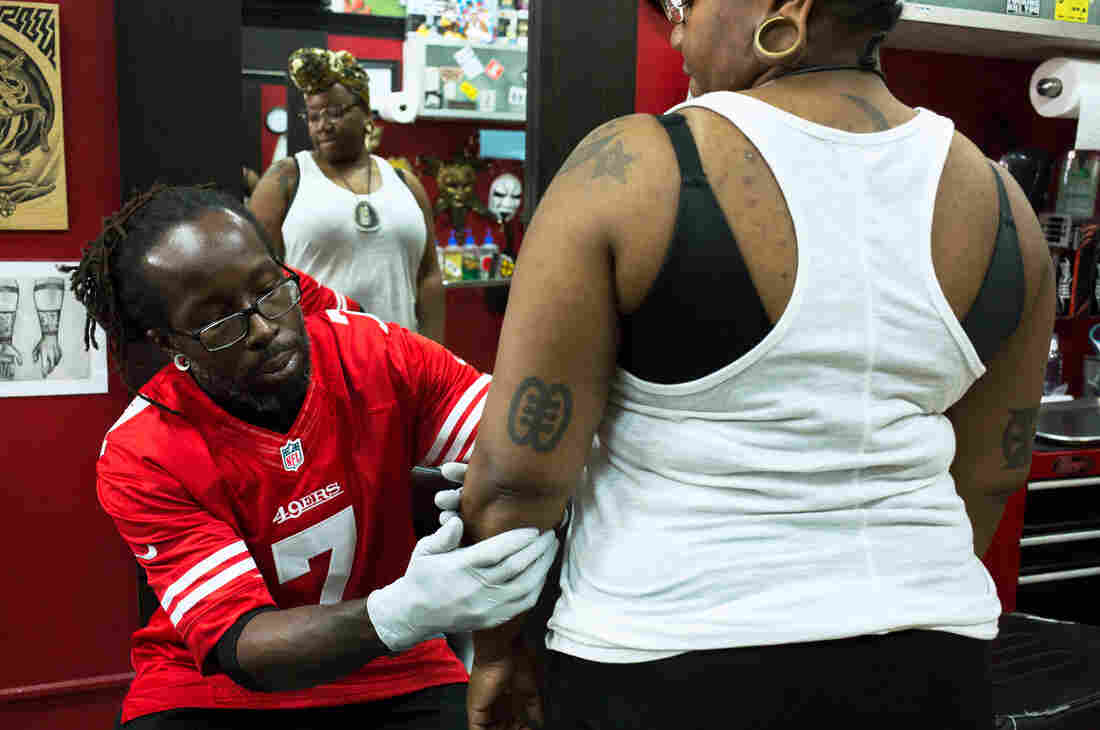 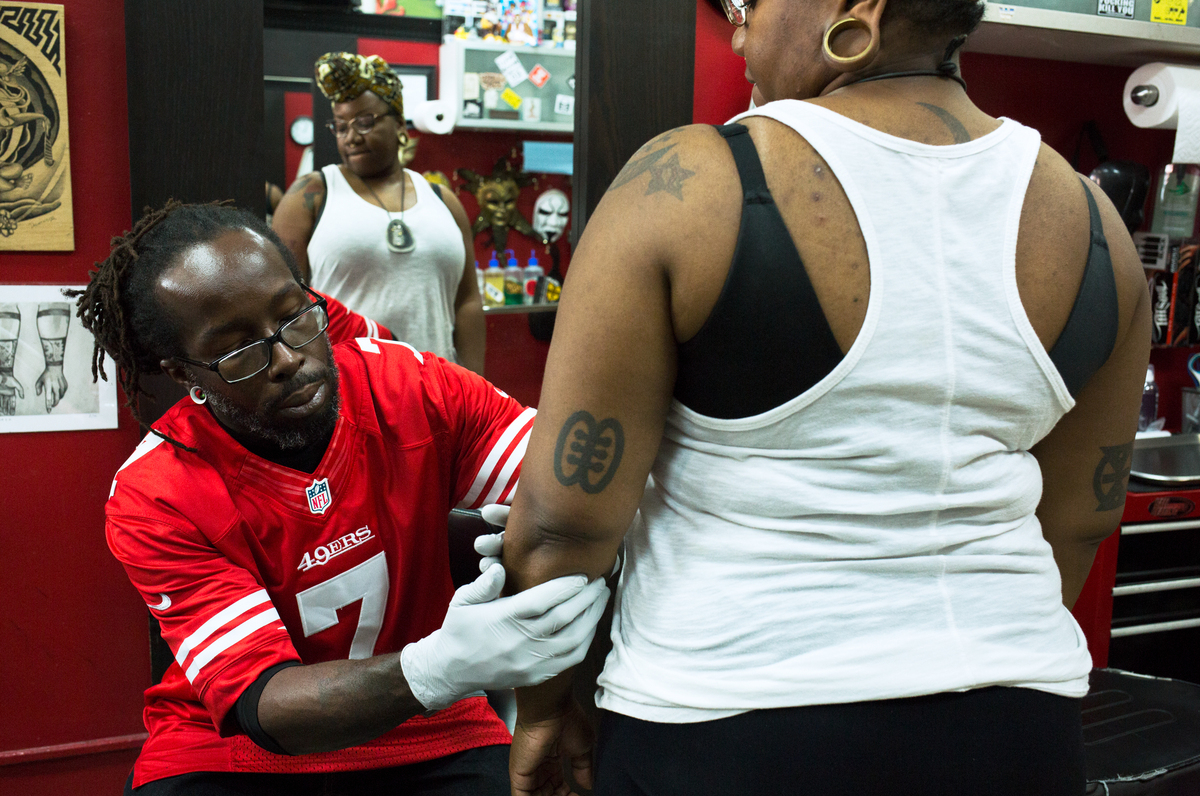 Oshun Afrique is getting her 35th tattoo.

She has come to the Pinz-N-Needlez tattoo shop in Washington, D.C., where practically every inch of wall space is covered in artwork. While Afrique lounges on the sofa at the front of the small, quaint shop, owner Christopher Mensah sits at his desk and sketches her tattoo design.

Afrique came to the store after seeing Mensah's work in her Facebook news feed. She and Mensah both agree that anyone looking to get tattooed should scour online portfolios to find the right artist.

But in addition to considering the artistry, Afrique has one other requirement: She won't get work done by artists who have no black people featured in their portfolios. She wants to see people with skin the color of hers, a deep, reddish brown.

Finding artists with darker skin tones in their portfolio can be difficult. To make the point, Afrique takes out her iPhone and opens up Instagram, scrolling through profiles of tattoo artists. She stops at the account of Caitlin Thomas, who has 150,000 followers.

"Going to her Instagram, her work is really good," Afrique says. "But I would never get anything done because no one looks like me."

None of the tattoos featured on Thomas' Instagram are on brown skin. Showing only white skin in a portfolio sends the wrong message about beauty, Afrique said.

"I feel like it kind of feeds into an underlying desire that society has put on you to have lighter skin," she said.

On the reality television show Ink Master, a program similar to America's Next Top Model, tattoo artists compete for the chance to win $100,000. Many of the tattoos completed by contestants are featured on the show's Instagram. Out of the hundreds of tattoos posted, there isn't a single piece on black skin. 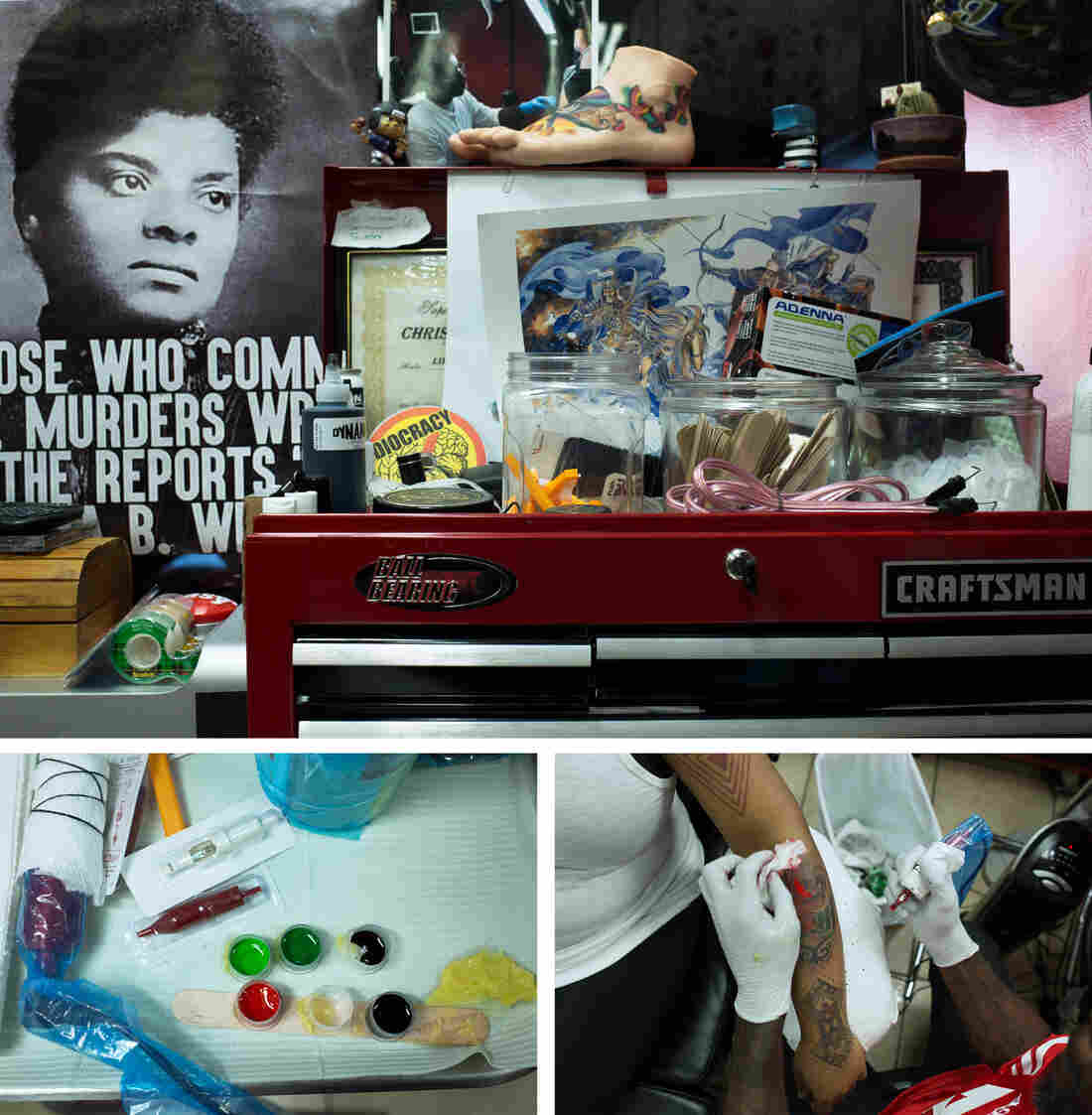 (Top) Mensah encourages the artists in his shop to decorate their workspaces with things they like. (Left) He lays out colors and tools at his station before starting Afrique's tattoo (right). Raquel Zaldivar/NPR hide caption 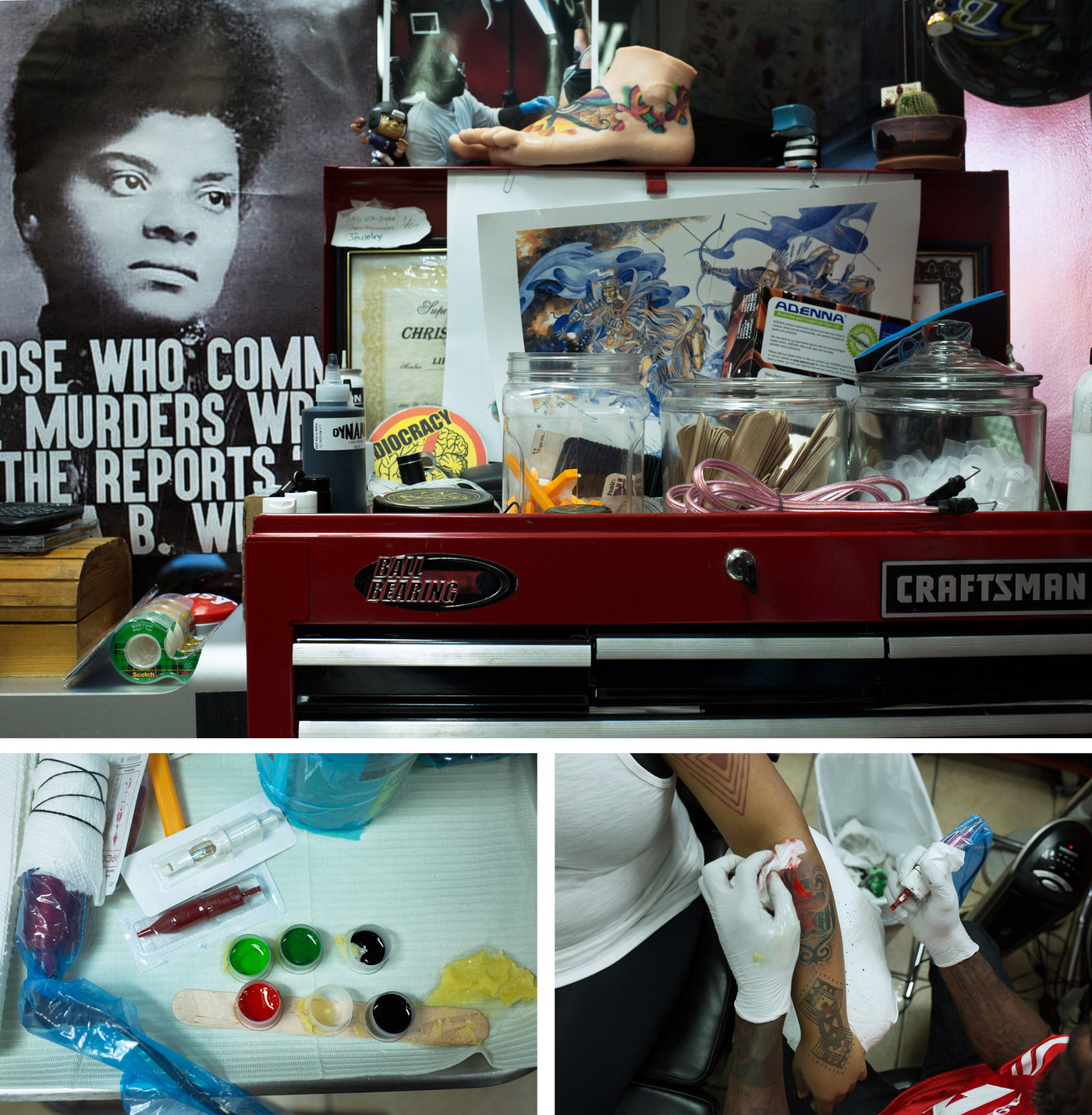 (Top) Mensah encourages the artists in his shop to decorate their workspaces with things they like. (Left) He lays out colors and tools at his station before starting Afrique's tattoo (right).

The people who get tattooed by the show's contestants are called "human canvases." The winner of Season 2, Steve Tefft, expressed frustration in Episode 12 when presented with dark-skinned black men as potential canvases.

"I don't want the dark canvases," Tefft said. "They take away half your skill sets."

Tyler Brewer, a tattoo artist at Kensington Tattoo in Maryland, said the majority of pieces he has seen featured in popular portfolios are done on white skin.

"Some people may assume that's the case because you can't do the same quality of work on darker skin," he said. "I don't believe that to be the case."

Brewer said he "wouldn't be able to take on something extremely bright and vibrant that I could on a white man on a black man. But that doesn't mean you can't do color on dark skin."

"While I definitely do tattoo people of darker colour, it is not my responsibility to show diversity through my page," Thomas wrote in an email. "The pieces I choose to share are not intended for popularity but rather to showcase technique and clean line work."

Thomas edits her photos to make the skin lighter. She said it's "not a matter of race exclusion," but part of a branding strategy to feature tattoos on a consistent skin tone. 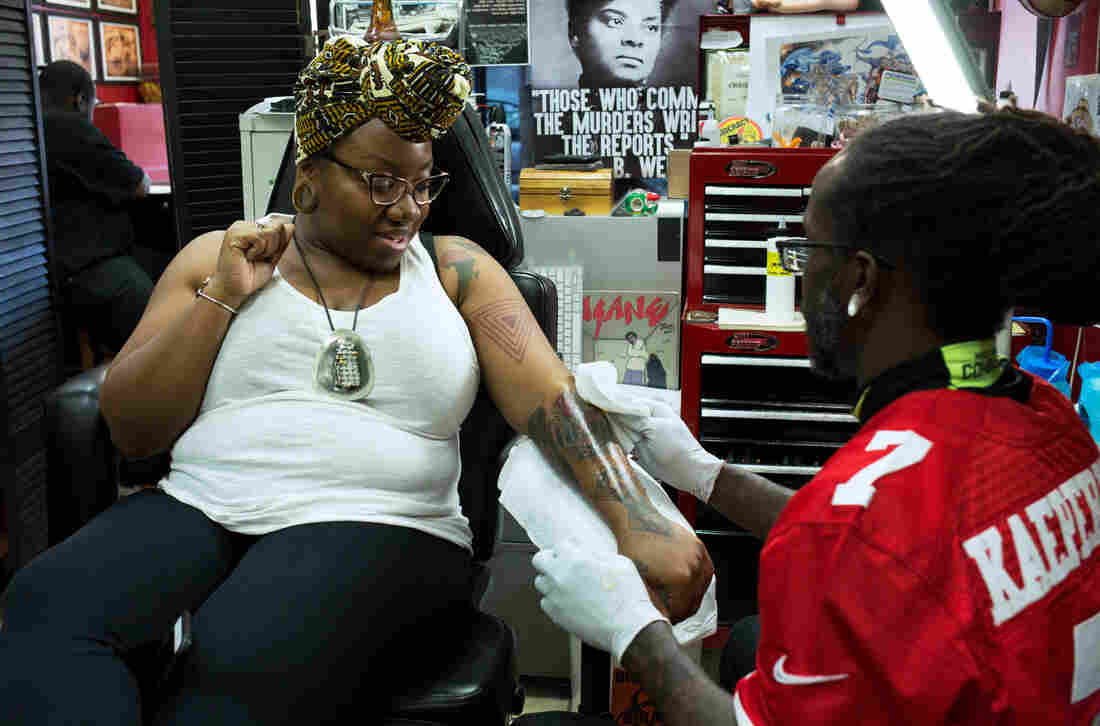 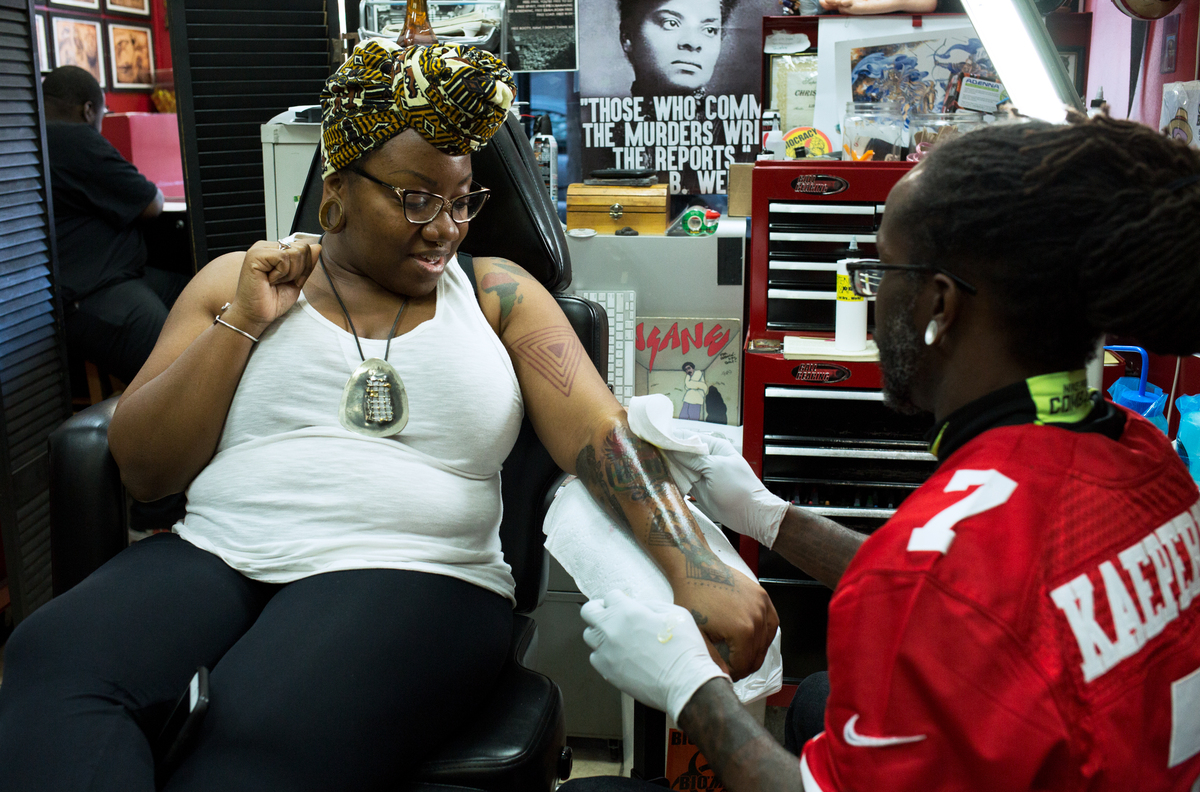 After about an hour, Mensah reveals Afrique's newest tattoo.

Afrique chose Mensah for her 35th tattoo because she felt represented in his portfolio. He said it's important to take a client's skin tone into account when designing a tattoo. For dark skin, he said, the design needs to be bigger and bolder than it would have to be on lighter skin.

"Let's say somebody came in and they wanted to get a heart and an initial in it the size of a dime," he said. "Something dime-sized you may do on white skin; you may have to do a quarter or half-dollar size on dark skin."

He said tattooing darker skin requires skills some artists are unwilling to learn. For example, dark skin, when injured, can sometimes form raised scars called keloids, he said, and that requires greater care with the needle.

"The times I was working at white tattoo shops, what I would hear a lot was 'dark skin is more difficult to tattoo,' " Mensah said. "However, from my experience, I think it's softer."

As the community of people of color working in professional tattoo shops grows, Mensah said, there will be more artists who are skilled at tattooing darker skin. The community has grown considerably since Mensah started tattooing 20 years ago.

"At that time there weren't many ... well, I didn't see any black tattoo artists," he said.

Most of Afrique's tattoos have been done by people of color. Her left arm is covered in African symbols. She's a hair stylist who considers her work art, and she says tattoos are her favorite type of accessory.

"You can walk around with the art that you love," she said. 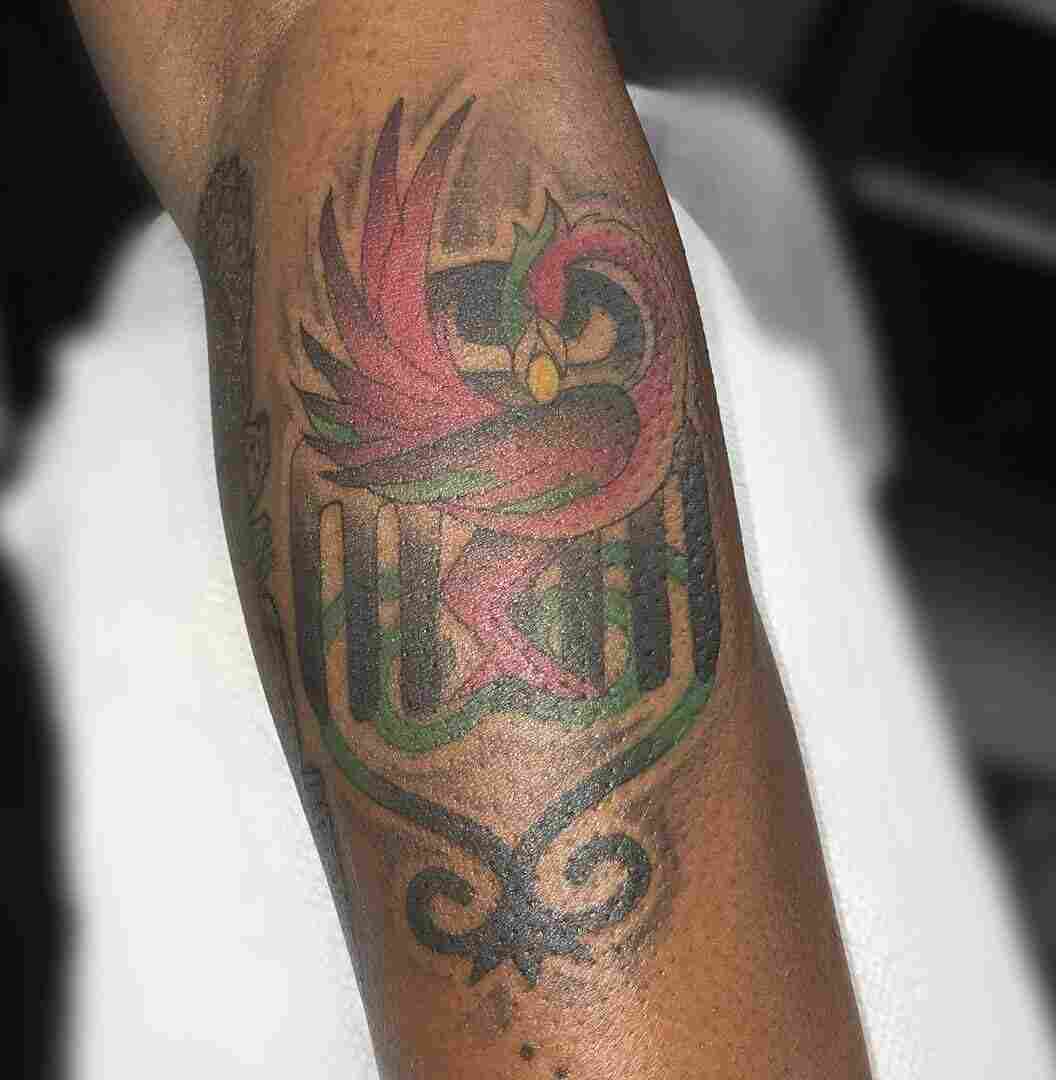 At Pinz-N-Needlez, she approves Mensah's design, and he brings her over to his tattooing station. Having gone under the needle 34 times before, Afrique is as relaxed in the tattoo chair as she was sitting on the sofa.

After an hour in the hot seat she has a new accessory. It's a sankofa bird, a West African symbol that represents the act of reclaiming one's African heritage. Sankofa translates to "go back and get it."

Before Mensah bandages the tattoo, Afrique pulls out her iPhone and snaps a picture of her forearm.

"I'm so excited to show it off," she says. "I'm not putting my jacket on. I'm gonna walk around the city in a tank top in November."