Accessibility links
'Politically Correct': The Phrase Has Gone From Wisdom To Weapon : Code Switch Through the decades, "politically correct" has been regarded as shield and club, as cowardly and courageous. But it has meant one thing above all: confusion. 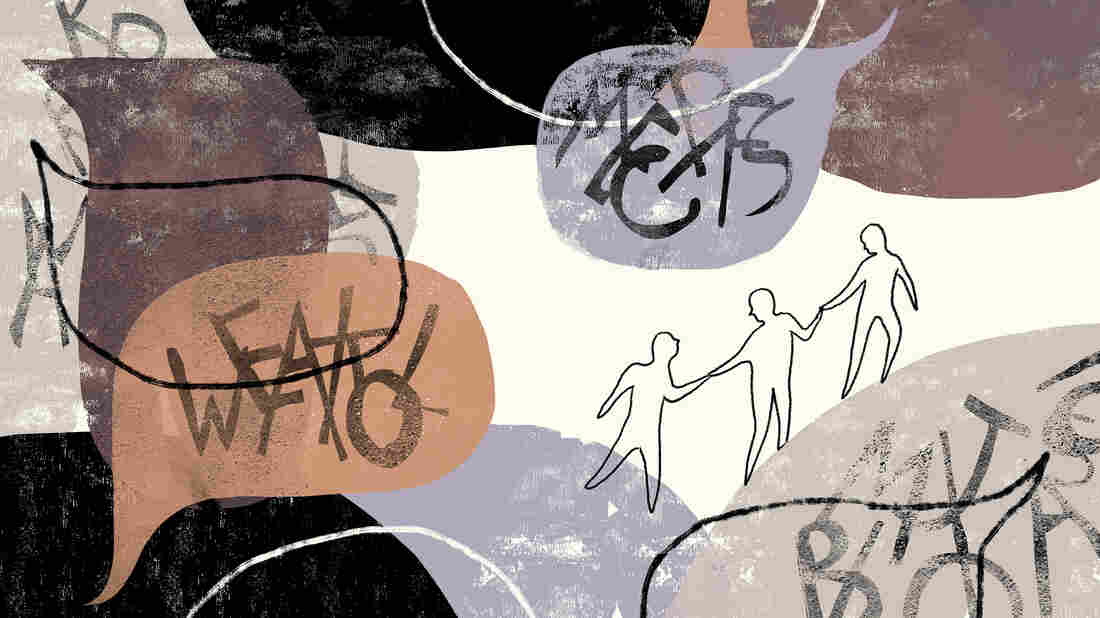 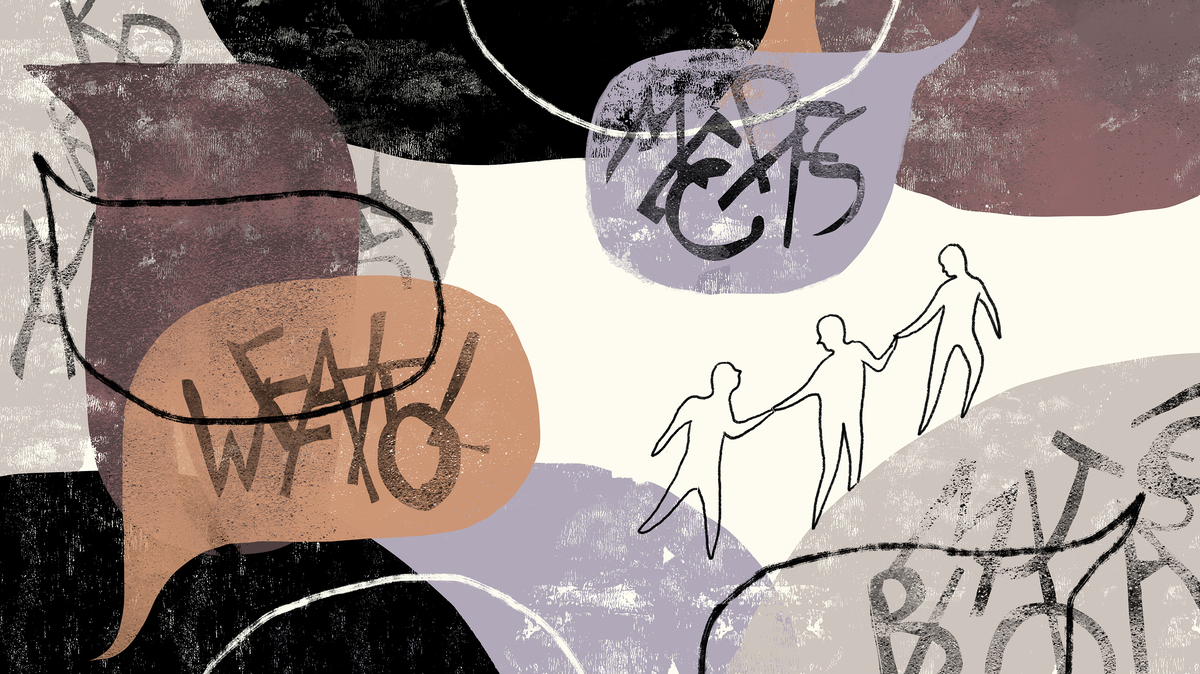 Rewind to August 2015: Then-candidate Donald Trump is on stage in Cleveland at the first Republican presidential debate.

"I think the big problem this country has is being politically correct," Trump tells the moderator, Fox News' Megyn Kelly. "I've been challenged by so many people and I don't, frankly, have time for total political correctness. And to be honest with you, this country doesn't have time, either."

Now president-elect, Trump has denounced "political correctness" many, many, times since his campaign began. At a rally a year ago in South Carolina, he called for a "total and complete shutdown of Muslims entering the United States." He told a cheering crowd that his statement on the subject was "very, very salient, very important and probably not politically correct."

Politically correct. Political correctness. Using the biggest bully pulpit there is, Trump has wielded the phrase and its variants like a club some days and a shield on others. And he's hardly alone.

Since as far back as 1793, when the term appeared in a U.S. Supreme Court decision about the boundaries of federal jurisdiction, "politically correct" has had an array of definitions. It has been used to describe what is politically wise, and it has been employed as ironic self-mockery. The phrase has driven contentious debates in which free speech and free choice are pitted against civility and inclusion. But it hasn't just changed meaning, it has changed targets. What the November election has made clear is that these words, especially when they're related to matters of multiculturalism and diversity, carry consequences.

Fairleigh Dickinson University and the Pew Research Center released two polls in the past year, each finding that, like Trump, a majority of Americans thought people were too easily offended and that "political correctness" was one of the country's biggest problems. But what exactly is it?

People of all political stripes have used the phrase with varying, even contradictory meanings. In 1964, President Lyndon B. Johnson used it to simply describe the correct (and incorrect) way to do politics when he said that he would enact policies "not because they are politically correct, but because they are right." Washington Post reporter Caitlin Gibson cited the quote in a January story headlined, "How 'politically correct' went from compliment to insult." In academic debates this year, people have used the words to dismiss the validity of those who advocate for "safe spaces" on college campuses and trigger warnings in classrooms.

The author Lionel Shriver riled up literary circles this fall with a controversial speech at the Brisbane Writers Festival. Some called her intolerant and out of touch. Then others accused Shriver's critics of being too politically correct, another way of saying "hypersensitive."

Comedian Bill Maher, whose aptly named TV show Politically Incorrect ran for nearly a decade, regularly skewers American politics and assails "political correctness" with commentary and satire on Real Time with Bill Maher, his HBO talk show. In a contentious piece for the Hollywood Reporter in February in which he announced his support for Sen. Bernie Sanders, Maher said Americans "have been choking on political correctness and overly careful politicians for the last generation or two and are sick of it." In that essay, Maher used the phrase as a synonym for cultural cowardice.

So, to review: "Politically correct" means politically wise or invalid or hypersensitive or cowardice.

Ruth Perry, a professor of literature at MIT, has written about the moment she thinks the phrase took a turn toward its most common contemporary usage: a rebuttal to the ideals or practice of diversity. That history, she says, starts in the 1960s, when Black Power advocates, along with what she called the New Left movement, used "politically incorrect" to mean people were out of step with the movement's orthodoxy. Perry, who founded MIT's women's studies program, wrote a widely cited 1992 essay in The Women's Review of Books to make the case that the phrase had been co-opted by political conservatives.

At the time, people were battling over language that seemed to serve as proxy for deeper disagreements about how Americans should handle ideas of equality and equity. Mixed in with debates about whether or not "manhole cover" should include the word "man," were more divisive arguments about whether things like affirmative action and multiculturalism were destroying liberal education.

In her essay, Perry talked about the countless times she had come across articles, op-eds and books that used the phrase "politically correct" to assail people like her. It was a phrase she and her friends, all civil rights activists, used all the time, but not the way it was being used in her readings.

"The attack on the 'politically correct,' " Perry wrote, "in the universities is an attack on the theory and practice of affirmative action—a legacy of the sixties and seventies—defined as the recruitment to an institution of students and faculty who do not conform to what has always constituted the population of academic institutions: usually white, middle-class, straight, male."

The emerging definition was "confusing to us, me and my buddies," Perry said in a recent interview. "It was our shorthand, and it was always used ironically. It was always used as a joke. It was, I think, one of the ways we distinguished ourselves as the New Left from the Old Left. It was about not being dogmatic. So that you would say, 'I know it's not politically correct, but I'm going to go get a hamburger anyway,' or, 'I know it's not politically correct, but I shave my legs.' "

But the meaning had already started to shift to the right.

In 1987, conservative philosopher Allan Bloom wrote the book The Closing of the American Mind, which a New York Times writer described as having "wildfire success." In the book, he railed against the so-called "open minds" in academia that he said had instead offered students narrow, liberal perspectives. To make his case, he pointed to the Black Power movement:

"The Black Power movement that supplanted the older civil rights movement—leaving aside both its excesses and its very understandable emphasis on self-respect and refusal to beg for acceptance—had at its core the view that the Constitutional tradition was always corrupt and was constructed as a defense of slavery. Its demand was for black identity, not universal rights. ....

"The upshot of all this for the education of young Americans is that they know much less about American history and those who were held to be its heroes. This was one of the few things that they used to come to college with that had something to do with their lives. Nothing has taken its place except a smattering of facts learned about other nations or cultures and a few social science formulas."

Bloom, who died in 1992, is cited regularly by conservative academics and writers. While he didn't use the phrase "political correctness," his writing stoked the view that people were overly concerned with multiculturalism and diversity at the expense of rigorous education and free thinking.

In a 1991 commencement speech at the University of Michigan, then-president George H.W. Bush took note of the conversation that was preoccupying the country.

"The notion of political correctness has ignited controversy across the land," he said. "And although the movement arises from the laudable desire to sweep away the debris of racism and sexism and hatred, it replaces old prejudice with new ones."

Perry said that she and her colleagues "all believed in consensus and discussion and so on, so we used the term to signify an idealistic belief in something, but the inability of the frail flesh to actually manage always to live up to it. And that's how we used it."

Victor Davis Hanson, a senior fellow at Stanford's Hoover Institution, said that language is being manipulated for political purposes all the time by the left and the right. But liberals, he suggested in an interview, are more concerned with being politically right than being factually correct. Conservatives, he said, prefer to "say whatever you want and let it fall where it is, and we'll make the argument as it is."

"Now," Hanson said, "the left has destroyed the idea of absolute truth and legitimate ends. ... I think it's really dangerous what the left has done. They've created this effort to distort reality through vocabulary and they thought their agenda was enhanced by it."

It is the case that words are weapons in political discourse, and they always have been.

Today, "politically correct" is being used as a "kind of linguistic jujitsu" to disable an opponent's diversity argument, said Vincent Hutchings, a professor of American politics at the University of Michigan. "It is the case that words are weapons in political discourse, and they always have been," Hutchings said.

Trump has blamed "political correctness" for the Orlando shootings, for NBC's decision in 2015 to sever its ties with him over the speech announcing his candidacy, and for a Scottish university's decision to strip him of an honorary degree.

Last month, the writer and academic Moira Weigel wrote for The Guardian that Trump hasn't just rejected "political correctness"; he has reveled in being incorrect.

"Trump did not simply criticise the idea of political correctness – he actually said and did the kind of outrageous things that PC culture supposedly prohibited. The first wave of conservative critics of political correctness claimed they were defending the status quo, but Trump's mission was to destroy it. In 1991, when George HW Bush warned that political correctness was a threat to free speech, he did not choose to exercise his free speech rights by publicly mocking a man with a disability or characterising Mexican immigrants as rapists. Trump did. Having elevated the powers of PC to mythic status, the draft-dodging billionaire, son of a slumlord, taunted the parents of a fallen soldier and claimed that his cruelty and malice was, in fact, courage."

So, to review again: "Politically correct" means cowardly and courageous; invalid or hypersensitive; in step with the orthodoxy; distortion and linguistic jujitsu.

The writer Lindy West offers a way out of this semantic loop: People who think the phrase is used to demonize things like social justice and diversity should drop it altogether and call things what they are.

For years, she said in an interview, "I've had to write the same piece about how being 'politically correct' is good. Letting terms just sit there and calcify and normalize just makes it more difficult to dismantle those concepts that ... language props up."

A tweet recently captured her view about the decades-long debate in fewer than 140 characters: