Accessibility links
A Discomfiting Question: Was The Chicago Torture Case Racism? : Code Switch The man was held captive and beaten by four people who livestreamed the attack. He was white. His tormentors were black. Calling that a hate crime doesn't tell the whole story. 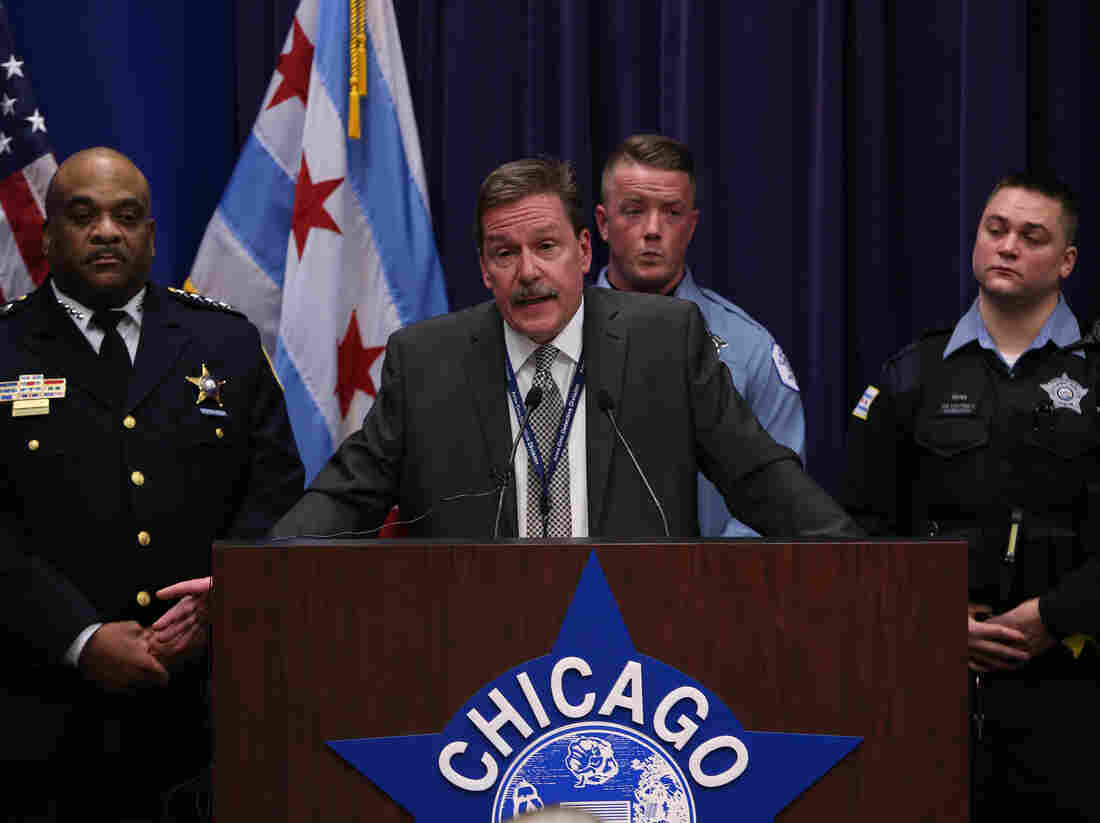 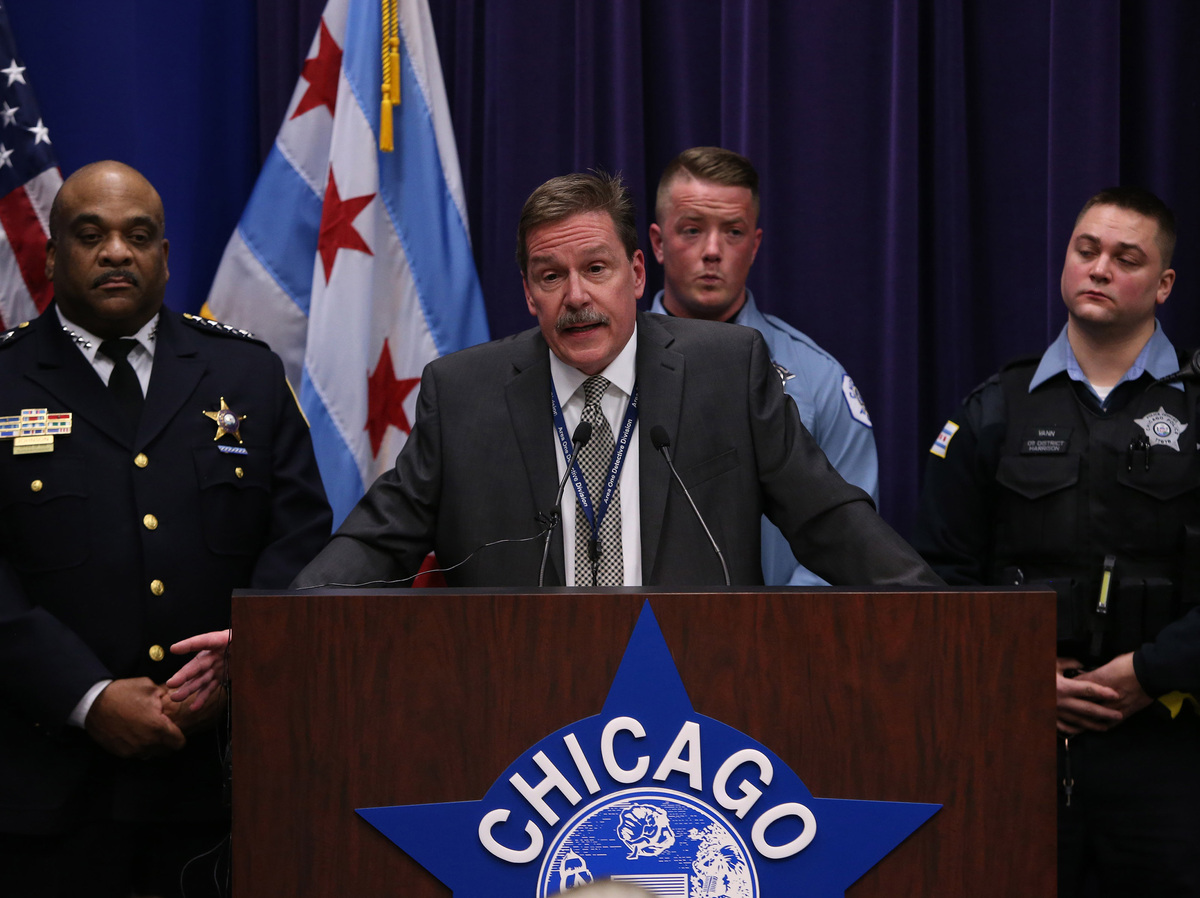 Chicago police Commander Kevin Duffin, speaking during a news conference in Chicago Thursday, describes the kidnapping and hate crime charges filed against four black people who attacked a white man and livestreamed it on Facebook.

The details of the story are unambiguously disturbing. Last week, a white 18-year-old man from suburban Chicago was found walking in the cold, disoriented and bloodied. Four people, all black, had held him against his will for four hours, tied him up, and assaulted him while livestreaming part of it on Facebook.

The young woman who recorded the video laughed and egged her friends on. One of the men took the knife that he waved in the victim's face and cut off the man's sleeves. One of his tormentors is seen on the video slapping him, and at one point, someone sliced at his hair and scalp with a knife, cutting him. His captors yelled "F*** Donald Trump, nigga! F**** white people, boy!" According to the police, his attackers demanded a petty ransom ($300) from his mother. He finally escaped when several of his captors left to argue with a neighbor, and he was found by the police walking with one of the people in the video.

Chicago's superintendent of police described the victim as having "mental health challenges." His four tormentors, including one who was reportedly a school friend, now face kidnapping charges as well as condemnation from all corners. (President Obama told reporters that the incident in his adopted hometown was "despicable.") But there was already a debate over how to characterize the kidnapping. Was it a hate crime?

That's not simply a legal question.

In an earlier press conference, a police official demurred when asked whether this was a hate crime. He said the police had to determine whether the pronouncements in the video were "sincere or just stupid ranting and raving." That prompted angry backlash in some white circles, from those who felt that the case was being treated differently because the victim was white.

"If this had been done to an African-American by four whites, every liberal in the country would be outraged, and there'd be no question that it's a hate crime," Newt Gingrich, the former speaker of the House, said on Fox News.

The police did later file hate crime charges against the four suspects. "There was never a question whether or not this incident qualified as being investigated as a hate crime," police superintendent Eddie Johnson said. Under state law, both the victim's race and his mental health — the police said he suffers from schizophrenia — were protected classes that made hate crime charges possible.

"It's half a dozen of one, six of the other," police Commander Kevin Duffin said.

Whatever the reasons for the kidnapping, his captors cursed his whiteness. The legal specifics of the charges probably matter less than the message they send: Weren't these kidnappers clearly racist? Didn't they deserve the vilification that came with that description? 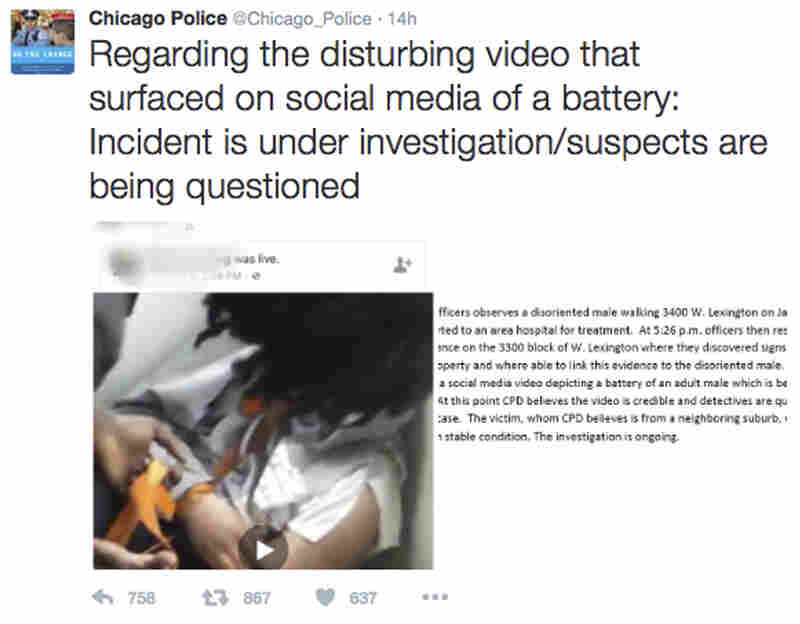 In conversations about this case with friends and colleagues of color, I noticed that folks were straining mightily to avoid using the word racism, as if saying it might be an admission of something. I was squirming right along with them, and it took me awhile to figure out why.

In some ways, this case being called a "hate crime," while a legal designation, might give people a rhetorical reprieve, as it allows us to talk about bias and violence without having to fight over the definition of racism.

It reminded me of something Phillip Atiba Goff, who runs the Center for Policing Equity at John Jay College, told me a few weeks ago. "One of the most important achievements of the Civil Rights Movement was to take the authority over moral character away from white men," Goff told me. "There's no credential that [restores it] — having a black friend or relative is not sufficient."

Before then, white people were the only ones who could define what was righteous and correct — often at the expense of the rights and safety of black Americans. Goff said that the casting of racism as an evil worthy of condemnation made all the ways white people expressed their bigotry taboo. Those taboos are, in part, what people are referring to when they rail against political correctness. And while those new constraints certainly didn't end racism, they suppressed behaviors that created space for people of color to live more fully in America.

And that, to me, seems a big part of what we're really discussing in stories like the one in Chicago, and what makes these conversations (and writing this) so discomfiting. In calling the kidnapping and assault racism, we're staking claim to moral language — and uniquely powerful moral language — to which white people can't easily lay claim, even in cases like the one in Chicago, which seems to qualify for the most vehement reproach available.

And it's why, I suspect, the folks of color I talked to seemed so visibly uncomfortable. Calling what happened in Chicago racism seems to cede at least some of that moral authority to the many people who we suspect are engaging in conversations about race and racism in bad faith; people who want to push the conversation in the direction of a false, ahistorical equanimity.

Is racism as expressed by centuries of white torture and discrimination the same as the racism of the four black people in Chicago? It's a distasteful comparison. It's as if you're downplaying the misery of the young man in the video by reducing this conversation to semantics.

But consider what's already happening with folks from the right-wing Internet, where people are holding up the Chicago case as the handiwork of black activist groups like Black Lives Matter (despite the complete lack of evidence that anyone involved in the kidnapping has ties to the organization). It seems that the people who have embraced this ridiculous claim — the hashtag #BLMkidnapping was used hundreds of thousands of times on Twitter — want to prove some kind of symmetry in American racism. One way to argue that the evil of racism is not uniquely wedded to whiteness is to argue that it is a moral failing that lives equally in blackness.

One way to argue that the evil of racism is not uniquely wedded to whiteness is to argue that it is a moral failing that lives equally in blackness.

It's a notion that seems to be gaining traction even outside the fever swamps. Last year, two professors wrote in the Washington Post about their research showing that white Americans think anti-white bias has been on the rise in recent decades, and that it now constitutes a bigger problem in the country than anti-black bias.

"This perception is fascinating, as it stands in stark contrast to data on almost any outcome that has been assessed," professors Samuel Sommers and Michael Norton wrote. "From life expectancy to school discipline to mortgage rejection to police use of force, outcomes for white Americans tend to be — in the aggregate — better than outcomes for black Americans, often substantially so. (While a disturbing uptick in the mortality rate among middle-aged whites has received a great deal of recent media attention, it is worth noting that even after this increase, the rate remains considerably lower than that of blacks.)"

It's against the further legitimizing of this idea — that there are no distinctions to be made when we talk about racism — that I suspect folks are uncomfortably holding the rhetorical line, especially in this current political moment, rife with calls to validate white grievance. And it's that sense of grievance that this video corroborates, regardless of whether it should; regardless of how poorly it's contextualized.

Not that epistemology matters terribly much to the victim or his family.

The video is chilling. It's easy to go to an even darker place by imagining what might have happened to the victim had he not been able to escape. The captors wonder aloud about killing him. They are performing. They are talking back to their audience. One of the young women complains that there aren't enough people watching. They livestream their torment of this man the way people might Snapchat themselves turning up at a club.

It's the kind of story that's so random and unsettling that the desire for clear, moral parameters feels even more pressing. That's why it's worth wrestling over the language of racism, even if no words can make the event any more comprehensible, or, for the victim and his family, any less calamitous.