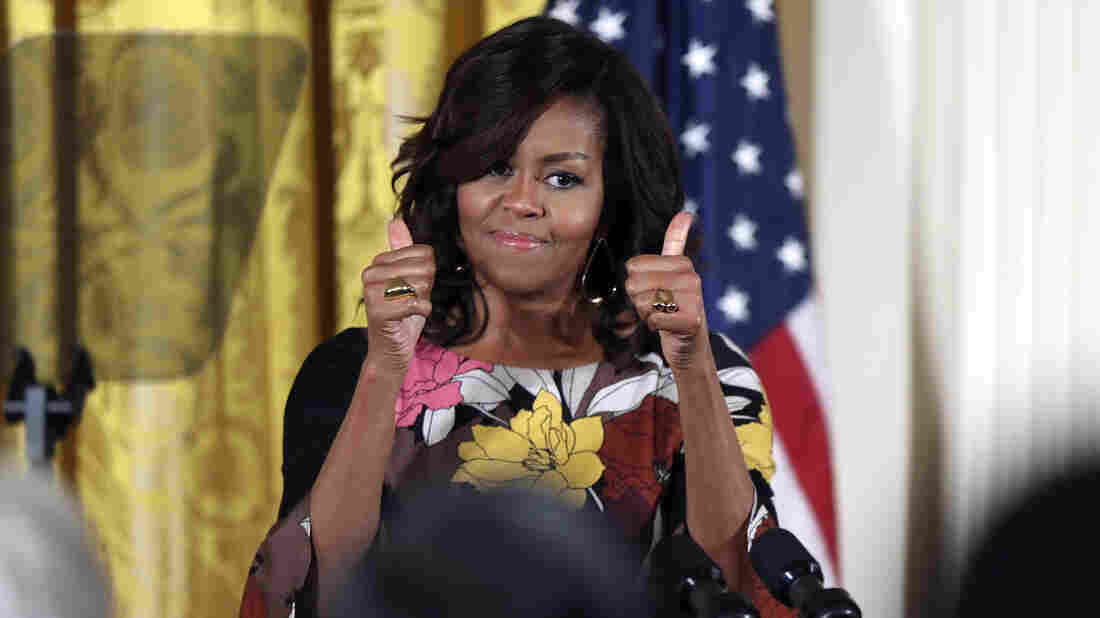 First lady Michelle Obama welcomes community leaders from across the country to celebrate the successes and share best practices to continue the work of the Mayor's Challenge to End Veterans' Homelessness in the East Room of the White House complex in Washington, D.C., on Nov. 14. Manuel Balce Ceneta/AP hide caption 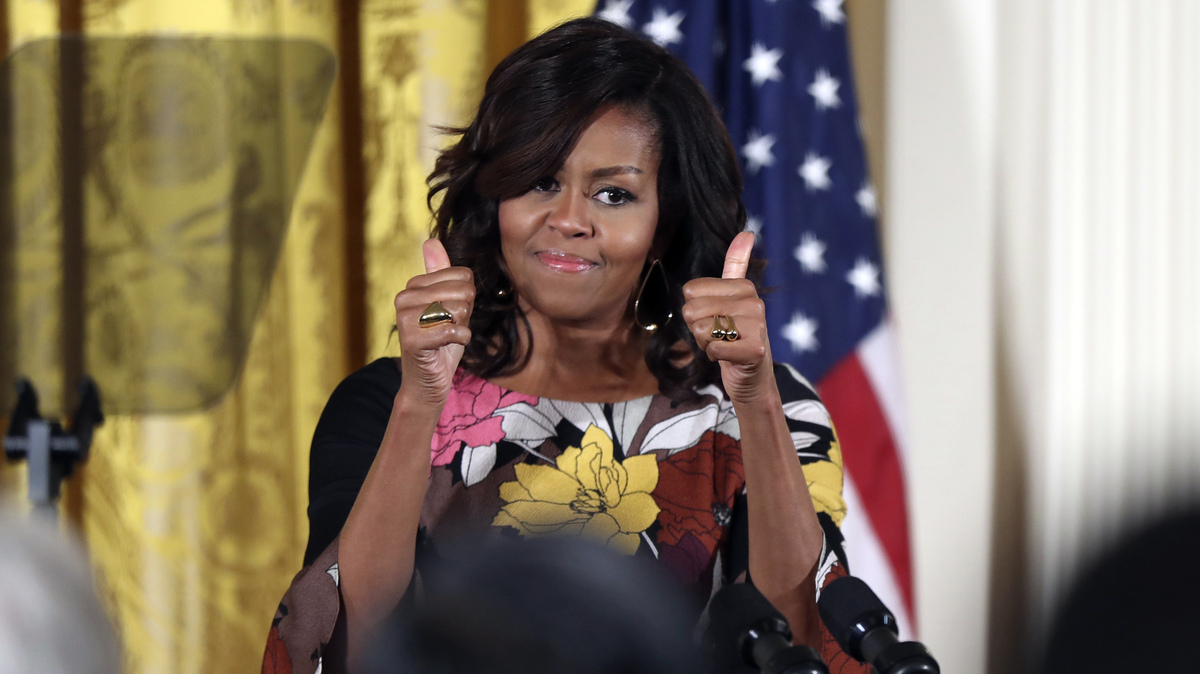 First lady Michelle Obama welcomes community leaders from across the country to celebrate the successes and share best practices to continue the work of the Mayor's Challenge to End Veterans' Homelessness in the East Room of the White House complex in Washington, D.C., on Nov. 14.

Over the past eight years, Michelle Obama — a former attorney with degrees from Princeton and Harvard universities — has dealt with a lot of cheap (and often mean) shots lobbed in her direction. But while she has her detractors, this first black first lady is widely admired — and not just for her famously defined arms (they even have their own Tumblr).

So it's not surprising that, in these last days of disco for the Obama administration, a few fans of the first lady would share their love for her in the just-released book, The Meaning of Michelle: 16 Writers on the Iconic First Lady and How Her Journey Inspires Our Own, a collection of essays edited by author Veronica Chambers.

These writers aren't academically dissecting Obama in her role as first lady. No, these are FANS, so much so that some don't need to call her by her last name. It's just Michelle. Among them is a Top Chef, a jazzy jazz musician, and an original member of the Hamilton cast. Many of the essayists felt a connection, an intimacy with the first lady that Obama helped foster not just by being one of the people, but by reminding black Americans, as Chambers writes, that "blackness is not burdensome, and we ... have joy as a birthright." 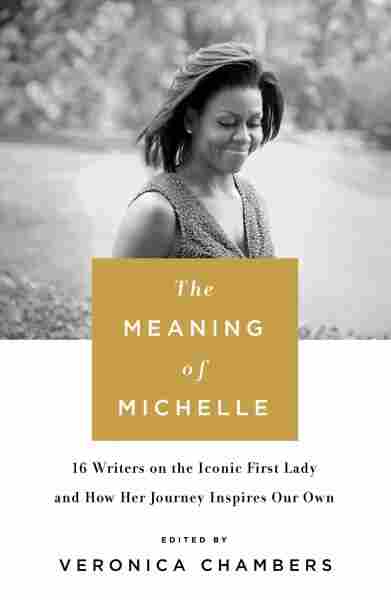 In the book's preface, film director Ava DuVernay declares, outright, that Michelle Obama's mere presence in the White House was like taking a broom and sweeping out the dirt of past administrations.

In one visit, Michelle supplanted the cartoons of Monica, Katrina and their representative presidencies, ripe with mishandled trust and low morals. In that one photo op, Michelle infused the image of the first lady with pride, panache and polish. Many of us saw a woman to be admired. A woman to be trusted.

For many black women, writer Benilde Little sums up that feeling of pride meshed with admiration when she explains why she burst into tears upon seeing a post-2008 inauguration photo of the first lady in The New York Times:

Little describes how Obama's working class-to-Ivy league background helped provide a more fully fleshed out portrayal of black women, something beyond the "perfect pitch, high bourg or stone ghettoians." While the first lady isn't a product of the Jack and Jill set, we know her origin isn't one of black pathology, either.

Nope, her story is the norm for many black Americans: two hard-working parents who pushed and encouraged her to aim high and do well, which she did. Then she got married and had some kids.

Read an excerpt of The Meaning of Michelle

Feminist Brittney Cooper put it real plainly in her essay:

She is, as blogger Damon Young writes in his essay, "a regular black chick." (He means that in a good way, trust me).

While black Americans collectively saw her and saw our sisters and cousins and aunts and moms, we (black men) saw her and saw our classmates and our neighbors; our coworkers and our colleagues. We saw the woman we wanted to approach, to court, to date, to commit to, to marry, and to start a family and grow old with, even if we didn't actually realize we wanted to do any of those things before we saw her.

In fact, Michelle's regular-ness and sista girl realness comes up a lot, as writer after writer describes how she made the White House — and her husband — seem more relatable.

Not all of the essays are perfect, but I don't think readers will come away from this collection disappointed. They are reflections on a woman who feels like a good girlfriend to a large portion of the American public, though they only know her from afar. And the wistfulness in them brings to mind an oldie but goodie from Boyz II Men: