Accessibility links
Women's March On Washington Recalls The Touchy History Of Race And Feminism : Code Switch Even as the march's diversity was being celebrated, it was also causing tension. "Historically, the term 'woman' has implicitly meant white women," says a gender and Asian-American studies professor. 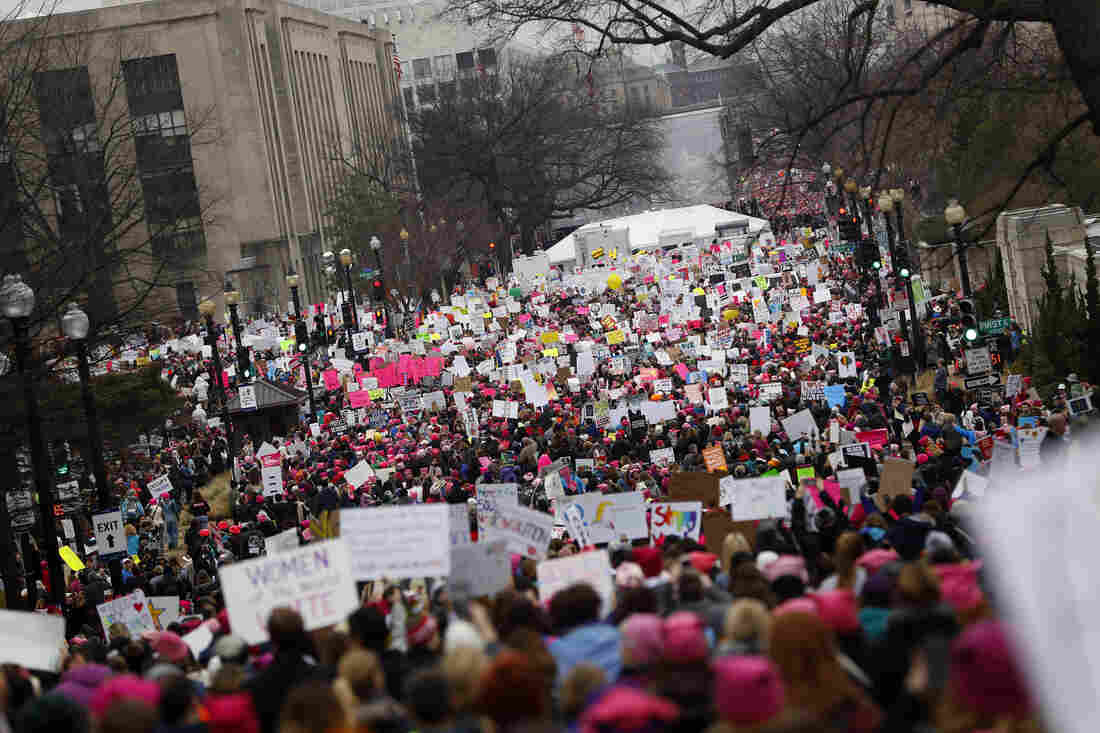 The streets of Washington looked vastly different the day after Donald J. Trump's inauguration than they did the day-of. Instead of the largely white crowds that lined Pennsylvania Avenue on Inauguration Day, people of all colors, classes and ages filled the streets for what's being called the most diverse march for women's rights ever.

The Women's March On Washington drew tens of thousands to the nation's capital to press for protection of women's rights, including reproductive health care, LGBT issues and equal pay. "Sister marches" held concurrently in every state across the nation, (and in several cities abroad) added to the numbers and the diversity.

But all that diversity came with a cost: racial tension — not just around the march itself, but around the feminist movement, who leads it and why. Some bemoaned the discord as a distraction from the march, saying on this occasion, "we should all be women first."

As Trump Is Sworn In, Supporters Debate His Role In Healing Racial Wounds

Grace Hong is not surprised. A professor of Asian American and Gender Studies at UCLA, Hong says for decades, white women didn't have to consider any interests beyond their own because "historically, the category 'woman' has, implicitly, meant white women." The call to put womanhood above all else, Hong says, is based on the idea that "critique and dissent undermine a unity that's based on the lowest common denominator: Find the one thing everyone has in common."

The fact that the feminist movement was so white for so long, says Ashley Farmer, is the reason so many women of color steered clear of it. Farmer is a historian at Boston University, and concentrates on African-American women's history. She says women of color noticed when their interests and needs didn't get a full hearing. 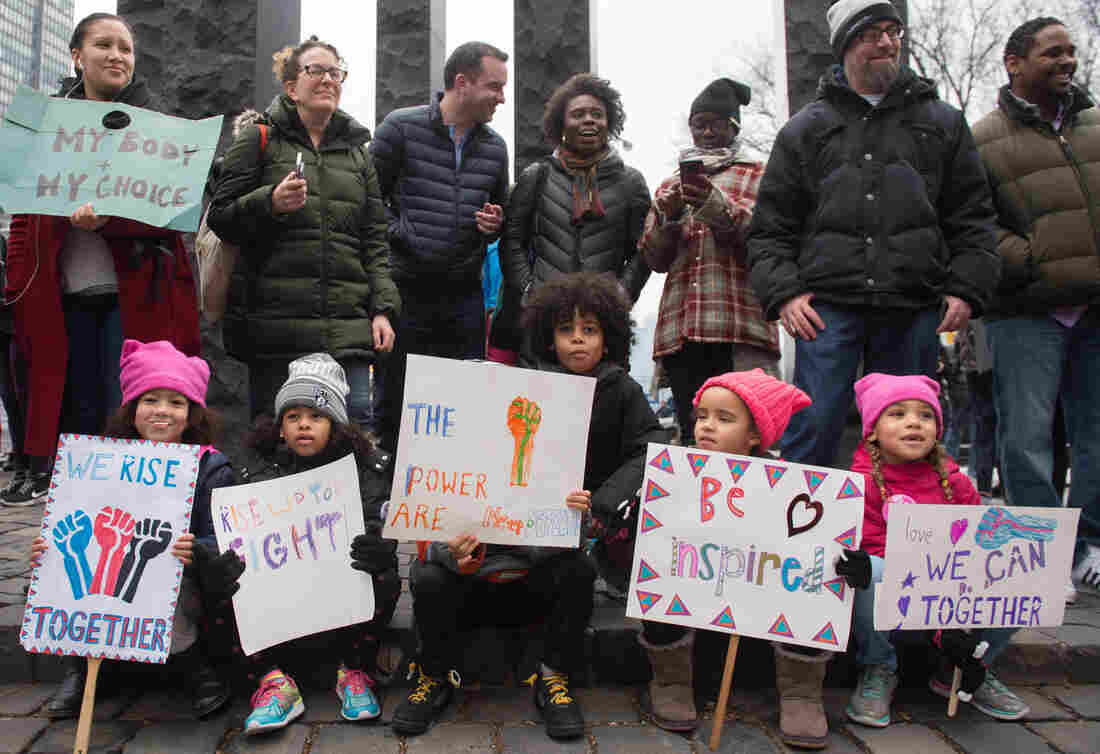 Protesters gather in New York City for the Womens March on Saturday. The march was held in solidarity with similar events taking place in Washington and around the nation. Brian R. Smith/AFP/Getty Images hide caption

"When we actually get down to representation or creating a list of demands or mobilizing around a set of ideas," Farmer says, "it tends to be that white middle-class or upper-class women's priorities get put above the rest."

It was that way in the 1850s, when some feminists split over whether to champion abolition or women's rights. (That's when Sojourner Truth gave her famous "Ain't I A Woman?" speech at a women's rights conference in Ohio.)

It was that way in the late '60s and early '70s, when "Sisterhood is Powerful" became a rallying cry — but with very few exceptions (Flo Kennedy, Shirley Chisholm, Eleanor Holmes Norton) brown and black sisters were very much on the sidelines. It's why some African-American women, like writers Alice Walker and bell hooks, chose to refer to themselves as "womanist," not feminist. They refused to divorce their race from their gender. (They were intersectional before intersectionality as a term came into existence, created by black feminist legal scholar Kimberlé Crenshaw.)

Today, "womanist" also resonates with a younger generation of feminists, not all of them black. Dolores Arredondo, a marketing executive with Wells Fargo, in Los Angeles, has been calling herself a womanist for years, in direct response to what she saw as white feminists' exclusion. "I just remember this history of the feminist movement," Arredondo shrugs. "I can see the history, and none of them looked like me." Arredondo attended the Los Angeles march with her 13-year-old daughter Sophie. 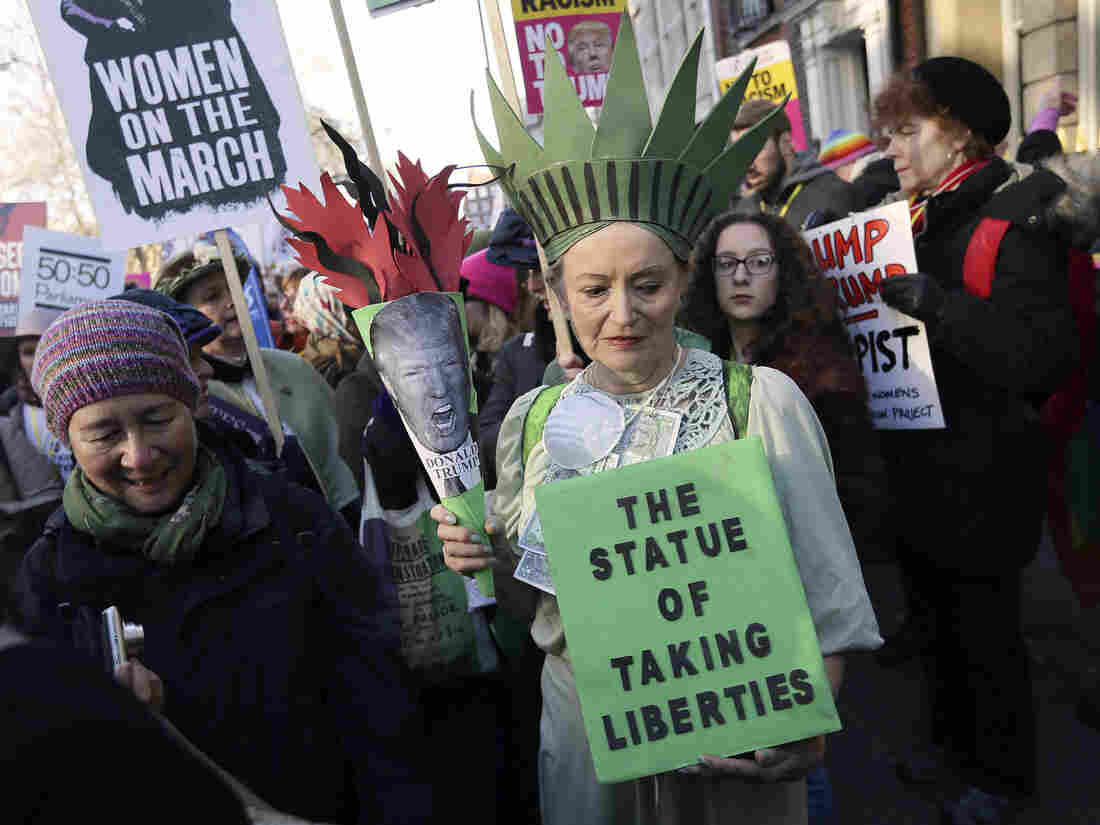 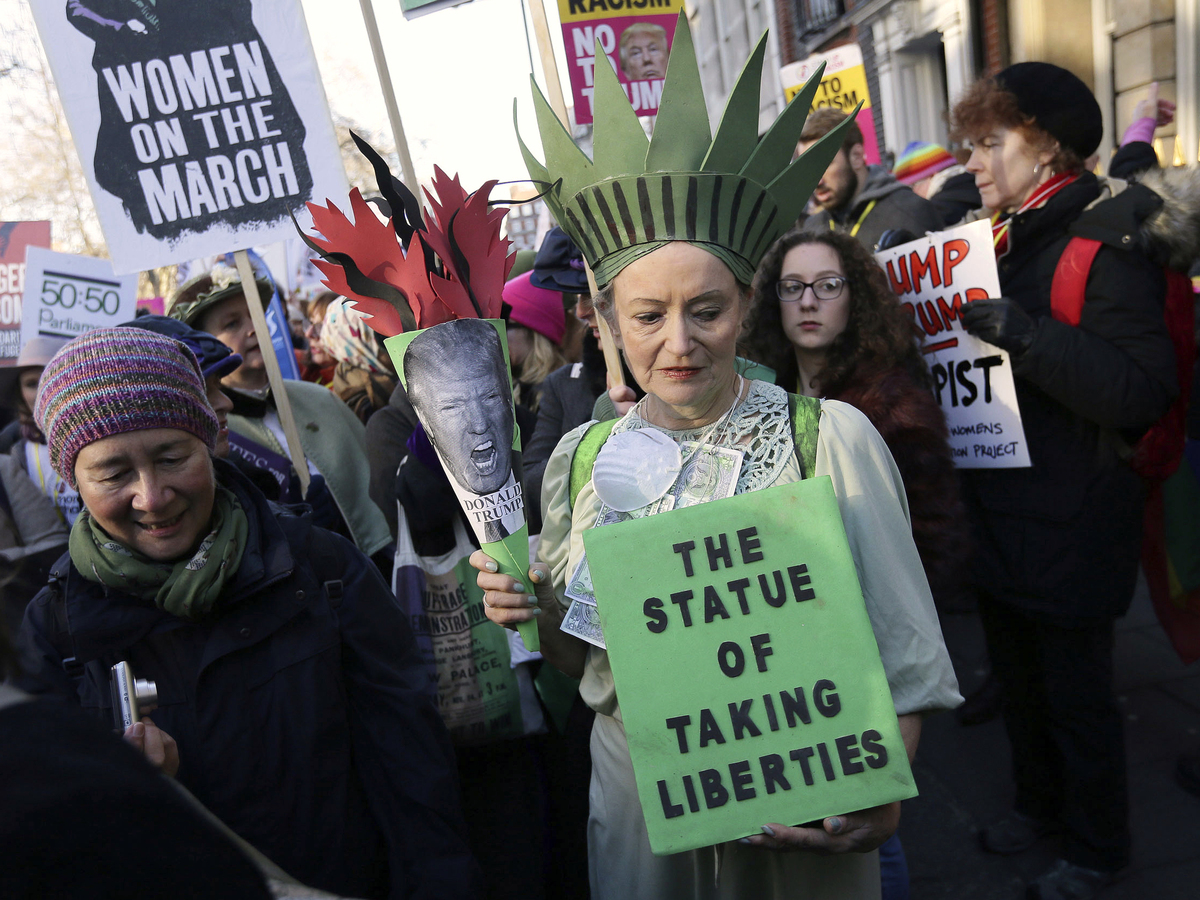 Demonstrators take part in the Women's March on London, following the Inauguration of U.S. President Donald Trump, in London, Saturday.

"It means badass!" she says, gleefully. "A chingona is someone who is not afraid to stand up for what they believe in, somebody that's happy to shake things up when needed." Chingonas, she says, get things done. And they come in all races and genders.

The Women's March on Washington started out pretty white, but quickly added young women of color in positions of leadership. They're three of the four main organizers, and a lot of attention has been paid to how diverse this march has been in contrast to earlier ones. But even as the march's diversity was being celebrated, it was also causing tension.

When ShiShi Rose, a young black Brooklyn blogger, wrote an Instagram post advising white women allies that "now is the time for you to be listening more, talking less." She suggested they become more conversant in culture beyond the mainstream standard. Some white women were so offended that they cancelled plans to attend the march.

Margo Jefferson doesn't have much patience with that. A Pulitzer Prize-winning cultural critic for The New York Times for years, (and part of the Artist Table of creatives and celebrities who participated in the New York sister march) Jefferson remembers being one the few early black feminists who called themselves that. ("Of course I was lonely back then," she admits. "It was harder for black women to make a feminist movement in the 1970s.")

Jefferson advises white women who were offended by Rose's post to "Sit back. You're associated with a history that has to do with being bossy and self-absorbed and bigoted in some ways. I can see how that would rattle, and even anger you," she says gently. "But I do not consider it reason enough to cancel an attendance at a march like this. Get over it." 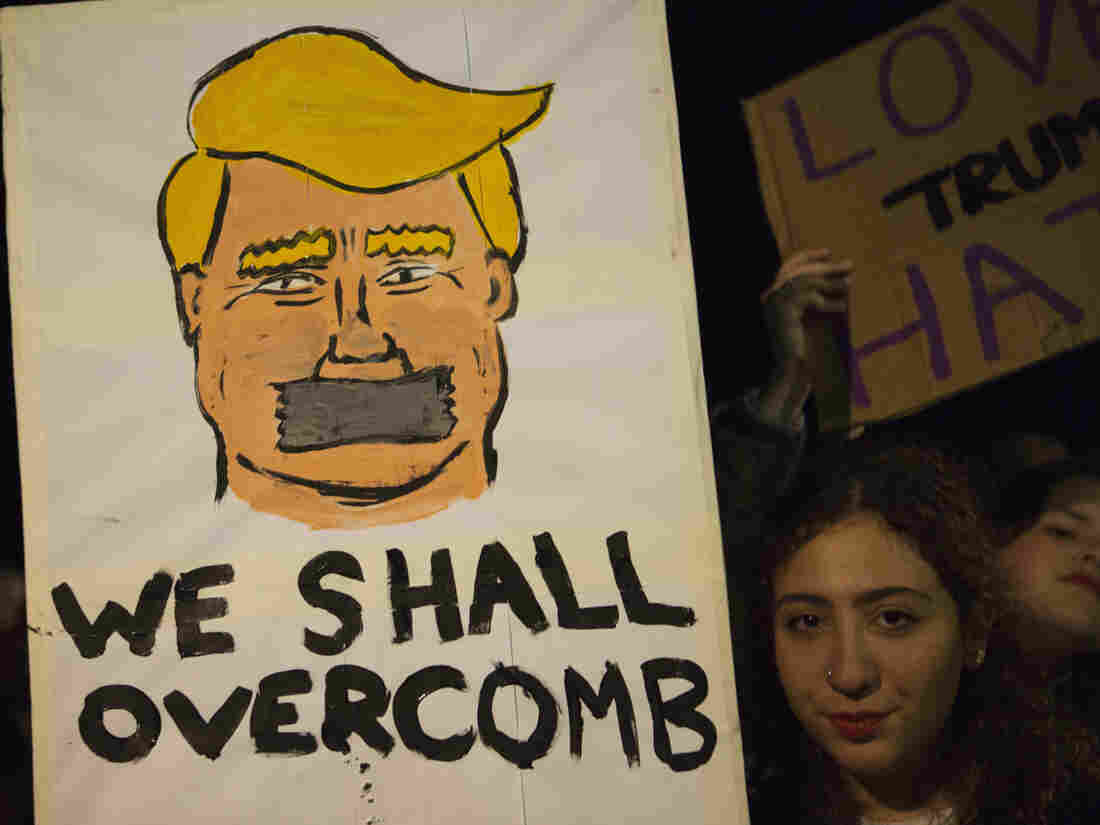 Demonstrators take part in a Women's March following the Inauguration of U.S. President Donald Trump, in front of the US embassy in Tel Aviv, Israel, Saturday.The march is being held in solidarity with the Women's March in Washington, and other cities worldwide, advocating women's rights and opposing Donald Trump's U.S. presidency. Ariel Schalit/AP hide caption 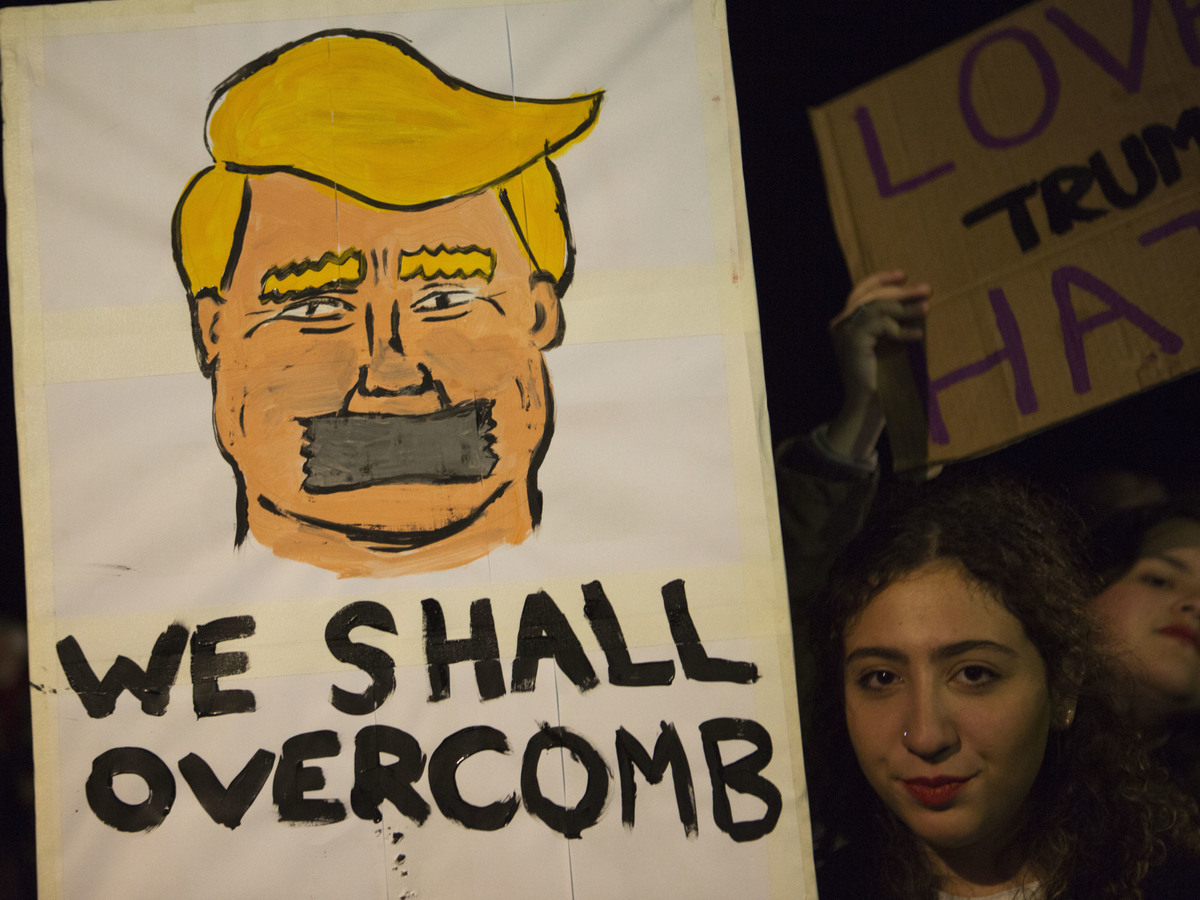 Demonstrators take part in a Women's March following the Inauguration of U.S. President Donald Trump, in front of the US embassy in Tel Aviv, Israel, Saturday.The march is being held in solidarity with the Women's March in Washington, and other cities worldwide, advocating women's rights and opposing Donald Trump's U.S. presidency.

Julie Wittes Schlack is a Boston writer and corporate executive who was neither rattled nor offended by criticism from women of color. If the movement is going to progress to the next level, Schlack believes, white feminists like her are going to have to deal with some hard truths. They are right to be proud of their contributions to women's progress in this country, she says, but more needs to be done.

"The benefits of our work so far around things like reproductive rights aren't conferred equally across all women," Schlack points out. "And that's what I think younger feminists, feminists of color, particularly, are trying to wake us up to." The issues are broader, messier, more intersectional: race, gender, class, nationality, immigration status, everything is connected.

The wake-up Schlack refers to won't just benefit women of color, points out Boston University's Ashley Farmer: "When you make something that accounts for the most oppressed, everybody's life tends to get better."

And maybe, she says, these marches are the next step toward having those tough, but necessary, talks.