Accessibility links
My Menu For Lunar New Year: Guilt, Confusion, With A Side Of Angst : Code Switch When you're hosting this symbol-rich holiday for the first time, how do you assume ownership of rituals you don't cherish? 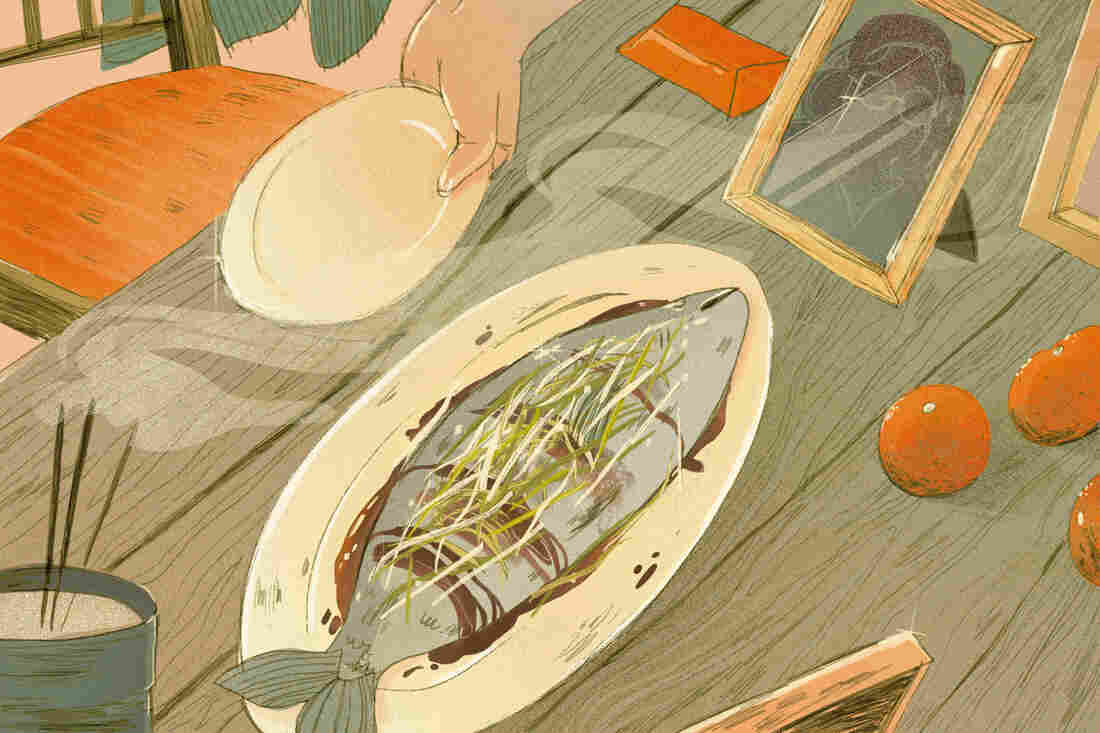 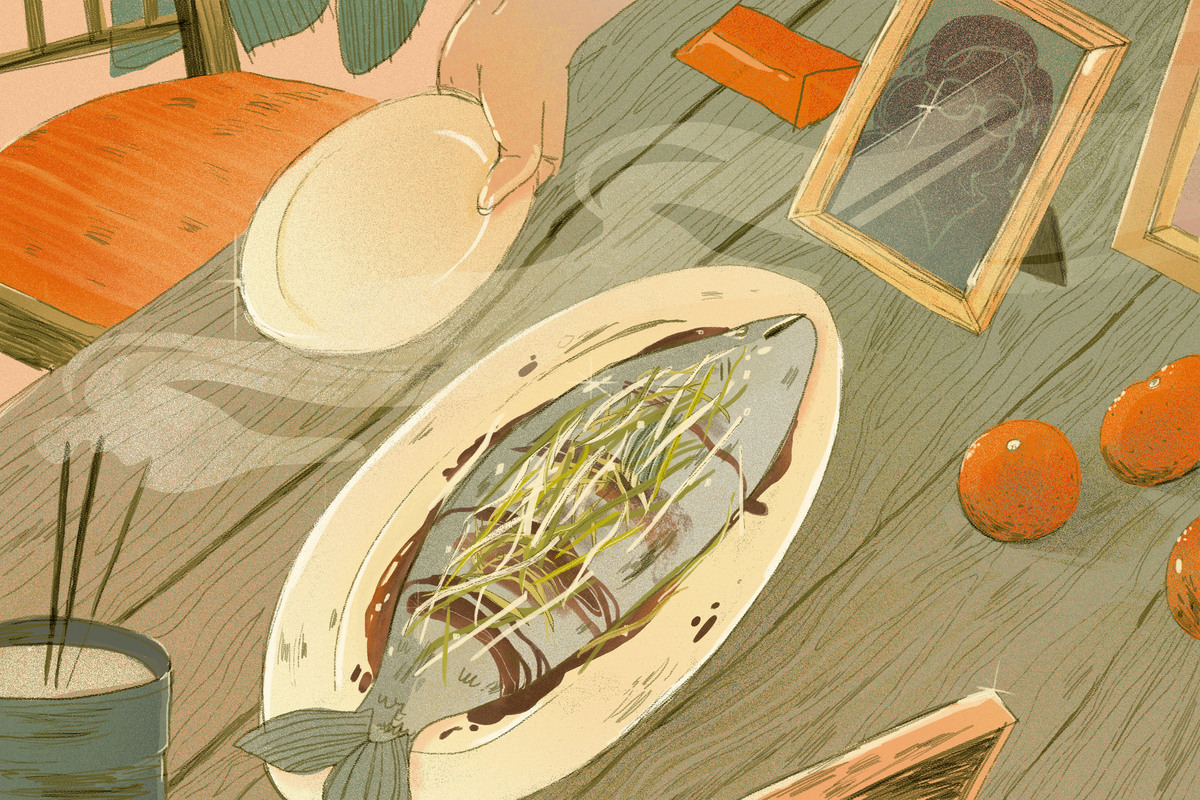 My family's typical Chinese New Year's Eve included incense, praying to our ancestors and digging into a giant spread of symbolic foods.

I'm in the middle of tapping out an email to my dad, deleting and retyping sentences.

Maybe I'll cook noodles (symbolizing happiness, longevity) or dumplings (symbolizing wealth). I don't tell him what I'll do exactly. This is the first time in my adult life, apart from drinking parties organized under the guise of making dumplings for Lunar New Year, that I've paid attention to this holiday.

My dad is unbothered by the truncated menu. In his email back to me, he focuses more on the train he'll take to New York, the one after 3 p.m. when the station offers free parking.

Chinese New Year had always felt to me more like stiff spectacle than warm family tradition, and fleetingly, I feel guilty for hijacking his holiday by moving it from his place to mine. I'd invited him because it was time for a visit and because I didn't want to make the three-hour trek to his house in Connecticut.

I wonder if, with my laziness, I've sped up the generational hand-off of customs that comes when a kid assumes more leadership in a family. Like hosting a Lunar New Year dinner. I also wonder if I'm cheapening a tradition.

When you're the child of immigrants, assuming ownership of rituals you don't cherish is fraught. How, if at all, do you carry this tradition forward?

The Lunar New Year of my youth:

Dad pushes our kitchen table to the center of the room. He's clearing space for the family to stand and pray. He and mom coat the table with platters of fish (symbolizing surplus, prosperity), black moss noodles (more prosperity), roast duck, poached chicken with ginger and scallion oil. Before we eat, my parents set out framed photos of our dead relatives (symbolizing filial duty, I guess) next to the food offerings.

My parents set the paper on fire to send to the ancestors, a flaming postal service for the dead.

Earlier in the day, my sisters Stephanie and Caroline and I trim our hair (symbolizing good luck), fold joss paper into bullions and cut up tissue paper into teeny shirts and pants. My parents set the paper on fire to send to the ancestors, a flaming postal service for the dead.

We light incense. Clasping the puffing sticks in our palms, we bow three times (symbolizing ... I don't know) and dispose of them outside on the back deck. The smoke from the incense licks our eyeballs and clings to our winter jackets, which we wear throughout the night (symbolizing we're cold).

We light more incense, bow over and over and over for each dead relative, then walk out back into the snow and drop the smoldering sticks in a cinder-filled Folger's coffee can.

Years later, when my mom dies, we add her photo to the altar. I make tissue dresses for her, which my dad burns. This is the only day he acknowledges her presence and her death. I don't really get this holiday, but I bow three times. I eat the fish, the noodles, the duck, the chicken. I don't buy what it symbolizes, but it means something.

A story of assimilation

As I do several times each week, I called my dad on my way to the subway station. We talked logistics for Friday. I told him we could burn incense on my fire escape, which could defeat the purpose of fire escapes. (Our neighbors called the cops one Lunar New Year when they thought our house was on fire.)

"If there's one thing I cook, what should it be?" I asked him.

He launched into a brief but still-too-long ramble about how in Chinese, the word for fish, yú, is a lot like the word for prosperity, yúshēng. I was half-listening. My lifelong disgust-slash-fear of having to cook food that looks back at me had returned. Why didn't I just suggest we go to a Chinese restaurant, like so many other Chinese-Americans, and gorge ourselves on an elaborate spread?

And I didn't even want to think about getting on the F train and smelling up a subway car with the perfume of dead fish. 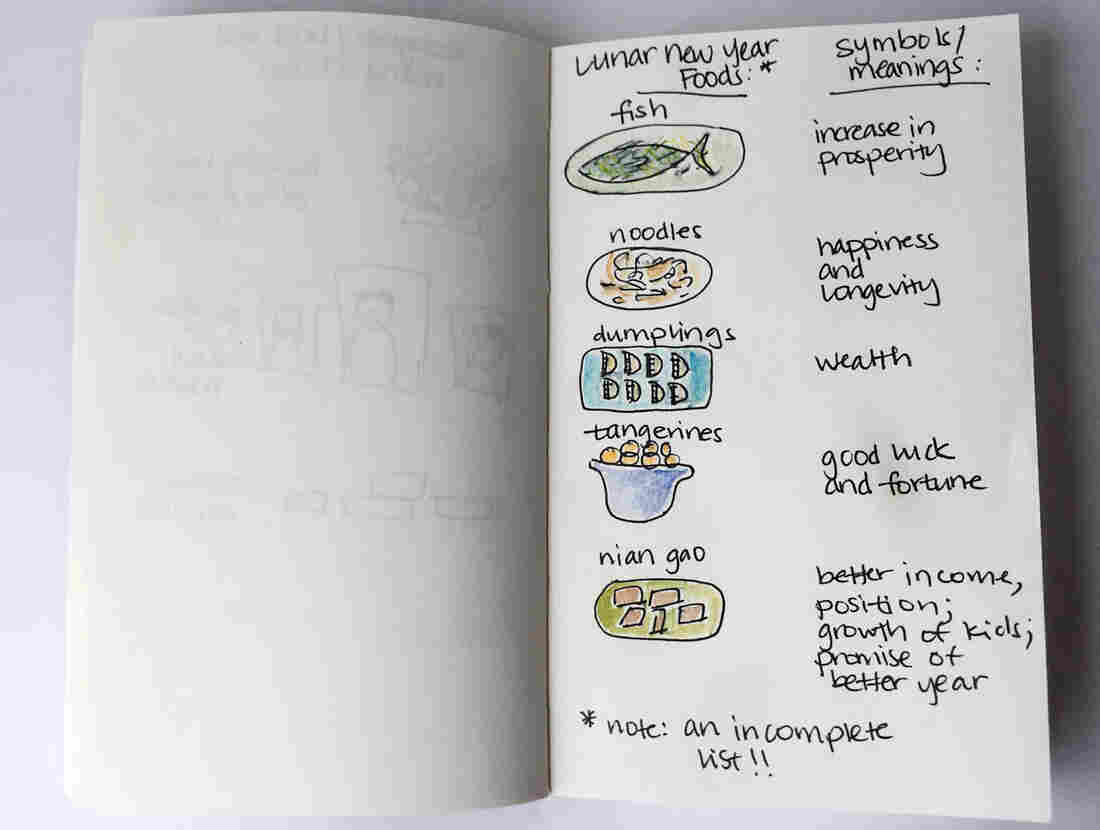 The word for fish, yú, in Chinese, my dad says, sounds a lot like the word for prosperity, yúshēng. Kat Chow/NPR hide caption

How do I carry this tradition forward?

I asked friends and strangers on Twitter how they celebrate the holiday. I got a lot of tweets about money-filled red envelopes and the glutinous rice cake called nian gao (symbolizing more money, more status, healthy children). It seemed like their family's versions of the New Year are kind of ... joyful.

But I needed more. I wondered what the holiday meant in the late 1800s and early 1900s, when Chinese immigrants were first coming to the U.S. How did they do things back then? How did they handle this generational hand-off thing?

I turned to NPR's researchers for help and got a virtual stack of articles. They were mostly brownsplainy and culture-gawky stories about parades and firecrackers. But one article from 1913 in The San Francisco Call caught my eye. The reporter wrote that the holiday was a "fizzle." On Chinese New Year, the writer noted, the stores in Chinatown must remain closed per tradition. But "the younger spirits—revolutionists—wanted to keep the stores open and neglect the celebration," the reporter wrote. "These young republicans held their celebration, observing the Gregorian calendar."

It seems that this day has always been divided by generation. To see if my gut-intuition angst was legitimate, I asked Janelle Wong. She's the head of the Asian American Studies Department at the University of Maryland, College Park. She crunched some numbers from a 2012 Pew Research Center report, and I saw I wasn't so unique.

She told the story of assimilation with five numbers.

Passing along the tradition

All across the country this weekend, major cities with established Asian populations will roll out Lunar New Year parades with great fanfare, including some big ones in San Francisco, New York, Washington D.C., and Las Vegas. There will be dragon dances on Chinatown streets that are narrowing with gentrification.

I will be in my old Brooklyn apartment with my dad, burning incense on my fire escape.

I called him for the second time this week. I wanted to know how he felt about me hosting. My dad's not big on feelings, and he responded by talking about the weather; how he might have to bail on our plans if it snowed. I tried again. Was he happy that I'm hosting the New Year dinner this time?

I could hear his shrug through the phone. Yeah, he said eventually, sounding close to happy, this is how "culture gets propagated."

It's odd to think about traditions propagating. They aren't exactly cultivated the way a plant cutting spawns more plants. To me, it's like they've been jammed into some generational paper shredder. They emerge on the other end, made of the same wood pulp.

It's odd to think about traditions propagating. They aren't exactly cultivated the way a plant cutting spawns more plants.

Clearly, I was in a Lunar New Year Crisis (symbolizing guilt), so I called Russell Jeung. He's a San Francisco State University professor who wrote a book about sustaining faith traditions. In a call that felt part Dear Prudie, part Dear Professor, Jeung helped me through my LNYC. He told me this is normal; that a lot of people he talked to for his research said that — while they celebrate the holiday — they "don't understand a lot of the meanings behind the practices."

There are no scriptures or doctrines that teach people how to do Lunar New Year, and that's the beginning of Jeung's explanation for why I might be experiencing what he called "dissonant acculturation." Here's the rest:

It was hard to know if I should be comforted that my "dissonant acculturation" is really out of my hands; that the forces of American culture make it tough to hold on to this tradition.

"Should I feel guilty?" I asked Jeung toward the end of our conversation. It always comes back to guilt.

Not the best sell for someone on the fence.

Stephanie, the oldest, is the first to text back.

"I think the burning things and ceremony are soothing and comforting," she writes to me and Caroline. "I like buying into the Chinese superstitions because it somehow makes me feel prideful of being Chinese. ... It's like honoring being Chinese, and whoever taught it to you."

Later that night, I try to decide which photo of my mom I should use when my father and I pray. It connects us to a past we shouldn't forget.

I don't know if I'll ever buy into the symbolism behind Lunar New Year. But I made the trip to Fei Long Market in Brooklyn on Thursday.

And I bought the damn fish. 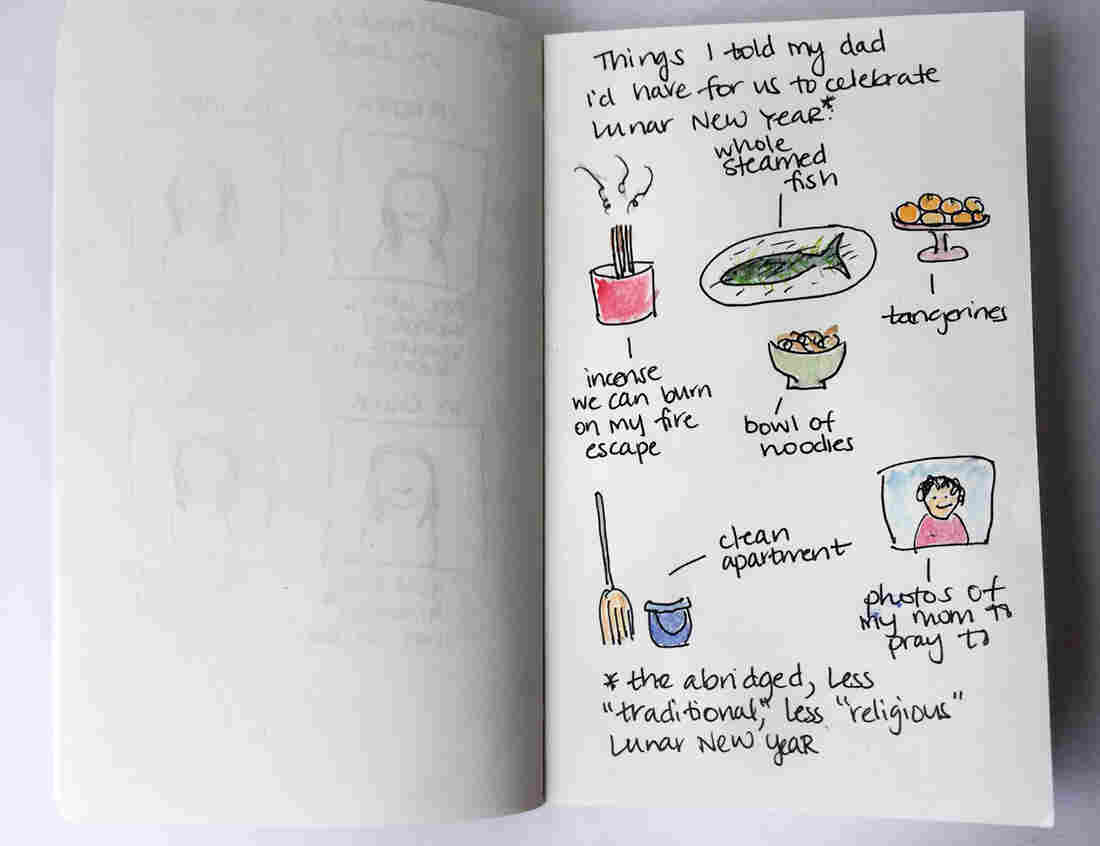 My to-do list for Lunar New Year: It's best to sweep the day before, because doing that on New Year's Day will sweep away any good fortune. Kat Chow/NPR hide caption