Accessibility links
This Week In Race: Executive Orders, Voter Dilution, Roxane Gay And ... Cornbread : Code Switch It's been a busy week on the race beat, to say the least. Here are some pieces from all across the internet that the Code Switch team especially dug. 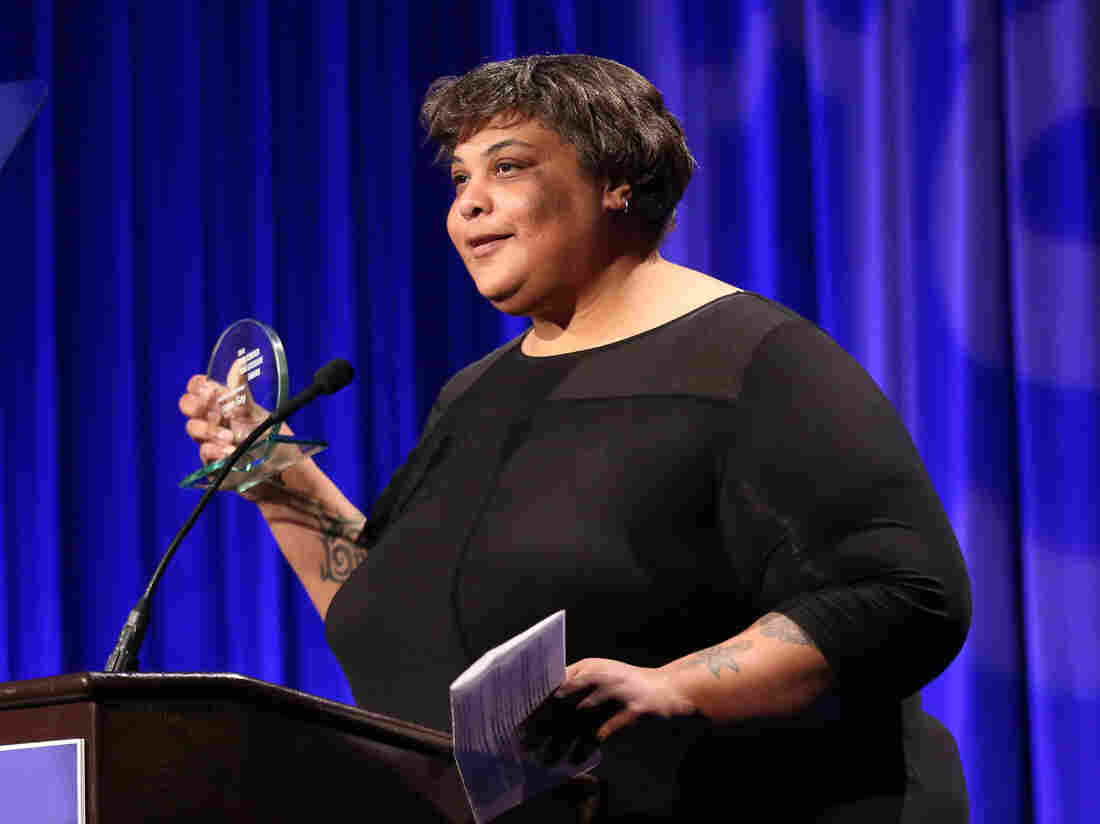 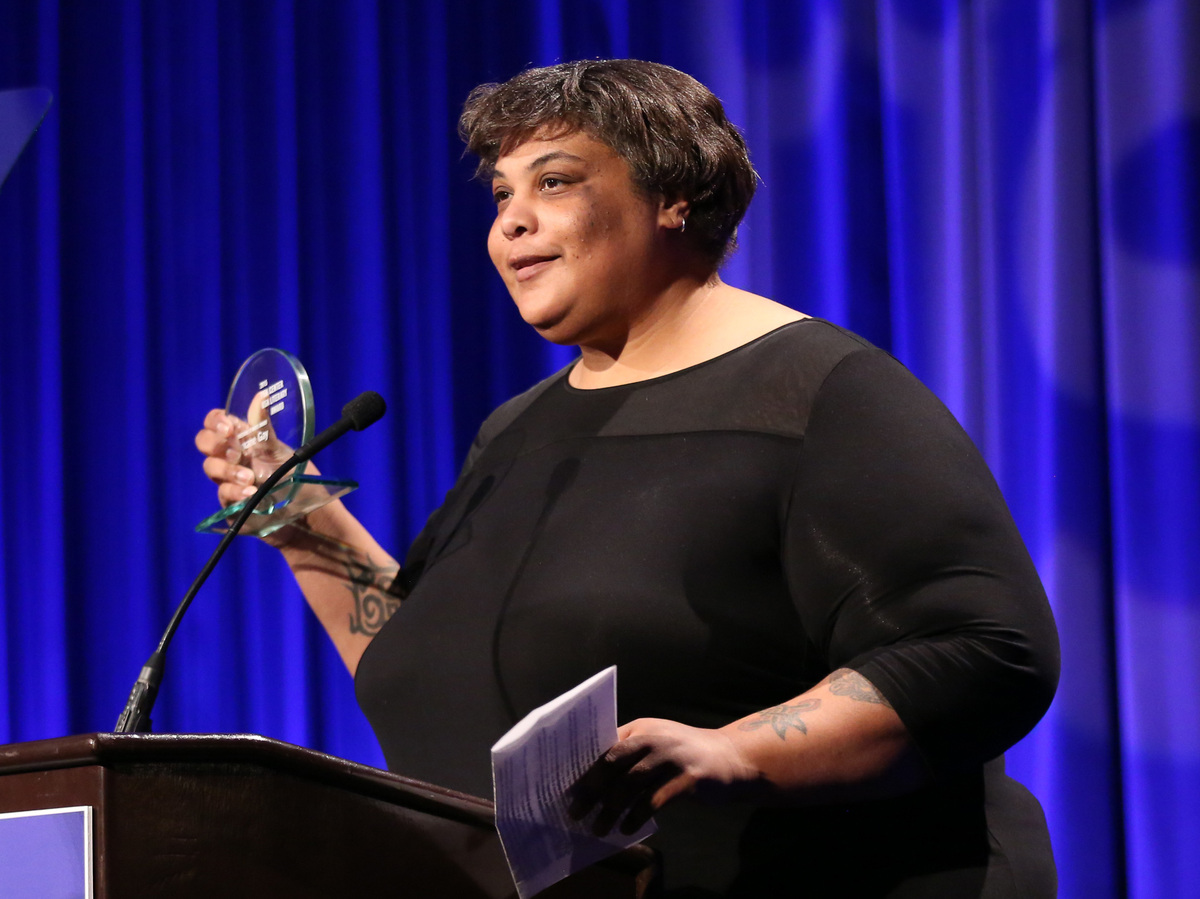 A lot happened on the race beat the past few days; so much so that it prompted Code Switch's Shereen Marisol Meraji to channel Kendrick Lamar in this week's podcast: Maybe we all need to dive into Lamar's giant pool of liquor. Pour. Drink. Pass out.

Dominating the news were President Donald Trump's executive orders. One calls for the construction of a massive wall along the U.S.-Mexico border. Another promises to cut federal funding for so-called sanctuary cities if they refuse to cooperate with federal immigration officials. A third clears the way for construction of the Dakota Access Pipeline, which Native Americans have fought passionately to prevent. POTUS is also issued executive orders that halt the Syrian refugee program and suspend immigration from predominantly Muslim countries, including Iraq and Iran.

Here are some non-executive-orders links that passed over our transom.

CityLab's Brentin Mock digs into voter dilution, which he argues is the real voter fraud.

"If Trump would like to see real evidence of fraudulent election activity, there are plenty of cities and counties for him to examine. He should Google "voter dilution." It's what happens when a city or county creates council districts where it would be impossible for minority residents to elect a candidate of their choice. This typically is achieved by replacing a council district where people of color constitute a majority with an at-large council seat that is elected by voters across the entire city or county. As a majority within a district, voters of color can elect a candidate of their preference, but if they are a minority across a city or county, their candidates can not compete for an at-large seat. It happens often, and there is plenty of evidence of it."

Just look to Pasadena, Texas, Mock writes. In 2013, Pasadena lawmakers redrew the city's district lines, making it very difficult for Latino residents to win any of the at-large seats.

The Center for Public Integrity's Talia Buford, who has reported extensively on the water crisis in Flint, her hometown, has more:

"In a letter dated Jan. 19, the last full day of the Obama administration, the EPA's External Civil Rights Compliance Office said the evidence showed that 'African Americans were treated less favorably than non-African Americans' during permit hearings for the Genesee Power Station – which burns wood waste and other debris – from 1992 through 1994. A 'preponderance of the evidence in EPA's record would lead a reasonable person to conclude that race discrimination was more likely than not the reason ...,' office director Lilian Dorka wrote to the complainant, Father Phil Schmitter of the St. Francis Prayer Center in Flint.

"In a statement, Schmitter said, "Communities of color and schoolchildren have had to grow up near this horrible power plant and be subjected to its harmful emissions. It's unbelievable that it took EPA decades to make this finding, but it's important to send a clear message to [the company] that it needs to change the way it does business."

Gay, the author of Difficult Women and An Untamed State, pulled her forthcoming book, How To Be Heard, from the publishing house, citing its reported $250,000 deal with Breitbart editor Milo Yiannopoulous. Gay described Yiannopoulous' work as "blunt, inelegant hate and provocation." BuzzFeed's deputy books editor Jarry Lee had the scoop, along with a statement from Gay:

"I just couldn't bring myself to turn the book in. My editor emailed me last week and I kept staring at that email in my inbox and finally over the weekend I asked my agent to pull the book. ...

"And to be clear, this isn't about censorship. Milo has every right to say what he wants to say, however distasteful I and many others find it to be. He doesn't have a right to have a book published by a major publisher but he has, in some bizarre twist of fate, been afforded that privilege. So be it. I'm not interested in doing business with a publisher willing to grant him that privilege."

How a slavery-era outbreak was linked to cornbread

Mark Essig, a writer and historian, wrote for Atlas Obscura that many white Southerners blamed the outbreak of a disease named pellagra on the abolition of slavery. After slavery ended, they started getting their corn from the Midwest, which they concluded was tainted as it was transported. Some Southerners also thought "badly made cornbread" — i.e., cornbread not made by enslaved people — was tainted by pellagra. Cornbread free of the disease needed to have fingerprints, Essig reported:

"Those fingerprints served as evidence of who was missing: The cooks of the Old South. The Macon Daily Telegraph explained that real cornbread required 'a hickory wood fire, an iron skillet and lid, and an old negro mammy. ... She will mix the meal and water, fashion it into pones in her hands, drop the pones into the hot skillet, [and] pat them with her hands.'

The Civil War, by freeing enslaved cooks, had deprived white Southerners of proper bread. And it wasn't just the cook who was missing—it was an entire social fabric, imagined through a fanciful vision of antebellum racial harmony known as the 'Lost Cause' — the belief that Southern ideals had been sanctified by the blood of the fallen, that slavery civilized the enslaved, that God had ordained white supremacy."

Labeling the Muslim Brotherhood a terror group has "hidden dangers"

In an op-ed piece for The Washington Post, said that those conducting research on the Brotherhood "could find themselves at risk of prosecution for 'material support' of terrorism." More from March:

"Whatever else it may be, the Muslim Brotherhood is an organization that has been studied, contacted — and in some cases advised — by a large percentage of academic researchers, journalists and analysts working on the Middle East. This raises a multitude of questions: What would it mean legally if the Brotherhood were officially designated a Foreign Terrorist Organization (FTO)? Could its files be subpoenaed? Could the publishing of interviews with Brotherhood members be designated as material support? Could speech activities related to defending the ideology and worldview of the Brotherhood, perhaps by contrasting it with more radical forms of jihadist ideology, be subject to prosecution?"