Accessibility links
Why Sanctuary Cities Are Safer : Code Switch President Trump has taken a hard line against "sanctuary cities" that don't aid federal officials in deporting immigrants. But a new study shows that those cities have lower crime and unemployment. 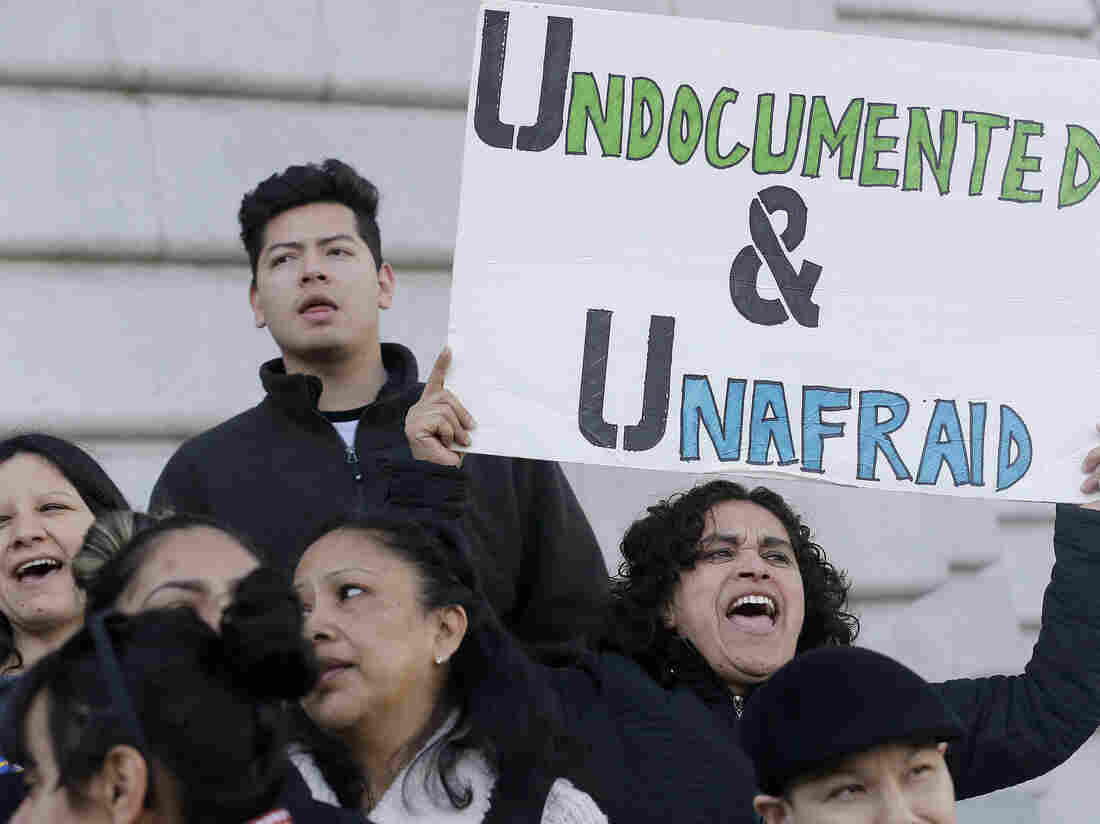 Lordes Reboyoso yells at a rally outside of City Hall in San Francisco to protest President Donald Trump's aggressive moves to tighten the nation's immigration controls. A new study showed that sanctuary cities like San Francisco are safer and have stronger economies. Jeff Chiu/AP hide caption 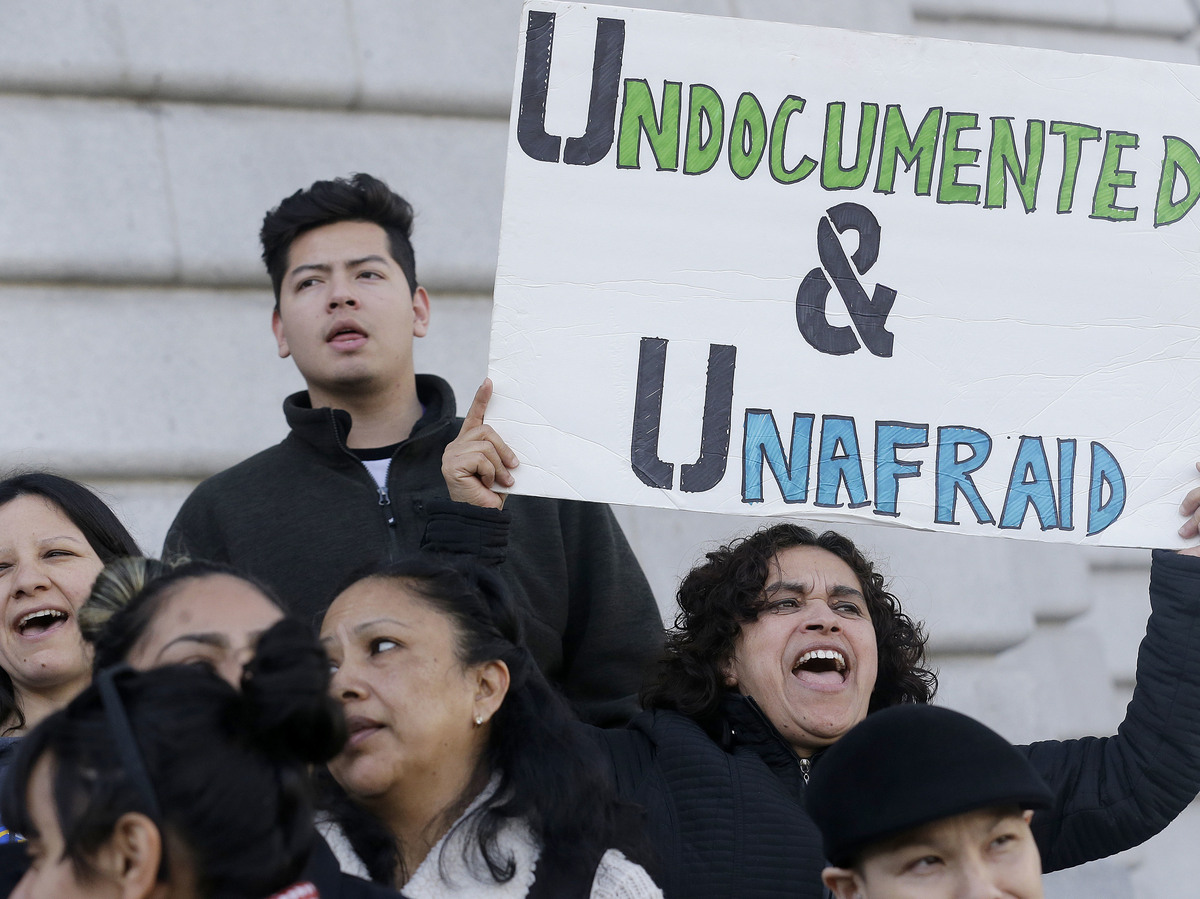 Lordes Reboyoso yells at a rally outside of City Hall in San Francisco to protest President Donald Trump's aggressive moves to tighten the nation's immigration controls. A new study showed that sanctuary cities like San Francisco are safer and have stronger economies.

In his continued efforts to address the number of undocumented immigrants in the country, President Trump took a harder line against cities and jurisdictions whose mayors have said they won't cooperate with his plans to enlist their police forces to help the federal government round up undocumented immigrants.

The president said that he will cut federal funding to the police budgets of so-called sanctuary cities — like New York, Chicago, and Washington, D.C — which could cost them billions of dollars. (Ahilan Arulanantham, a human rights attorney, told us on the Code Switch podcast this week that some big legal fights between those cities and the White House over whether the federal government has the authority to withhold that law enforcement funding are likely.)

But if threatening to cut off federal funding won't make sanctuary cities fall in line, the president is ready to try shaming them. According to one of the executive orders he signed on immigration enforcement this week, the White House intends to publicize when sanctuary cities do not comply by "[making] public a comprehensive list of criminal actions committed by aliens and any jurisdiction that ignored or otherwise failed to honor any detainers with respect to such aliens."

It's not clear yet exactly how the White House will publicize this catalog of crimes committed by immigrants.

But the available data on crime, immigration, and safety in cities does not support the premise for the president's actions. News outlets and researchers pointed out during the presidential campaign that immigrants who are in the country illegally are less likely to commit crimes or be incarcerated than the general population. The American Immigration Council noted in a 2015 study that the recent period of rising immigration to the United States from 1990 to 2013 also corresponded with plummeting crime rates across the country.

This past Thursday, a new study conducted Tom K. Wong, a political scientist at the University of California-San Diego, found that there are broad benefits for local jurisdictions that resist cooperating with federal immigration enforcement — they are safer in the aggregate and enjoy stronger economies. "For the first time we're kind of seeing that crime rates are lower when localities stay out of the business of federal immigration enforcement," Wong said.

He looked at federal data on immigration detainers, an ICE-initiated 48-hour hold on anyone identified as being in the country illegally. When someone is arrested and detained in a local jail, their fingerprints are cross-referenced with a federal database of undocumented immigrants. If the fingerprints match those of someone known to be in the country illegally, ICE can ask local law enforcement to hold that person as federal officials decide whether to start the deportation process. (There have been court battles over whether holding people for days without actual charges with these federal immigration detainer requests is in violation of the Constitution.)

Wong compared the the data from thousands of counties, those that ICE said did not honor detainer requests and those that did. "We don't have to make up a definition of what a sanctuary locality is," Wong said. "We have ICE telling us what it thinks a sanctuary county is."

On average, counties that did not comply with ICE requests experienced 35.5 fewer crimes per 10,000 people than those that did. Wong also found that counties that did not comply with detainer requests had higher household incomes, lower rates of unemployment, lower rates of poverty, and were less likely to have children under 18 in households receiving public benefits.

The crime numbers did not surprise Wong. Research has shown that working with federal immigration enforcement made it harder for local police agencies to investigate crimes because witnesses and victims who were in the country illegally would be less likely to come forward if they thought they risked being detained and deported. It could be that sanctuary counties have immigrant populations who are more integrated into their social fabric and economies, he said.

The research also revealed that smaller, more rural counties experienced the most significant impact from sanctuary policies on their crime rates (lower) and economies (stronger). Taken together, Wong said, the net benefits to sanctuary cities would offset the impact of Trump's shame offensive on them. "The ultimate effect is going to be minimal," he said.