Accessibility links
Black, Latino Two-Parent Families Have Half The Wealth Of White Single Parents : Code Switch New data illustrate how deeply entrenched the racial wealth gap is. The reasons traverse the historical and deliberate exclusion of people of color from economic institutions and government programs.

Black, Latino Two-Parent Families Have Half The Wealth Of White Single Parents

Black, Latino Two-Parent Families Have Half The Wealth Of White Single Parents 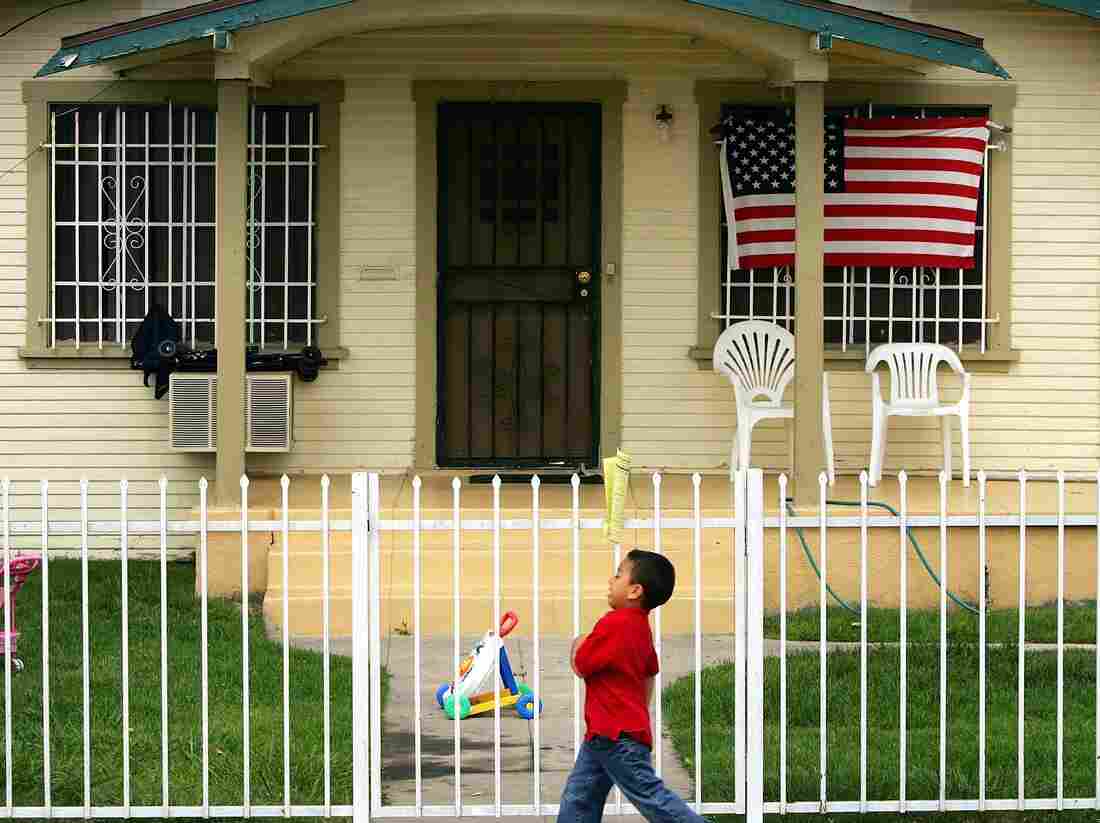 A study by the think tank Demos finds that black and Latino families with two parents still own only half as much as wealth as white single parents. David McNew/Getty Images hide caption 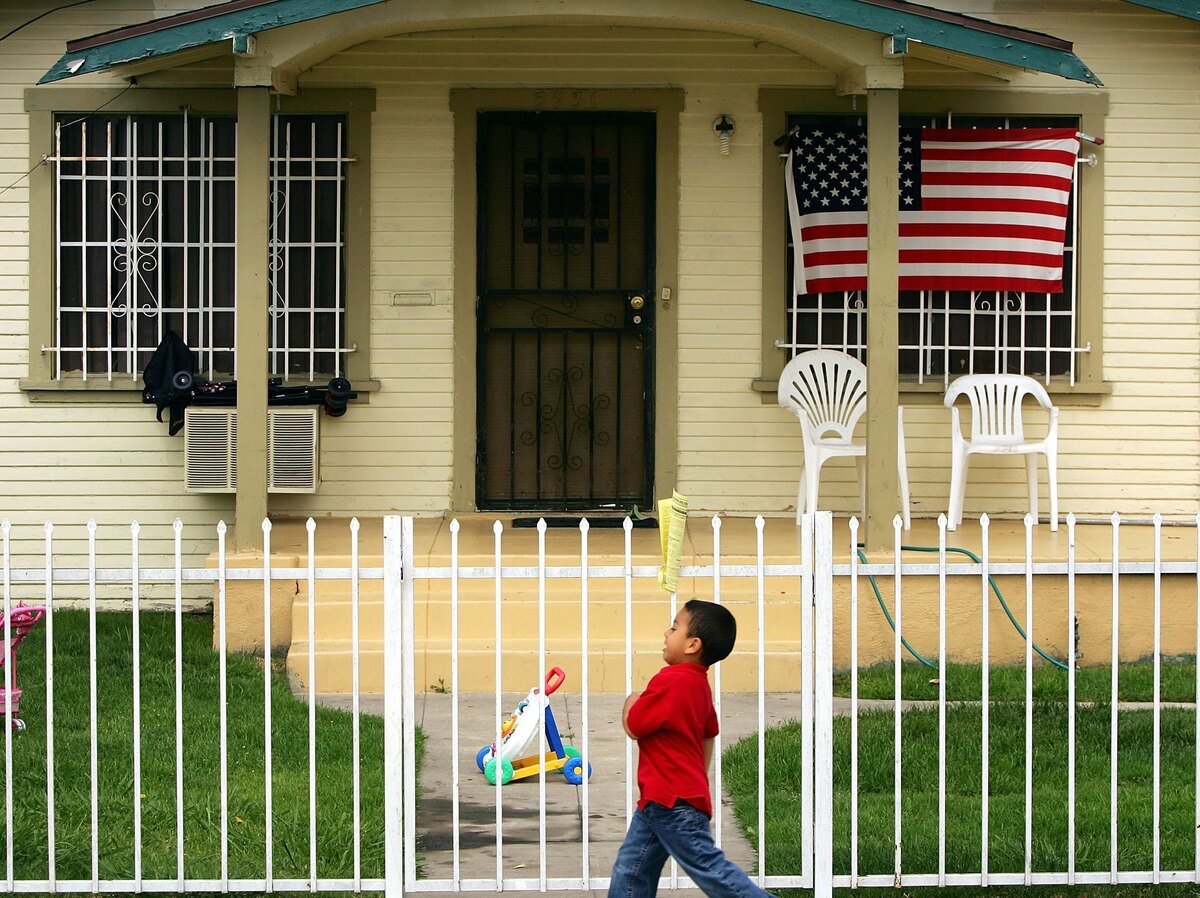 A study by the think tank Demos finds that black and Latino families with two parents still own only half as much as wealth as white single parents.

The racial wealth gap has been measured and studied for decades. One fact has remained the same: White families build and accumulate more wealth more quickly than black and brown families do.

The reasons for this are multiple and well-documented. They start at slavery and traverse the historical and deliberate exclusion of people of color from the economic institutions and government programs that helped white Americans build wealth and pass it on to successive generations. Segregation and redlining by banks made it impossible for many black and Latino families to secure mortgages, for example. The GI Bill, which helped establish an American middle class by helping veterans pay for college and buy homes after World War II, mostly excluded people of color.

The results are stark.

A study released this week by the liberal-leaning think tank Demos offered new points of analysis on the disparity, one of which was particularly sobering. In comparing the wealth held by single-parent white families to that held by black and Latino families with two parents, the authors found that: 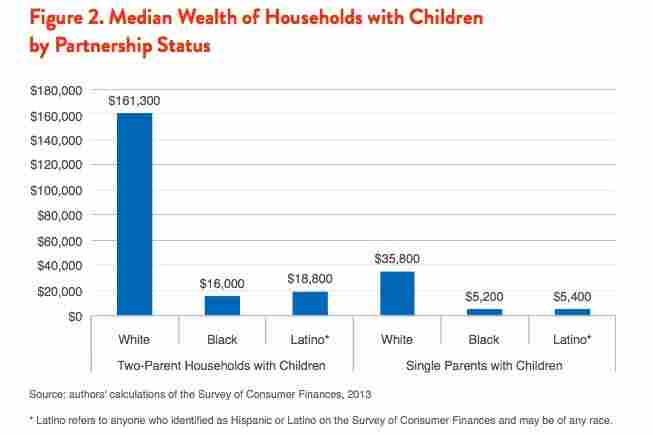 Black and Latino two-parent families still have half the wealth of white families with just one parent. Demos.org hide caption

The median single-parent white family had roughly twice as much wealth as the median black or Latino family with two parents. This ratio is interesting for a couple of related reasons.

First, it demonstrates that the financial advantages that come with marriage, like having two earners, qualifying for tax breaks for dependents, and the ability to share expenses, are insufficient to close the racial wealth gap.

Second, as the study points out, the data call to mind Daniel Patrick Moynihan's controversial 1965 report "The Negro Family." In it, he attributed poverty among African-Americans to the structure of black families and the fact that many were headed by single mothers. Moynihan argued that the widening gap between black Americans and white Americans would persist so long as "the deterioration of the Negro family" did.

This premise has often been used to advance the argument that personal responsibility and social respectability are the solution to racial and economic inequity (see: Bill Cosby, et al.). Yet decades of research have demonstrated that this is a faulty premise and cannot explain away the racial wealth gap. The Demos study reiterates this point.

"Family structure does not drive racial inequity, and racial inequity persists regardless of family structure," the authors note. "The benefits of intergenerational wealth transfers and other aspects of white privilege ... benefit white single mothers, enabling them to build significantly more wealth than married parents of color."

The study uses available data to illustrate other ways that have proved inadequate to close the racial wealth gap. Attending college, working full time, spending less than whites — none of these have been enough to help black and Latinos even begin to achieve parity with white Americans in this regard.