Accessibility links
Most Latino Films Still In No-Man's Land Despite Growing Audience : Code Switch "This is a group — a population — that supports and consumes the most entertainment. But yet they have no representation, almost. I mean, we have Jane the Virgin, but where are the movies?" 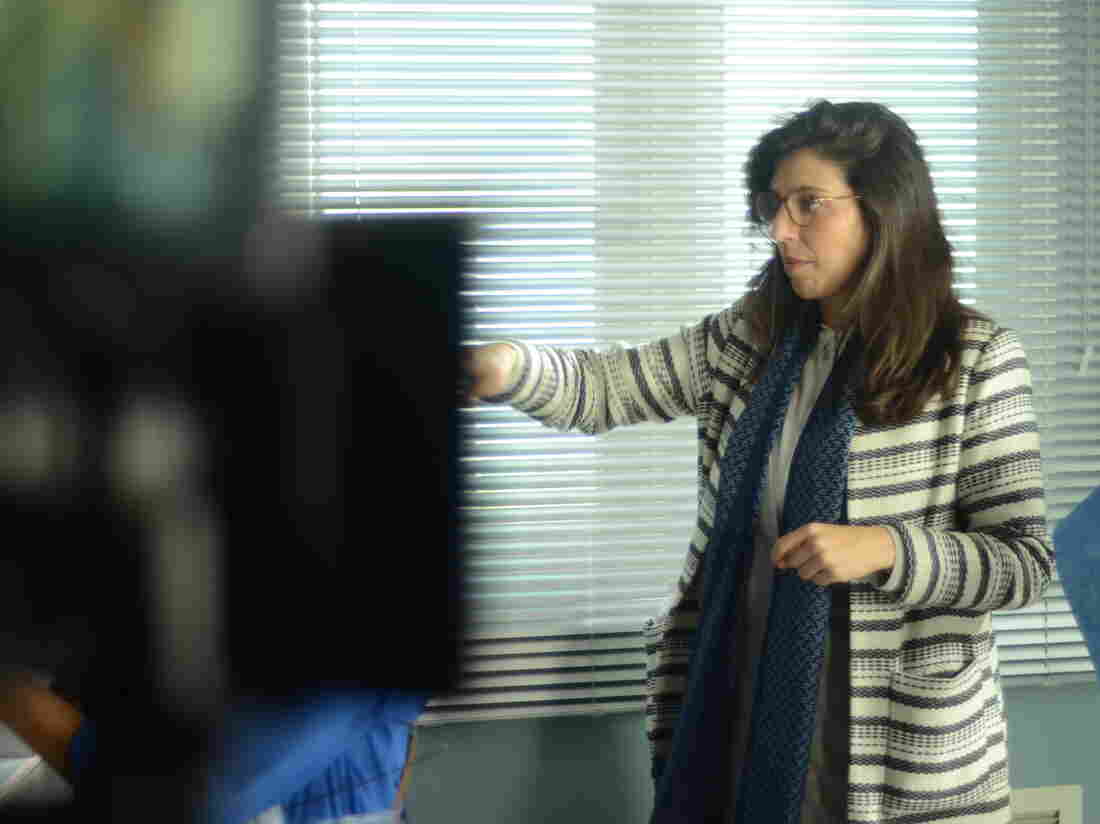 Director Catalina Aguilar Mastretta behind the scenes of "Everybody Loves Somebody." Pantelion Films hide caption 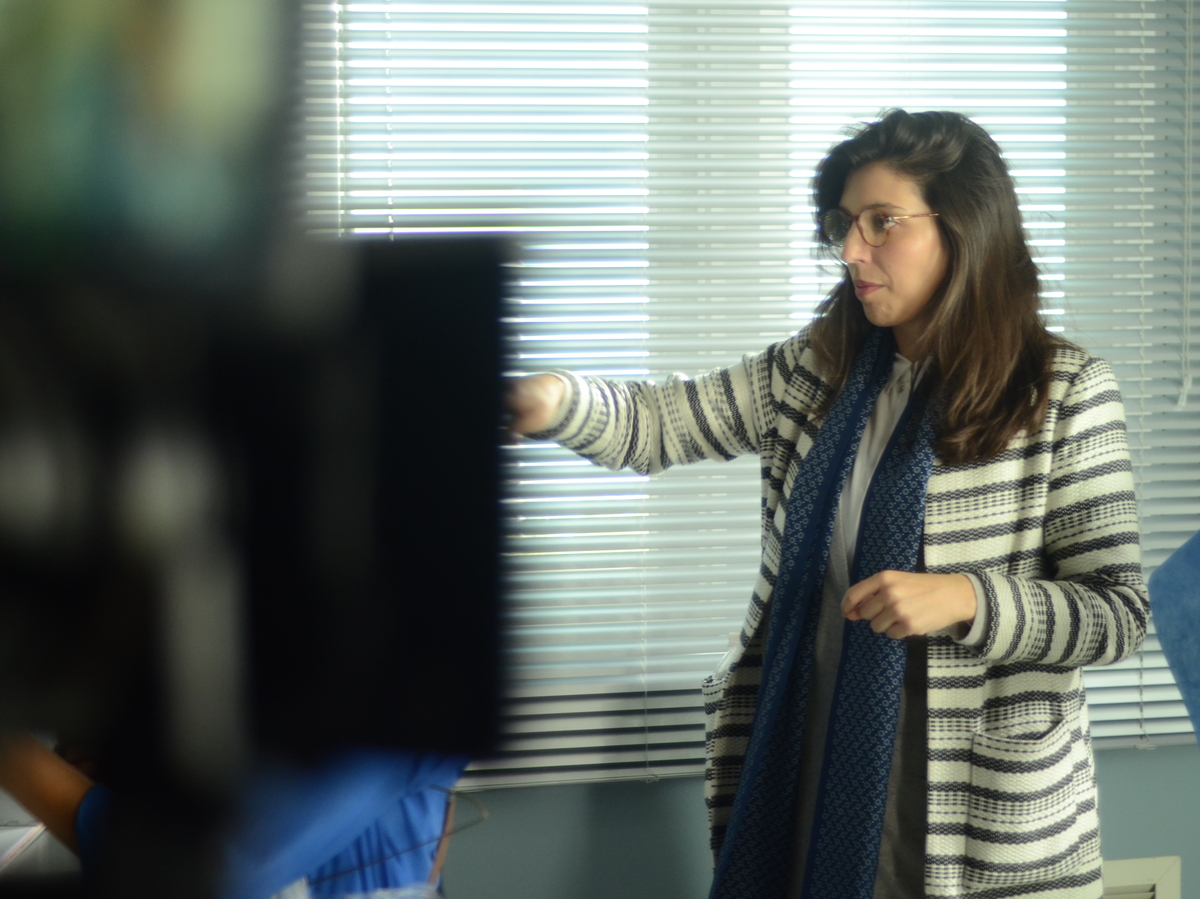 Director Catalina Aguilar Mastretta behind the scenes of "Everybody Loves Somebody."

On the surface, Everybody Loves Somebody looks like a lot of romantic comedies that have come before it. But Catalina Aguilar Mastretta's second film, which stars How to Get Away with Murder's Karla Souza as a California ob-gyn with family in Mexico who's unlucky in love, is a rare find in American multiplexes. It is a truly bilingual and bicultural film. Its characters code switch easily between English and Spanish, and lead lives that straddle the American border with Mexico. At a time when U.S. Latinos on television appear on shows like Jane the Virgin, East Los High and One Day at a Time, the dearth of similarly-themed full-length films has created a cultural void.

Oscars So Black...At Least, In Documentaries

This lack of big-screen representation is all the more puzzling given that for the past two decades U.S. Latinos have been the ones keeping the movie-going experience alive. In what's become an annual refrain, theater attendance reports confirm that Latinos boost box office numbers across the board. At 2016's CinemaCon, John Fithian, president and CEO of the National Association of Theatre Owners, said that "diverse audiences around the globe are making their voices heard," while "in the U.S., Hispanics have the highest rate of cinema visits."

For the fifth year in a row, Latinos "significantly oversampl[ed] in tickets sold relative to their shares of the population," as reported by Theatrical Market Statistics. That they were mostly spending money on Hollywood blockbusters like Furious 7 (whose box office success was in no small part due to its Hispanic audience) suggests that there's a generation of moviegoers, what Univision calls "the billennial generation" (bilingual millennials), that remains an untapped market.

Previous attempts at reaching them have been lackluster at best.

Director Robert Rodriguez's success in the 90s with El Mariachi and From Dusk Till Dawn, and the crossover arthouse appeal of Alejandro González Iñárritu's multicultural triptych Babel in 2006, provide examples of how studios have tried to represent and target acculturated U.S. Latino audiences. Rodriguez's El Mariachi, for example, holds the distinction as the lowest-budgeted film ever to gross $1 million at the box office. Made for a mere $7,000 and originally intended as a straight-to-video release, it was eventually picked up by Columbia Pictures who saw the potential in this Spanish-language genre flick. Likewise, González Iñárritu's Oscar-winning film spent over 22 weeks in theaters. Praised by critics and audiences alike, ushered in a short-lived period of a very specific type of transnational filmmaking. Alfonso Cuarón's Children of Men and Guillermo del Toro's Pan's Labyrinth — both released that same year — also fit in that class.

But the best proof that a sizable chunk of the American film audience was being underserved is the record-breaking No se aceptan devoluciones (Instructions Not Included) by Eugenio Derbez. Released by Pantelion Films, the company distributing Everybody Loves Somebody, and featuring a bilingual and bicultural heartwarming tale of a single dad, the 2013 film became the highest grossing Spanish-language film of all time in the U.S. It was a box office story that, if you read the English-language press, came out of nowhere. 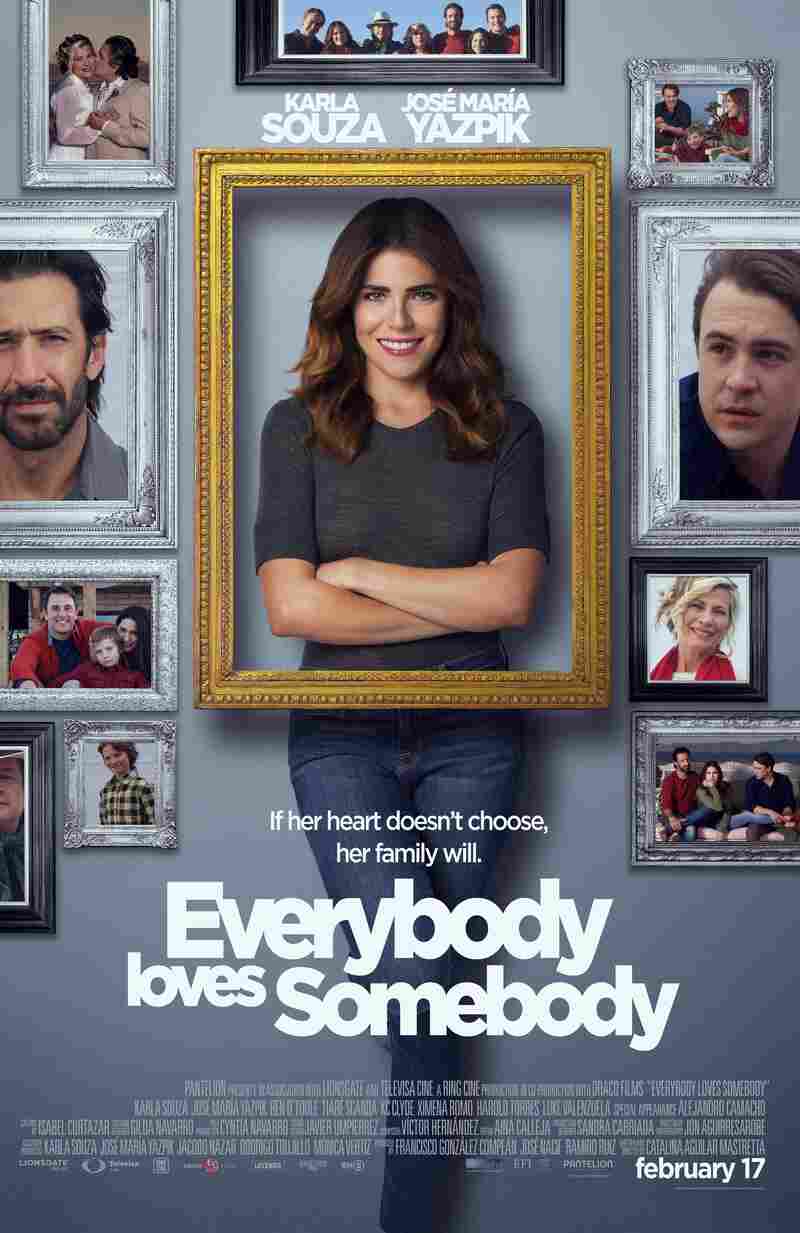 "Everybody Loves Somebody," a new bilingual comedy about work, love and family, is set to release on February 17. Pantelion Films hide caption

Entertainment Weekly said the film "stunned Hollywood with its muy bien $10.4 million debut from only 347 theaters." Carlos Gutierrez, the co-founder and executive director of Cinema Tropical, a non-profit media arts organization dedicated to promoting Latin American cinema in the United States, said Derbez "was basically the one who found the holy grail of Latino audiences in the U.S.," and who gave Pantelion (a partnership between Lionsgate and Mexican media powerhouse Televisa) the key to their current standing in the industry.

While the staggering success of Instructions Not Included has yet to be replicated, Pantelion has been making modest hits out of mostly mainstream Mexican films. "Our mission statement is to provide quality movies for the Latino audience in the United States, movies and stories that speak to them," said Edward Allen, the company's chief operating officer. "Most of what we've been doing is in Spanish, but we are very aware and appreciate the fact that it's not a homogenous group and we just need to be very smart about what projects we pick and how we market those projects."

The gamble on a project like Everybody Loves Somebody was not lost on its director, whose past credits include directing the Mexican-set Las horas contigo and writing the LA-themed Echo Park. The film's bilingual nature both excited the producers and made them a little nervous. "Either we're doubling our audience and making a movie for everyone," Aguilar Mastretta pondered. "Or we're alienating everyone. That remains to be seen."

Films that speak to a Latino bicultural sensibility, as Remezcla film editor Vanessa Erazo notes, are pretty rare. Much like Bollywood films targeting the Indian-American population, they remain successful as niche endeavors in the eyes of the broader film market. In fact, despite co-founding Cinelandia, which keeps track of U.S. Latino films and Latin American movies in the U.S. market, Erazo was hard-pressed to name a recent film made by and for such a bicultural experience. (Aguilar Mastretta's film, like Derbez's 2013 hit, was produced in Mexico.) There have been no crossover hits lately in the vein of 1987's Born in East L.A., 1997's Selena or even 2006's Quinceañera.

Tanya Saracho, whose Off-Broadway play Fade about a Mexican TV writer working in Los Angeles deals with the trouble of getting authentic media images of U.S. Latinos on screen, is baffled by the lack of representation. "This is a group — a population — that supports and consumes the most entertainment. But yet they have no representation, almost. I mean, we have Jane the Virgin, but where are the movies?"

The crux of the problem is that U.S. distributors don't know how to market films that are in Spanish and/or bicultural without pigeonholing them as foreign films, or reducing them to heavy-handed identity films.

It's a problem Rodrigo Brandão, who manages the distributor Cinema Slate which focuses mostly on arthouse films from Latin America, knows all too well. The American market, he points out, remains allergic to subtitled-fare. This makes films that straddle those lines hard to pitch, as they inhabit a no-man's land between Latin American arthouse fare and Hollywood multiplex hits. And so while Pantelion has come in to fill the gap in the market that treats Spanish-language and bicultural films as mainstream products, they've opted to focus on films with broad appeal that are produced south of the border. It's no surprise some films, like last year's hit No Manches Frida (which made over $11 million dollars in about three months without reaching 500 screens around the country) were also runaway hits at the Mexican box office.

If Everybody Loves Somebody is to serve as (yet another) canary in the coal mine for whether American moviegoers will respond to bilingual and bicultural entertainment on the big screen, it is only because such projects seldom get produced, much less distributed, in major markets around the country. Latinx filmmakers in the U.S. remain mostly absent, their projects often relegated to the film festival circuit or VOD releases where their breakout potential is severely undercut.

But there are signs that there may finally be enough industry players willing to compete and complement the work that Pantelion is doing. NBCU Telemundo Enterprises is launching Telemundo Films to produce and distribute content aimed at the U.S. Latino market. Modern Family star Sofia Vergara will launch Raze, a digital media company focused on telling Latino-centered stories. But until they begin championing U.S. Latino talents up and down the film industry ranks, and putting more stories front and center, the promise of truly bicultural entertainment will remain a deferred one.