Accessibility links
Seminole Patchwork: Admiration And Appropriation : Code Switch Native American symbols have long caught the eye of non-Native fashion designers. But when it comes to Seminole patchwork designs, where is the line between inspiration and appropriation? 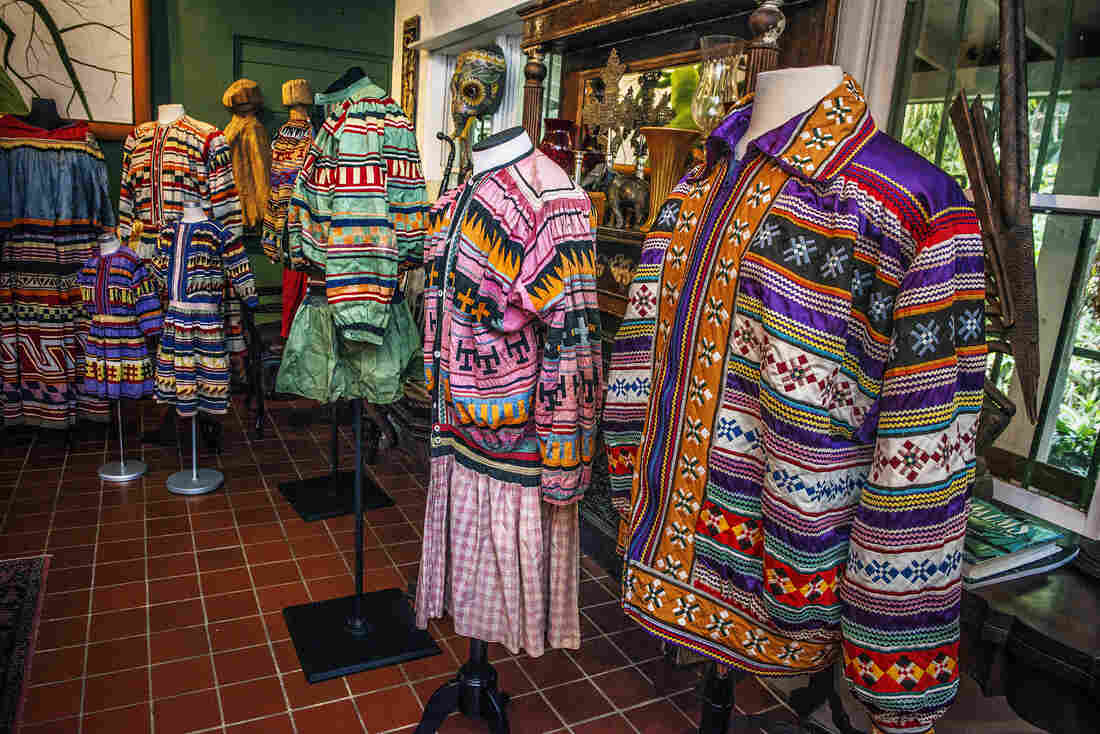 Vintage Seminole patchwork on display at the home of Patsy West, in Fort Lauderdale, Fla. Courtesy of Will O'Leary hide caption

toggle caption
Courtesy of Will O'Leary 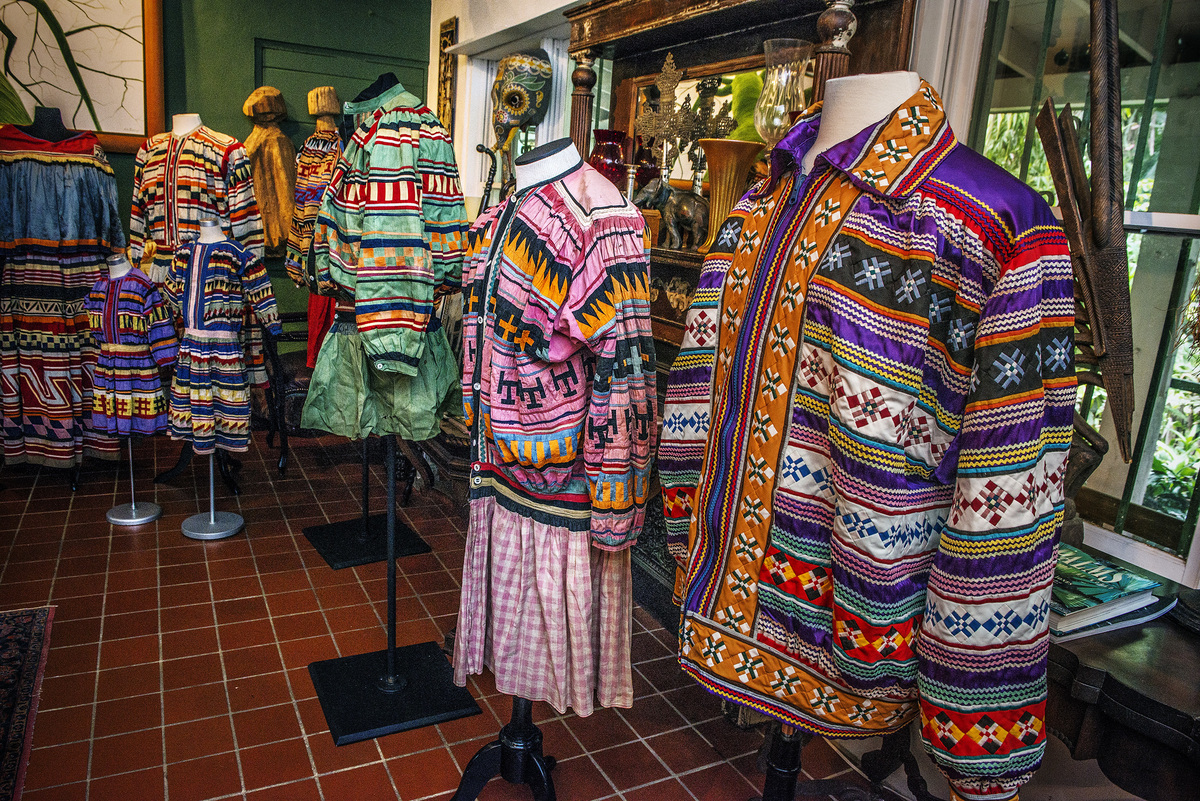 Vintage Seminole patchwork on display at the home of Patsy West, in Fort Lauderdale, Fla.

Courtesy of Will O'Leary

Beginning Friday, the New York branch of the Smithsonian's National Museum of the American Indian will host the exhibit Native Fashion Now, a traveling show from the Peabody-Essex Museum in Salem, Mass. It highlights a dazzling array of contemporary fashion made by dozens of Native American designers. 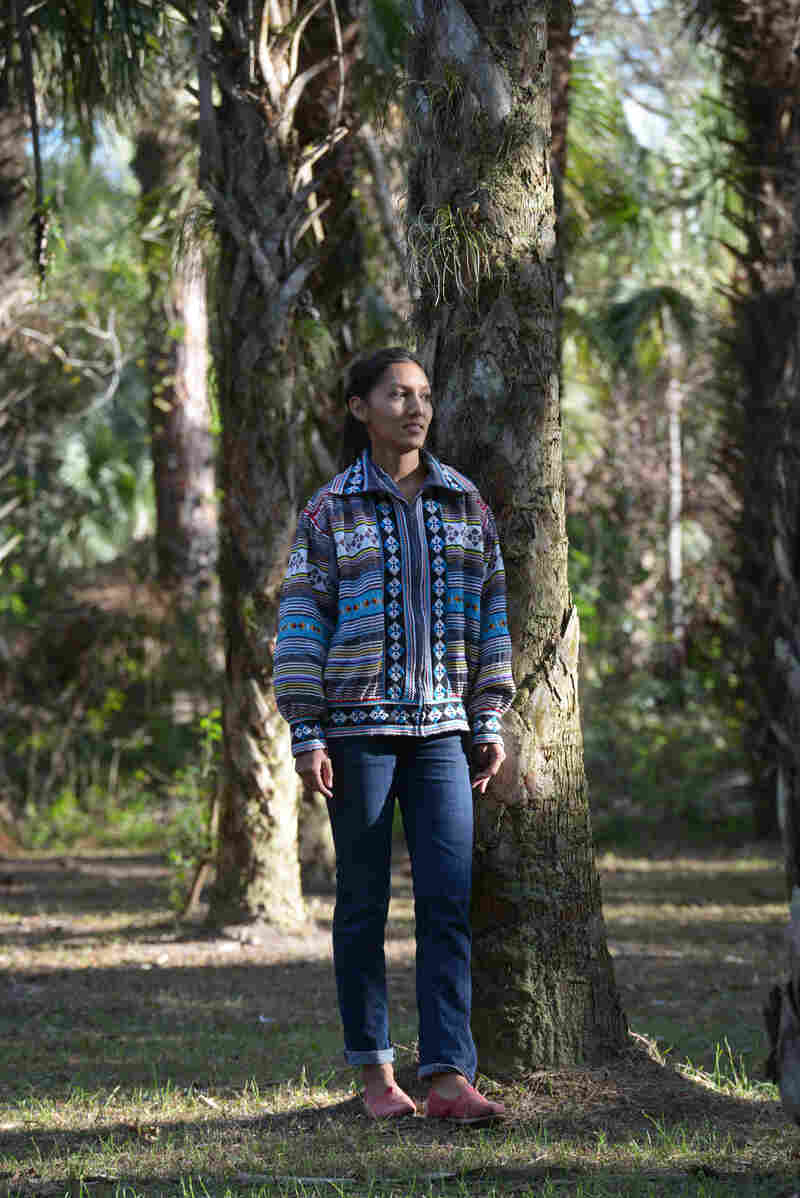 toggle caption
Courtesy of Will O'Leary 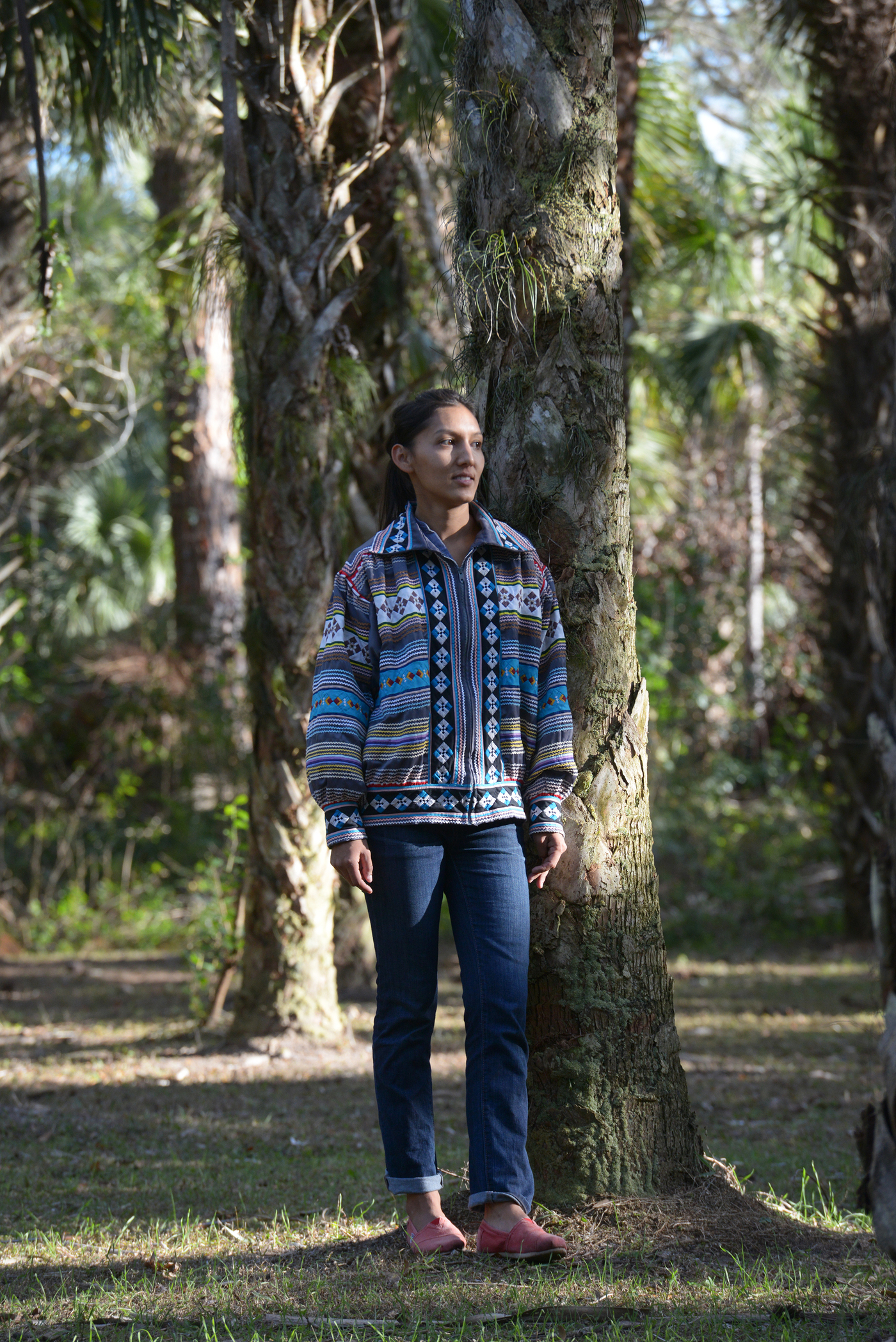 Courtesy of Will O'Leary

Native American symbols have long caught the eye of non-Native designers, who are inspired by the bold graphics of artisanal Native American patterns. Imitation and inspiration, though, raise the question of how to credit the source — and whose work is being represented. In Florida, one group of young Seminole seamstresses confronted one of the biggest names in fashion: Donna Karan.

Jessica Osceola is a direct descendant of the 19th century Seminole leader, Osceola, an activist, college professor and artist.

Her sculpture is striking and unabashed: A pair of legs and feet, the skin a patchwork of red hues, stuffed head first into a Donna Karan shopping bag. It's a ceramic piece. Osceola called the piece "Not Yours, Not Ours, Not For Sale." She made the piece after becoming frustrated by designers who copied or interpreted Seminole Indian patchwork without acknowledging the source of inspiration — Donna Karan in particular.

"Patchwork has become a really recognizable art form ... lately there's been a lot of exploitation of it. Other people making these very specific designs... and constructing it — and I wanted to be a part of the movement showing people that it is part of our identity... that we remain strong, that and it's a thing that's happening now."

Osceola, a tribal citizen who lives in Naples, Fla., learned to make Seminole patchwork by watching her grandmother, who lived on Florida's Tamiami Trail. The textile art form is handmade, worked into patterns by weaving strips of contrasting colored fabrics. Finished pieces are extremely imaginative, with undulating horizontal bands of color that give them a bold, pop-art look, and often a border trimming called "rickrack." 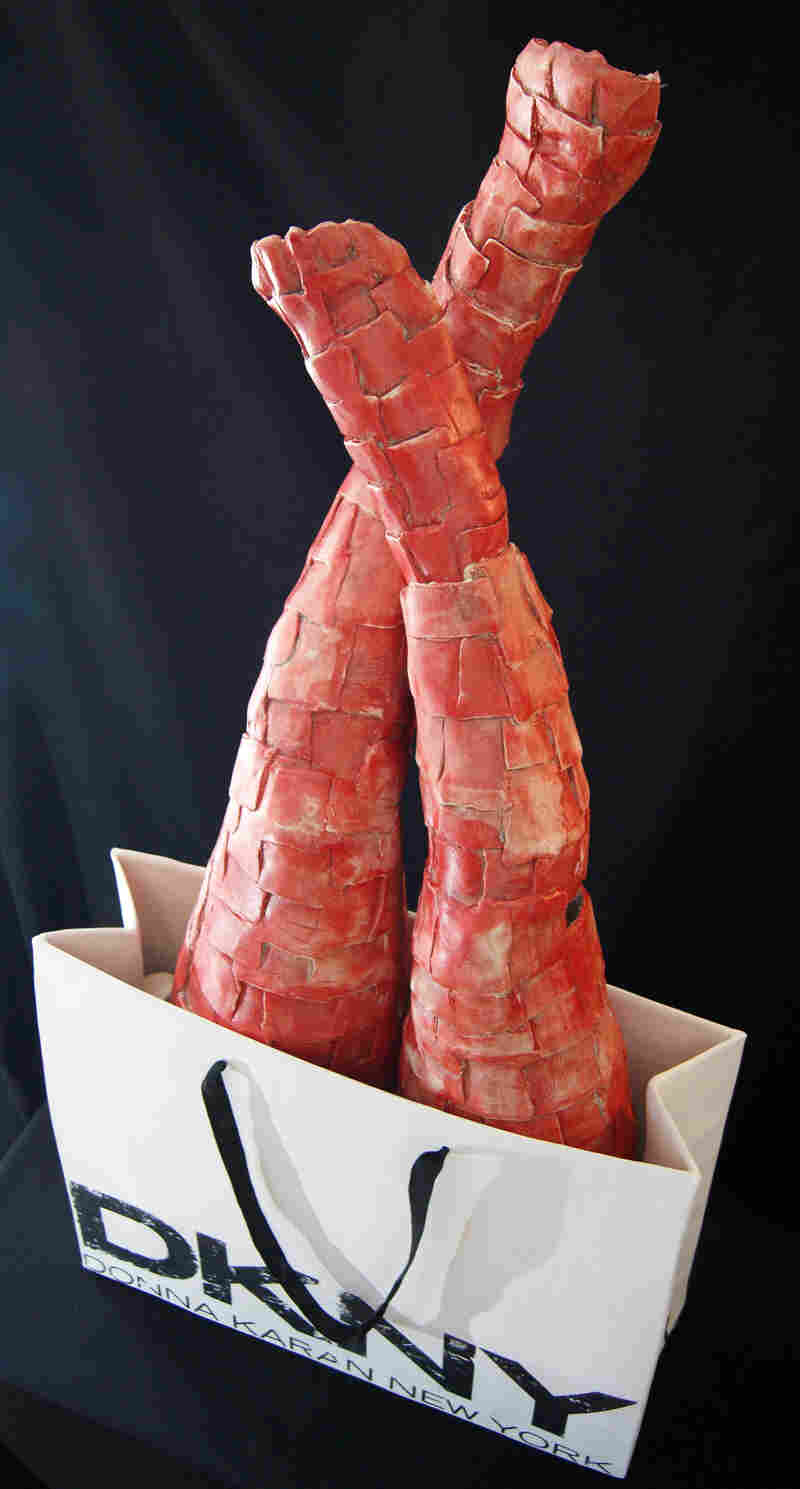 Jessica Osceola's sculpture titled, "Not Yours, Not Ours, Not For Sale." Courtesy of Jessica hide caption

Designers like Donna Karan and Chanel, and clothing chains like Anthropologie and Free People have used interpretations of Seminole designs in their collections. None has given credit to the Seminoles. After Osceola complained, she did get apologies from the chain stores.

So far, Donna Karen has not yet responded to a 2012 letter from Osceola and several others. They signed themselves "Seminoles4Authenticity."

"I am saddened that such a well-known artist like Donna Karan would steal from the grandmothers, aunts and daughters of the Florida tribal people," Osceola wrote.

"Donna Karan specifically had some patchwork designs... set up just the way a ¾ Miccosukee or Seminole skirt would be... with a diamond pattern and rickrack, and her artist statement said that it was her own creative concept.... So, when I tried to confront here, as well as my cousins, we didn't get any answers from her."

Osceola says "Seminoles4Authenticity" was asking Karan to acknowledge Native, and specifically Seminole, contributions to her label's designs. Karan's representatives were unable to make her available to comment for this story.

The Donna Karan skirt is muted brown and black. There's nothing illegal about using designs like these as long as they're not labeled as being made by Seminoles. (Patterns on clothing can be copyrighted but traditional Native American designs like Seminole patchwork frequently don't qualify for copyright protection because they are the collective work of a community of creators that has evolved over generations.)

Designers borrow from each other all the time. In fact, designs have spread from one Native American tribe to the other. The Seminoles may have even gotten some of their original inspiration for capes and skirts from European styles. And Seminole designs became more elaborate with the advent of the sewing machine at the beginning 20th century. Author, historian and archivist Patsy West is an expert on Seminole history.

"The Seminoles were very terrifically innovative (with cloth). And with the sewing machines that were purchased from Stranahan's trading post here in Fort Lauderdale, or from Brickells in Miami and from my great-grandfather's William Freeman trading post here on Little River — they started making their same pattern but with little twists. And every time they put in a little extra something, we ended up with patchwork."

The designs became known as "fire," "rain," "mountain," and so on. Tourists enthusiastically bought Seminole patchwork clothing on trips to Florida. Then, a missionary named Deaconess Bedell, in Everglades City, took Seminole and Miccosukee clothing up to New York to sell in the 1930s. They caught on. Native American patterns have always had appeal.

South Florida's Seminole Cowboys: Cattle Is 'In Our DNA'

In recent years, designers from Isaac Mizrahi to Jeremy Scott have gotten in trouble for appropriation of symbols like totem poles. Donna Karan herself, however, has won praise for collaborating with a Native artist, Virgil Ortiz, from the Cochiti Pueblo in New Mexico. A decade later, Donna Karan acknowledged Haitian artisans, where she's worked extensively with local people. In a 2012 clip in an interview on YouTube, Karan tells Neiman Marcus creative director Ken Downing that she wants to pay homage to those who are her catalysts.

"If I couldn't do that, I don't think I'd design," Karan says in the interview. "I don't just think about designing. I hope that I inspire other people. I hope I inspire people to think about design not just as a business, but as somebody's heart and soul."

And, as cultural heritage.

Kathleen Ash-Milby is a curator at the New York branch of the Smithsonian National Museum of the American Indian, and a Navajo tribal member. 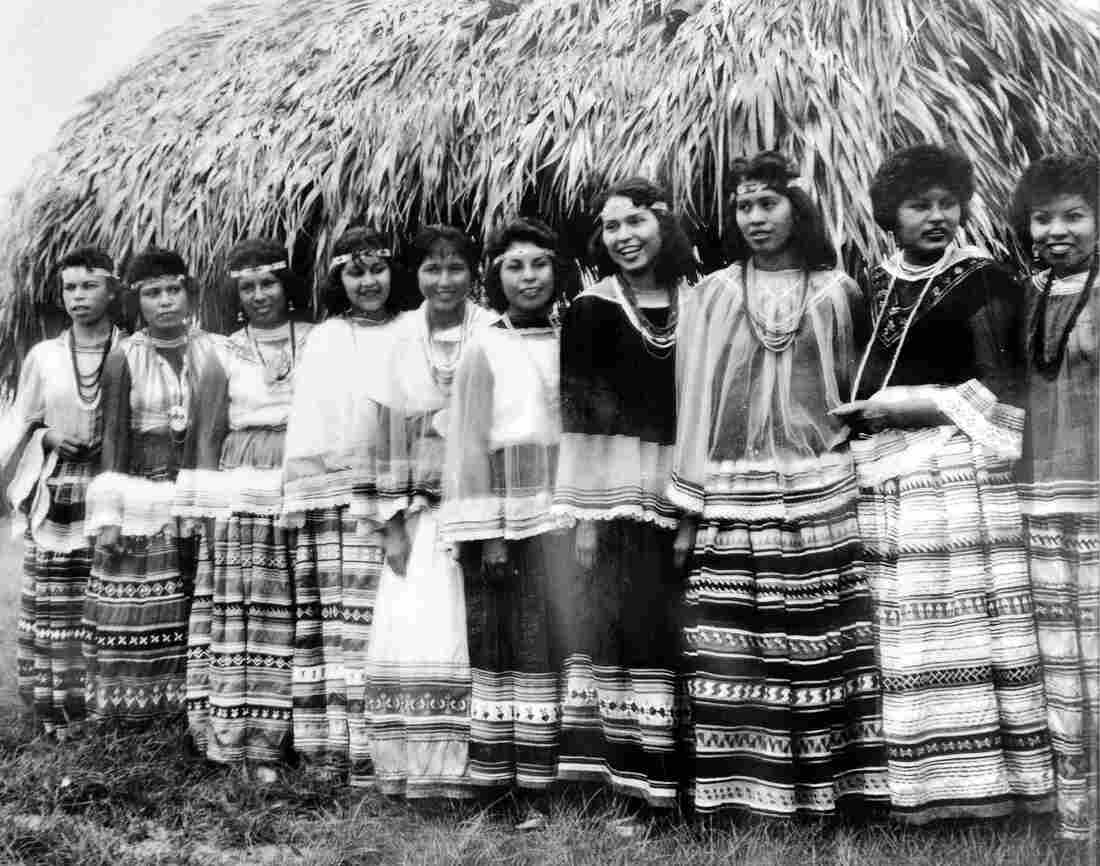 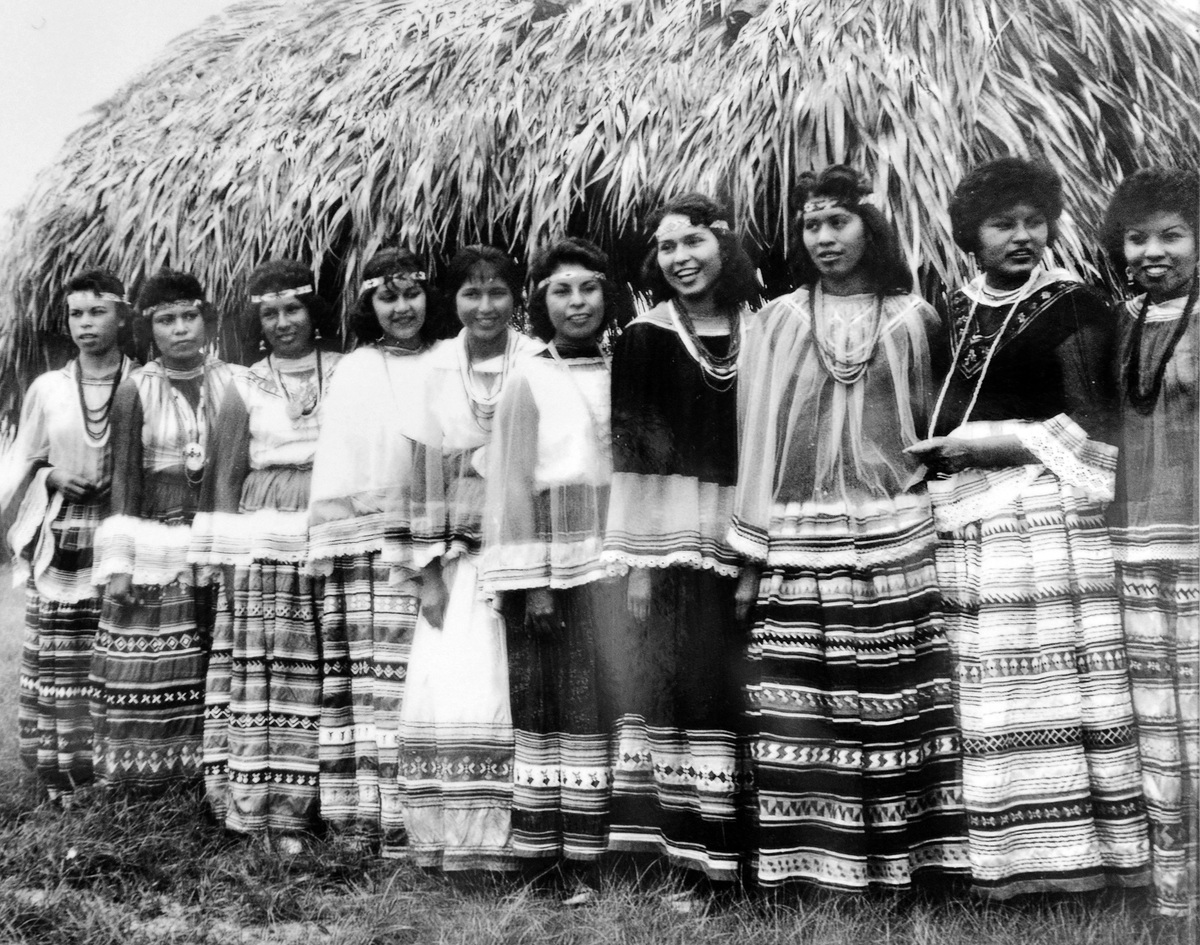 "As far as drawing inspiration, I don't think we can say that anything is wrong about being inspired by Native art and expression. I think the issue is when things are copied to such a degree that it is very very apparent that this is not [the designer's] idea. It still has a very strong association with a community which is the originator, and that should be acknowledged."

It works best, says Ash-Milby, when designers and artisans can be introduced ahead of a project. Giving "credit" can mean anything from naming a tribe to paying for work or a share of the profits.

In Florida, Jessica Osceola agreed recently to collaborate with a San Francisco company on a line of children's clothes, which approached her through the tribe's Ah-Tah-Thi-Ki Museum on the Big Cypress Reservation in Clewiston, Fla.

As far as Karan, Osceola says, "I can't beat her... but what I can do is plant a seed... and just try to foster that seed... so for me, a little bit of recognition, with me, goes a long way. I just wanted them to say, 'Seminole-inspired.'"

Later in the spring, the curators of the New York branch of the Smithsonian's National Museum of the American Indian will tackle appropriation head-on with tribal designers from around the country in a symposium with the Fashion Institute of Technology in New York, on April 22. And Donna Karan has been invited to be a speaker.

This story was produced with support from the Florida Humanities Council.