Accessibility links
Today's Feminism: Too Much Marketing, Not Enough Reality : Code Switch It seems that "feminism" in 2017 is more concerned with promoting superficial trappings of genuine equality than with doing the tough work to address the hard facts of gender and racial inequality.

Today's Feminism: Too Much Marketing, Not Enough Reality

Today's Feminism: Too Much Marketing, Not Enough Reality 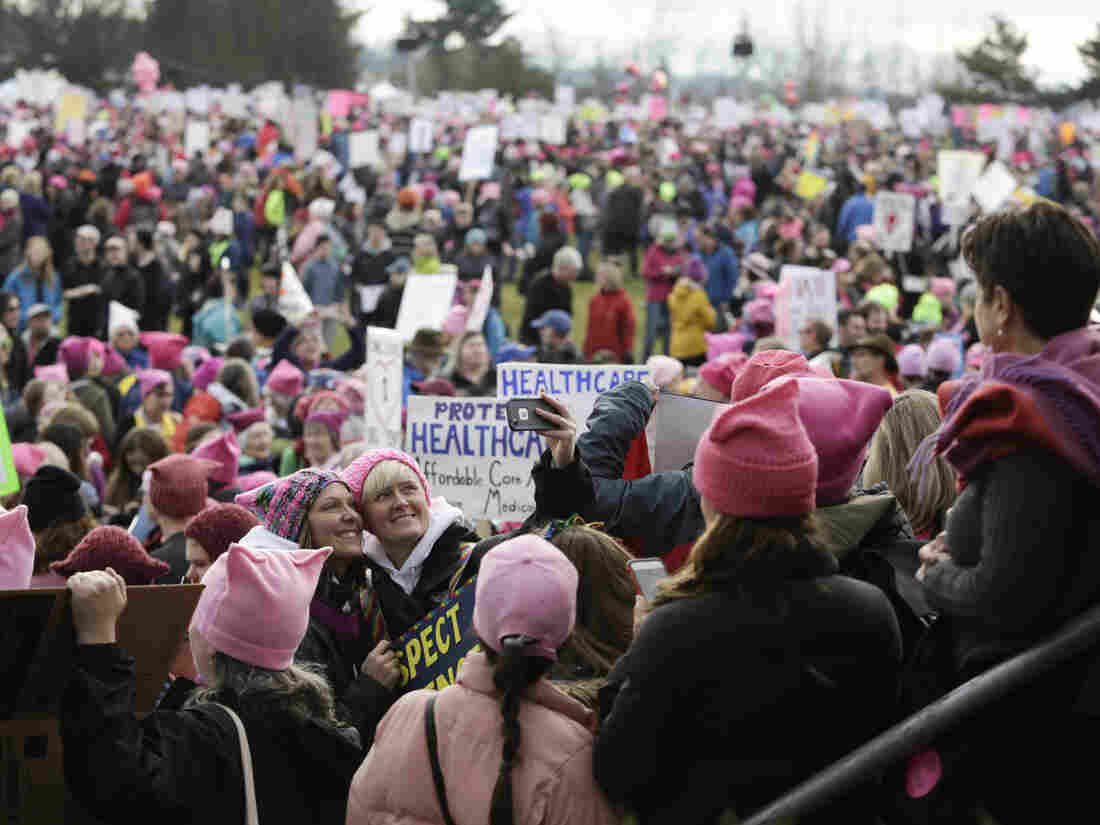 Led by women in pink "pussy hats," hundreds of thousands of people packed the streets of Washington and other cities in a massive outpouring of opposition to America's new president, Donald Trump. Jason Redmond/AFP/Getty Images hide caption 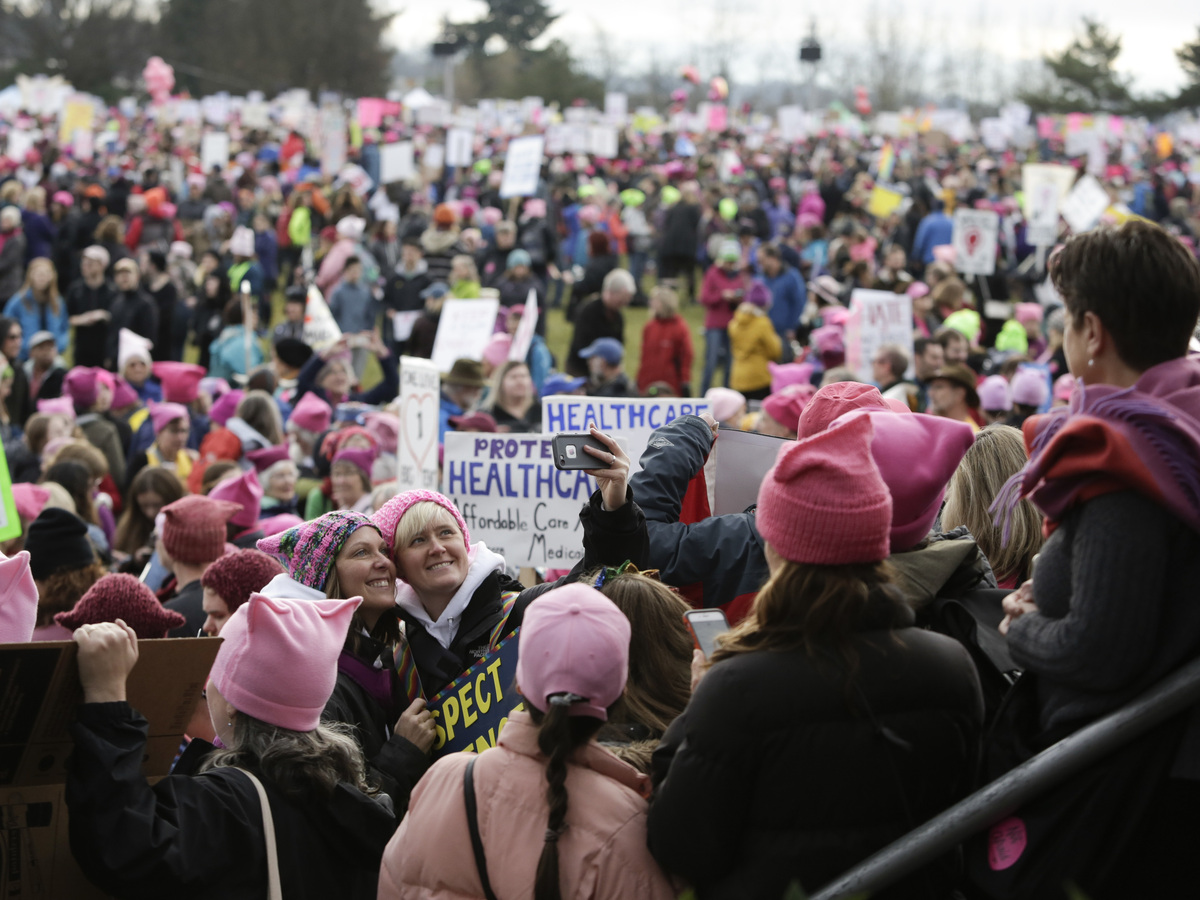 Led by women in pink "pussy hats," hundreds of thousands of people packed the streets of Washington and other cities in a massive outpouring of opposition to America's new president, Donald Trump.

I'm a black woman of a certain age, a divorced mom of two teenagers who has no choice but to focus daily on the challenges of keeping a home, my family and myself on track. I'm college educated, work in media communications, am precariously middle class — and I am tired of what I witness of today's feminism.

I'd hoped that the Women's March might help me update my perception of feminism, at least as it is commonly portrayed and disseminated of late.

I'd followed the back and forth in the alternative and mainstream press during its hurried, urgent formation, and chalked up reports about internal squabbles over the race and class makeup of the group's leadership to the same kind of growing pains that beset every activist group that I've ever followed or covered during my years in newsrooms. But now, a month after the Women's March masterfully pulled off a massive protest in D.C. that also inspired similar ones in major American and global cities, my nascent investigation of the March 8 "general strike" and "Day Without Women" raised only more concerns, and a few questions, all located in what I see as a big void in today's marketing-driven expression of "feminism."

At this moment, whether expressed by the second-wave, Gloria Steinem wing, or the third-wave corporatist Sheryl Sandberg arm, or the rowdy, genitalia-obsessed Lena Dunham arm, it seems that "feminism" in 2017 is more concerned with promoting superficial trappings of genuine equality than with doing the tough work required to address the hard, cold facts of gender and racial inequality.

For example, across all U.S. occupations, women's median weekly earnings are $706 per week, compared with $860 for men, and the top 30 occupations for women cover a range of essential — but relatively low-paying — jobs such as elementary school teachers, administrative assistants, customer service representatives and retail sales, according to the most recent data available (2013) from the United States Bureau of Labor Statistics Women's Bureau. And, while black and Latina women together make up nearly 18 million of the total number of America's 67 million working women, they are disproportionately more likely to be heads of households, yet also more likely to receive less pay than white women and white men.

Moreover, in addition to stubborn disparities in the workforce and incomes, women of color see huge gaps between themselves and white men and women in health outcomes and other key life-expectancy indicators.

The Women's March, while apparently "led" by a diverse collection of black, white, Latina and Asian women from across age groups, is the latest entry in a recent bumper crop of "feminist movements," "collectives," "initiatives" that claim inclusivity and egalitarian principles, but which somehow always seem tone-deaf, at best, to the daily, on-the-ground realities of nonfamous black women and Latinas.

How, then, will working-class black women and Latinas respond to the idea of missing a day of work in a general strike as part of political resistance? It is a case of high-minded ideology that, while well-meaning, doesn't take into account the fact that some women can't miss even a single day of work without fear of being fired or docked a full day's pay. Consider that the "Day Without Immigrants," on Feb. 16 — organized by disparate workers' and immigrant rights organizations in response to President Trump's proposal to build a wall between the U.S. and Mexico, and to impose a strict immigration ban on seven Middle Eastern nations — resulted in private companies in several cities firing dozens of workers who participated in the boycott.

While the symbolism of the "Day Without Immigrants" is certainly valuable, for the immigrant and women workers who got fired for participating, and who now must find new jobs, you have to wonder if they now genuinely believe they received appropriate return on their investment. I have similar concerns about the upcoming "Day Without Women." As Jessa Crispin noted in a recent essay, "the pro-woman power elite peers deeply into the savage inequalities of American life and asks, 'Where's my half of the profits?' "

Akin to the debate over white privilege, the debate over feminism is similarly stuck in a binary construct, largely defined in middle- or upper-middle-class white-lady contexts. Variations exist along generational lines: See the Lena Dunham crowd contrasted against the Steinem wing. But the marketing of modern feminism, and the oxygen-sucking place it holds in the public imagination, is largely occupied by white women.

The occasional invocation of Audre Lorde, Fannie Lou Hamer or Angela Davis by some leaders within these status quo or emerging white feminist camps in 2017 is notable — if also to me superficial and insufficient. (Yes, I know Davis is among a group of women who are advocating for a general strike.)

Today's purveyors of hashtag feminism exemplified by pink "pussy hats," safety pins and cheeky-ballsy slogans on T-shirts have forgotten that women of color have to learn how to navigate their own universes but also those of white women and men to literally be able to pay the rent and afford decent schools. We have to succeed in both spheres not only to achieve success, but to fundamentally cope. To ask us, then, to participate in a Lysistrata-like action makes me wonder if the gesture is designed more to give white ladies another opportunity for displaying unity, a kind of safari solidarity, than it is to provide women of color and working-class women tangible relief.

However out of fashion it is to say so in the wake of the 2016 presidential election, identity politics are inherently personal. Identity politics do, in fact, drive political outcomes, which in turn drive policy, economic and social developments.

I don't now and never have viewed the conventional version of feminism as a defining part of my identity; rather, based on what I have experienced and learned from the black women I've known my entire life, I have absorbed a degree of resilience, appreciation for common sense, and unflashy problem-solving that many women of color demonstrate. It is no accident that Black Lives Matter was co-founded by Alicia Garza, Opal Tometi and Patrisse Cullors in the wake of the death of 18-year-old Michael Brown in Ferguson, Mo. Within the span of two years, BLM expanded into an effort to organize the energies and intellect of people of color and whites toward strategically resisting police brutality and other American institutions where systemic race and gender discrimination put us at risk. The energy and determination of BLM, its ability to spur dozens of protests nationwide since 2014, garnering condemnations from some police unions and elected politicians, seems to have inspired organizers of the Women's March without, apparently, deeply informing the group about the full range of potential negative consequences for participants.

Telling also is the group's tepid nod to intersectionality, the concept coined by Kimberlé Williams Crenshaw, a black legal scholar, which has informed the positions and actions of many emerging protest movements in recent years. Crenshaw's concept of intersectionality — the critical analysis of gender, ethnic and class aspects that drive inequality in populations and social structures — was earlier identified as "interlocking" factors by Chicana playwright Cherríe Moraga. This intellectual trait, the ability to recognize the multidimensional layers of inequality, are bedrocks of effective leadership across disciplines — although when demonstrated by women of color they are rarely characterized as such by the dominant society.

Today's iteration of feminism might gain wider credibility by recognizing and adopting core aspects of women of color's experiences: resilience, self-love and fundamental understanding that one's self-worth is not defined by the same markers of success that have defined white male status since the beginning of time in America.

Amy Alexander, an award-winning writer and editor, is the author of four nonfiction books, including Uncovering Race: A Black Journalist's Story of Reporting and Reinvention. Follow her @amyalex63.

An earlier version of this article incorrectly stated that Johnetta Elzie created the Black Lives Matter movement. It was co-founded by Alicia Garza, Opal Tometi and Patrisse Cullors