Accessibility links
Black Muslims Face Double Jeopardy, Anxiety In The Heartland : Code Switch The intersection of these two identities has become more acute thanks to Black Lives Matter and protests against the Trump administration's executive order on immigration. 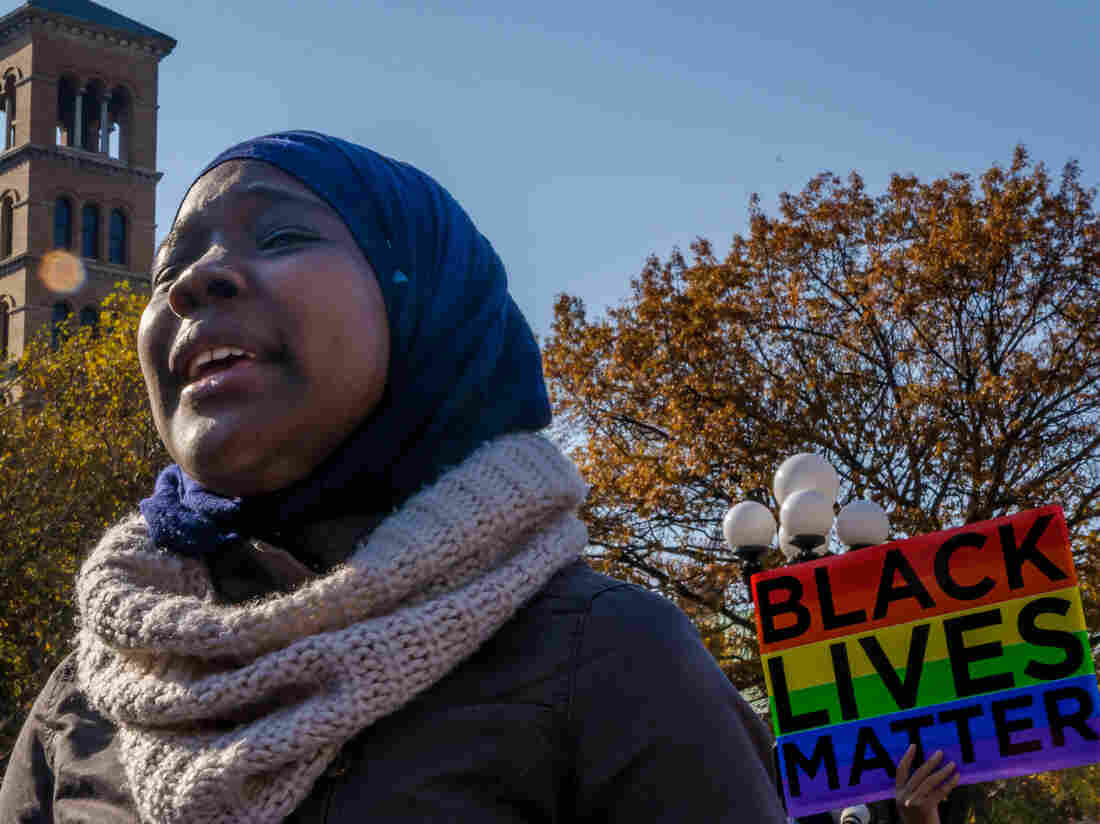 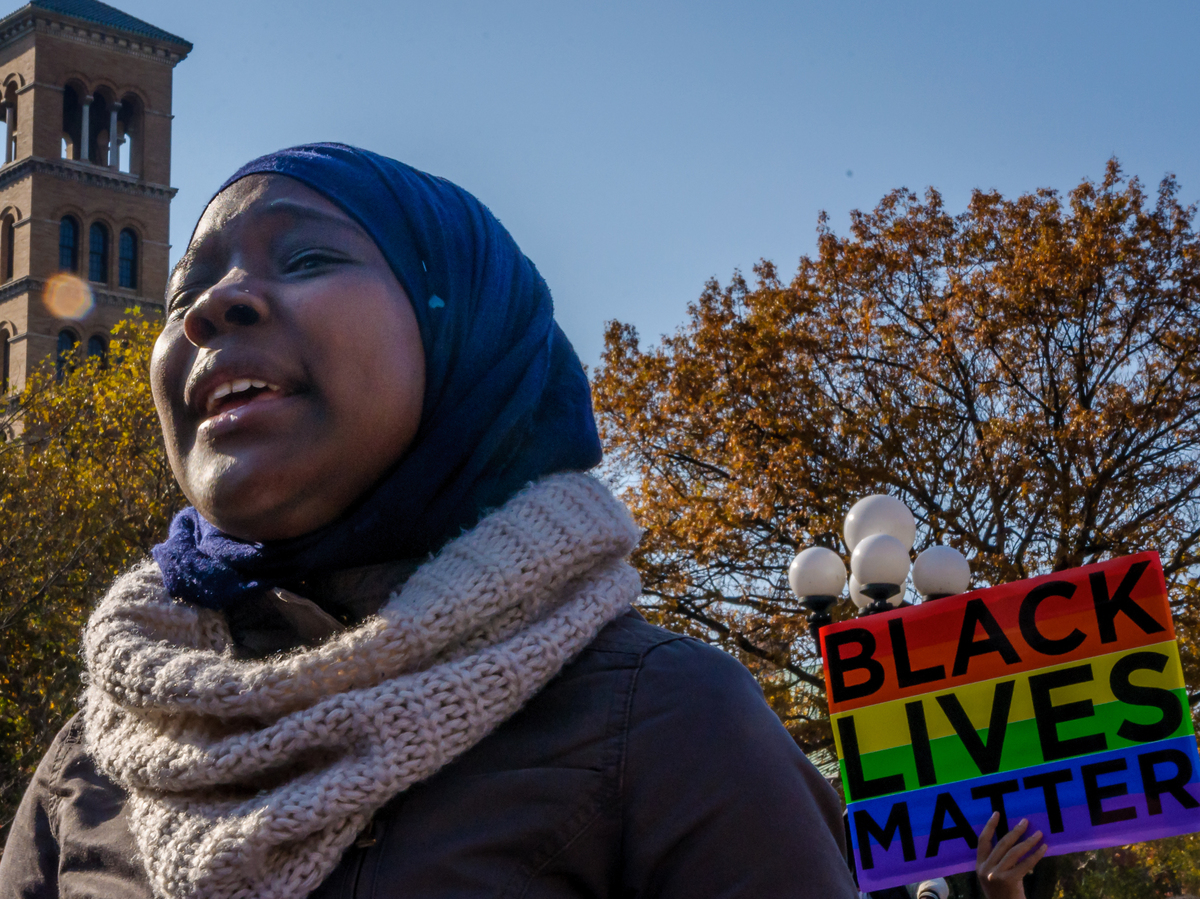 In the United States, black Muslims have to balance multiple identities.

Black parents across America have long instructed their children on navigating discrimination and avoiding its sometimes deadly consequences. But for black immigrant Muslims, this conversation takes on an entirely different dimension.

Growing up, Ahlaam Ibraahim, a Somali-American student at the University of Washington, felt the dual struggles of being a religious and ethnic minority. "As a black woman, I'm scared of the police because I see people that look like me killed simply for being black. As a Muslim woman, I'm scared of being attacked and killed," Ibraahim says. "Do they notice I'm a Muslim because of my hijab and my blackness because of my melanin?"

Muslim 'Twoness': Fearful Of Some, Feared By Others

The intersection of these two identities has become more acute thanks to Black Lives Matter and protests against the Trump administration's executive order on immigration.

A recent survey by Pew Research showed that almost 6 in 10 Americans believe Muslims face "a lot" of discrimination. Another Pew study found that while races differ in their perceptions of how anti-black discrimination affects achievement, nearly a third of white Americans believe blacks have a harder time getting ahead compared to 70 percent of black Americans.

According to Hind Makki, a Sudanese-American interfaith and anti-racism educator, these concerns are common among many Muslim American youth, especially those of African descent. "A lot of black Muslims from immigrant backgrounds live at the intersection of Islamophobia and anti-black racism, which affects how they see America and how they raise their kids."

From Malcolm X to Muhammad Ali, America's most famous Muslims are indisputably black. Yet the visibility of the nation's native and immigrant Muslim populations have been erased due to the heightened fears of terrorism post-9/11. Since the attacks, Muslims of Arab descent, especially men with turbans or women with hijabs, have borne the brunt of anti-Muslim rhetoric.

"I think if I wore taqiyah [an Islamic prayer cap] on my head or if my beard were grown out, I'd probably receive more discrimination than I do now," says Amir Mohammed, a Sudanese-American rapper better known by his stage name Oddisee. "I can't escape or hide my color, so I'm stereotyped based on being a black person in America. Because I'm not Middle Eastern, it's only after they find out that I'm Muslim that I'll also encounter the Islamophobia." 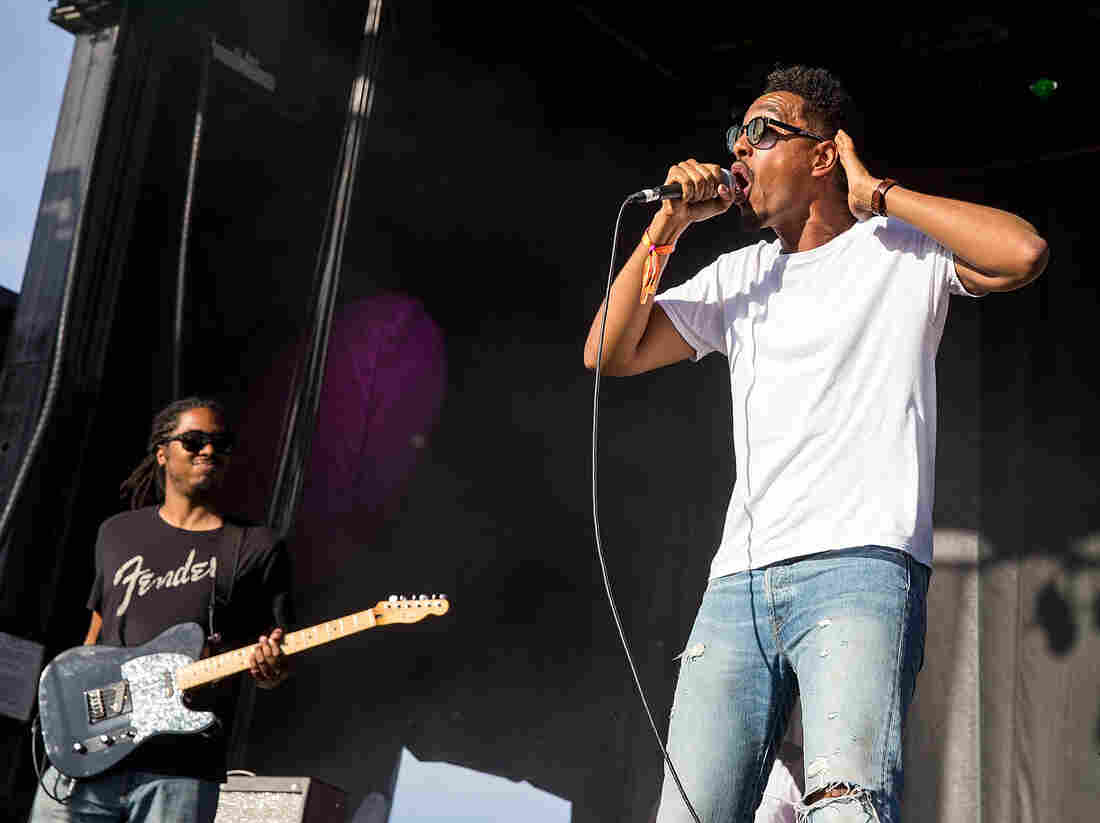 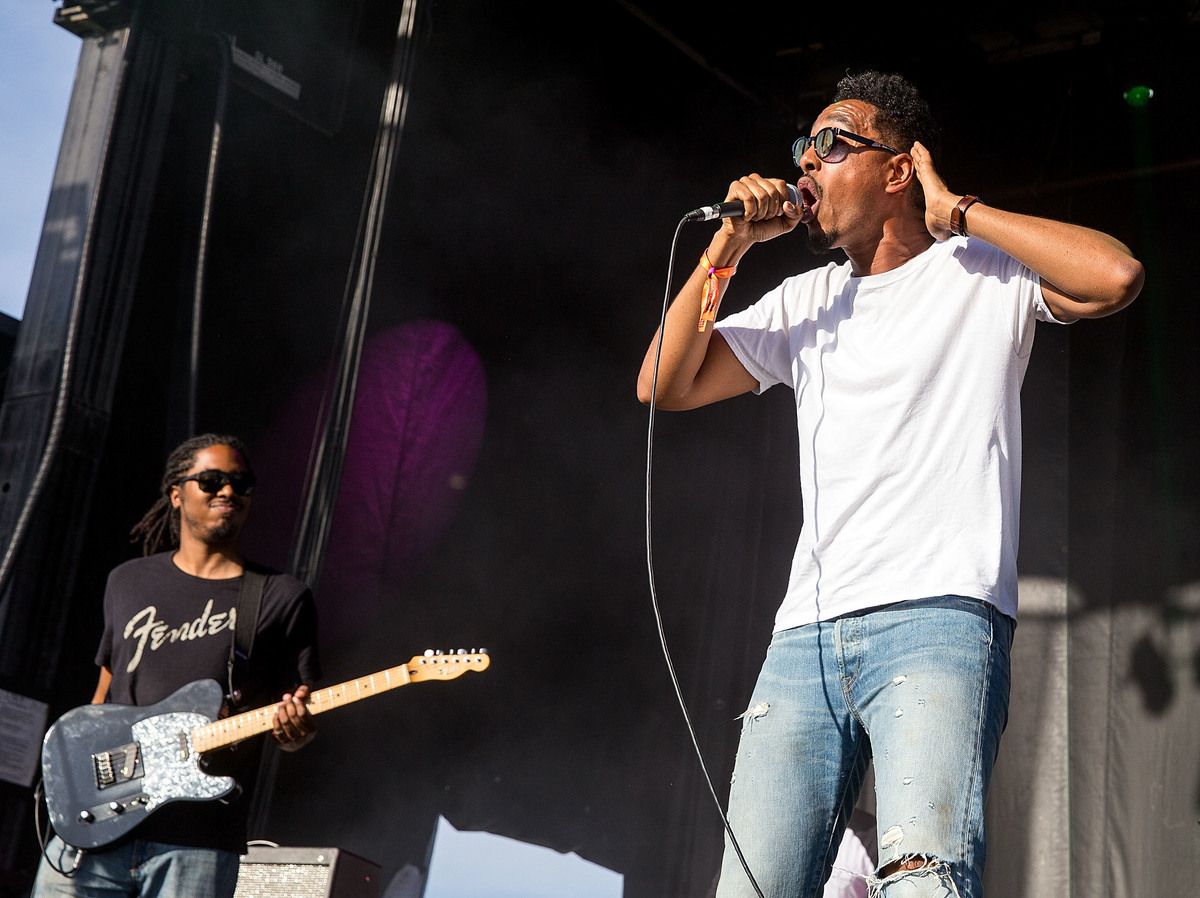 Amir Mohamed el Khalifa (Oddisee) performs onstage at the Sasquatch Music Festival at the Gorge Amphitheatre on May 30, 2016 in George, Washington.

The face of American Islam is changing, and while some black Muslims might welcome greater visibility for their religious identity, embracing their religion and immigrant heritage may come with a cost.

President Trump's executive order created panic among Muslims from seven majority-Muslim countries. For Somali- and Sudanese-Americans, who come from two of the three African countries on the list, anxiety may be particularly acute. These communities are primarily based in Midwestern cities that have already been subject to heightened scrutiny from the Trump administration over claims of extremism and violence.

Minneapolis has the largest Somali-American population in the country while Chicago boasts a large Sudanese-American community. Despite their rapidly rising immigrant populations, both cities remain highly segregated and have been national focal points in high-profile cases of police brutality and institutionalized discrimination. In March 2015, Hazma Jeylani, a 17-year-old Somali-American, was stopped under suspicion of stealing a car. In the smartphone video capturing the arrest, a Minneapolis police officer threatened to break the teenager's leg. In 2002, the city's Somali community was outraged following the police shooting of Abu Kassim Jeilani, a mentally ill Somali man.

President Trump has been outspoken in his views on both cities. Last November, Trump visited Minneapolis and said some Somali migrants there, "[are] joining Isis and spreading their extremist views all over our country and all over the world." Such statements from the nation's highest office raised alarm bells for black immigrant Muslims, for whom problems with urban policing are married to increased scrutiny of immigrants.

The realities of being black in America leave immigrants with no doubt about their identity in America. "I think that when many of the older generation come here, they realize that if they don't identify as black, America will do it for you," says Oddisee. "When my father moved to Prince George's County, a predominantly black area, when my neighbors looked out the window, they saw a black family." Somalia and Sudan have a complicated relationship with race on the fault line of racial consciousness because they straddle the border between Arab and black Africa.

For Hind Makki, the slow acknowledgement of blackness within older generations has lead to an active embrace of African-American identity among her peers. "I've witnessed a shift of feeling and claiming blackness as a cultural, political, and religious identity, and a shift away from the Middle Eastern/Arab identity."

With nearly a third of American Muslims identifying as African-American, calls for intersectionality are gaining traction. The Council on American-Islamic Relations (CAIR) has openly supported Black Lives Matter while leading black commentators like Shaun King and Van Jones have been outspoken in their calls for solidarity with Muslims affected by the rise in hate crimes and anti-immigrant rhetoric.

Magari Aziza Hill, an African-American Muslim and Co-Director of Muslim Anti-Racism Collaborative, says the experiences of black immigrant Muslims are often erased. "Since most black American Muslims are African-American, there's a tendency to render African Muslims invisible. Discussions of anti-blackness within immigrant Muslim communities often erase the experience of African immigrant communities. I've certainly been guilty of that and have been trying, especially given recent events, to shed more light on those stories."

In Minnesota, the local CAIR chapter has experienced a marked increase in its caseload. According to Jaylani Hussein, the executive director, the abrupt rollout of the immigration ban fueled distress and paranoia that heightened pre-existing fears among many Muslims. "Traditional African-Americans are already greatly concerned about their rights and dealing with law enforcement, particularly local police. But immigrant black Muslims also have to deal with the Department of Homeland Security and FBI," says Hussein. "That exacerbates perceived notions of what law enforcement is, particularly for many that come from police states where law enforcement can detain people for no reason."

Daad Sharfi, a Sudanese-American student at Yale University, lives in Albany Park, one of Chicago's most ethnically diverse neighborhoods. Although her immediate family was naturalized during the Obama years, many members of her extended network are permanent residents or visa holders vulnerable to the consequences of the administration's executive order. "I am an immigrant and I have always been surrounded by immigrants and asylum seekers, so this attack on migration was personally very disheartening as it jeopardized my community and the entire system through which my family was able to enter the U.S.," she says.

After the Ninth Circuit Court refused to uphold the administration's immigration ban, the future for black Muslims of immigrant descent remains uncertain as the Trump administration issues a revised executive order. However, individuals like Sharfi and organizations like CAIR are gearing up for a fight. On her part, Sharfi plans to pursue a career in immigration law following her graduation from Yale in May. Mohamed says CAIR will continue to engage in civic education and policy advocacy, leaning on powerful advocates including Rep. Ilhan Omar, the first Somali-American legislator in the United States and Rep. Keith Ellison, who represents Minnesota's 5th district, which includes Minneapolis.

Akinyi Ochieng is a writer and researcher studying at the London School of Economics. Follow her @kikiochieng.