Accessibility links
HBCUs Graduate More Poor Black Students Than White Colleges : Code Switch Roughly half of HBCUs have a freshman class where three-quarters of the students are from low-income backgrounds, while just 1 percent of non-HBCUs serve as high a percentage of low-income students. 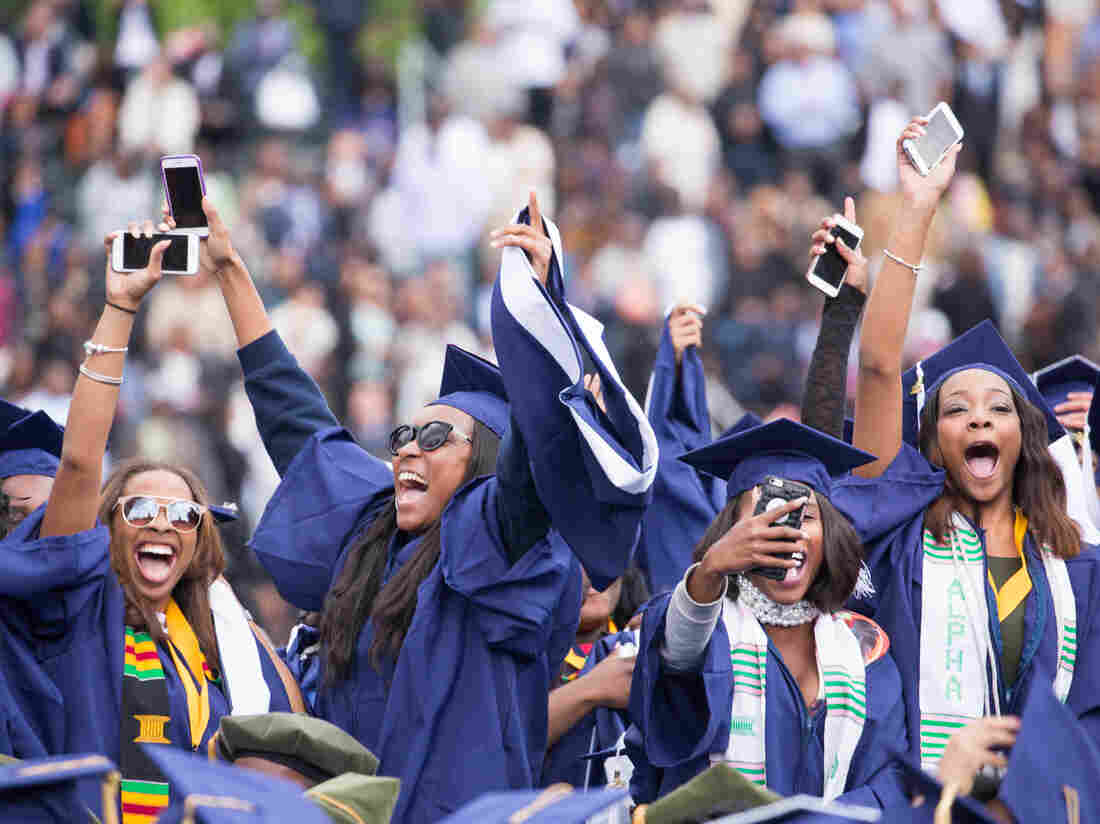 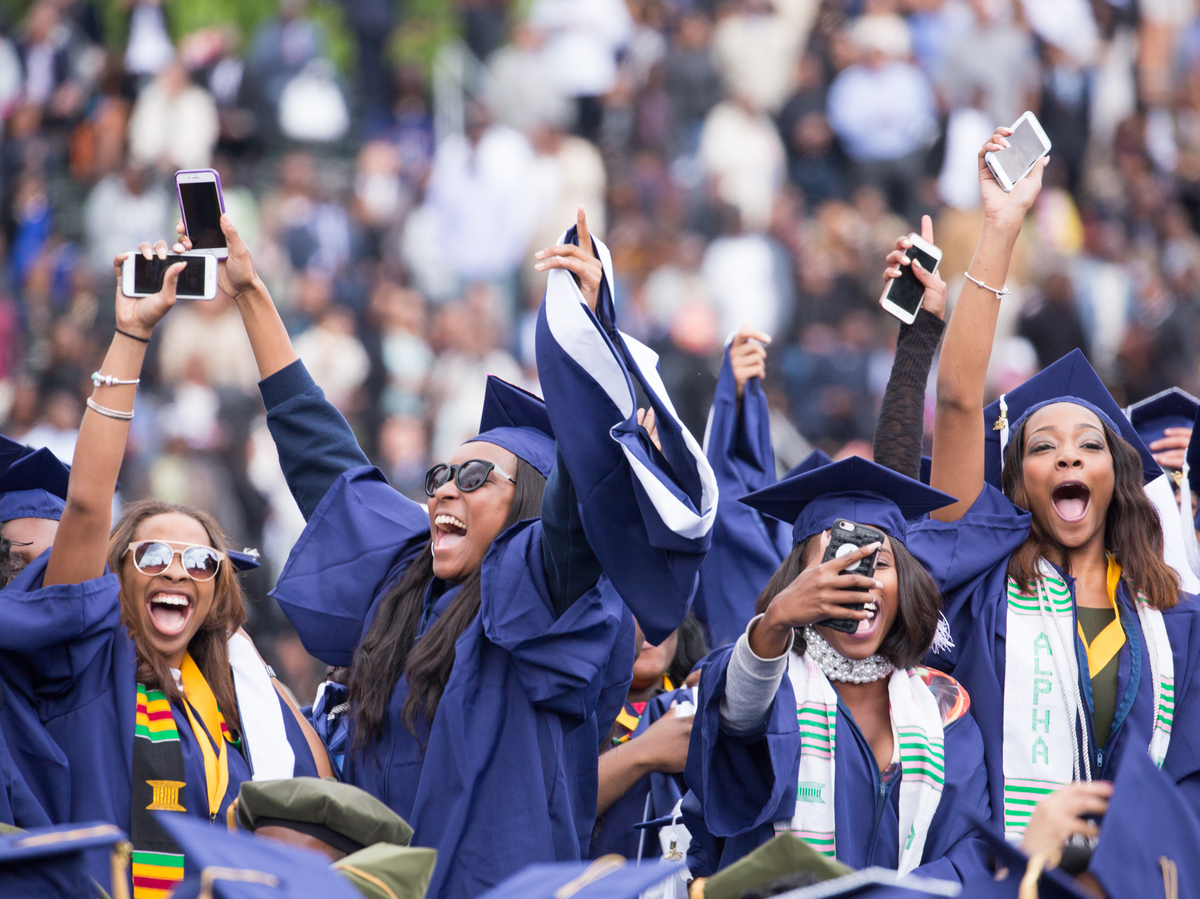 Howard University graduates celebrate at commencement in May 2016.

At a congressional luncheon in their honor Tuesday, Education Secretary Betsy DeVos told leaders from historically black colleges and universities that the Department of Education "will continue working closely with you to help identify evolving needs, increase capacity, and attract research dollars. We will also work closely with you to launch new initiatives that meet the needs of today's students."

"HBCUs remain at the forefront of opening doors that had previously been closed to so many," she said. "You made higher education accessible to students who otherwise would have been denied the opportunity."

The White House acclaim for HBCUs comes in the same week as a study by The Education Trust, a Washington, D.C.-based nonprofit, revealed that the nation's HBCUs are doing a much better job than predominantly white schools in graduating low-income black students.

The study, entitled "A Look at Black Student Success," concluded that at most of the nation's four-year public and private colleges and universities, a significant gap exists between the graduation rates of black students and white students. At the 676 public and private nonprofit institutions included in The Education Trust survey (not including HBCUs), the six-year graduation rate for black students was 45.4 percent — 19.3 points lower than the 64.7 percent graduation rate for white students.

But the authors also burrowed beneath the numbers to assess how well the nation's institutions of higher learning are doing with low-income students — identified as those eligible for the Pell Grant. A college degree has long been much less attainable for low-income Americans: Federal statistics indicate that an individual whose household income is in the top quartile of Americans is eight times more likely to hold a college degree than an individual in the lowest quartile.

The study compared the graduation rates for schools whose Pell Grant recipients make up 40–75 percent of their student bodies. In this comparison, the average graduation rate for black students at HBCUs was 37.8 percent, compared with 32.0 percent for non-HBCUs. The study noted that roughly half of the nation's 105 HBCUs have a freshman class where three-quarters of the students are from low-income backgrounds, while just 1 percent of the 676 non-HBCUs serve as high a percentage of low-income students.

Joe B. Whitehead Jr., provost and vice chancellor of Academic Affairs at North Carolina A&T State University, said that while A&T — one of the top five schools in the country in conferring bachelor's degrees to African Americans — is seeking to enroll more students who are better prepared, the school recognizes that it must help students who are from more challenging backgrounds.

"While it doesn't come out in the data, many students who are lower on the socioeconomic scale would be more successful if they didn't have problems outside the classroom," Whitehead said. "We are looking for ways to make them feel at home, make them feel comfortable discussing issues that may be at play in their lives that are obstacles to their performing at a higher level. It could be a lack of study habits, but it could be that there is a family issue at home the student is worried about. In some cases, students are helping maintain the household while they are in college. All of these things play a role in their success."

Marybeth Gasman, a professor at the University of Pennsylvania and the director of the Penn Center for Minority Serving Institutions, said in her research on schools with large minority populations such as HBCUs, she found that they add significant value to their students' lives.

"Institutions can brag about their graduation rates, but I want to look at how many Pell Grant-eligible students you have, how many are receiving the maximum amount of financial aid, how many come from public schools in urban areas or rural areas that don't receive any attention?" Gasman said. "That's really important. A lot of schools that might be bragging about their graduation rates typically are accepting more affluent students of all races. But the real challenge, the real work is done when you're going after low-income students and trying to bring them to a new level. And more than likely you're bringing their families out of poverty, which is typically what will happen. You see this a lot among African-Americans and Latinos. You're really changing families' lives."

Black students at HBCUs also find themselves among a more diverse student body of late. Over the last several decades, these colleges have significantly increased their enrollment of Hispanic and white students. Gasman released a report in 2011 stating that Hispanics made up 3 percent of the national HBCU enrollment while white students totaled 13 percent. 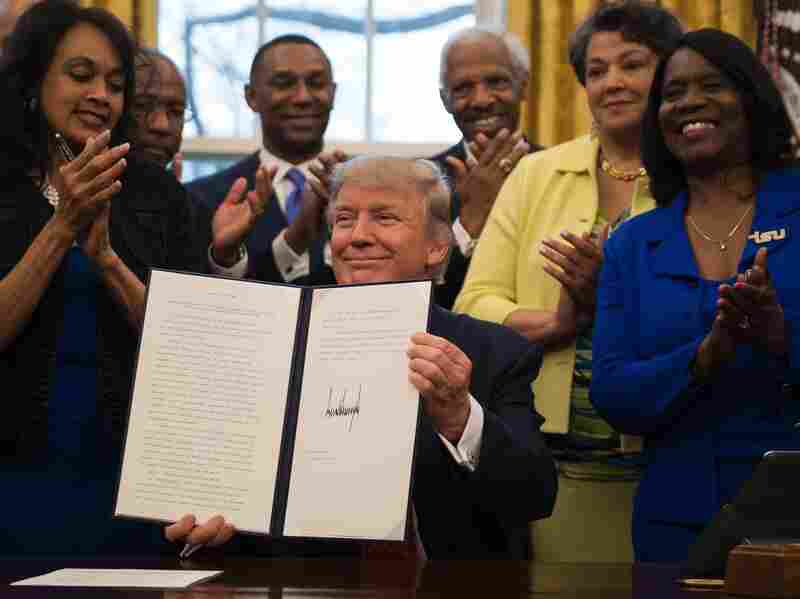 President Trump holds up an executive order to bolster HBCUs after signing it in the Oval Office on Tuesday. Jim Watson/AFP/Getty Images hide caption 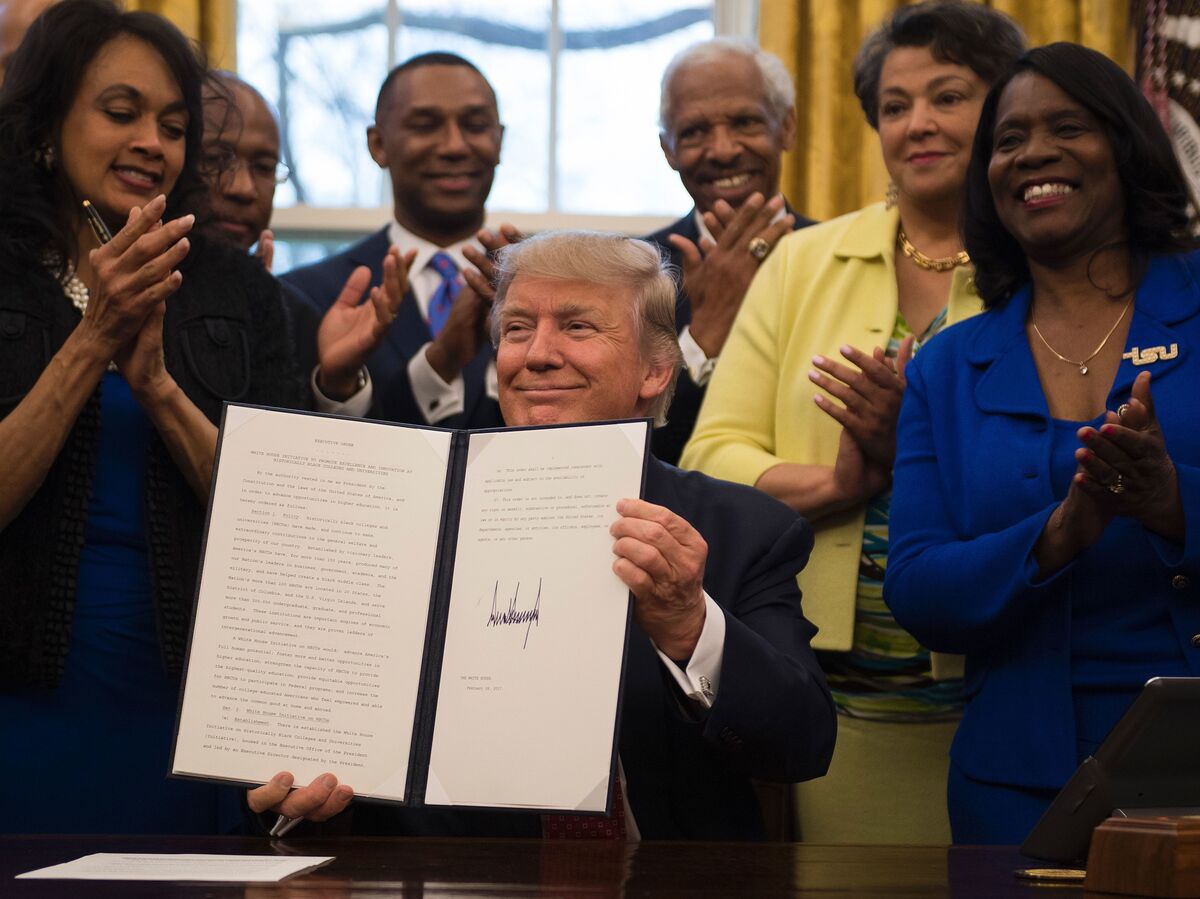 President Trump holds up an executive order to bolster HBCUs after signing it in the Oval Office on Tuesday.

The White House this week delivered what appears to be good news for the nation's historically black colleges and universities.

On Monday, it hosted a group that included representatives of 80 HBCUs, and President Trump signed an executive order moving the federal program that supports HBCUs from the Department of Education back to the White House and possibly sending more funding to HBCUs in the future. A White House official told Reuters that moving the HBCUs back to the White House makes them "a priority again" — a possible jab at President Obama, who many HBCU leaders felt wasn't responsive to their needs.

During a two-day "HBCU Fly-in" lobbying effort in Washington, HBCU leaders on Monday met in the Oval Office with President Trump, who addressed the delegation by calling them a "beautiful group of people" who were doing "tough and important" work. Vice-President Mike Pence said the White House would increase support of HBCUs as a part of the administration's domestic improvement agenda for African-American communities. "You deserve far more credit than you get, and know that beginning today, this administration is committed to making sure that our historically black colleges and universities get the credit and the attention they deserve," he said.

Walter M. Kimbrough, president of Dillard University, published a piece on Medium.com complaining that because of the unexpected Oval Office meeting with President Trump, the HBCU leaders didn't get much chance to give express their views to the administration.

"[The Oval Office meeting] threw the day off and there was very little listening to HBCU presidents today — we were only given about 2 minutes each, and that was cut to one minute, so only about 7 of maybe 15 or so speakers were given an opportunity today," Kimbrough wrote on Monday. He said he had planned to use his time to press the administration to increase federal Pell Grants, which are utilized by more than 70 percent of students attending HBCUs.