Accessibility links
"American Crime" Takes On Farming And Illegal Immigration With An Unsparing Lens : Code Switch For producers John Ridley and Michael J. McDonald, the decision to set this season, which tackles immigration and labor, in North Carolina was both creatively and politically significant. 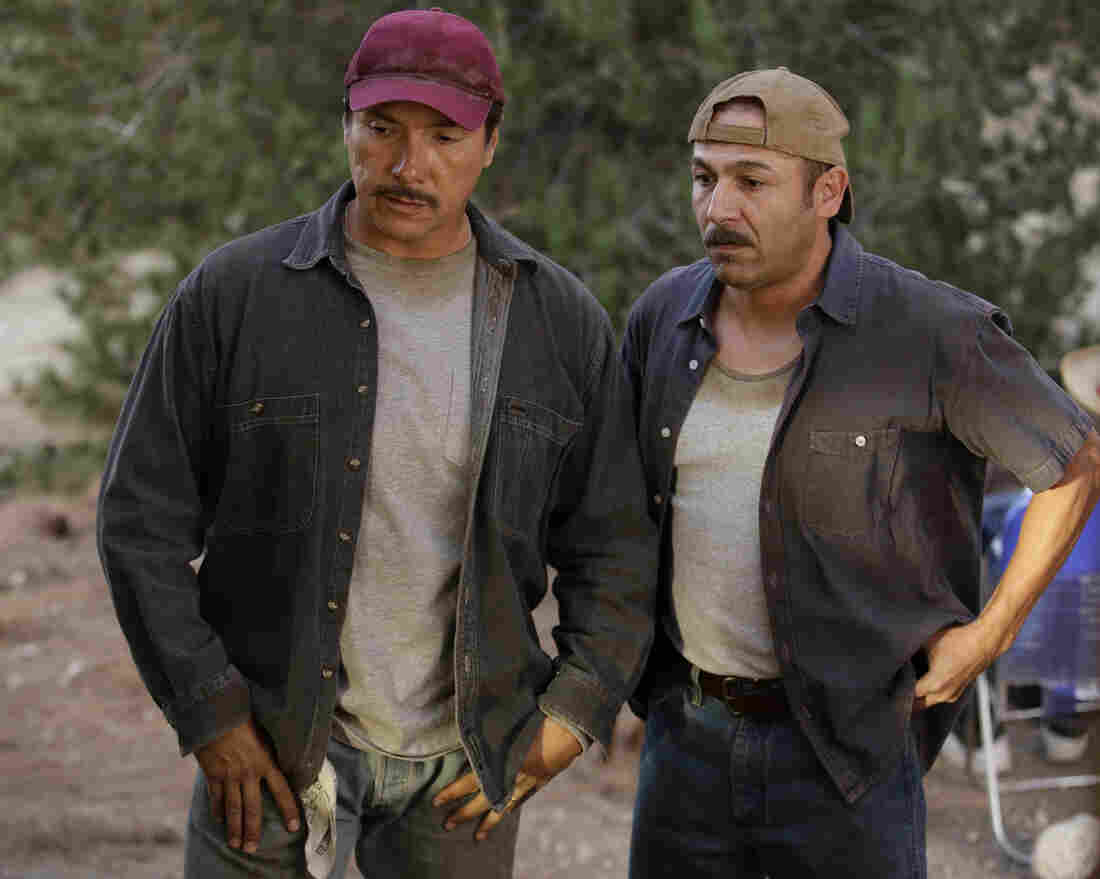 In Season Three: Episode Two- While Luis finds himself sinking further into servitude on the farm, Isaac tries to protect Coy from abusive conditions in the fields. Meanwhile, Jeanette begins to wonder if her family is down-playing a trailer fire, which killed a number of their undocumented workers. Nicole Wilder/ABC hide caption 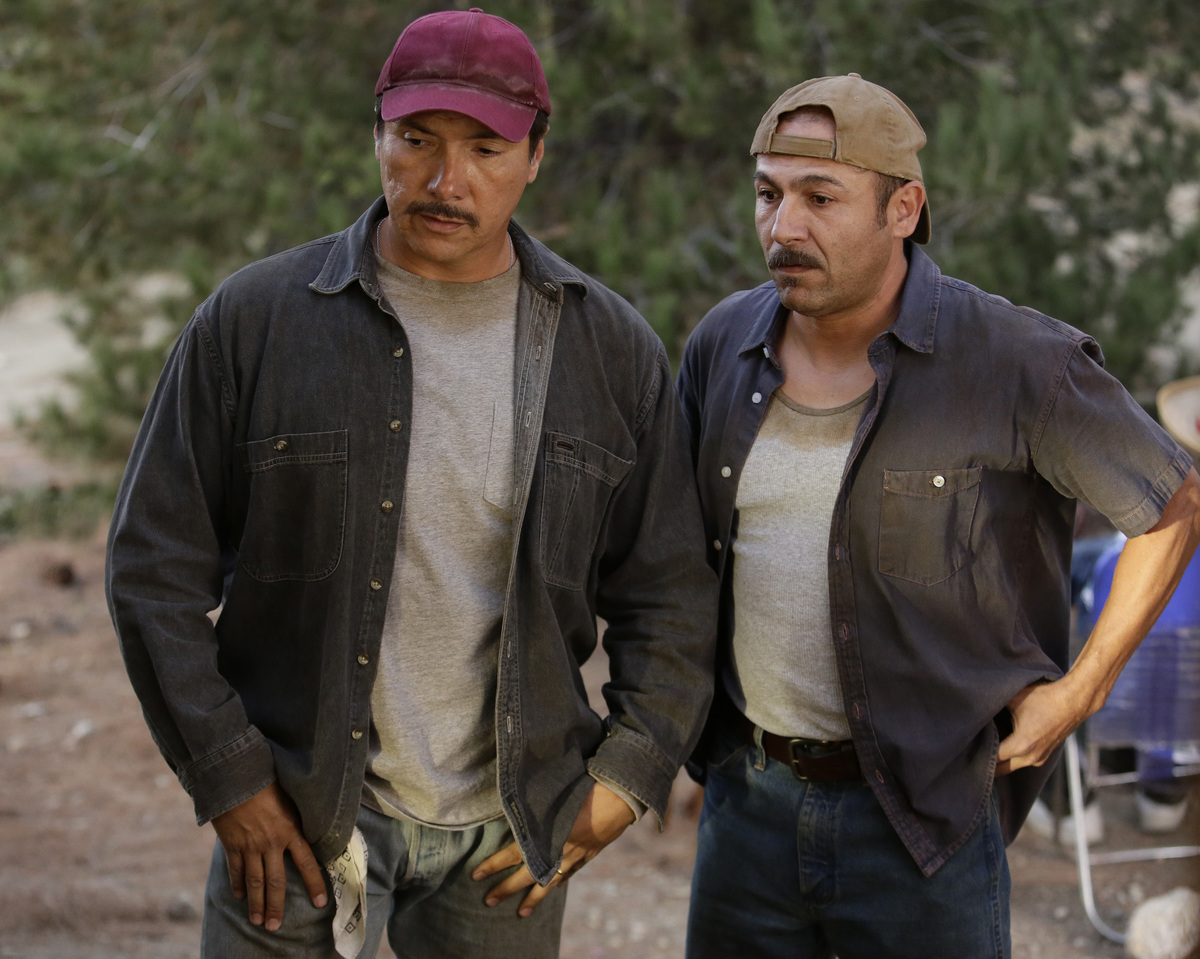 In Season Three: Episode Two- While Luis finds himself sinking further into servitude on the farm, Isaac tries to protect Coy from abusive conditions in the fields. Meanwhile, Jeanette begins to wonder if her family is down-playing a trailer fire, which killed a number of their undocumented workers.

As in its past two seasons, ABC's anthology series American Crime opens with a timely and provocative image. In a nondescript desert near the U.S./Mexican border, a group of men and women are being smuggled into the United States. They manage to cut through a gap in the wall that already divides the two countries. Quickly though, viewers learn that the red-capped man the show is asking us to follow isn't interested in merely nabbing a farm job in nearby Texas or California. He has his eyes set on North Carolina. His reasons are slowly revealed throughout the show's eight-episode run — as it turns out he's looking for someone who might have gone missing from one of the farms in the state.

For producers John Ridley and Michael J. McDonald, the decision to set this season, which tackles immigration and labor, in North Carolina was both creatively and politically significant.

Not only does this Southern state have a long history of segregation, but the rising numbers of Latin American immigrants coming into its rural areas is rapidly changing the state. North Carolina stands as a microcosm of America today, a perfect tinder box that offers insights into immigration from a different vantage point. "We wanted to look at a place," McDonald said, where that "wasn't baked into the system, like California or Arizona, but a place where this influx of immigrants from Mexico and Central America was a new phenomenon and how that was reflected in a state where there was a history of racial tension." This is why the narrative about Luis Salazar (played by Benito Martinez), that red-capped man making his way to the North Carolina tomato farms who ends up witnessing the abuse and exploitation happening in these rural areas, feels so different from past attempts at putting a face on the illegal immigration debate.

"You say 'slavery' and people think you're hysterical," we hear social worker Abby Tanaka (played by Sandra Oh), say at one point early in the season as she speaks about the undocumented workforce in the state. "Well, we are not. In North Carolina alone 39 percent of the state's 150,000 farm workers report being illegally trafficked or otherwise abused. That is physical abuse, sexual abuse, death threats and wage theft. There's always the possibility of exposure to farm chemicals," she says. The backdrop for all this is an agricultural industry that pumps over $200 billion into the American economy annually. Such fact-loaded scenes in American Crime don't feel as heavy-handed because they underline the way stories about a young undocumented Mexican who goes missing, or about a young woman who's raped by the men who manage the farm where she works, reflect a larger for-profit machinery at work.

Ridley singles out the Hesby family whose tomato farm is at the center of the season's storyline. Their choice to hire a mostly undocumented workforce (via contractors) is a direct response to increased competition coming from other farms and from abroad. "You get the pressures that they're under," Ridley notes. "You get that they are being squeezed by some other organization." That's not to say the show is out to exonerate them. But nor is it out to blankly indict them. "No one person is so utterly heroic, and nor are they horrible," he said. He believes that reducing the issue to border jumping negates the economic and political tensions that both create and sustain a farming system that would fail without the workers who enter the United States illegally.

In real life, the complexities abound and can't be resolved at the end of a narrative arch.

Moises Serrano, an undocumented activist, has spent his entire life navigating the complexities. "Politicians try to simplify it but migration is an incredibly complex issue that cannot be boiled down to rhetoric and 140 characters in a tweet," he says. Serrano was brought into the U.S. when he was 18 months old. His parents settled in Yadkin county in North Carolina where he grew up. His undocumented status has not derailed him from trying to get an education and a well-paying job, while advocating for immigration reform and the DREAM act. Serrano points out that the hostile political climate against undocumented workers in the U.S., particularly in North Carolina, has been bolstered by a slew of policies and programs passed in the last decade. He points to the REAL ID Act of 2005, which modified the requirements needed to be issued a driver's license and to the expansion of e-Verify, an employment-verification program that checks a worker's immigration status, as moves that pushed undocumented people out of public spaces.

The workers' vulnerability makes the stories in this season of American Crime prescient. They uncover working and living conditions that most Americans rarely get to see. "Workers go missing all the time," one woman tells Luis while on his search for his son, "Nobody cares."

When doing research for this season, McDonald said he kept hearing a sense of fear from undocumented people when it came to asking for help, which he believes leads to an impunity that remains underreported and underrepresented. The show portrays the abuse and exploitation of workers in very bare terms: Farm workers refer to the fields as "The Green Motel," where they sexually abuse the few women around; the cruel intimidation tactics that keep workers from leaving lest they lose their wages or risk deportation. These are compounded by the fact that many in that position feel unable to seek help. "They're afraid to go to law enforcement or social workers for help," said McDonald. A 2013 study by the University of Chicago found that "70 percent of undocumented immigrants reported they are less likely to contact law enforcement authorities if they were victims of a crime."

Ridley says that "American Crime is less about crime and more about America." And so while a 911 call opens this season (a Spanish-language speaker informs us in voice-over that there's a body in the river), the show works hard to make its interwoven storylines make viewers grapple with the vision of America on their screens. Jeanette Hesby (played by Felicity Huffman) functions as an audience surrogate: upon learning of the deplorable conditions workers at her husband's family farm are living under, she sets out to become informed, knowing that she has to turn her outrage into action.

"The amount of people this is happening to, and how they're an invisible class that we have demonized, which is the worst thing about it. We've made them bad guys — 'bad hombres,' as our friend Donald Trump likes to say," McDonald says. "But these are the people that are most abused in our society." That's what makes his heart break and what drives him to tell stories that open other people's eyes not just the plight of these particular characters, but to the systemic problems they represent.