Accessibility links
Chinatowns Across The Country Face Off With Gentrification : Code Switch Community groups use both "hard" and "soft" approaches, involving organizing residents, bringing media attention to evictions, and advocating for government policies that protect tenants.

Chinatowns Across The Country Face Off With Gentrification

Chinatowns Across The Country Face Off With Gentrification 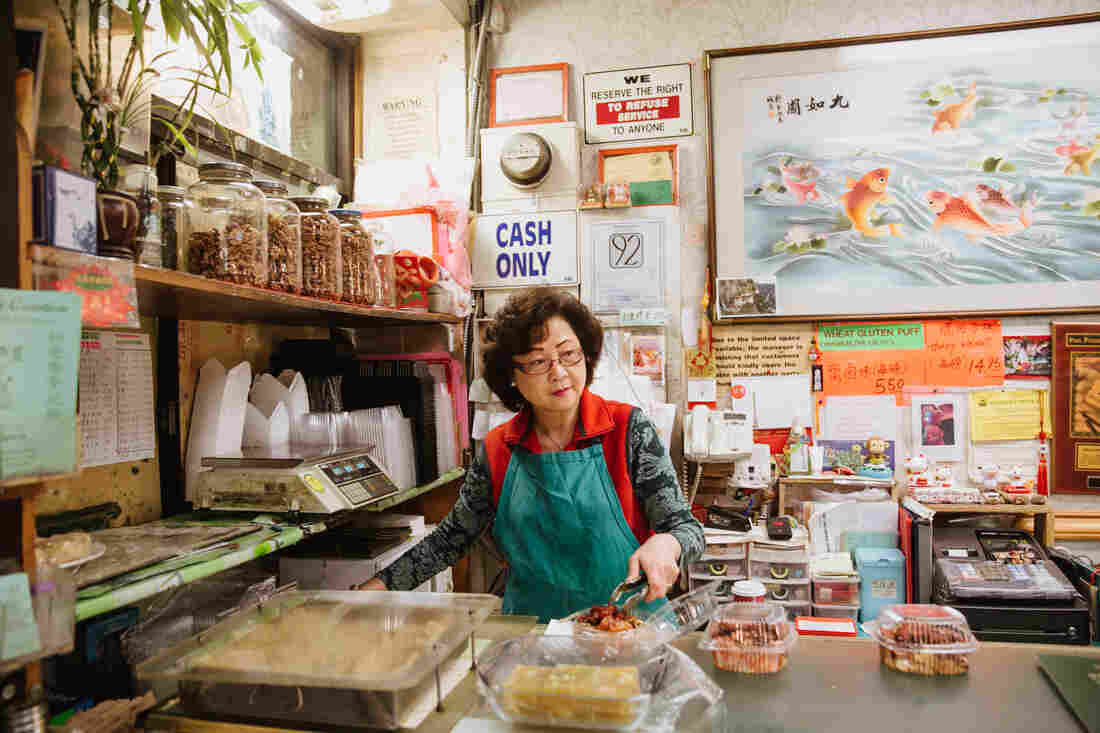 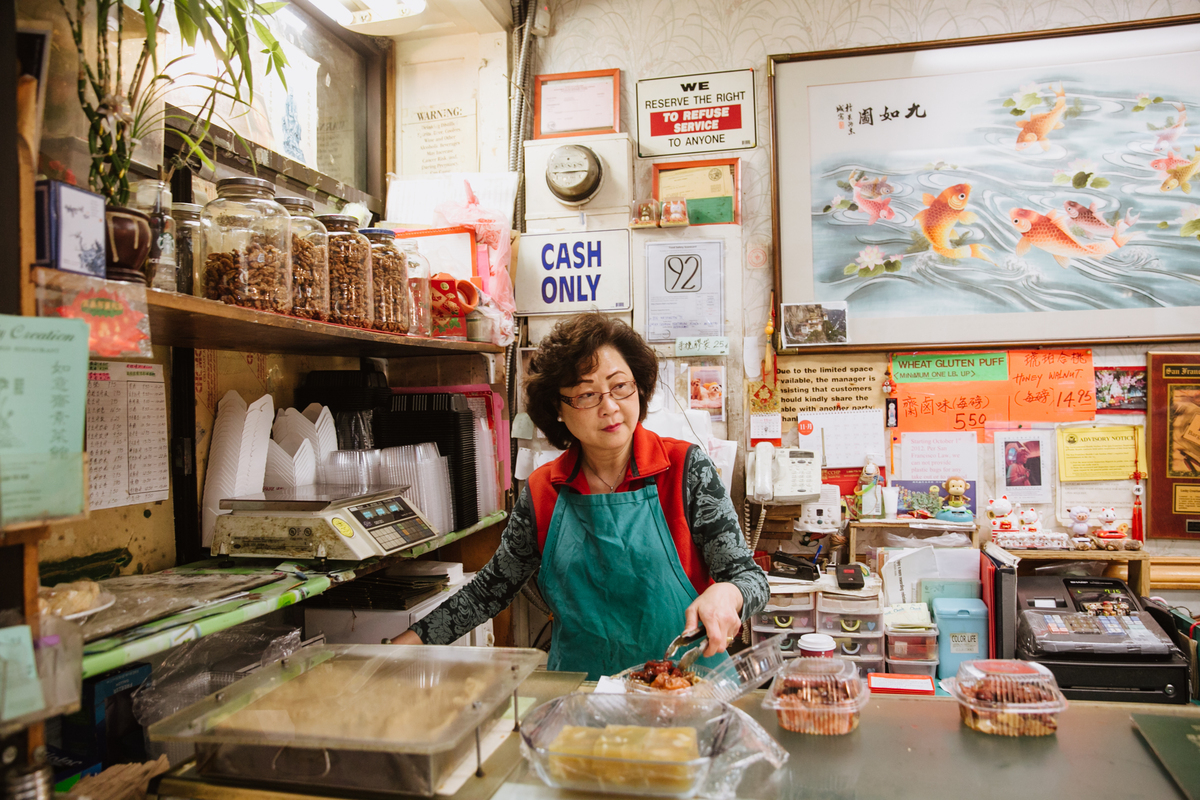 On a Friday evening in January, people spilled out of a storefront into an alleyway in San Francisco's Chinatown. Neighborhood business owners, parents with young children, and artists in warm coats chatted with one another. Nearby, youth from a martial arts school practiced with wooden staffs under the alleyway lights.

The occasion was the opening of "Eat Chinatown," a photography exhibit at 41 Ross, a gallery run by the Chinese Culture Center and the Chinatown Community Development Center (Chinatown CDC) in what's considered the oldest alley in the city. For the exhibit, photographer Andria Lo and writer Valerie Luu researched and documented local eateries. The artists focused on legacy businesses that have been in the neighborhood for more than 30 years — such as Capital Restaurant, Hon's Wun-Tun House, and Eastern Bakery — not new upscale additions, such as Mister Jiu's, where a five-course tasting menu costs $105.

Some of Andria Lo's work from the "Eat Chinatown" exhibit, featuring the exterior of Eastern Bakery (left) and the roast pork with rice plate from New Lun Ting Cafe (right). Courtesy of Andria Lo hide caption

Today, Chinatowns like this one are often located in the heart of large cities, making them vulnerable to gentrification.

Originally formed at the edges of downtowns, Chinatowns held on as such commercial and residential areas expanded. Collectively, they represent more than 150 years of immigrant survival since the first wave of Chinese immigration began in the 1850s. "Chinatowns used to be ghettos because of segregation," said Peter Kwong, a professor of urban policy and planning at Hunter College in New York City. "After the 1965 Immigration Act, you have a resurfacing of Chinatowns all throughout the United States, and particularly in the East Coast." 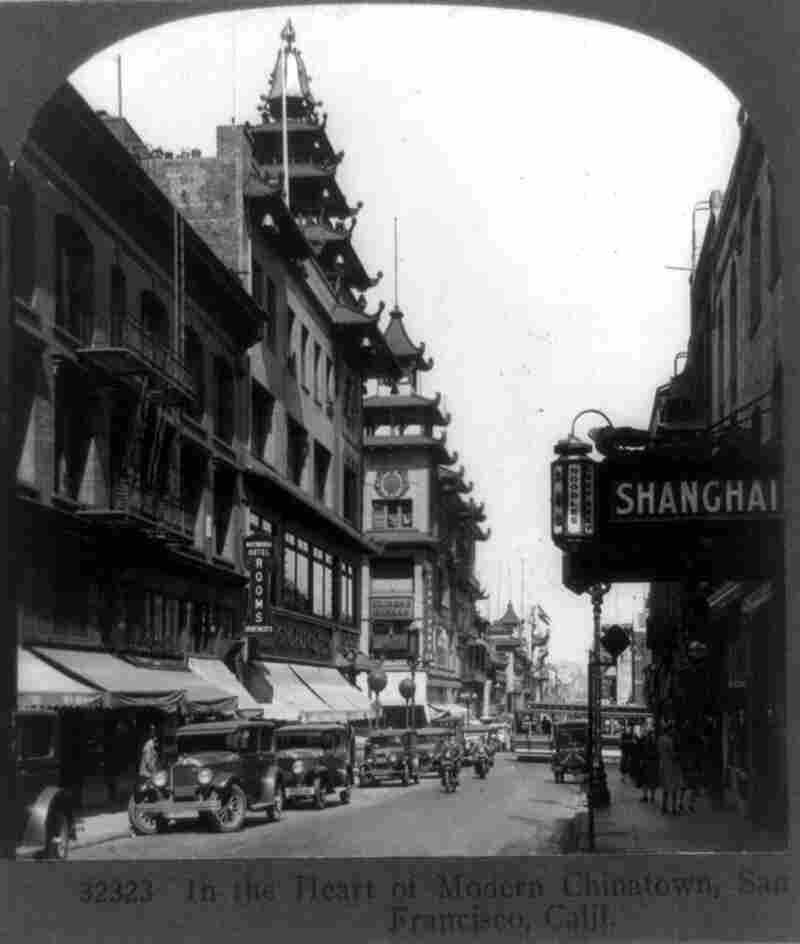 A view of San Francisco's Chinatown in 1929. Library of Congress hide caption

Although the details may be different in each Chinatown, the results of rising numbers of white residents is the same: the displacement of low-income immigrants. In Boston, luxury towers have replaced traditional row houses, making the area look more generic and less like Chinatown. In New York, garment factories that used to employ immigrants have been turned into doctors' offices and gyms. Contemporary art galleries have moved in, paying four to five times the rent that was paid by the bakeries and herbal medicine shops they supplanted. In San Francisco, families that cram into single room occupancy (SRO) hotels are being pushed out. Once regarded as the housing of last resort, the rooms are now being marketed to tech workers and students.

Community groups have adopted a variety of strategies to slow gentrification down. Chinatown CDC uses both "hard" and "soft" approaches, said Erika Gee, a senior planner with the organization. The "hard" approach involves organizing residents, bringing media attention to evictions, and advocating for government policies that protect tenants. The "soft" arts and culture approach also touches on community issues, "But it's a celebration of what Chinatown is, what people's experiences are, and doing it in a way that reaches people in a positive way," Gee said.

(Left) A view of China Station, the U.S. Post Office on Clay Street in Chinatown, San Francisco, circa 1955. Established in 1931, it served the 25,000 residents of Chinatown. (Right) A shop assistant at the Tai Ping Company boutique on Grant Ave. in San Francisco's Chinatown, demonstrates a giant Chinese fan to an interested customer. Orlando/Three Lions/Getty Images hide caption

Chinatown CDC views the "Eat Chinatown" exhibit as a way to tell the stories of the people behind the restaurants and bakeries. For example, the artists wondered why so many of Chinatown's old eateries have a diner aesthetic with counter seating. They learned that due to the Chinese Exclusion Act, men couldn't bring their families from China. Bar seating allowed them to eat full meals by themselves, instead of in the more typical family style.

The ongoing construction of the Central Subway, which will add a terminal in Chinatown, has resulted in a loss of revenue for businesses in its path, and rising concerns for the character of the area. "What is it going to look like after the subway opens? ... Are new people going to come in and want different types of things in Chinatown and are willing to pay higher rents? That's an issue that we're watching and concerned about," Gee said.

In Boston, Angie Liou, executive director of Asian Community Development Corporation (ACDC), says Chinatown is being hemmed in from all directions by market-rate developments. "This is a capitalist country. So when the real estate market is hot, it goes quickly in the matter of a few years," she said." The developments drive up property values. "Some people might think, 'That's a bad thing?' What you have to know about Chinatown is that the vast majority of long-term residents are renters," she said. "Home ownership is very, very low here, so when you're talking about renters and property values going up, that's to their detriment." While ACDC can build affordable housing units, those projects take a long time. 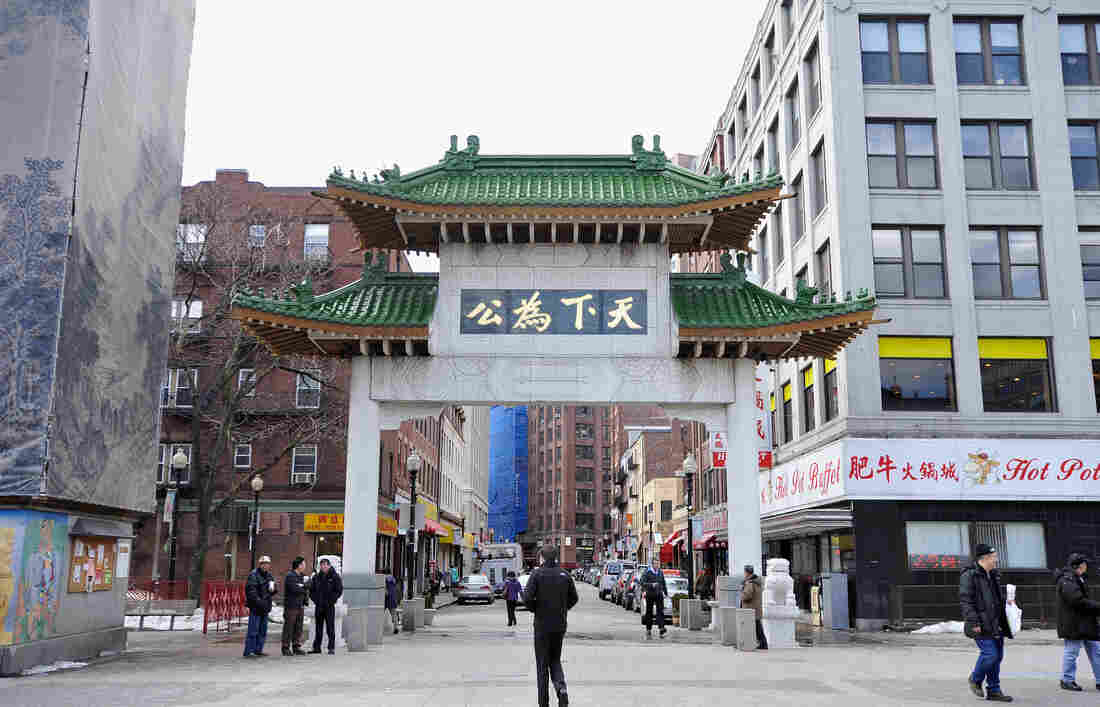 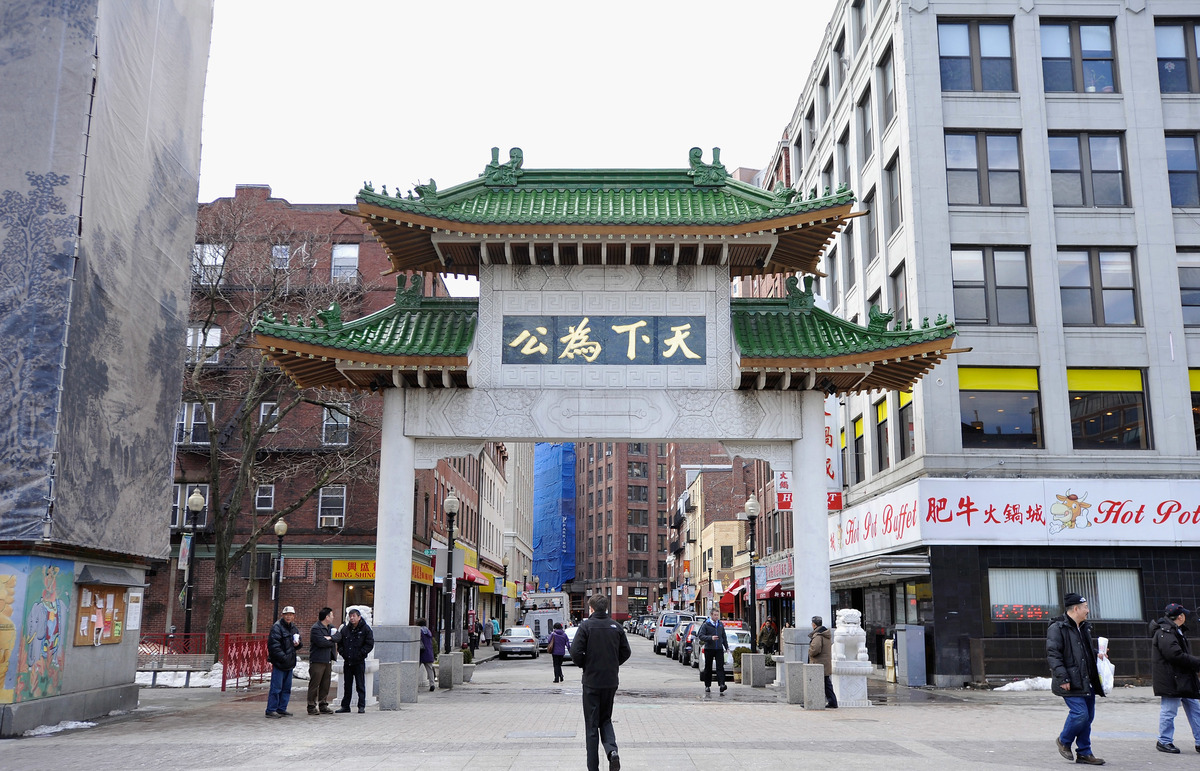 A 2016 report found that the median rent in Asian American Pacific Islander (AAPI) neighborhoods increased by 74 percent from 2000 to 2014, compared to the national median rent increase of 53 percent. The report was jointly produced by the National Coalition for Asian Pacific American Community Development and the Council for Native Hawaiian Advancement.

Giles Li is executive director of Boston Chinatown Neighborhood Center (BCNC), which is charged with opening an arts center in a new mixed-use development. This community space will offer programming for residents, old and the new. "There's nothing I can do to slow macroeconomic forces, but maybe if we can get the new residents of Chinatown engaged in this community as residents and as members of this community, maybe that will mitigate the negative impact of gentrification," he said.

Peter Kwong, the Hunter College professor, believes it may be too late for many Chinatowns.

Most Chinatowns are no longer truly vibrant immigrant communities where people work, live, shop, and socialize, he said. "By and large, the people have scattered and working-class Chinese tend not to concentrate in areas like these because there's very few jobs." New York City's Chinatown is the one exception because of a large base of jobs, he said. "We are basically the very last stand," he said of anti-gentrification efforts in New York's Chinatown. 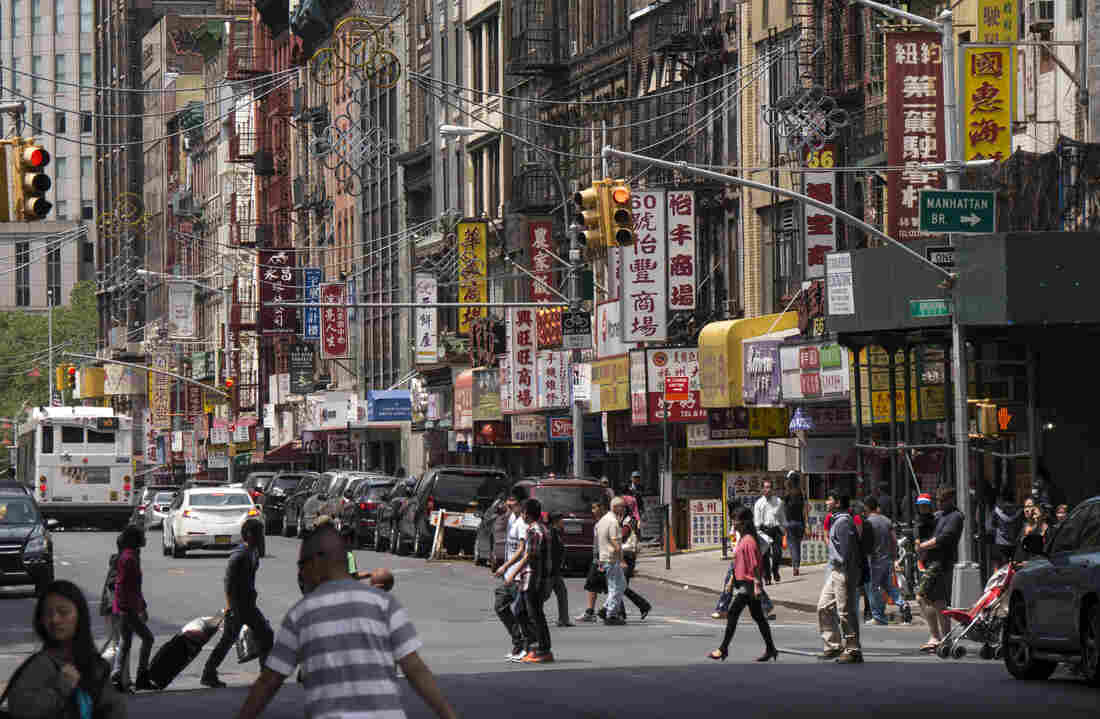 Kwong criticized mixed-income developments as contributing to gentrification. "Even though they may add units, they're still introducing affluent people into a low-income neighborhood," he said. He also questioned the value of arts and culture efforts. "After you see a show, what do you do? What do you do about these people driven out? ... You're an artist? These are the things you do? Okay. But don't tell me you are doing something significant in terms of social impact," he said.

Liou thinks interactive arts and culture events such as ACDC's popular outdoor film screenings give residents the opportunity to talk to each other. "I don't think they necessarily understand that there may have been other residents who have been displaced from where they were living, which is not a comfortable conversation, I realize," she said. "I think that's the first step toward some sort of understanding and empathy."

But Kwong argues that the best way to halt displacement is through rezoning and laws that protect tenants. For the past eight years, the Chinatown Working Group, a coalition of more than 50 organizations and residents, has worked on a rezoning plan that would restrict height limits, create anti-harassment laws targeted at landlords, generate affordable housing, and protect small businesses in Chinatown and the Lower East Side. The Department of City Planning has rejected the plan, but advocates are not giving up. They continue to hold demonstrations on a regular basis outside City Hall to call attention to the issue. 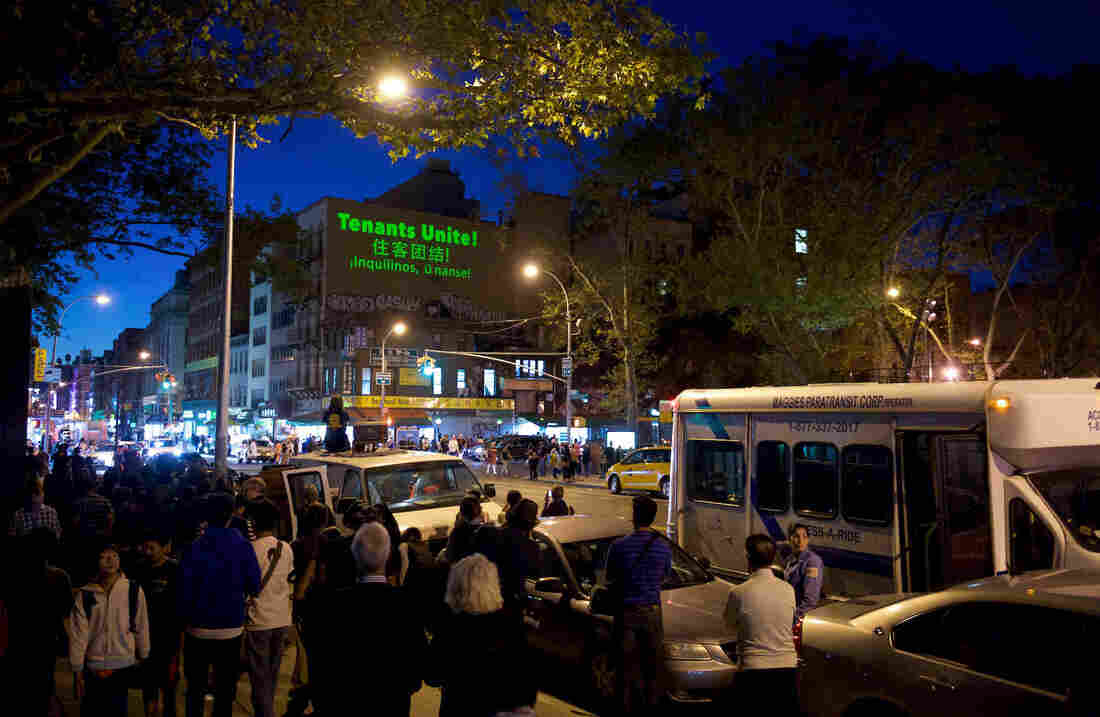 An evening projection from the Chinatown Art Brigade, in partnership with The Illuminator, at the corner of Grand and Chrystie Streets in Chinatown, New York City, in 2016. A crowd gathered to watch the projection, including local tenants, residents and passers-by. Louis Chan/Chinatown Art Brigade hide caption

One night in September, the Chinatown Art Brigade, a collective of artists and activists, projected a series of large-scale, multilingual messages onto buildings. The messages were written by residents. "Who did you replace when you opened your gallery? Your bar? When you built your condo??," one of the projections read.