Accessibility links
This Week In Race: ICE Sends Chills Across U.S., Kaepernick, Others, Write Big Checks : Code Switch While much of the focus has been on deportations of Latinx, other groups have been under increased scrutiny. 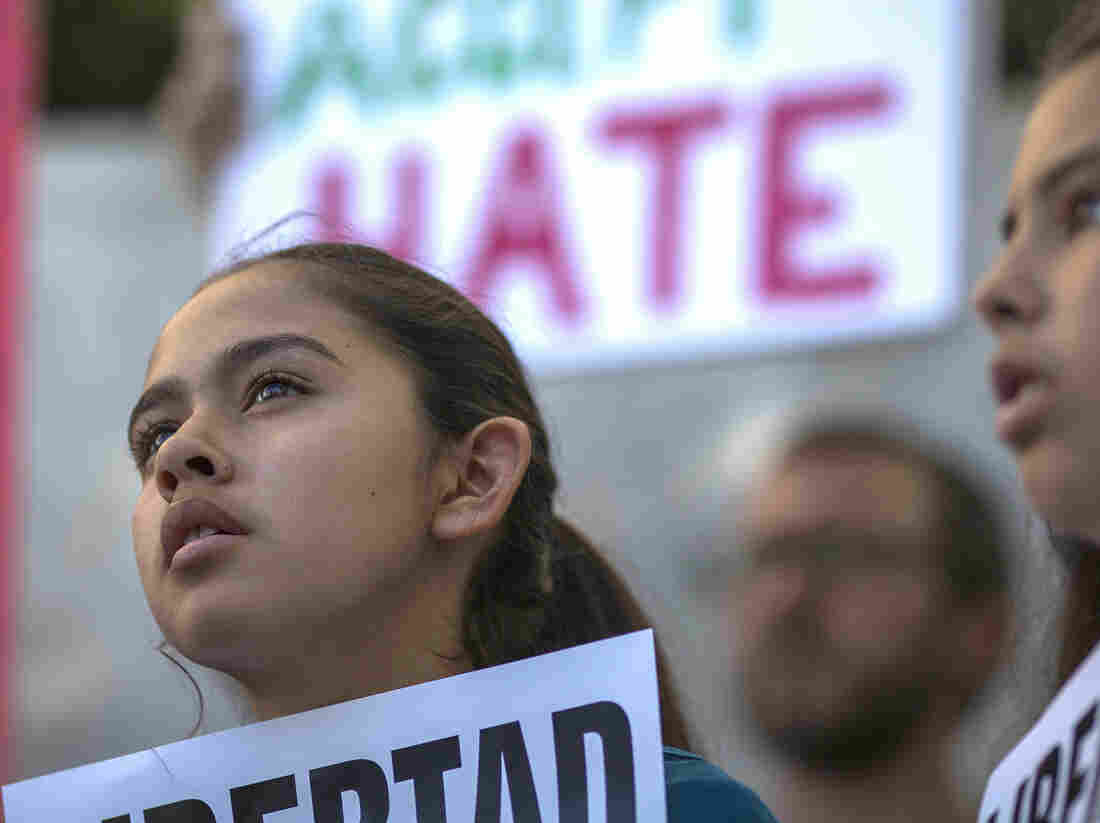 Fatima Avelica, 13, daughter of of Romulo Avelica-Gonzalez, attends a rally with loved ones and supporters for his release outside U.S. Immigration and Customs Enforcement (ICE) offices on March 13, 2017 in Los Angeles, California. David McNew/Getty Images hide caption 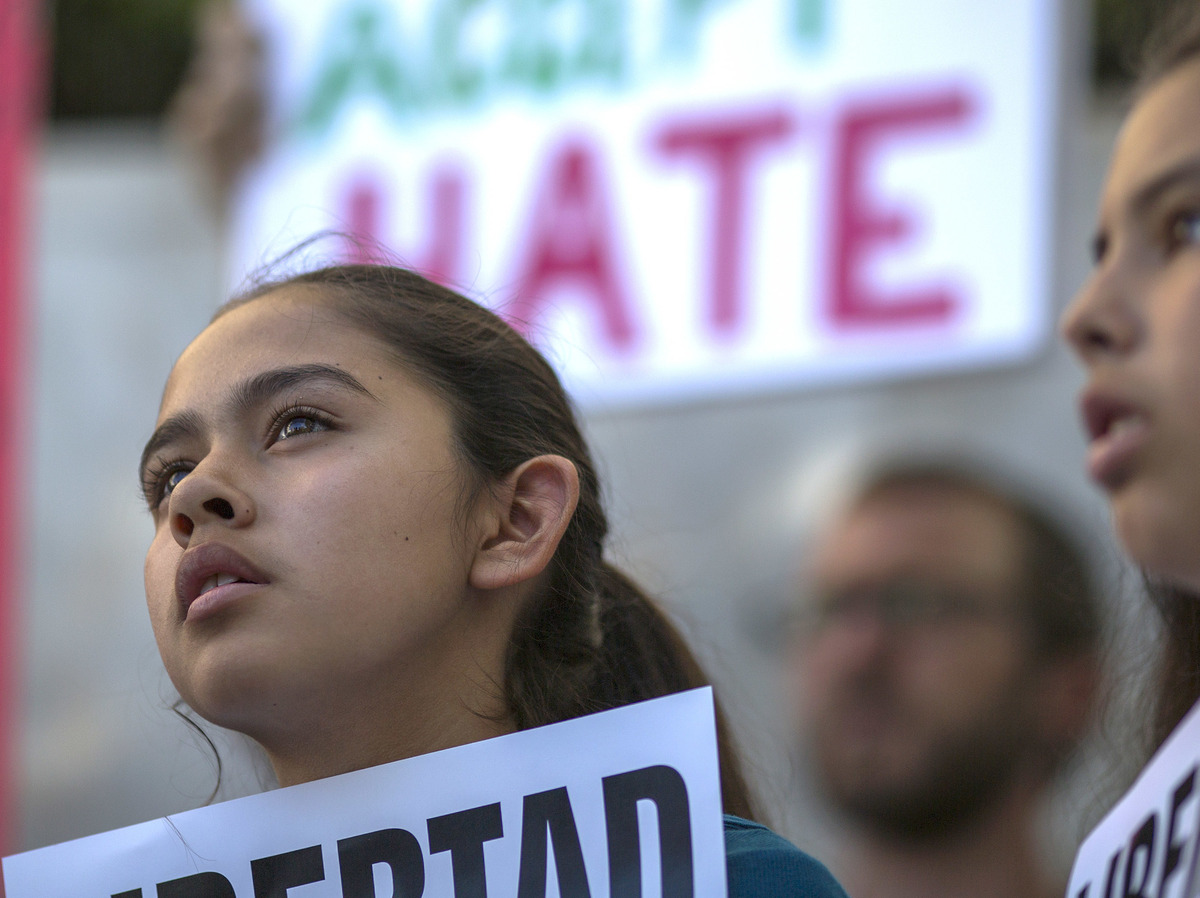 Fatima Avelica, 13, daughter of of Romulo Avelica-Gonzalez, attends a rally with loved ones and supporters for his release outside U.S. Immigration and Customs Enforcement (ICE) offices on March 13, 2017 in Los Angeles, California.

Oh people: it's been one of those weeks again.

The focus on immigration continues, as the government promises to punish sanctuary cities and cities that have chosen not to do ICE's work for it by detaining undocumented immigrants until that agency can collect them for deportation. A number of police departments, including the LAPD, have indicated widespread fear of deportation in immigrant communities has had deleterious effects on how the police do their jobs. Stories like this one just increase the anxiety.

In LA, reports from victims of sexual assaults are down 25 percent from this time last year. The prevailing theory is that victims, many undocumented (or from mixed-status families), are afraid that if they come forward, they'll expose themselves to deportation, which will separate them from their loved ones.

And while much of the focus has been on deportations of Latinx, other groups have been under increased scrutiny. The Atlanta Black Star notes black African immigrants — especially ones from countries with large Muslim populations — are also on the end of ICE's step-up.

The acceleration ignores the fact that many Africans waiting to immigrate to the States, or who are here already, have been approved for refugee status. With a new stay on refugee resettlement, though, many are now in limbo. Noting that there are about 50,000 undocumented Irish in the US, immigration activist Tia Oso says, "If this was about immigration, then the undocumented Irish and European folks would be a part of the roundups. The people being deported are from Mexico, Central America, the Dominican Republic and Haiti. So this is about keeping America white, not making America great."

Standing up for Meals on Wheels: Free agent Colin Kaepernick opened his wallet and donated $50,000 to Meals on Wheels after it was announced that the program would be severely hurt by proposed federal budget cuts.

The former San Francisco 49er has pledged one million dollars to organizations that work to help low-income and at-risk communities. He's also trying to raise $2 million in drought relief for Somalia.

Kaepernick is only the latest in an elite club of activist athletes. In The New Yorker, Hua Hsu takes a look at how recent athletes have used their fame, fortune and knowledge of social media to take political stands and/or tell us what's on their minds.

Calling all blerds: Google maybe has a l'il something for you: The San Francisco Chronicle reports Google is creating a campus-within-a-campus for students from HBCUs who are interested in Tech. Launched in partnership with Howard University, the 12-week summer program, which is being called Howard West, begins this year, with 25-30 rising Howard juniors and seniors. Next year it will expand to include students from other HBCUs.

You needed this and you didn't even know it: writer Jeff Yang and blogger Phil Yu are now on a podcast! They Call Us Bruce gives us a no-holds-barred look at what's going on in Asian America.

Episode 1 takes on Iron Fist, the new Netflix show based on a Marvel comic about a white guy who is taken in as an orphan by a group of Asian monks. A white guy who is taught by and then out-Asians his Asian mentors? It is, as Phil and Jeff point out, "problematic." (And do not get Gene Demby started on this — but listen out for him to talk about it him on a couple of weeks...)

Finally, take a listen to the Code Switch podcast, where Shereen gets into the Iranian side of her Persiarican heritage. It's for Persian New Year, which started this week. Listening will make you hungry.

Go hug a baby dog, or rescue one from a shelter. You'll both feel better. See you next week.