Accessibility links
How Latino Players Are Helping Major League Baseball Learn Spanish : Code Switch Latino players have long felt lost in translation in the minor and major leagues. How MLB is taking on this linguistic and cultural challenge. 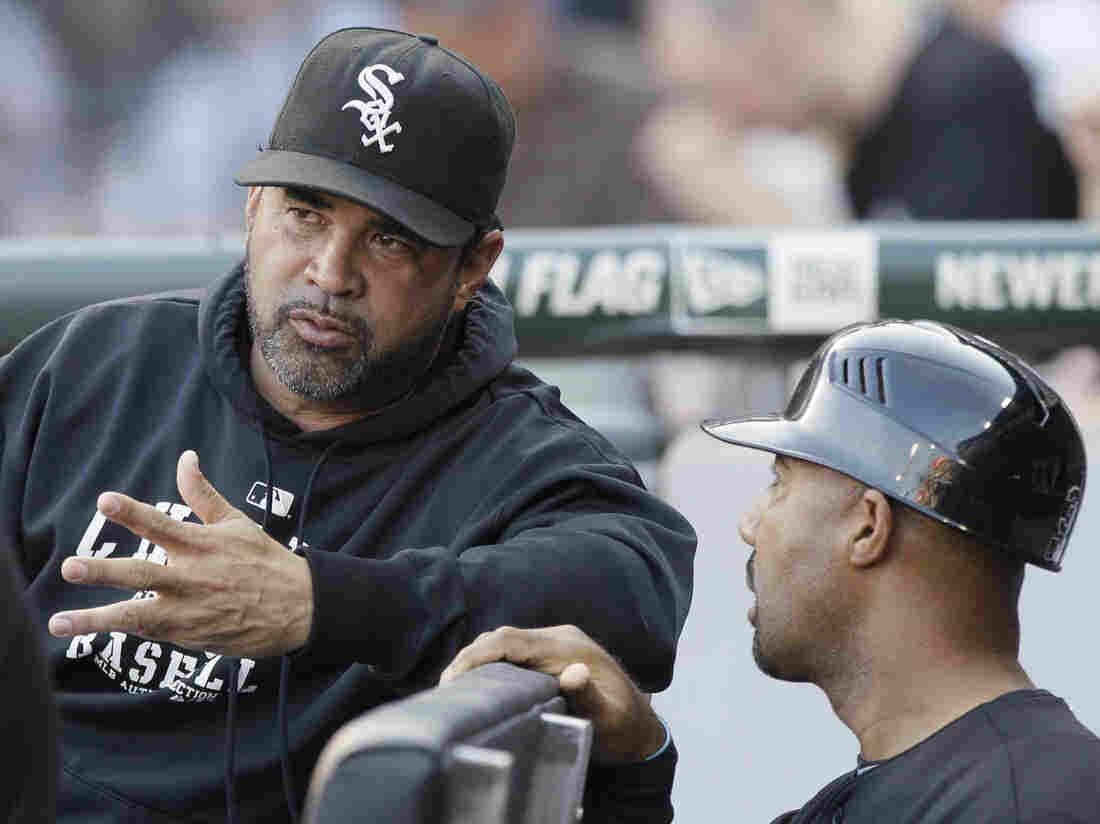 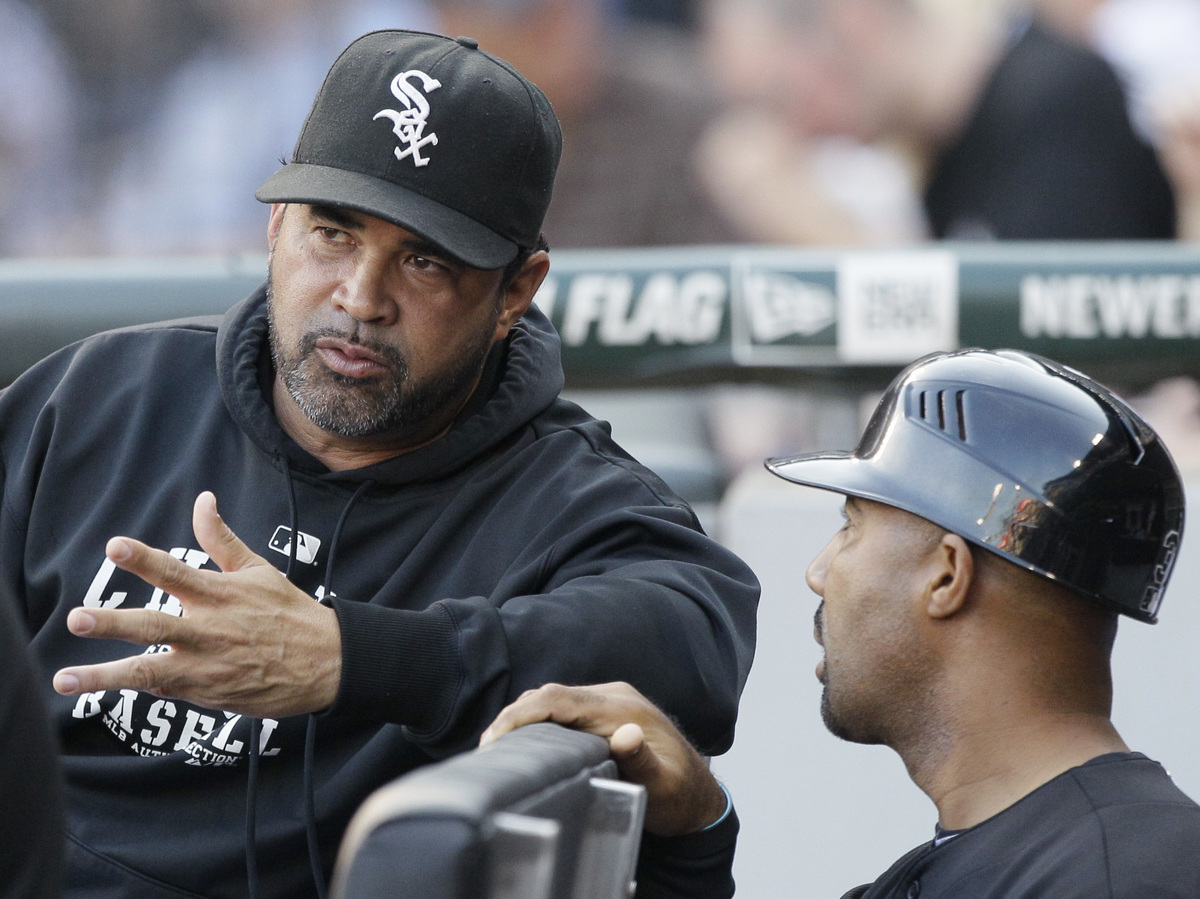 Chicago White Sox manager Ozzie Guillen, left, talks with first base coach Harold Baines in the dugout during a game in 2011.

With the start of baseball season in sight, millions of Latino fans in the U.S., the Caribbean, and Latin America will be rooting for their favorite players, many of whom are transplants from places like Venezuela, Dominican Republic, and Cuba. But Spanish-speaking fans, millions of whom watch Spanish-language broadcasts of baseball games, will have little idea of the lingering challenge some Latino players in the States have long faced: inadequate language support from the minor and majorleagues.

Much of the issues surround the inability of the Latino players to meaningfully communicate with the press. This can be the result of simply not speaking each other's language, a barrier in how cultural norms affect the use of language, or from poor reporting on Latino players.

One such incident of lackluster coverage happened last year when Brian T. Smith from the Houston Chronicle wrote an article on the struggling performance of Carlos Gómez during his season with the Houston Astros. Gómez, born in the Dominican Republic, speaks English, but not with native proficiency. When Smith quoted Gómez as saying, "For the last year and this year, I not really do much for this team. The fans be angry. They be disappointed," the mangled language sparked a backlash about how the media can sometimes cover players in a way that demeans their intelligence or leaves them embarrassed.

Adrian Burgos Jr., a professor at the University of Illinois who specializes in Latino and sports history, says there is a history of English-language media being insensitive in the coverage Latino players have received in the past. "The practice of poking fun at the accents that Latino players used has been a traditional exercise of the English-language press," Burgos said. He says they tend to highlight the accents and fail to adequately convey the ideas that Latino players are trying to express.

When the backlash against Gómez quotes began, freelance writer Britni De La Cretaz wrote an article pointing to the lack of diversity in newsrooms as contributing to the lack of sensitivity from both Smith and the editors who did not address the grammatically-poor quotes before publishing the article. De La Cretaz pointed to The 2014 Associated Press Sports Editors Racial and Gender Report Card which concluded that more than 91 percent of sports editors and 85 percent of reporters are white.

"For me, what's important is talking to journalists in the community and trying to make sure that I am respectfully representing people," De La Cretaz, who does not speak Spanish, said about covering these players. "I think the responsibility there lies with newsrooms and that's kind of part of the problem, too," she said. "Since I'm a white writer, who is writing and my editor is a white editor there's a huge blind spot there."

According to the 2014 AP report, there has been an increase in people of color in sports newsrooms, but most of the progress can be attributed to the diversity found at ESPN. For instance, if the male columnists of color employed by ESPN were removed from the total number of sports staffers at the over 100 newspapers and websites AP reviewed, the percentage of columnists of color would drop from more than 17 percent to three percent.

Significantly, ESPN has dedicated major resources to its Spanish-language viewers and, by extension, to the coverage it gives Spanish-speaking athletes in general.

Freddy Rolón, vice president and general manager at ESPN Deportes, oversees the network's business and television's more than 4,500 live hours of Spanish-language content every year. "When we look at the marketplace for the Hispanic audience, we see actually growth in both the English side and the Spanish-language side. And we're seeing a big growth in the overlap as well with the bilingual audience," he said.

Rolón points out that while the bilingual market is growing, Latinos tend to gravitate towards the Spanish ESPN Deportes network for sports like fútbol, soccer, and English ESPN for American football despite the complex overlap in the bilingual audience. That, Rolón says, is the result of each English or Spanish side of the network having cultivated more expertise through a longer history of covering the two different sports.

But covering baseball is complicated, in large part because of its astronomical popularity in and equally important fan bases in the U.S. and Latin America. "When you speak about baseball, it speaks to Latinos on both sides of their being," Rolón said. "There's a question of identity and how that is mixed between your country of origin and the country that you are part of and you live in. That is very much a fabric of baseball."

Rolón says when ESPN Deportes launched in 2004, they found a "huge void" at the intersection of Spanish and baseball that was not being filled. This gap in Spanish coverage led ESPN to realize there was an opportunity to get that coverage from the reporters to bleed into the English programming. "By getting more candid conversations with the players, by letting them open up a little bit more because we're talking to them in their native languages, we got better stories and we were better at serving fans because we could tell them things they might not have heard if they were just looking at it from an English-language lens," Rolón said. 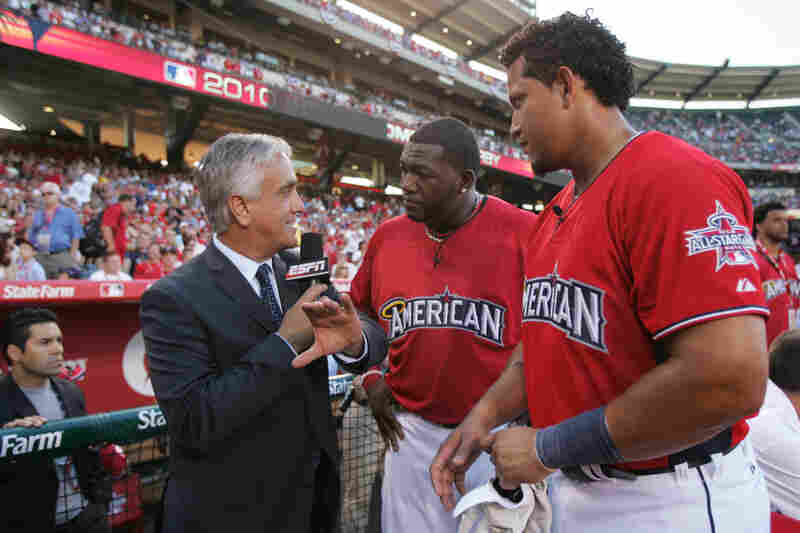 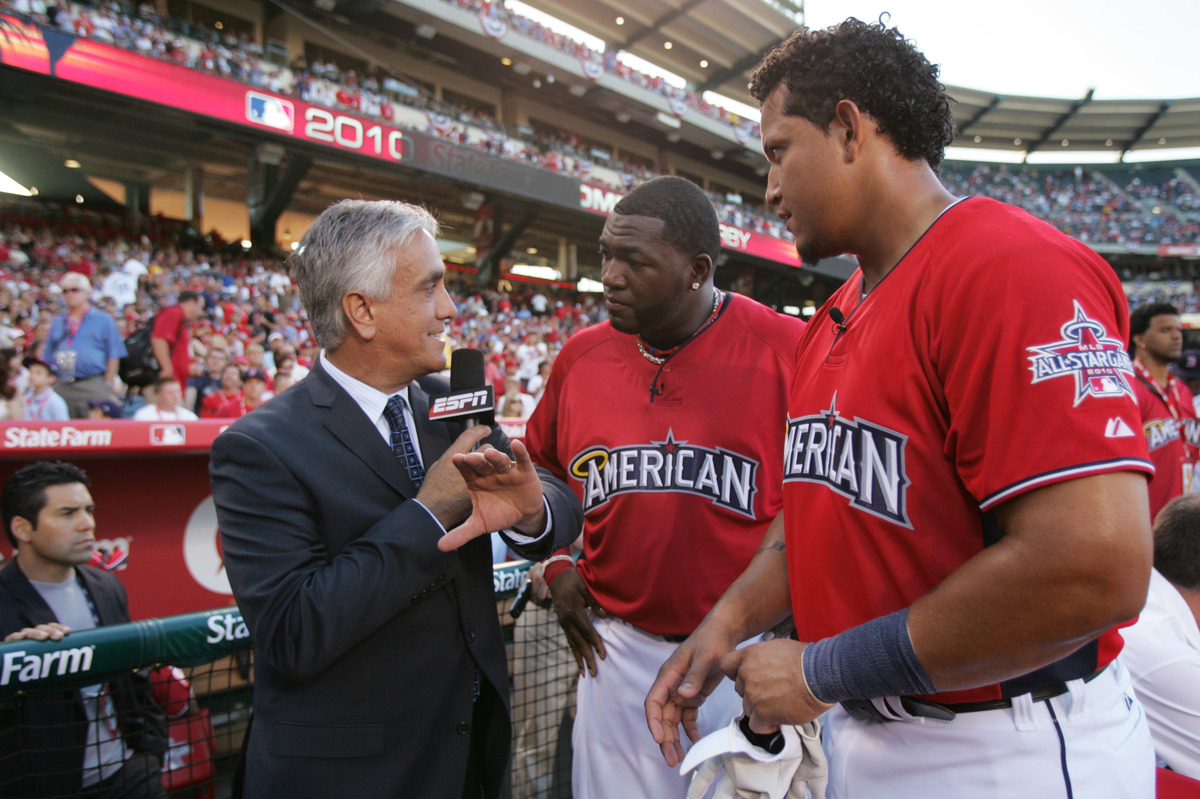 ESPN's Pedro Gomez, a bilingual journalist who has covered baseball for more than 20 years, says covering the players in two languages has improved the reporting and how the players express themselves. "I remember when I started back in the late '80s, early '90s, I can't think of another bilingual reporter that existed on the baseball beat," Gomez said. "And now you walk into a club house and there are more and more bilingual reporters covering Major League Baseball." While there are more bilingual reporters, Gomez says he would not go as far as agreeing that Spanish-speaking players are not comfortable enough to approach the press more readily today than in the past.

For the 2016 season, MLB mandated that all teams provide interpreters for players with limited or no English proficiency. Foreign-born Latinos made up a quarter of the players on opening day of the 2016 season and come from countries where English proficiency may be limited and Spanish is the primary language. Gomez believes interpreters are a step in the right direction. "Players used to have to grab a coach, a teammate who spoke both languages and kind of use them as a translator and of course these people weren't trained as professional translators," Gomez said.

Paul Mifsud, an MLB vice president and deputy general counsel, says the interpreters the teams are required to hire, which are subsidized by the league and included in negotiations with the players union, will be in place for the next five years. "There was initial skepticism about the value of it, but at this point all teams, I think, have really bitten into it and find it extremely useful," Mifsud said. "It's really started to improve the communication dynamic in the clubhouse and the ability of the players who may have felt uncomfortable talking to the media."

Ozzie Guillén, former White Sox shortstop and manager, said there has been improvement but there is much still needed to help Latinos when it comes to language. "Baseball [has] improved a lot, but it's hard right now to speak the language because you don't need to," Guillén said. "Some players think, 'If I produce, I don't need to speak English and they have to figure [it] out to understand what I'm saying.'"

Guillén also joked that when you're good you don't need to learn English, but if you're not you had better learn English. However, he did say it was important that players learn English. But he added that a language barrier is accompanied by a cultural barrier in how that language is used: what is being said and how it is interpreted by the public. Guillén says that gap in cultural translation landed him in trouble because what is appropriate in Spanish and his culture might not be perceived the same way in the U.S.

In one instance Guillén received backlash while managing the White Sox for saying it was unfair for Asian players to be given interpreters while Latinos were left without them. In 2010, USA Today reported him as saying:

"Very bad. I say, why do we have Japanese interpreters and we don't have a Spanish one. I always say that. Why do they have that privilege and we don't?" Guillen said Sunday before Chicago played the Oakland Athletics. "Don't take this wrong, but they take advantage of us. We bring a Japanese player and they are very good and they bring all these privileges to them. We bring a Dominican kid ... go to the minor leagues, good luck. Good luck. And it's always going to be like that. It's never going to change. But that's the way it is."

There was a divide in the media over what Guillén said and how it was interpreted, leading to friction between him and the MLB.

While there were some interpreters before the 2016 requirement was put in place, they were not mandated by MLB and were hired at the discretion of the teams. With just a handful of Asian players in the league and on different teams around the country, coaching staff and fellow players were not readily available to translate.

This generalized "lost in translation" effect is being addressed by MLB with acculturation and language lessons to Latino players while in minor league teams. "Players who are going to be successful major leaguers for many years, there's obvious advantages to having those players be bilingual and not just speak Spanish," Mifsud said.

Guillén agrees that there are missed opportunities for Latino players to take up leadership roles because they cannot be outspoken about what they feel and think. That, he says, is a reason some great Latino players never become managers or join a team's leadership ranks. Guillén says learning English and acclimating to U.S. culture is most important for young players in the minors who have less money and support, both on and off the field. During the 2016 Minor League Baseball season, Latinos accounted for more than 41 percent of the players.

While long overdue, MLB's plan to improve language services and cultural acclimation, and the press's continued efforts to more accurately cover Spanish-speaking players should result in players feeling more at ease with the press and their fans, and fans gaining more access to and insights into their favorites.

Jorge Encinas is a freelance journalist based in Tucson, Ariz., and former intern with the Code Switch team. Follow him @jencinas9.

A previous version of this story incorrectly referred to Paul Mifsud as Phil Mifsud.