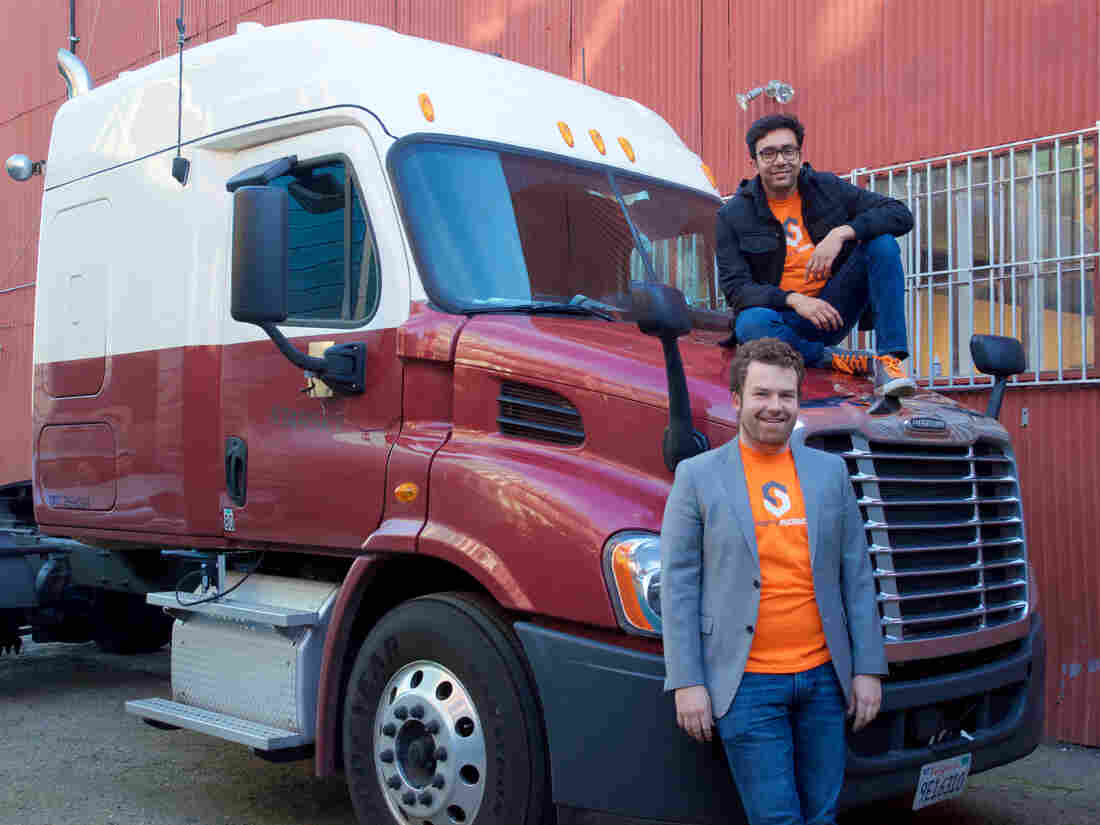 Starsky Robotics is retrofitting large trucks to make them driverless. The startup hopes that by the end of the year, it will be able to operate a truck without a person physically sitting in the vehicle. Courtesy of Starsky Robotics hide caption 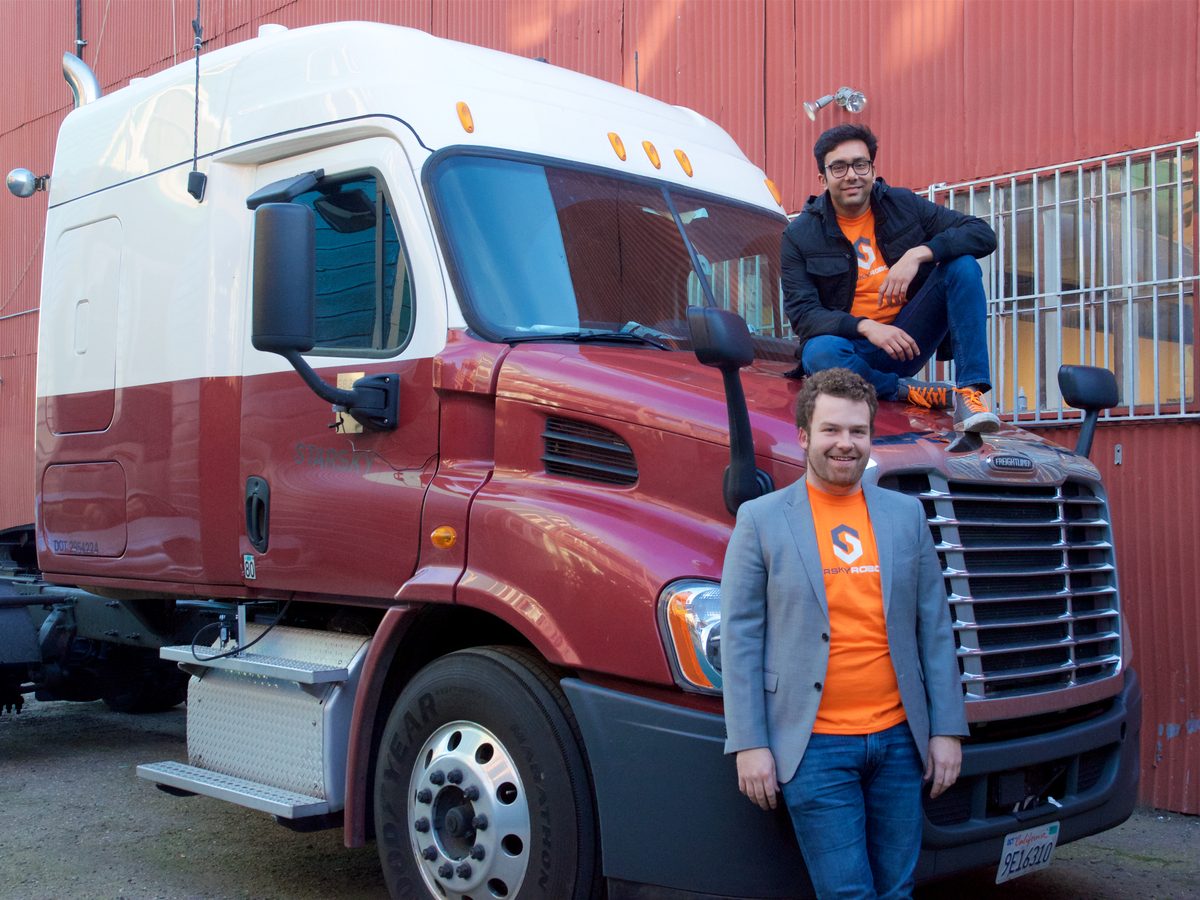 Starsky Robotics is retrofitting large trucks to make them driverless. The startup hopes that by the end of the year, it will be able to operate a truck without a person physically sitting in the vehicle.

Driverless cars could transform the way our country moves, potentially making roads more efficient and possibly saving lives because of fewer traffic accidents. But for all the benefits of a driverless future, this next-generation transportation is threatening the livelihood of America's professional drivers, including scores of people of color.

New research from the Center for Global Policy Solutions shows about 3 percent of all workers in the U.S. are in driving jobs. Truck, delivery and tractor drivers are still the most common jobs in most states. The study, supported by the Ford Foundation, found that while 62 percent of the nation's 4.1 million driving jobs are held by white Americans, many African-Americans, Latinos and Native Americans rely on them since the median annual wages they earn are higher than in nondriving jobs.

"These are important living-wage, if not middle-class jobs for people of color," said Maya Rockeymoore, president of the Center for Global Policy Solutions. "If these jobs go away, you've got a significant percentage of the African-American workforce [4.23 percent] who would be negatively affected."

How Offering Driver Licenses To The Undocumented Makes Roads Safer

But technology and transportation companies are actively developing autonomous alternatives for everything from delivery trucks to taxis.

Rockeymoore believes that while policymakers are thinking about automation in terms of safety and innovation, they are not paying enough attention to how it will affect the labor market.

"We don't necessarily think that standing in the way of automation is the answer," Rockeymoore said. "At the same time, there needs to be a focus on strengthening the social insurance and safety-net systems in our nation to make sure workers and their families don't fall through the cracks."

Some professional truck drivers remain more optimistic and skeptical that their jobs are at risk.

Charlton Paul Jr., an African-American UPS Freight driver based in New York state, says he has had a "rewarding career" in professional driving that allows him to put his kids in college. Paul, who is also an industry ambassador for the American Trucking Associations, says he welcomes technology but sees it as complementary to his skills as a driver. "You always have to have that human element," said Paul, who drives more than 600 miles each day. He says autonomous cars are "just a computer with four wheels and a motor."

But Silicon Valley is moving fast. One company, Starsky Robotics, is already retrofitting large trucks to make them driverless. By the end of the year, the startup hopes to operate one truck without a driver in the actual vehicle.

CEO Stefan Seltz-Axmacher says long-haul trucks can be fully autonomous while on the highway but will need to be remotely controlled by humans when off the highway at distribution centers or truck yards: "I see remote drivers being a key part of that for a long time — perhaps even forever."

Truck drivers are a part of Starsky Robotics' team, serving as test drivers, collecting data and helping design for remote driving: "All the conversation about 'get rid of all the truck drivers' [is] a lot more real to us, because they're people we know and that we care about," Seltz-Axmacher told NPR. "We are actively hiring truck drivers and having them as a part of our team. We're not a bunch of Silicon Valley nerds who look at truck drivers as some faraway, distant 'other.' "

Otto — a self-driving startup acquired by Uber — is also hoping to deploy self-driving trucks: "We don't believe that the full responsibility of being a truck driver will ever be automated, but we are focusing on automating the most dangerous and mundane parts of the job," an Otto spokeswoman said in a statement.

We've seen Uber actively testing new autonomous cars. But the company says its technology is in the early days and still requires humans in the front seat to monitor conditions and intervene as necessary. "Even when these technology issues are fixed, we believe ridesharing will be a mix for a long time — with rides provided by drivers and Self-Driving Ubers," an Uber spokesman said in a statement.

Last week, the company was under fire after releasing mediocre diversity stats for its corporate employees — although a 2015 study found more than half of Uber drivers identified as nonwhite.

Lyft, another major player in the driver market, says it will release a diversity report in the near future but that 66 percent of Lyft drivers identify as being part of a minority group. Lyft believes cars won't be fully autonomous for five to 10 years and that once they are introduced, the need for human drivers will initially increase as ride-sharing possibly becomes a cheaper option and more people may live car-free: "When autonomous cars can only solve a portion of those trips, more Lyft drivers will be needed to provide service to the growing market of former car owners," a Lyft spokesman said in a statement.

So while leading companies like Ford, GM and Tesla are moving fast in developing driverless tech, Alabama-based local truck driver Alphonso Lewis Sr. relates autonomous tech to airplanes: He would rather see a pilot sitting there when he gets on a plane.

"As a driver and as an individual, to me personally, I don't think there's anything safer than a professional driver behind a wheel," said Lewis, who is African-American and has been a driver for about 30 years. He works for YRC Freight and has been an industry ambassador for the American Trucking Associations. "If a system fails on these automated trucks, you want to have a driver there."

Vignesh Ramachandran is a freelance journalist in the San Francisco Bay Area. Follow him @VigneshR.