Accessibility links
Politics Of Respectability And A Dragged Passenger : Code Switch The politics of respectability were complicated this week when a 69 year-old Asian-American doctor was forcibly dragged off a United Airlines flight. 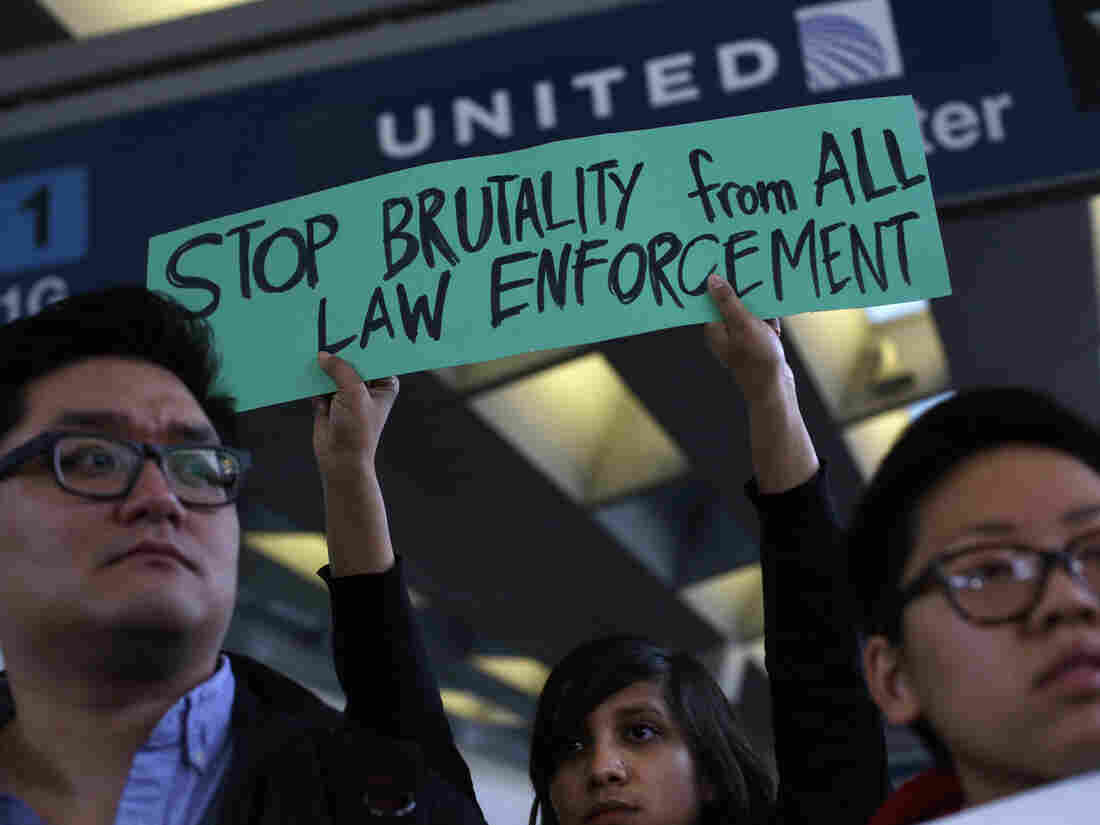 Demonstrators protest United Airlines at O'Hare International Airport on April 11, 2017 in Chicago, Illinois. The protest was in response to airport police officers physically removing passenger Dr. David Dao from his seat and dragging him off the airplane, after he was requested to give up his seat for United Airline crew members on a flight from Chicago to Louisville, Kentucky Sunday night. Joshua Lott/AFP/Getty Images hide caption 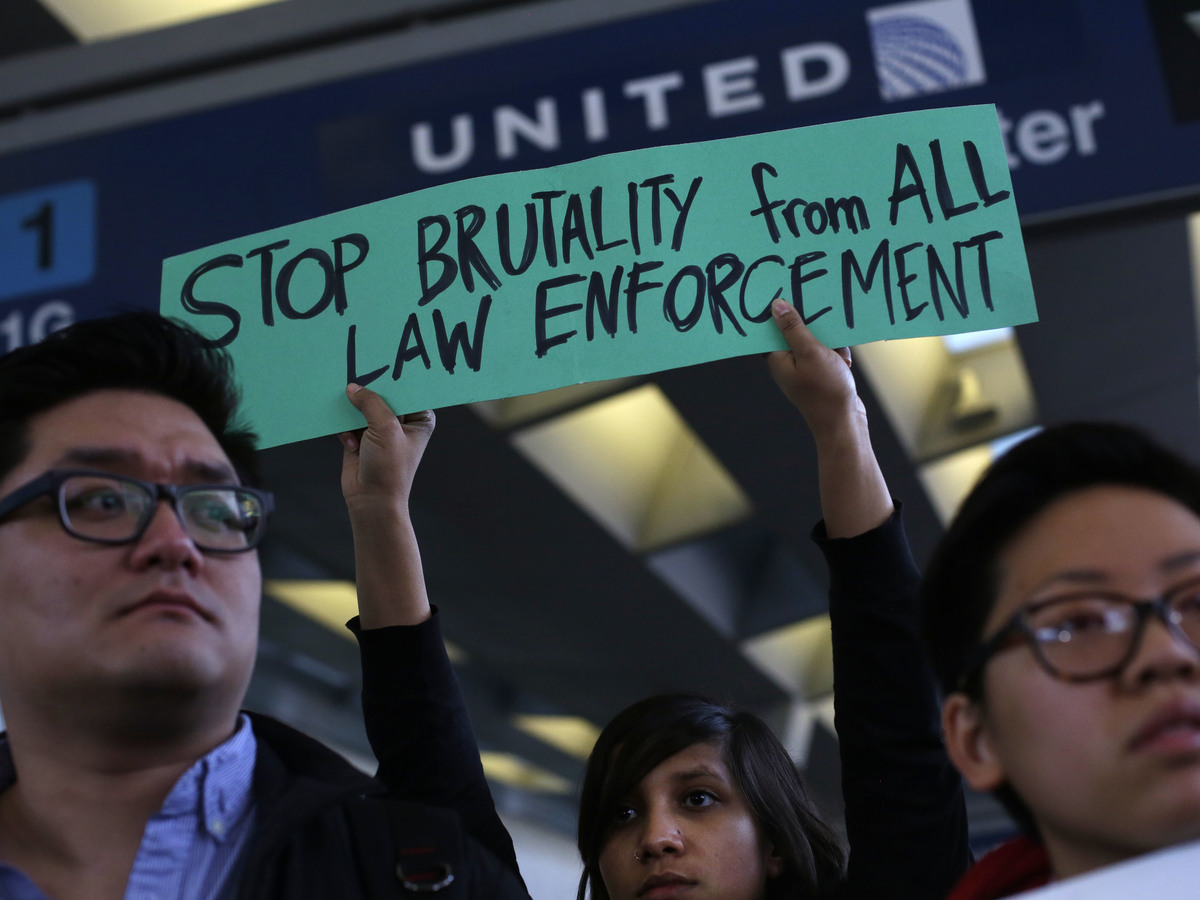 Demonstrators protest United Airlines at O'Hare International Airport on April 11, 2017 in Chicago, Illinois. The protest was in response to airport police officers physically removing passenger Dr. David Dao from his seat and dragging him off the airplane, after he was requested to give up his seat for United Airline crew members on a flight from Chicago to Louisville, Kentucky Sunday night.

The politics of respectability, that elusive set of guidelines that dictate how racialized Americans ought to conduct themselves in public, were complicated this week when a 69-year-old Asian-American doctor was forcibly dragged off a United Airlines flight.

The video of Dr. David Dao's body being hauled off the plane provoked international outrage, especially from Asian-Americans, but some argued that race had nothing to do with the incident — that the same level of outrage would have followed regardless of the passenger's race.

First, would this have happened to Dao if he was white? The politics of respectability would render a senior, white male doctor as worthy of deference and respect. Second, would cries of outrage have been as loud if the man dragged off the plane was African-American? The surge in violence against black people in the last decade, and the generalized indifference to it until recently, suggests that that would be unlikely.

In Dao, Asian-Americans like me could identify their own elderly fathers, and we shuddered at the thought that our family members could have been victimized in the same horrific manner.

But I doubt that non-Asian-Americans saw their fathers in Dao. Instead, what they may have seen is the personification of an Asian-American trope — the model minority. As an Asian-American doctor, Dao embodies the popular narrative that Asian Americans are highly educated, hard-working, committed, successful and deserving.

This facile veneer, however, obscures more than it clarifies about Asian-Americans.

Comprised of 24 detailed origins, Asian-Americans exhibit more socioeconomic diversity than any other U.S. racial group. Take educational attainment for example. On the high end of the spectrum are Asian Indians, Chinese, and Koreans who exhibit extraordinarily high levels of education, and graduate from college at higher rates than whites. At the other extreme are Asian ethnic groups like Cambodian, Laotian, and Hmong, who have higher high school dropout rates than African-Americans and Latinos. Forty percent of Hmong-Americans do not graduate from high school. In addition, the latter Asian ethnic groups have higher poverty rates and higher levels of welfare receipt than the national average.

Moreover, at 35 percent, Asian-Americans have one of the highest rates of "limited English proficiency" (LEP) among all U.S. groups, and are on par with Latinos. This figure, however, masks the heterogeneity among Asian-Americans; 53 percent of Vietnamese are LEP, as are 46 percent of Chinese, and 45 percent of Koreans and Thai. By contrast, rates of LEP are as low as 22 percent among Asian Indians and Filipinos.

These differences are critical because they affect life outcomes like health, earnings, and civic participation, including voting. The model minority trope, however, masks these differences and erases the ethnic, economic, and social diversity among Asian-Americans. More importantly, the model minority myth creates an unofficial value pyramid with the most educated, affluent and successful Asian-Americans at the very top.

So, how, exactly can the politics of respectability and diversity among Asian-Americans help us understand our collective outrage of United's inexcusable treatment of Dao?

In early news reports of this story, there was no mention of Dao's race or ethnicity. As the video began to circulate, however, one could easily discern that the passenger was Asian-American, and based on first sight, people assumed that he was Chinese-American. That Dao is a Vietnamese refugee did not diminish the outcry, nor did it change our view that he is deserving of our outrage, empathy and support. But would it change if Dao was Hmong, whose group position in the unofficial value hierarchy is lower than that of Chinese and Vietnamese?

Moreover, would we have been just as outraged and empathetic if Dao were African-American or a recent immigrant from South America?

Imagine the possibility if we were just as vociferous about the recent videotaped deaths of African-Americans at the hands of police officers, or the forced deportation of undocumented immigrants with no criminal record who are separated from their U.S.-born children. Indeed, there is outrage from certain segments of the population, but nothing that matches the immediate, unwavering, and uniform support for Dao. Even when the media began a smear campaign against him, the public rejected it as irrelevant.

Without question, Dao deserves our outrage, empathy, and support, and kudos to the masses that demanded it. But just as deserving are individuals of other racial and ethnic backgrounds, ages, and socioeconomic statuses who lack the protection of visible status markers that deny them the same degree of public respectability.

Jennifer Lee is a professor of sociology at the University of California, Irvine. Follow her @JLeeSoc.