Accessibility links
Black-Jewish Relations Intensified And Tested By Current Political Climate : Code Switch Activist ties that go back to the Civil Rights Movement are being strained by divergent viewpoints on the movement for black lives and Israel's position on Palestine. 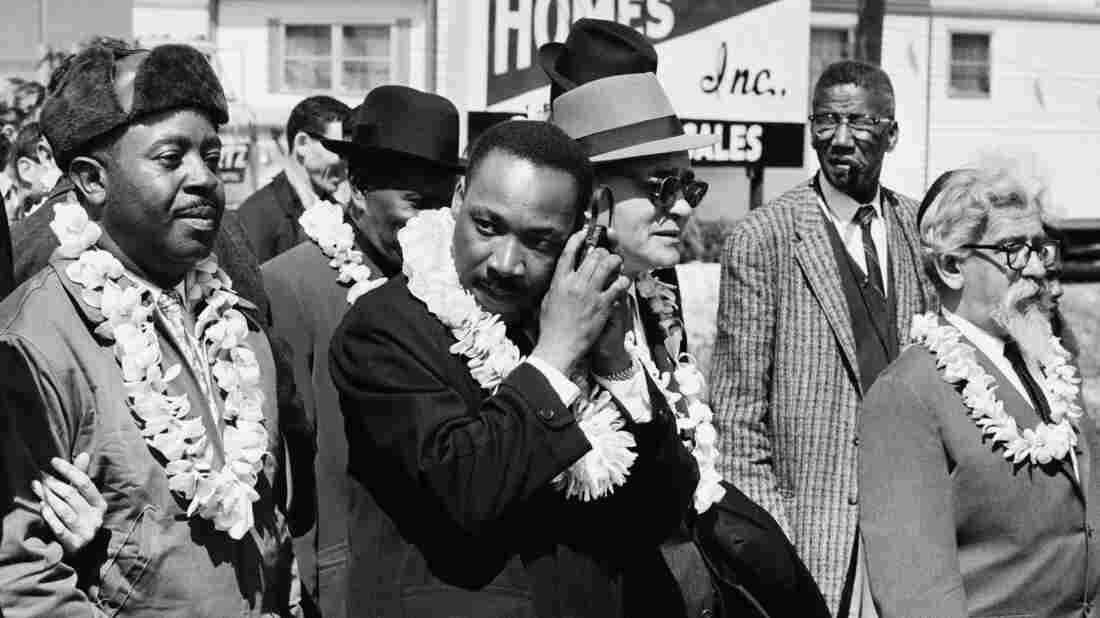 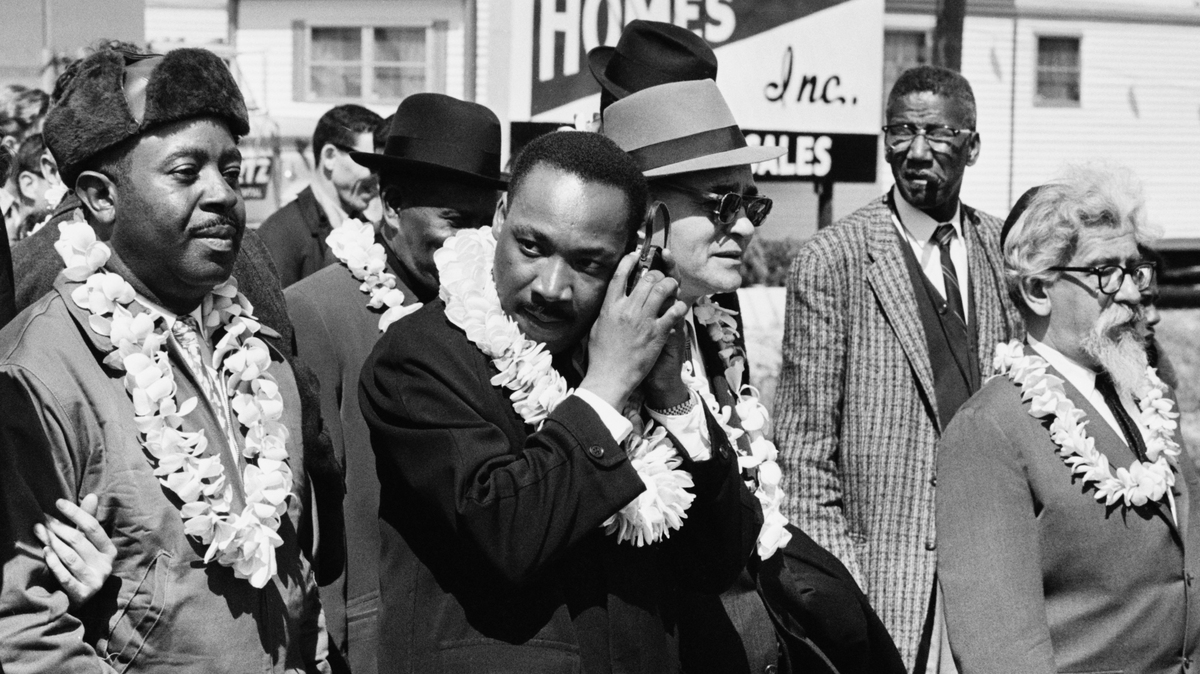 Martin Luther King, Jr. listening to a transistor radio in the front line of the third march from Selma to Montgomery, Alabama, to campaign for proper registration of black voters, March 23, 1965. Ralph Abernathy (second from left), Ralph Bunche (third from right) and Rabbi Abraham Joshua Heschel (far right) march with him.

When Jewish couple Mikey Franklin and Sonya Shpilyuk hung a "Black Lives Matter" banner from the window of their condominium, they hoped to voice their solidarity with the social justice movement. Instead, the backlash to their small act of resistance was swift. Two days later, their car was egged and toilet paper was strewn across a tree in front of their property. A handwritten message, carefully spelled out in block letters, admonished Franklin and Shpilyuk for their banner and warned the couple to "enjoy the mayhem." At the bottom of the letter was a yellow Star of David and the word "Jude," German for Jew.

With hate crimes on the rise, old coalitions between blacks and Jews are being rekindled and tested. According to a recent survey by the Institute for Social Policy and Understanding (ISPU), 57 percent of Jews support Black Lives Matter, the second highest percentage of any faith group following Muslims. Although blacks and Jews worked closely to advance social justice during the Civil Rights Movement, the strong ties between the two groups have waned since the end of Jim Crow.

But the election of President Trump has contributed to a marked increase in hate crimes, while racist and anti-Semitic attacks had already been on the rise for years. The FBI's 2015 Hate Crimes Statistics report showed that most hate crimes are racially motivated, with over half targeting African-Americans. Religiously motivated attacks rose nearly 23 percent compared to 2014, with the majority targeting Jews. Since January 2017, anti-Semitic hate crimes in New York have risen by 94 percent when compared to the same period in 2016. In March, army veteran and white supremacist James Jackson was indicted on terrorism charges after traveling to New York City to allegedly kill black men.

During the 1950s, the National Association for the Advancement of Colored People (NAACP) and Anti-Defamation League (ADFL) began to work as a united front on issues from segregation to employment discrimination. In 1965, at the height of the Civil Rights Era, Rabbi Abraham Joshua Heschel marched side by side with Rev. Dr. Martin Luther King Jr. from Selma to Birmingham. The image of the two faith leaders has been a longtime emblem of black-Jewish alliance. The story of Michael Schwerner and Andrew Goodman, two Jewish civil rights activists who were murdered in Mississippi along with James Chaney, a black activist, in 1964, is similarly notable. Their murder was the basis of the acclaimed 1988 Academy Award-winning film Mississippi Burning.

But not all Jews view this golden age of black-Jewish relations as old allies reconnecting. Ma'Nishtana, a Brooklyn-based African-American Orthodox Jewish author and educator, believes this common narrative is a "romanticized and inflated revisionist history of how involved the Jewish community was during the civil rights era." Cheryl Greenberg, a history professor at Trinity College, also holds the view that Jewish support for civil rights wasn't entirely noble. "The meeting of the minds regarding the civil rights agenda emerged from a clear, explicit self-interest. Jews realized that their self-interest rested in making sure that the United States didn't discriminate against anybody. History showed them that if anybody went first, Jews were sure to come next."

The closeness of the black and Jewish groups was not only a product of common moral and ideological beliefs, but also a function of proximity. Today, the term "ghetto" is used to refer to a poor, urban black community, but at the turn of the 20th century, ghettos in places like Harlem and the Bronx were also home to immigrant groups and American Jews.

As Jews became more upwardly mobile, Greenberg said, "they benefitted from white privilege even though they didn't know it, and failed to recognize the structural barriers preventing black people from doing better economically. They began to push a kind of race-blind approach to society." The growing divide between the two communities was crystallized in Regents of the University of California v. Bakke, a controversial affirmative action case that marked the first time black and Jewish groups filed amicus briefs on opposite sides of the same question.

Divisions between the two groups became further entrenched as black activists embraced an anti-imperialist message and American Jews embraced loyalty to Israel, according to Marjorie Feld, a history professor at Babson College. "After 1967, when Israel began its occupation of the West Bank and Gaza, the Third World Movement began to focus too on Palestinians, and so too did some black Americans," she said.

Today, Israel continues to be a flashpoint of conflict between blacks and Jews. In August 2016, the Movement for Black Lives, a national umbrella organization encompassing over 50 organizations, released a policy platform titled "A Vision for Black Lives." The document, which touches on issues including criminal justice and education reform, also includes a statement on Israel and Palestine:

Although this position occupies only a bullet point in a brief section of the document, its inclusion has been the source of significant backlash from conservative and progressive Jewish groups alike. T'ruah, a coalition of rabbis that advocates for human rights, published a statement saying it agreed with many of the policy recommendations of the document, but objected to the characterization of the Israeli occupation as genocide. The Jewish Community Relations Council of Boston (JCRC) took it a step further by dissociating itself completely from Black Lives Matter by claiming "JCRC cannot and will not align ourselves with organizations that maliciously assert Israel is committing genocide."

Despite these fissures in black-Jewish relations, according to Marjorie Feld, a history professor at Babson College, a generational gap is now emerging within the Jewish community on questions of Israel and Black Lives Matter. "It is older American Jews, some say, who won't let go of their unquestioning Zionism, while younger Jews are far more critical of Israel." Feld's remarks reflect wider trends among American youth today. A recent Pew Research study found that millennials are the only generational cohort in which fewer than half sympathize with Israel. Over a quarter of millennials sympathize with Palestinians — the highest of any generation.

"Social change requires discomfort. Sometimes it requires us to work with people we will not agree with on every issue," said Carin Mrotz, Executive Director of Jewish Community Action (JCA). "When Jewish organizations quickly issued statements of intent to pull away from work with Black Lives Matter, the cynical part of my brain questioned how deep or authentic those relationships really were." As a social justice organization, JCA has a strong focus on solidarity work and collaborates with groups including Black Lives Matter Minneapolis on initiatives from stopping private prisons to increasing affordable housing access.

While young progressive white Jews like Mrotz have taken a stand in Jewish communities to deepen their commitment to racial justice, Jews of color have played an instrumental role in bringing together the black and Jewish communities in the face of the Black Lives Matter controversy. Jews for Racial and Economic Justice (JREJ), a New York City-based advocacy group, has helped organize Jews throughout the city, most of whom identify as white, to engage them in action for racial justice.

Leo Ferguson, a community organizer at JREJ, voices frustration at the peripheral involvement of most Jewish institutions in today's fight for racial justice. "As a Black person, I don't have the luxury of walking away from this reality, or of abandoning my Black siblings when they need me to fight alongside them for justice and freedom from fear," he said. "That commitment to our movement — to Jews of Color and Black people everywhere — is what I need from my entire Jewish community, not only when it is easy, but when it is hard."

Ferguson founded JREJ's Jews of Color Caucus, which developed a relationship with Black Lives Matter NYC in fall 2016. Recently, the two groups collaborated to plan a vigil and march for Ramarley Graham, an unarmed black teenager who was fatally shot in late March.

Yavilah McCoy, a black and Jewish teacher and activist, believes heightened visibility of black American Jews will help make black issues Jewish issues. "The more we incorporate the concerns of Jews of color in what 'the Jewish community' cares about, the faster we can create a paradigm shift that moves the idea of Jewish identity beyond just white identity," she said. "The further we get towards understanding that, the closer we are to comprehending what does racial justice and equity need to look like as an internal issue to the Jewish community."

Akinyi Ochieng is a writer and researcher studying at the London School of Economics. Follow her @kikiochieng.