Accessibility links
5 Films Look At The Los Angeles Riots From (Almost) Every Angle : Code Switch The documentaries attempt to complete the picture of what transpired in LA in 1992 after Rodney King was beaten by police, showing how the riots affected a wide swath of Angelenos. 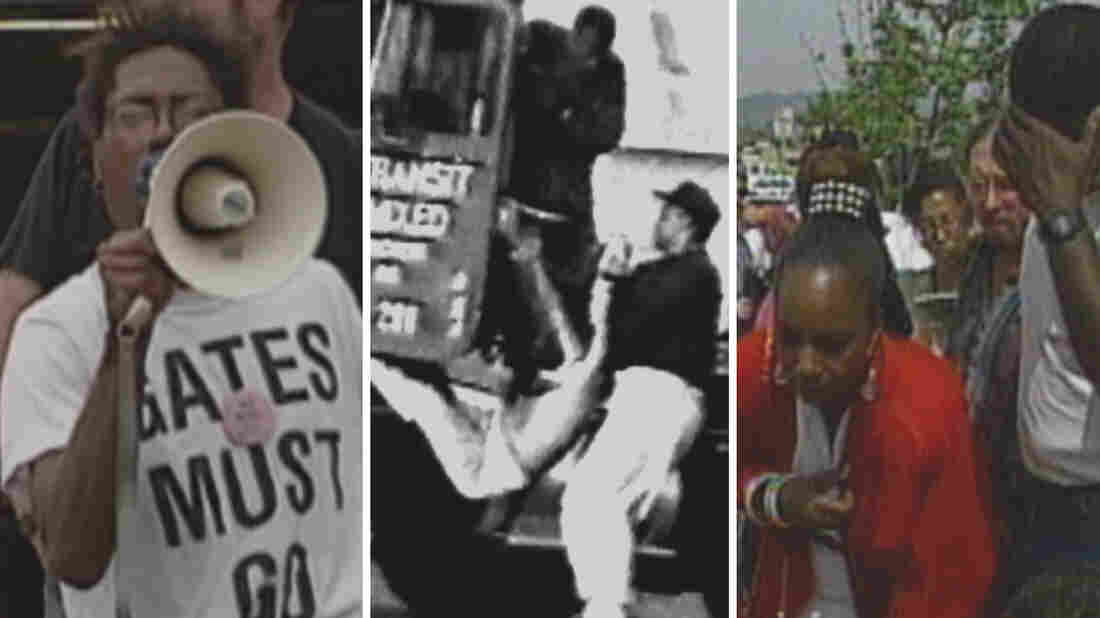 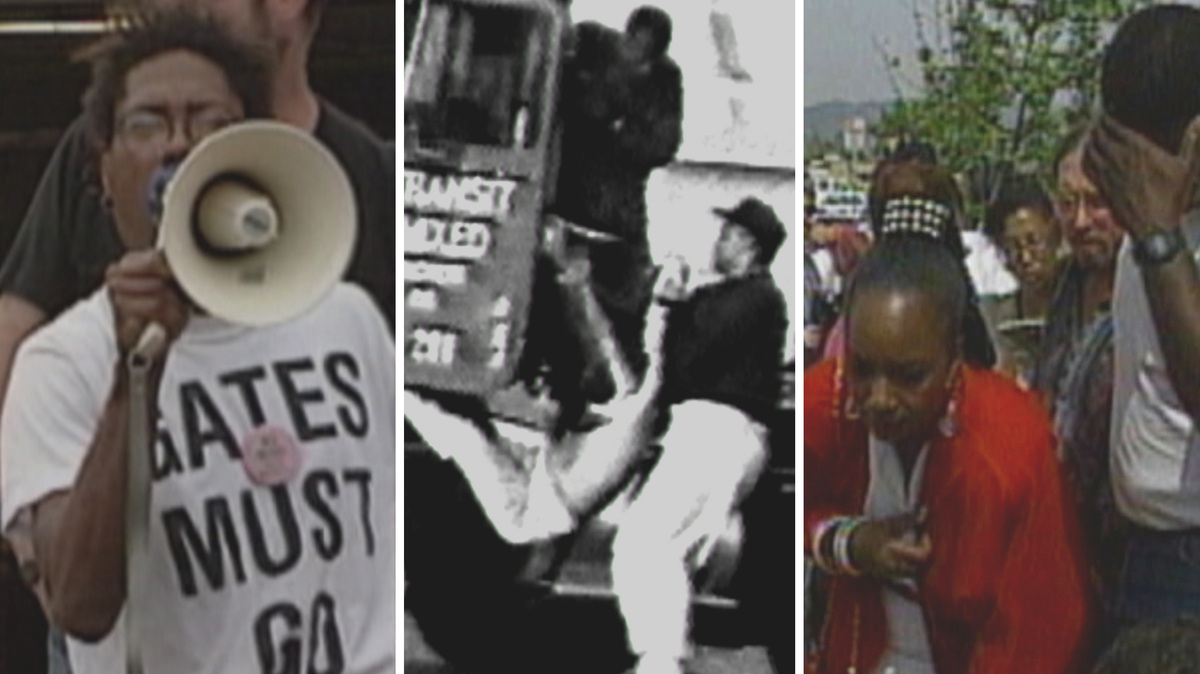 At least five documentaries will air this week to mark the 25th anniversary of the Los Angeles riots. After watching them all, I wondered what I had learned, with a quarter-century of distance since the events, that I didn't already know.

One word that keeps popping up is dehumanization. Several of the films, in different ways, highlight the long history of a mostly white Los Angeles Police Department treating black and brown people like congenital troublemakers to be contained in poor neighborhoods. That long-simmering tension helped spark days of violence and looting on April 29, 1992, that resulted in an estimated $1 billion in damages and 55 people dead.

A few of the films feel like distant cousins to ESPN's Oscar-winning documentary series O.J.: Made in America. In the same way that film traced Los Angeles' deep-rooted racial discord to help explain how O.J. Simpson was acquitted of murder charges, some documentaries suggest the 1992 events were part of a cycle of oppression, tension and explosive resistance that repeats whenever incidents of police brutality against people of color gain visibility.

Parker's hand-picked successor, Chief Daryl Gates, displays his trademark insensitivity to complaints about police brutality and racism in the Smithsonian Channel's The Lost Tapes: LA Riots. He jokes about enjoying "home movies" while discussing the now-infamous video of Rodney King's beating by several officers. Along with news footage and archival photos, The Lost Tapes includes little-seen footage of the riots captured by LA police and broadcasts from local stations like Radio Korea and KJLH, the Los Angeles station owned by Stevie Wonder.

The result is a film that often pulls you inside the riot through anguished testimony in the moment. "I can smell the fires," says one caller to KJLH as the unrest intensifies on the first night. "I'm really angry and I'm really very scared. I just spent the last 10 years of my life in college. But it doesn't really matter because even with a briefcase in my hand and suit on my back, I'm still just another nigger to the cops out there."

Like The Lost Tapes, National Geographic's LA 92 forgoes "talking head" interviews, preferring to create a more immersive experience. But without fresh context from new voices, there's not a lot that connects the events of the riots to the present day, outside of the inferences viewers might make on their own.

Showtime's Burn Motherf*cker Burn taps into hip-hop and pop culture to provide context, wedging interviews with Los Angeles-based performers like Fishbone's Norwood Fisher and rapper Yo-Yo with the words of authors, experts and current LAPD Chief Charlie Beck. Director Sacha Jenkins kicks off the film with footage of an eighth-generation white plantation owner admitting he once viewed "nigras" as "a very superior pet," before detailing how LAPD discouraged white and black people from mixing in the early 1960s by rousting patrons from nightclubs and record stores where interracial groups met.

Jenkins uses deft touches to connect the film with today's times, flashing hashtags like #preach or #alternativefacts under some archival footage to raise pointed questions and underscore perspectives he supports. One powerful moment comes when the film's story turns to 15-year-old Latasha Harlins, a black girl killed by Korean convenience store clerk Soon Ja Du after a fight in the store. Du received five years' probation for the shooting months after the King beating. The film shows increased tensions between black residents and Korean store owners by playing a clip from Ice Cube's incendiary hit complaining about — and insulting — store owners, "Black Korea," then introducing author Jeff Chang to explain how the song impacted him.

"A lot of my friends were like 'We're boycotting Ice Cube ... f*** that guy,' " says Chang, who wrote about the song in his 2005 book, Can't Stop Won't Stop: A History of the Hip Hop Generation. "But what gave Soon Ja Du the right to take Latasha Harlin's life? And who are we defending here?"

It's easy to reduce stories about the racial dynamics of the riots to black/white issues. But several of the documentaries present a clearer picture, noting that looters included white people and Hispanics along with black folks, while depicting the pain of Korean business owners who saw their stores targeted by rioters.

Director John Singleton was in the courthouse in Simi Valley 25 years ago when the officers charged with beating King were acquitted; news clips of him predicting riots back then pop up in several documentaries. Now he is executive producer of A&E's L.A. Burning: The Riots 25 Years Later, which kicks off with a roll call of the black people whose deaths in recent years have sparked protests about policing, including Freddie Gray, Sandra Bland, Eric Garner and Michael Brown.

"Who will protect us from our protectors?" intones the Rev. Cecil "Chip" Murray, former pastor of the First AME Church of Los Angeles, which was located near the center of the riots, in Singleton's film. "That is the question of America." That's also the question burning through this searing film, which features Singleton as an on-camera narrator guiding the story through a detailed, savvy chronicle of what he called "the uprising."

The creator of ABC's ambitious multicultural drama American Crime, John Ridley, offers Let It Fall: Los Angeles 1982-1992, a documentary with a similar narrative approach as his dramatic series: using a multitude of different perspectives to present one take on an issue, only to flip the script sometime later.

Ridley tells us the story of the LAPD's historic friction with the city's black community by describing the history of the chokehold. Officers in the early 1980s used chokeholds to subdue suspects who were under the influence of drugs. But the tactic could lead to deaths, predominantly those of black arrestees. Ridley tells the poignant story of 20-year-old James Mincey Jr., whose death in 1982 led to pressure to abolish chokeholds and instead use metal batons to subdue suspects. Which was the same tactic used on King.

In another scene from Let It Fall, Ridley tells the story of then-LAPD officer Lisa Phillips. She was on duty during the riots and rushed with her partner to answer a call, violating orders to stay out of the area. Afraid she might not make it back home that night, Phillips made a heartfelt revelation to her fellow officer as they headed to the scene.

"I said, 'Partner, look, I'm gay. You probably figured it out, but I'm coming out to you,' " she says in the film. "'I've got a lover. Will you call her if something happens to me?' And he said, 'Don't worry, partner. I got your back.' " That moment, presented after many scenes documenting the LAPD's racial insensitivity, humanized the officers' perspective in an unexpected way.

Aside from the issue of dehumanization, each documentary also tackles the idea of rioting as resistance. And no film hits that note harder than Singleton's L.A. Burning, which shows several South Central Los Angeles residents lionizing the men who nearly beat motorist Reginald Denny to death.

Denny was a truck driver who was pulled from his vehicle, beaten and robbed while trying to drive through the riot. But while some were horrified by the attack, L.A. Burning presented a different view from South Central residents, who called the four men prosecuted for beating Denny neighborhood heroes. "If you ask anybody around here ... they would say what they done to that man was wrong," said one resident. "But I think it was time for that. ... The people will only be suppressed for so long until they lash out."

Most curiously, King isn't fleshed out much as a character in many of these films. King, who died in 2012, appears in news footage and snippets of past interviews; Singleton's film provides more background through interviews with his brother and his fiancee (who, curiously, served as a juror in his civil suit against the officers who beat him). But the man whose assault by a crowd of cops after a high-speed car chase made him a historic example of police brutality almost seems a secondary player in the larger story.

The themes at hand in these films include the larger sweep of history, combined with the gritty details of how the riots affected a wide swath of Angelenos. In most of these stories, King is the catalyst and a bystander; the footage of his beating that swept across the world to become the first viral video of police brutality was recorded and distributed by someone else. When the riots began to reach across parts of Los Angeles, King's plea for peace during a press conference — including the line "Can't we all just get along?" — became a symbol of plaintive powerlessness.

Across the five films, King's assault triggers a response from locals that forces the rest of the city — and the country — to pay attention. Within that narrative, he emerges as another struggling brother caught up in the teeth of a supremely flawed, often racist, system of law enforcement.

What I learned from these films today that I couldn't have known just after the riots in 1992 is that 25 years' time hasn't been long enough to break the cycle. Even as advances in technology allow viral videos of black people gunned down by police to fill up social media, the same pattern of anger over police brutality translating into violent unrest has continued.