Accessibility links
'It's Not Your Grandfather's LAPD' — And That's A Good Thing : Code Switch In the past five years, the issue of policing — how it's done, whether it's equitable, what happens when deadly confrontations occur — has become more urgent than ever. 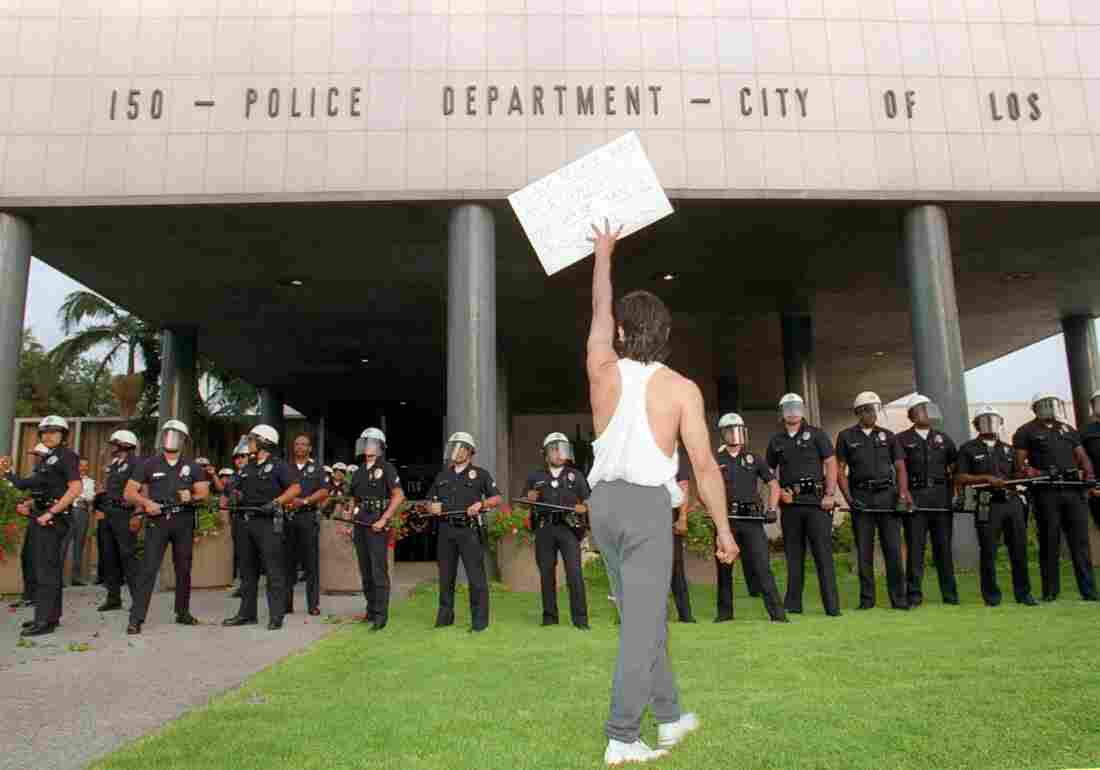 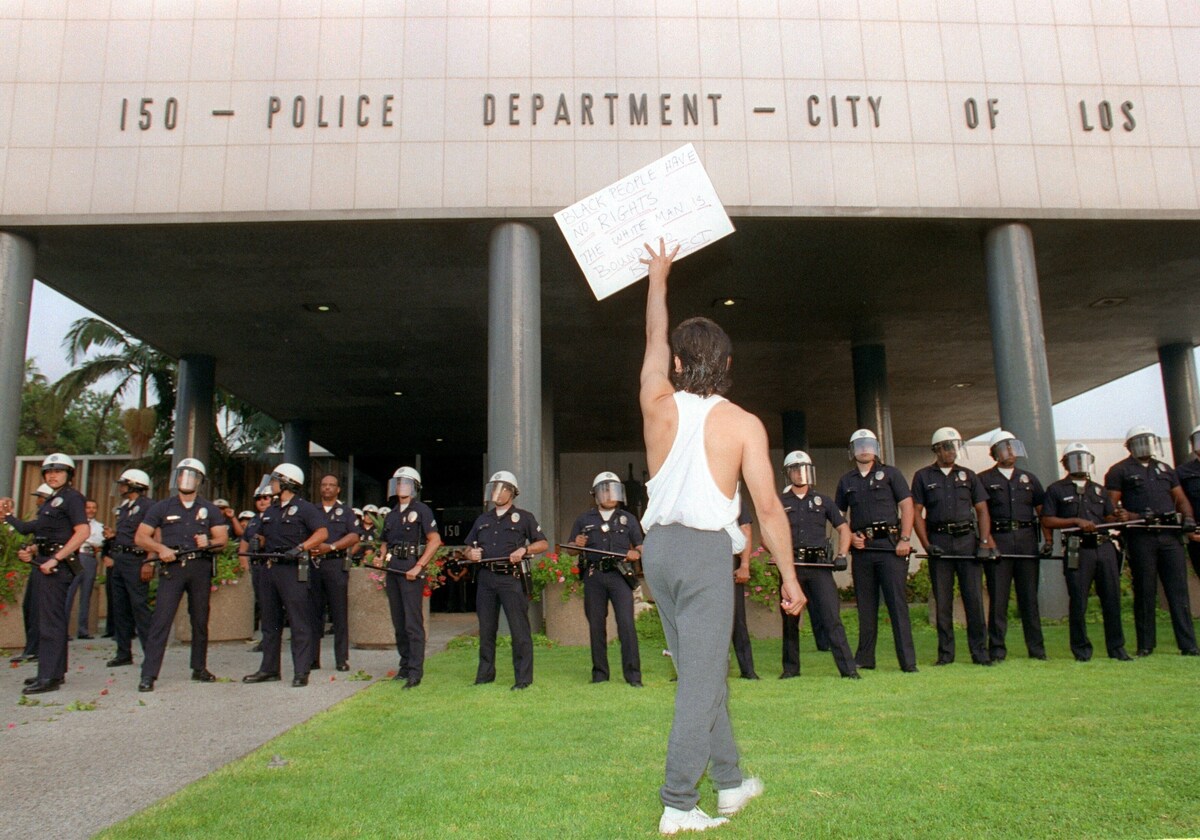 Be honest: You're looking at this story thinking what else is there to add to reports on the 1992 riots that rocked LA, right? NPR has done anniversary retrospectives before, including a huge look-back on the 20th. But in the past five years, the issue of policing — how it's done, whether it's equitable, what happens when deadly confrontations occur — has become more urgent than ever. And what happened in Los Angeles that April night 25 years ago is a critical part of the current national conversation on policing and race. For the LAPD, there have been huge changes.

This week, NPR is taking a look at the legacy of the 1992 Los Angeles Riots, 25 years later. Follow our coverage here.

"I can honestly say the LAPD of 2017 is not your grandfather's LAPD, and it's not the LAPD of Daryl Gates, that 25 years ago, plunged this city into the biggest riot in (modern) American history," says civil rights lawyer Connie Rice. Rice spent a lot of time from the late 1980s through the mid-90s challenging police aggression in the city's communities of color, especially people in poor parts of the city where policing was designed less to protect and serve, more to contain and suppress. 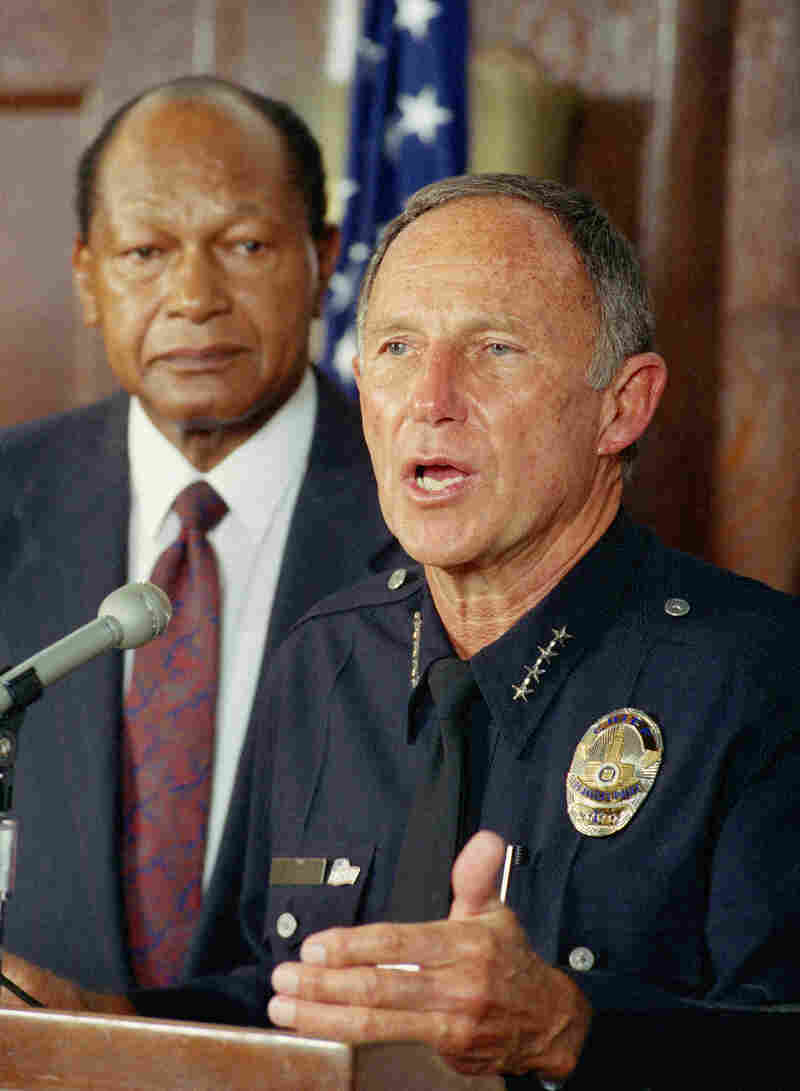 The police department in 1992 was largely white and overwhelmingly male. It was led by Chief Daryl Gates, an authoritarian who ruled from the top down, and brooked no opposition from those lower on the organizational chart. Gates was career LAPD, and he'd learned policing from Chief William Parker, the man who'd taken the department from a notoriously corrupt, racist machine to a sleek, paramilitary network of officers. Parker ran the LAPD before there were term limits, and was the longest-tenured chief in department history (1950-1966). Gates served as his driver and protégé before eventually ascending to the top spot himself in 1978.

Like Parker's LAPD, the organization under Daryl Gates was especially hard on communities of color.

For years before the '92 riots, Rice says, cops felt comfortable denigrating black and brown people over their radios. When the transcripts of those conversations were introduced in court cases, Rice says, "they raised the veil on the subterranean culture that LAPD exposed to the black community and the poor Latino community and any community that they decided wasn't on the right side of the thin blue line."

Being brown or black automatically made one suspect to beat officers, says writer Joe Domanick, who has spent much of his career reporting on the LAPD, as well as chronicling its evolution in his book Blue. "The LAPD was doing stop and frisk long before it was ever labeled stop and frisk," Domanick insists. This meant the department's infamous arbitrary stops — where police would roll up on a subject, jump out and make him "assume the position" (on their knees, hands behind the head, or "proned out" on the ground, face down) — often targeted law-abiding black and brown citizens. Workers. Teachers. Ministers. Anyone they felt merited a closer look. Several decades of these stops, and the brutality that often accompanied them if the person stopped asked why he was being stopped, contributed to a deep well of resentment in many of the city's black and brown neighborhoods. 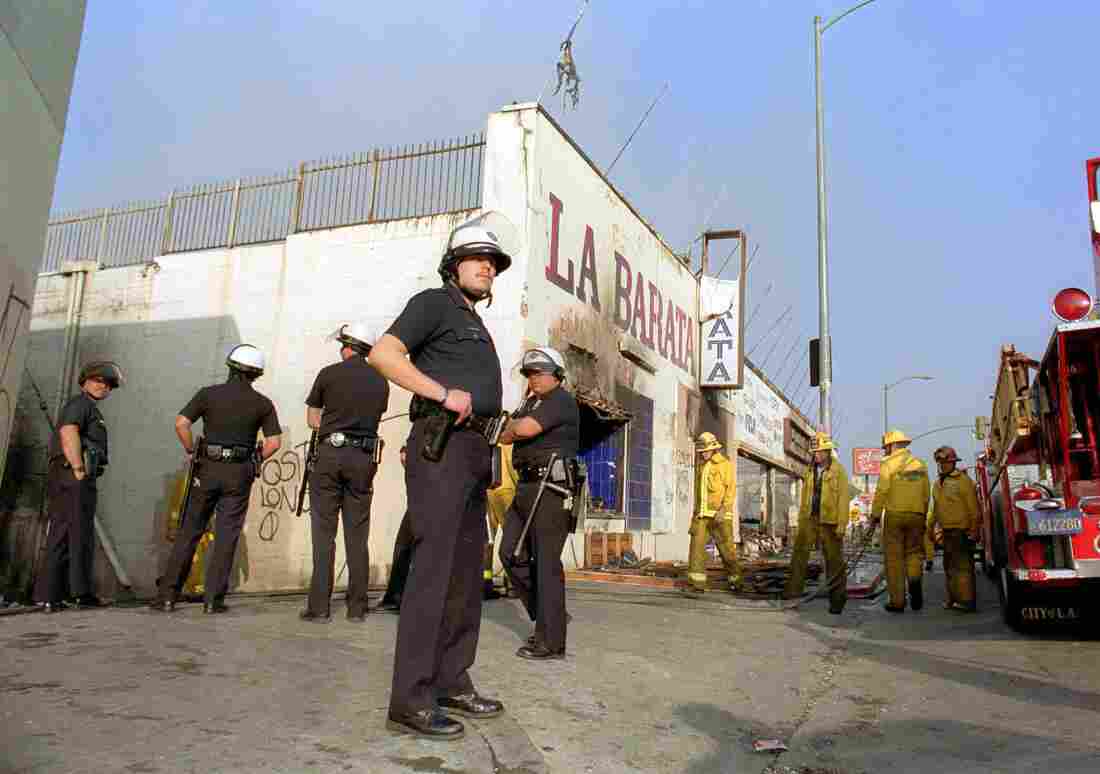 Los Angeles police officers in riot gear stand guard at a grocery store that had been burned down near downtown Los Angeles on April 30, 1992. Don Emmert/AFP/Getty Images hide caption 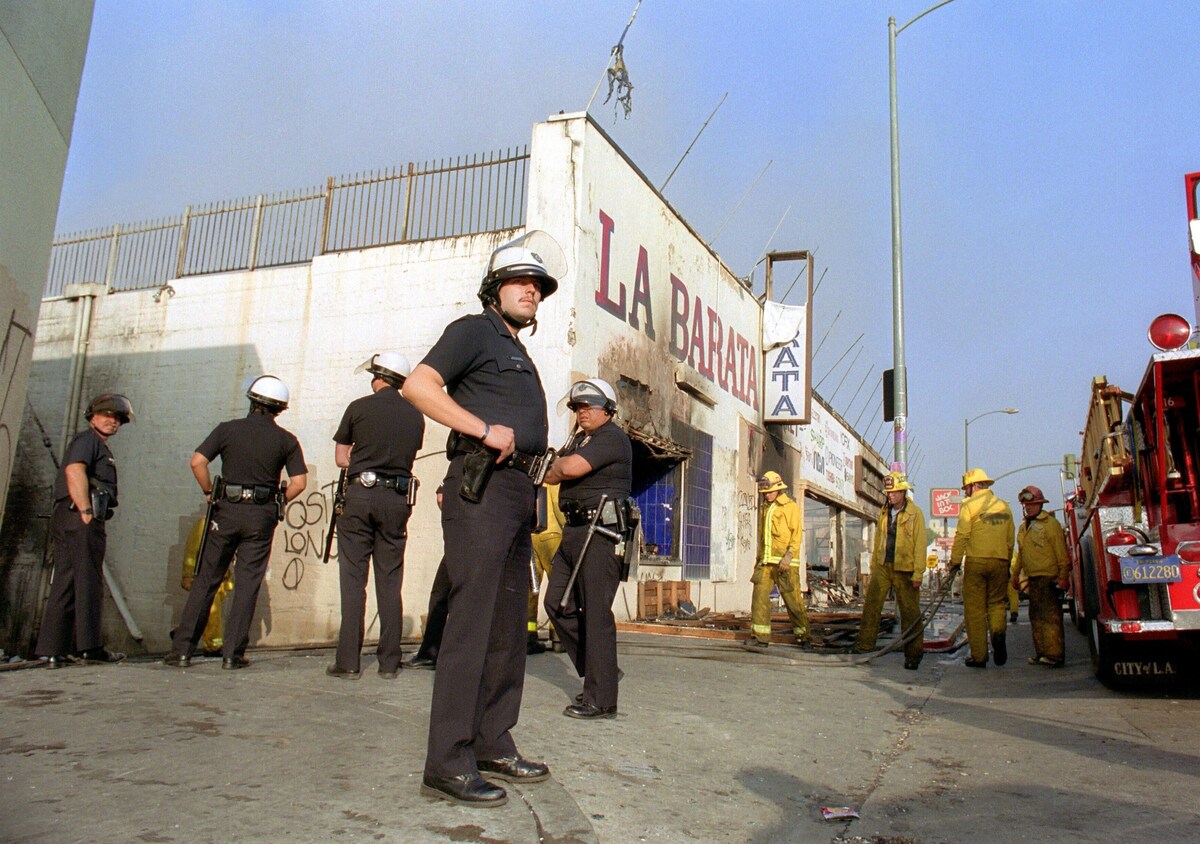 Los Angeles police officers in riot gear stand guard at a grocery store that had been burned down near downtown Los Angeles on April 30, 1992.

So when the verdict from a mostly white jury came back, the fury wasn't just at the apparent miscarriage of justice. There was plenty of that — the videotape of King's beating had circulated globally; many felt a conviction was a slam-dunk. The rage was in opposition to decades of police mistreatment suffered by people who weren't named Rodney King.

In June, after the ashes cooled and Gates was forced to resign, the city got a new chief. An African-American one. Willie Williams arrived from Philadelphia and served one term. Most of the rank and file didn't want a black chief, and were offended that an outsider had been chosen to lead them. Williams did get some of his cops out of their cars and on the streets, and introduced the idea of community policing. But it wasn't enough. He was seen as a weak, ineffective leader and was gone in one term. 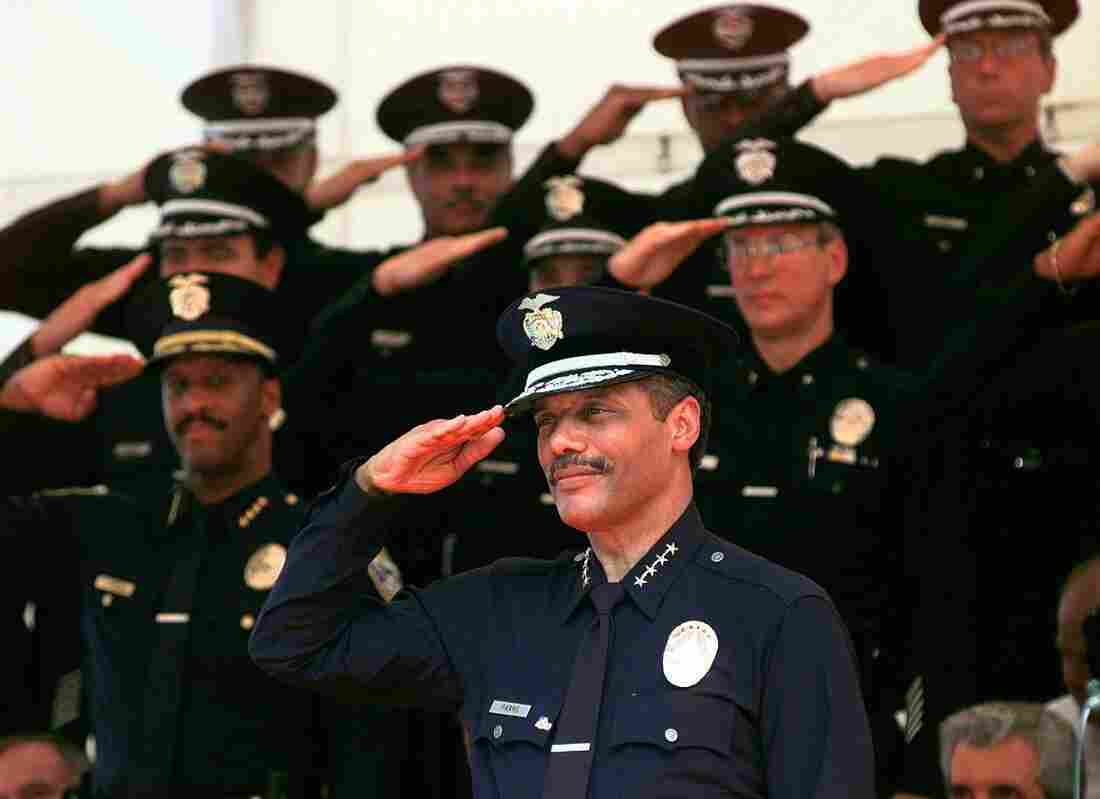 New LAPD Chief Bernard Parks returns the salute of his fellow officers during the change of command ceremonies at the Los Angeles police academy on Aug. 22, 1997. Kevork Djansezian/AP hide caption 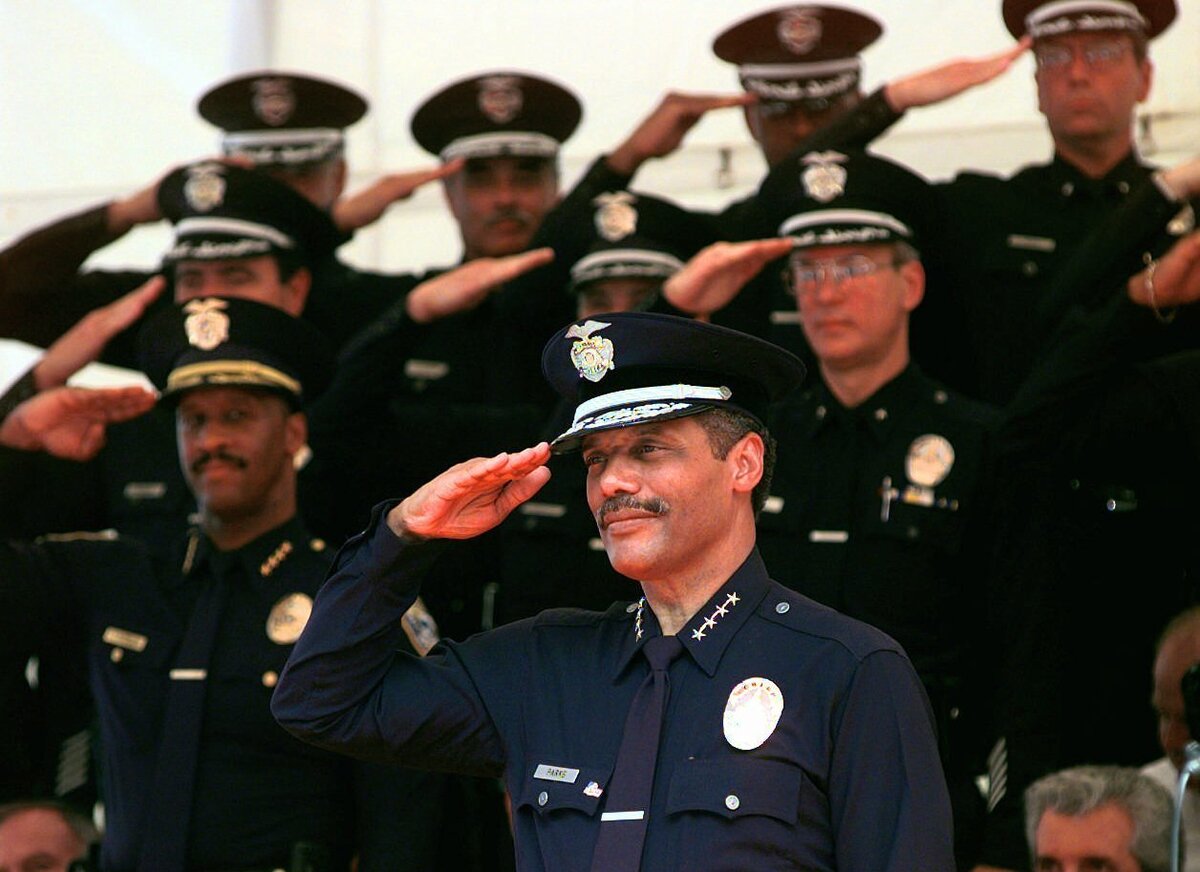 New LAPD Chief Bernard Parks returns the salute of his fellow officers during the change of command ceremonies at the Los Angeles police academy on Aug. 22, 1997.

The next chief was harder to dismiss. Bernard Parks was, like Gates, an LAPD lifer. Like Williams, he was also African-American. Unlike Williams, Parks was tall and trim and looked every inch the LAPD cop. (He was even named one of People Magazine's 50 Most Beautiful in 1998.) And like Gates, Parks was an authoritarian. His handling of the worst police scandal in modern LAPD history eventually cost him his job.

Jody David Armour, who teaches and writes about the nexus of race and the criminal justice system at the University of Southern California's Gould School of Law, says it's hard to conceive exactly how devastating the Rampart scandal was to the LAPD. "Try to imagine taking LA Confidential, Serpico and Training Day and rolling them all into one," Armour says, "and you still don't have the magnitude of the Rampart scandal."

In the Rampart scandal, several cops from an elite, anti-gang unit were supposed to infiltrate the criminal element that was preying on the mostly-immigrant communities Rampart served. Instead of tracking the bad guys though, some of the Rampart cops became the bad guys: They tortured suspects and sold cocaine they'd stolen from police evidence rooms. Parks oversaw an investigation into the scandal, and some police were prosecuted. But despite those convictions, many felt the investigation didn't go far enough. The LAPD was forced to accept federal oversight while it overhauled itself and Parks was denied a second term. It was time for another outsider.

Enter Chief William Bratton, who'd policed New York City until his good press got under the thin skin of then-mayor Rudy Giuliani. "Broadway Bill" — a cheeky reference to the chief's love of publicity — had lowered crime using data-based policing, which analyzed information about where crimes occurred, and then dispatched adequate numbers of police to those areas to suppress it. Quality of life issues improved: a lot of homeless were hustled off the streets, the "squeegee men" who accosted drivers near tunnels and bridges demanding to clean their windshields, disappeared, the subways were safer. But vast numbers of minority New Yorkers, especially blacks and Latinos, were unfairly targeted by Bratton's stop-and-frisk tactics. Bratton brought his data-based policing to Los Angeles, but LA wasn't New York — for one thing, there was way more real estate to cover by a relatively small police force.

Armour says Bratton had to adjust his methods to his new city: "He had to develop a more community-oriented policing model, and found that actually improving those community-police relationships was consistent with good law enforcement practices, cause crime went down." Bratton also engaged the LAPD's nemesis, Connie Rice, to help him change the department's culture. At Bratton's behest, Rice got carte blanche to interview hundreds of working police officers, who told her what the challenges and potential rewards could be to changing how the LAPD operates.

There was an active effort to recruit beyond the previous white male standard. "And as more cops of color came in, you had more progressive ideas," Rice believes. "They also stopped simply taking military people. They looked for teachers, they looked for social workers, they looked for artists. So it was a different mix of recruitment."

Bratton stayed for seven years, and left, having pointed to a hand-picked successor, Charlie Beck. 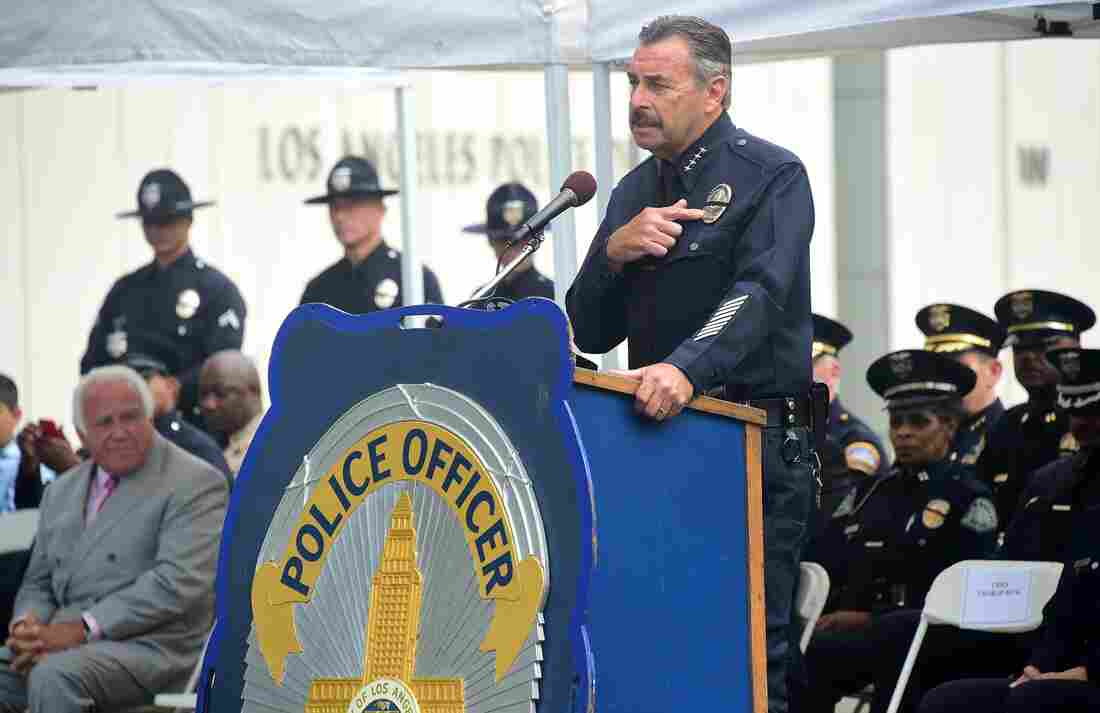 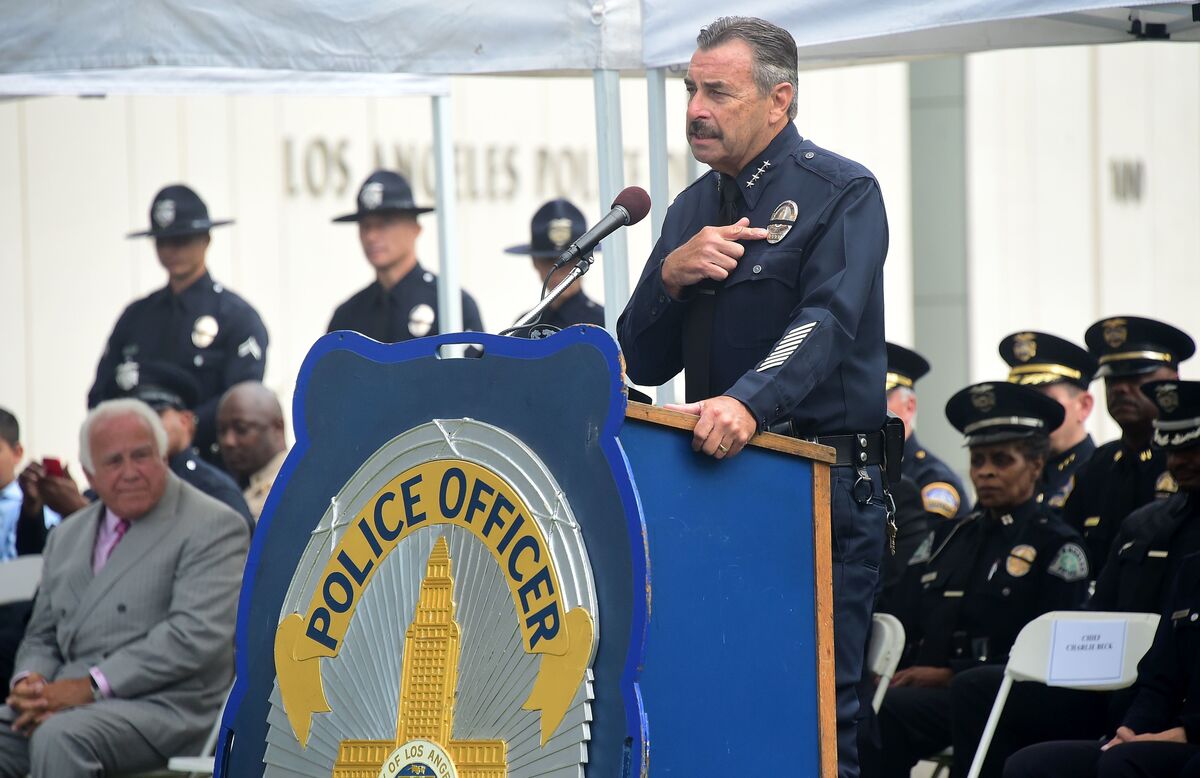 Beck is the son of an LAPD officer and husband of another. Two of his children and a son-in-law are also LAPD. Beck, who oversaw and rebuilt Rampart post-scandal, wanted his officers to have the flexibility to handle things out in the field as each situation demanded. No more calling back to HQ for permission to deviate. He wanted them policing in ways that they didn't themselves become the news. (Sometimes that worked, sometimes it didn't.) He also approved of several pilot projects in the city's sprawling housing projects, engaging lead residents with police officers to form community police partnerships to fight crime and reduce conflict both within and between different projects. "They serve the poor community instead of terrorizing it," Rice says.

Beck doesn't do this from Parker Center. No shrine to any past chief, the new LAPD is run from a new building with a plain-wrap name: The Police Administration Building. And because crime is significantly lower than it was in the 90s, Beck says, his people have more latitude to try different ways to police. "Rather than just chase the symptoms that are crime all day long, we can work on the root causes. So I think that's why you see us being able to emphasize trust at a greater rate than our predecessors did."

Some of that trust has been dented in the past few years, because of a number of police shootings of unarmed people of color. "There are relatively fewer than there used to be," says Joe Domanick, "but there are still questionable shootings." Even after police training and shooting policy were changed.

It may not change fully for another few years. If Charlie Beck stays till the end of his second term that, combined with Bill Bratton's previous tenure will have given LA 17 years of reform. Maybe still not enough time — but far different from the LA that blew up under Daryl Gates. LA's black and brown communities, says Rice, "have had a hundred years of abuse. They don't get erased because you've been decent for five years."

Even with the setbacks, Domanick sees overall progress. "How do I know?" he asks. "You don't have an instinctive dislike or reaction to LAPD officers." Not at the 1992 levels, anyway.

NPR's Anjuli Sastry produced and Melissa Gray edited All Things Considered's series of reports on the 25th anniversary of the Los Angeles riots.