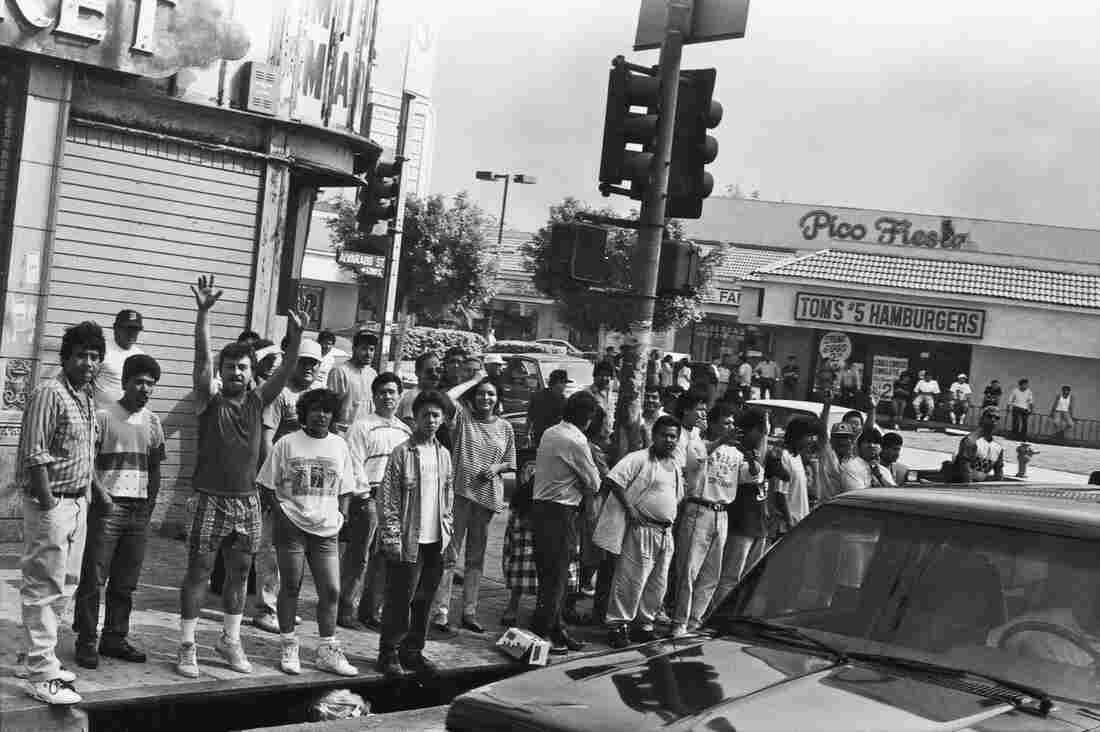 People gather in the Pico-Union neighborhood of Los Angeles during rioting following the acquittal of four police officers in the beating of Rodney King in 1992. The neighborhood looks similar today as it did 25 years ago. It's still more than 80 percent Latino, with lots of immigrant families from Mexico and Central America. Gary Leonard/Corbis via Getty Images hide caption 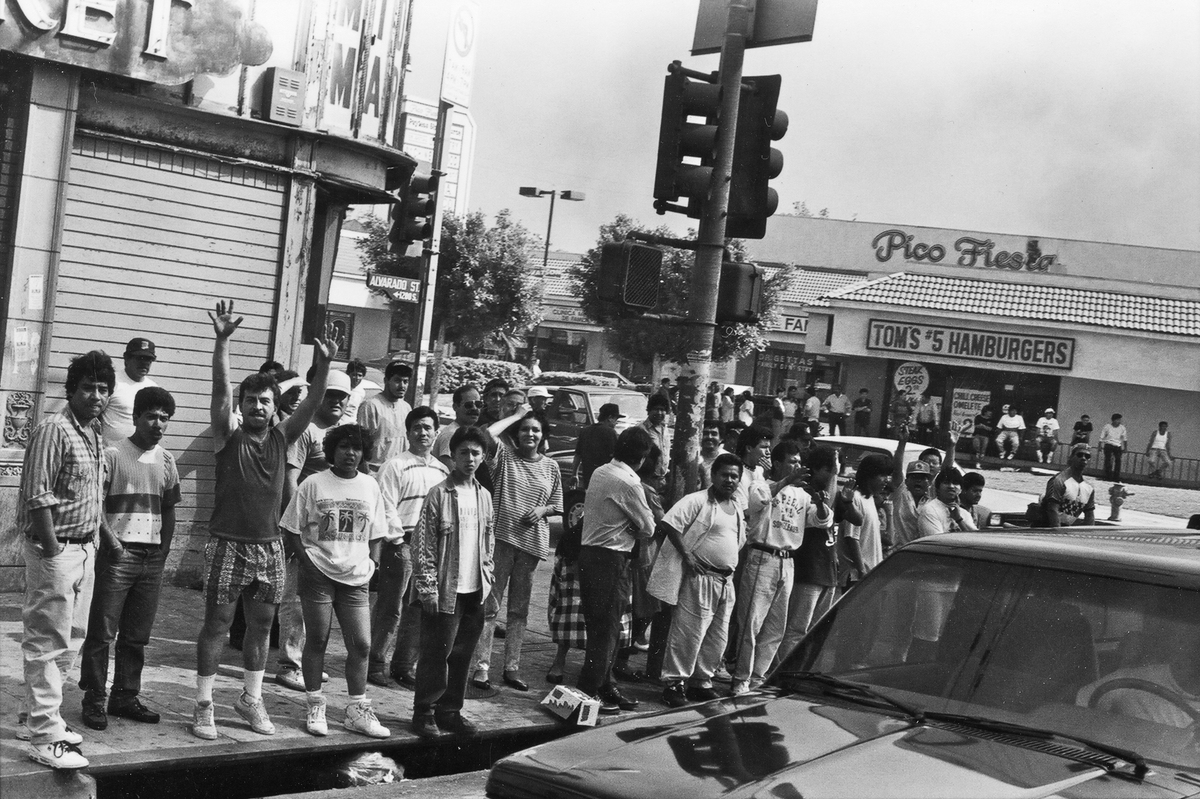 People gather in the Pico-Union neighborhood of Los Angeles during rioting following the acquittal of four police officers in the beating of Rodney King in 1992. The neighborhood looks similar today as it did 25 years ago. It's still more than 80 percent Latino, with lots of immigrant families from Mexico and Central America.

Looking back at the 1992 Los Angeles riots, people often remember tensions between African-Americans, white law enforcement officers and Korean small business owners. That story gets even more complicated when you step into Pico-Union — a neighborhood that was, and still is, predominantly Latino.

In the wake of the Rodney King verdict, riots broke out around the city. The first day, they erupted in South Central; by the second, they had spread north to Pico-Union. And while people all over the city had to deal with looting, fires, and general chaos, many residents of Pico Union had to deal with an additional fear — the threat of deportation.

This week, NPR is taking a look at the legacy of the 1992 Los Angeles Riots, 25 years later. Follow our coverage here.

Mike Hernandez was the neighborhood's city councilman in 1992. He said that in the 25 years since the riots, Pico-Union hasn't changed that much. The area is still more than 80 percent Latino, with lots of immigrant families from Mexico and Central America. And, in 1992, a majority of Pico-Union constituents were living below the poverty line in crowded conditions. Hernandez said he knew long before the riots started that Pico-Union was just as combustible as South Central LA. "We had twice the density here of Manhattan," Hernandez said. "And our fire station here, Fire Station 11, was the busiest fire station in the nation."

But in the midst of the burning and looting, Hernandez said the few law enforcement officers who made it to Pico-Union were not protecting and serving. He partially blamed it on the fact that in the early 1990s, "Latino" was often synonymous with "illegal" in California. In a 1992 interview, he told NPR that his request for reinforcement during the unrest didn't get him the results he wanted. "The response to me when I said I needed the National Guard to protect the people of the area and I needed to protect the businesses and protect the homes, they gave me the Border Patrol. It was totally an insult," he said. 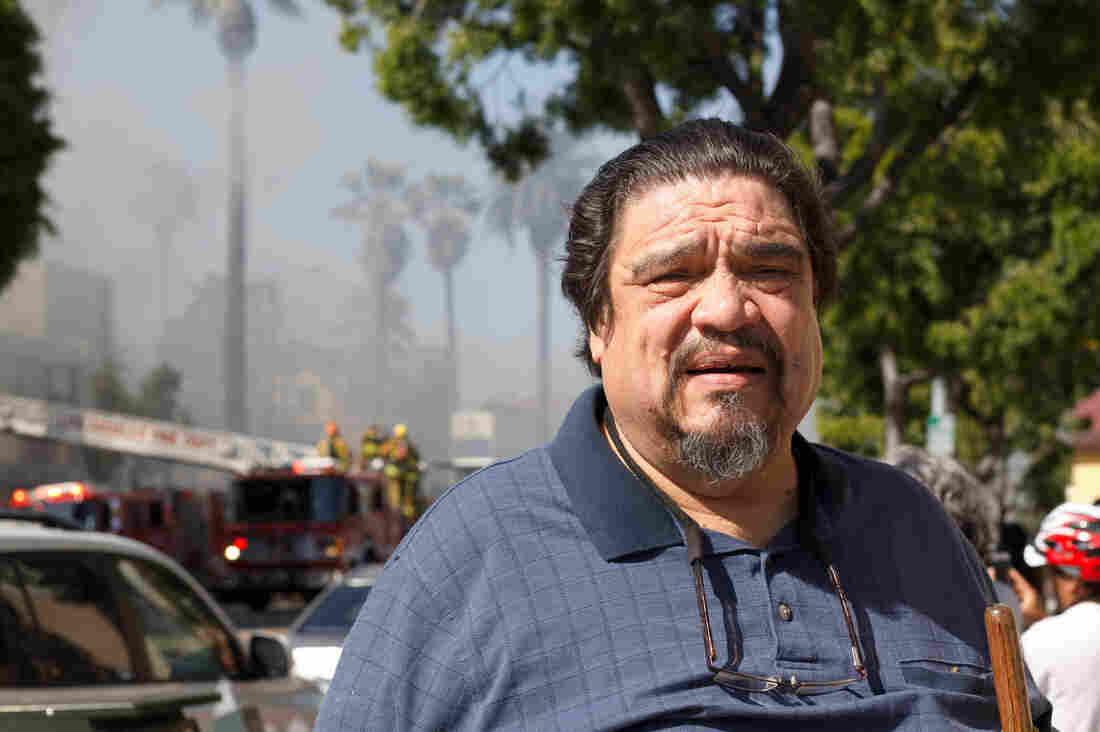 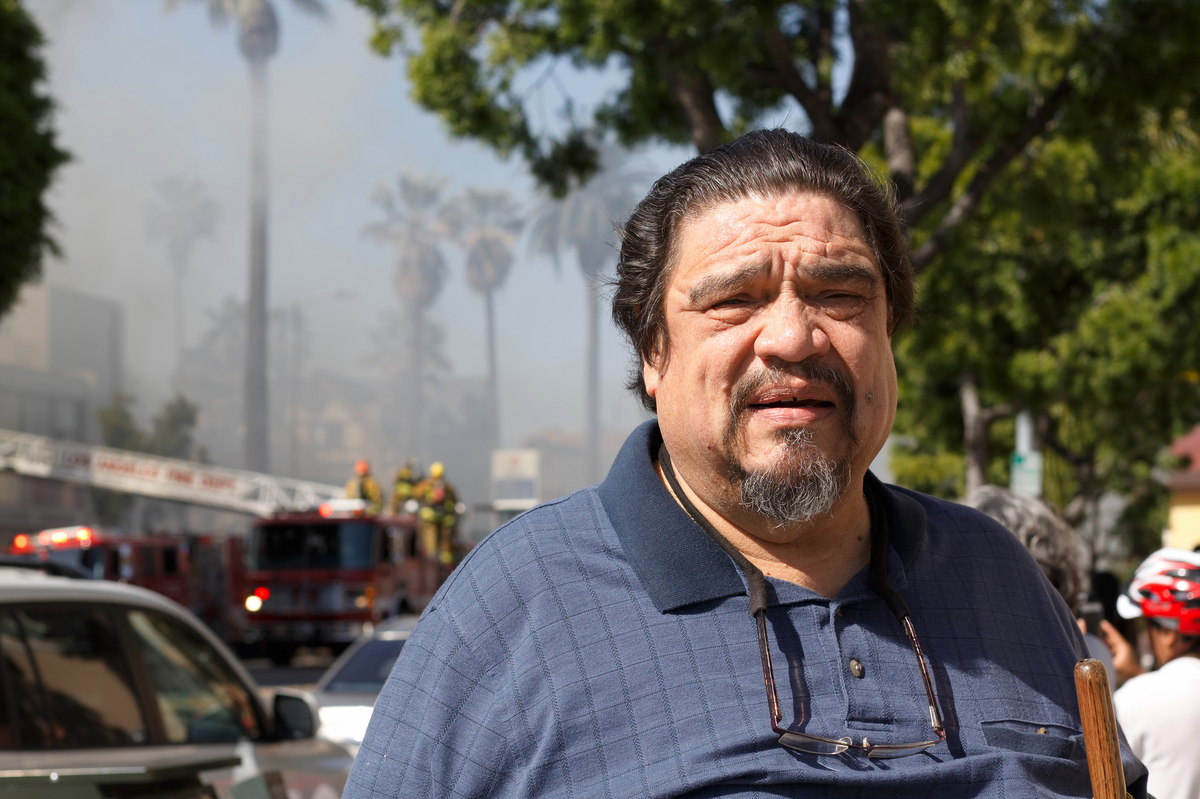 Hernandez doesn't deny that people in Pico-Union were among the looters, but he said he saw people taking basics, like food and diapers. The vast majority of his constituents were scared out of their minds and hiding in their homes. The rioting and chaos, he said, triggered past trauma for many of the Central American immigrants who had fled civil war. And the presence of the Immigration and Naturalization Service, which included the Border Patrol back then, seemed to be fueling that fear — with good reason.

Documents gathered during the Webster Commission, the FBI's months' long investigation into the Los Angeles Police Department's response to the riots, included declarations from Pico-Union residents. Many of them were arrested by the LAPD for illegally residing in the U.S. and turned over to the INS.

During the LA riots, Madeline Janis ran a Pico-Union based non-profit called CARECEN (Central American Resource Center), which is still in the neighborhood and provides multiple services to immigrants. In the aftermath of the unrest, Janis, an attorney, helped a couple dozen people facing deportation — people like Martha Campos, a Salvadoran woman arrested by the LAPD at three in the afternoon on April 30, 1992 while drinking a fruit juice in front of a convenience store. At the time, Campos was eighteen years old.

"An officer demanded to know my name, if I had any immigration papers and what country I was from," Campos said in her declaration, taken after two weeks in immigration detention at Terminal Island in San Pedro. She added that the LAPD questioned her about her immigration status. "I responded that I had no papers and I told him what country I was from...I was then taken to a police station with many other people. Immigration arrived in several vans and took me and many other people away."

Campos said that in detention she slept on narrow concrete benches, was fed dry meat and old bread, and not allowed to bathe. She was seven months pregnant. Campos said that she was afraid that the treatment she endured while in INS custody could cause serious harm to her or her baby.

Madeline Janis said she's almost positive she was able to get Campos a hearing in immigration court, even though the 18-year old signed a voluntary departure document the day of her arrest. (NPR tried to find Campos and other detainees who gave declarations, but was unable to locate anyone 25 years after the incident.) Janis said the entire ordeal was so upsetting that it was hard for her to recall the events after our initial interview request. "This was so awful, I think I blocked it out of my memory. I think it's because people suffered so much that I really ... just blocked it." 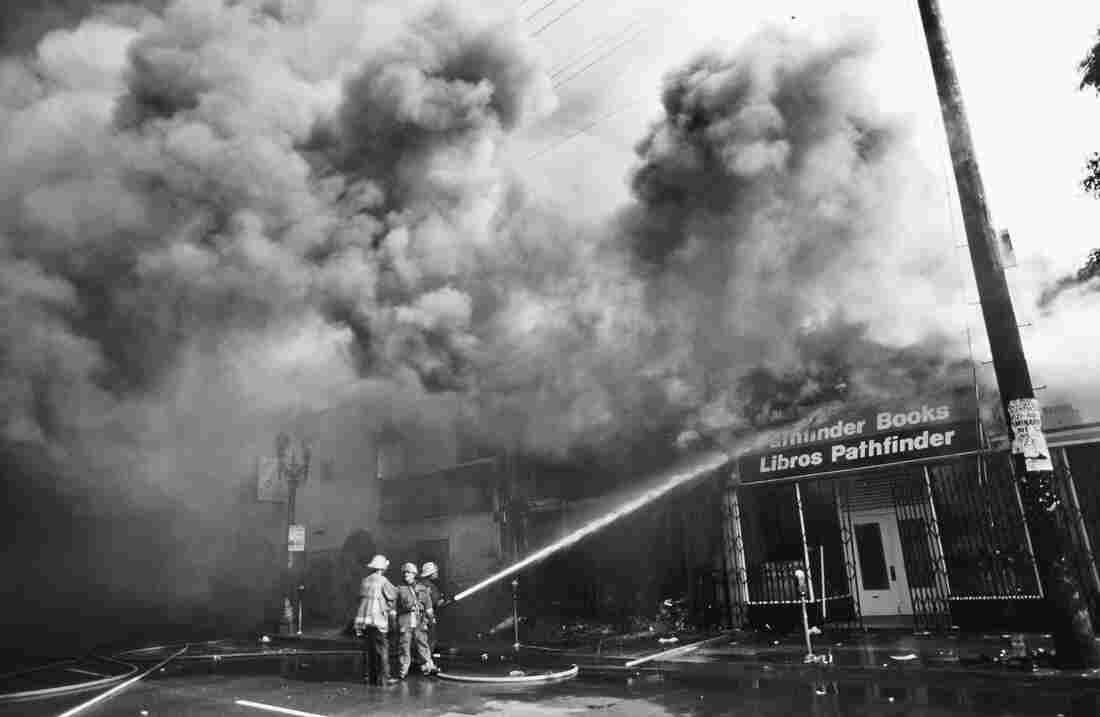 The Pathfinder bookstore on Pico Blvd. burns in the Pico-Union area of Los Angeles during the riots in 1992. Ted Soqui/Corbis via Getty Images hide caption 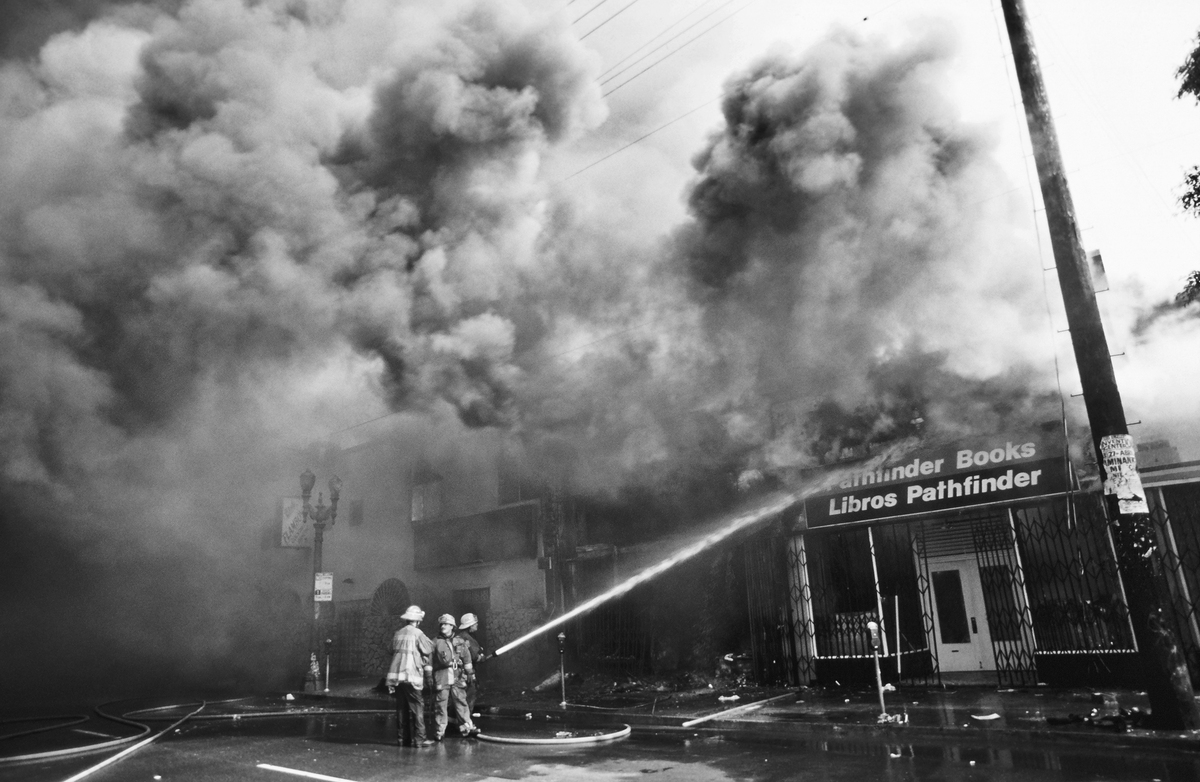 The Pathfinder bookstore on Pico Blvd. burns in the Pico-Union area of Los Angeles during the riots in 1992.

What happened to Martha Campos shouldn't have.

According to a rule called Special Order 40, which has been around since the late 70s, the Los Angeles Police Department wasn't, and still isn't, allowed to "initiate police action with the objective of discovering the alien status of a person." They can only involve immigration enforcement when an unauthorized person has been arrested for serious misdemeanors or a felony. Among the Webster Commission papers archived in 40 cardboard boxes at the USC library, there were Immigration and Naturalization Service documents that show 86 percent of more than 1,200 undocumented "riot aliens" they received from the LA County Jail, the LAPD and other law enforcement were deported. Those documents only cover May 1 to May 4, 1992 (the unrest began on April 29th); and they do not specify what crimes those detained and deported were charged with.

Robert Moschorak was the district director of the INS in Los Angeles during the unrest. He remembers the riots differently than people like Hernandez and Janis. Moschorak, who has been retired for 23 years, said the riots were an all-hands-on-deck situation, and he sent in agents to help as requested, sometimes to just interpret for LAPD officers. As for Special Order 40, he told me he wasn't aware of it then, and doesn't agree with the policy now. "I think that's ridiculous," Moschorak said. "You know, many people don't realize that illegal entry into the United States is a misdemeanor in and of itself, a violation of 8USC1325 and re-entry is a felony. How long are we going to accept that in our society?" 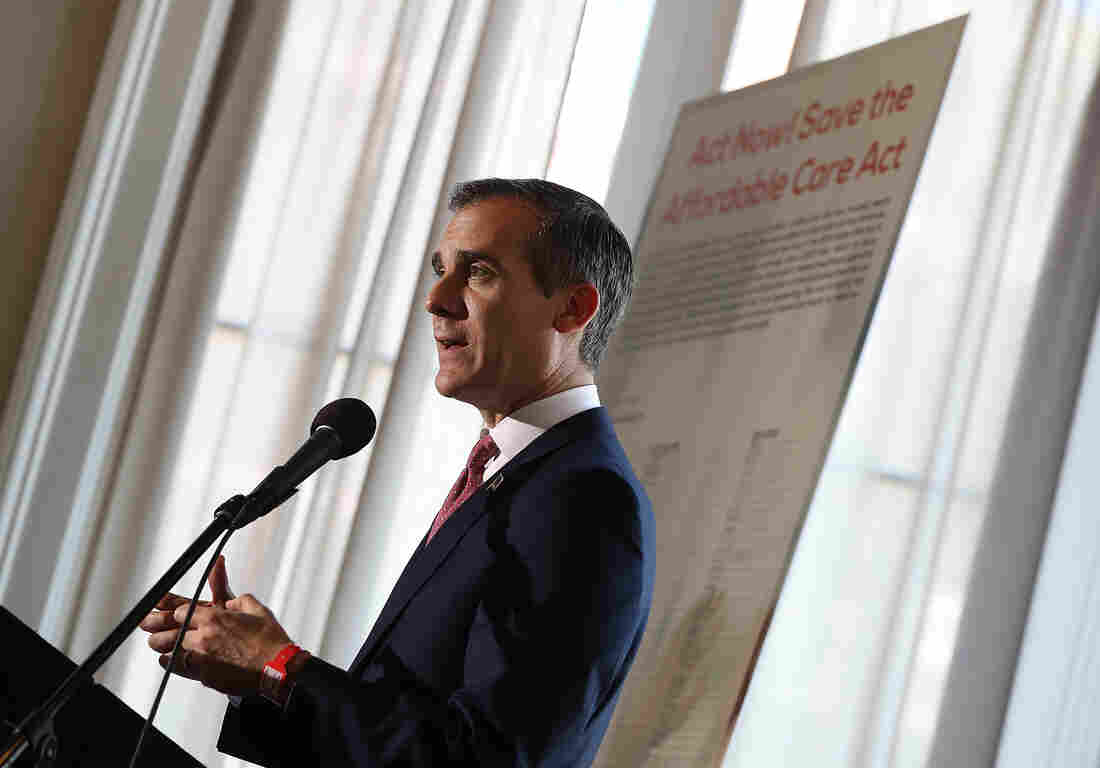 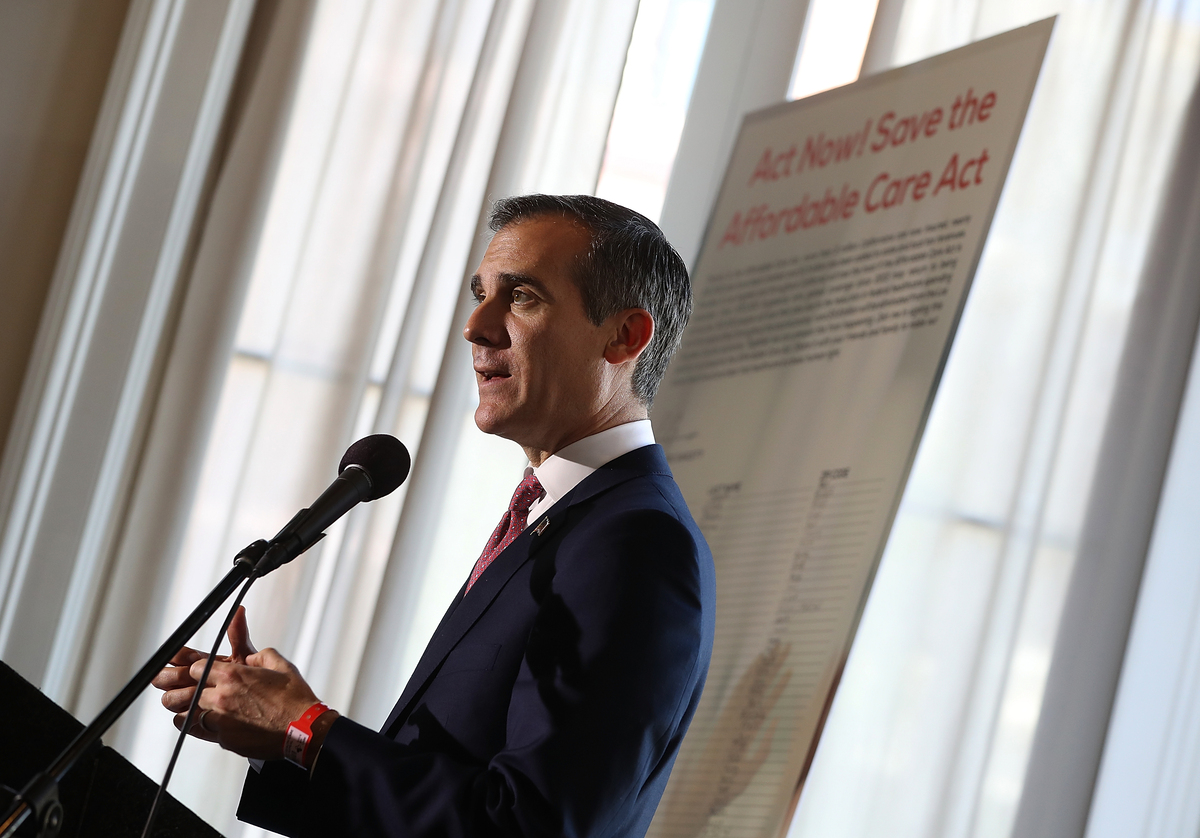 Not everyone shares Moschorak's contempt for the order.

Chief Beck has been at the LAPD as long as Special Order 40 has been around, and said he can't recall a time it wasn't followed, even after learning about the Webster Commission documents that show otherwise. Regardless, Beck said it has long been crucial that the LAPD isn't thought of as immigration enforcement, because it erodes trust and immigrants stop reporting crime.

Just last month, LA Mayor Eric Garcetti expanded Special Order 40 to include fire fighters, port and airport police. At the event where Garcetti signed the executive directive, Beck told the audience that crime reporting has dropped significantly in Latino communities this year over fear that interacting with local law enforcement may lead to deportation.

Immigrant rights activists in 1992, and a new generation of activists today, don't think the order goes far enough to protect LA's immigrants — no matter how it's implemented. Many in California's immigrant rights movement are calling for zero cooperation between local law enforcement and federal immigration enforcement. (And a bill under consideration in the state legislature may decide that issue state-wide.)

But 25 years ago, when Los Angeles was burning, Special Order 40 appears to have been an afterthought amidst the chaos. Garcetti said that this new generation of police officers understand the need for Special Order 40 from both moral and practical terms. Garcetti said that it's one thing to have a policy on the books, "But it's another thing to make sure that it's enforced, and enforced by everybody." The mayor added that we continue to learn lessons from the LA riots 25 years later. "We're not perfect, but in this imperfect paradise that we call Los Angeles, I think we're better and more resilient because of what we went through in 1992."

Parker Yesko, an NPR intern on the National Desk, and NPR digital producer Leah Donnella contributed to this report. NPR's Anjuli Sastry produced and Melissa Gray edited All Things Considered's series of reports on the 25th anniversary of the Los Angeles riots.