Accessibility links
Why A Theater Director Made A 'Color-Conscious Choice' In 'Virginia Woolf' Casting : Code Switch A small theater in Portland, Ore., cast an African-American actor in Edward Albee's Who's Afraid of Virginia Woolf? But the Albee estate wouldn't grant the rights to produce the 1962 play. 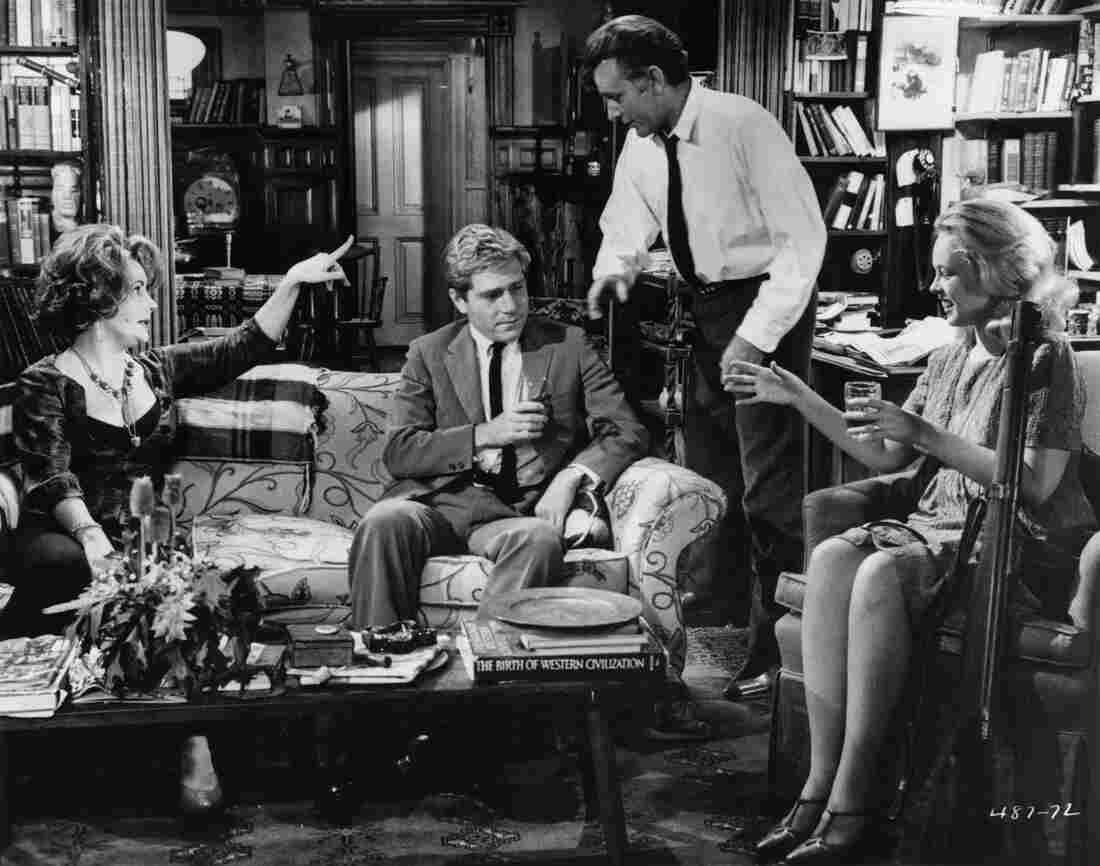 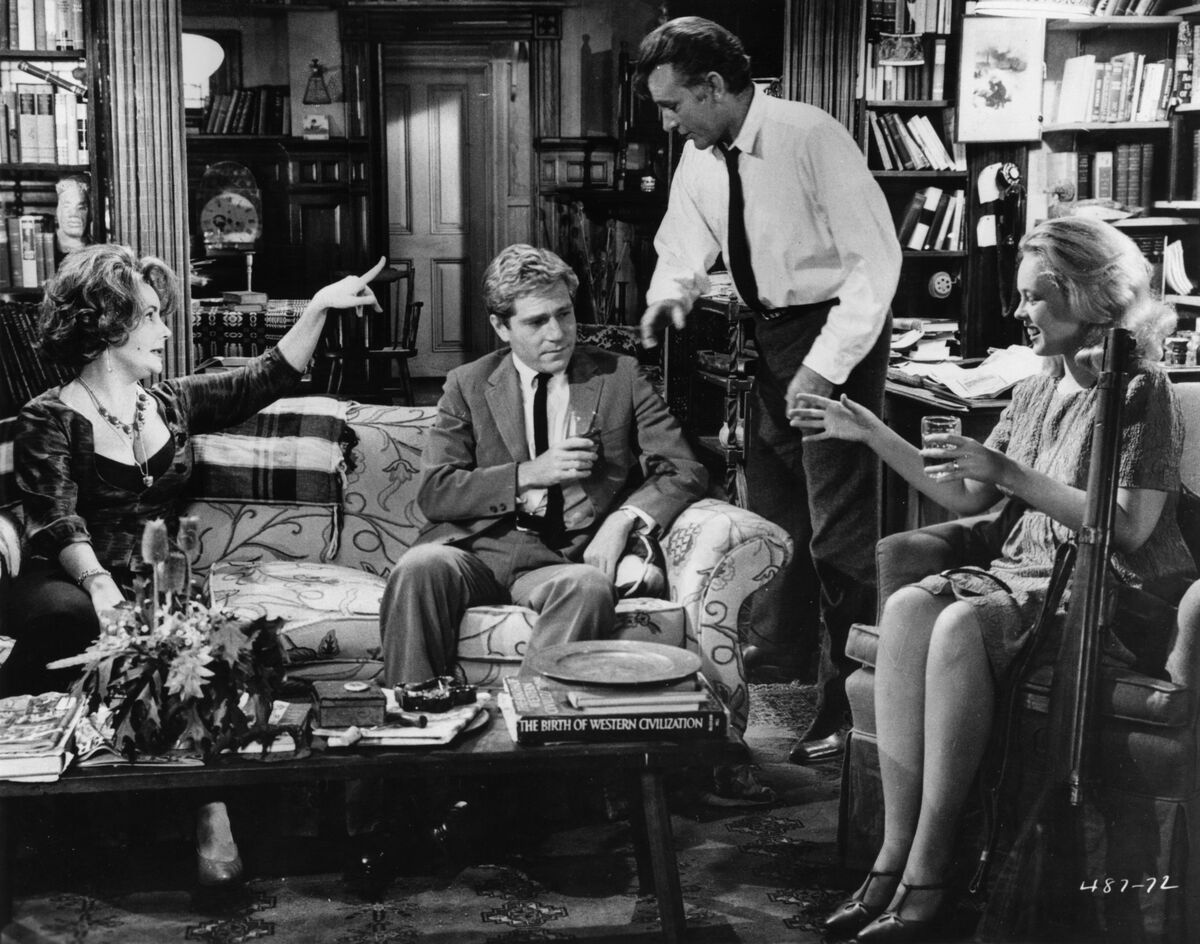 Elizabeth Taylor, (from left) George Segal, Richard Burton and Sandy Dennis starred in the 1966 film adaptation of Edward Albee's play, Who's Afraid of Virginia Woolf? A theater director in Portland recently cast an African-American actor as Nick (Segal's role) — and found the Albee estate withheld rights to the play.

It all started when a director and producer from a tiny theater in Portland, Ore., posted a message on Facebook; he was outraged that the Edward Albee estate wouldn't grant him rights to produce Who's Afraid of Virginia Woolf? because he'd cast a black actor in one of the roles. His post went viral, and a firestorm ensued.

Michael Streeter says he wanted to dust off Albee's 55-year-old play and give it a new angle. So, he cast an African-American actor in the role of Nick, a young biology professor who visits an older academic couple with his wife. Nick is described in the script as blond and blue-eyed.

"In 1962, the year the play was written, African-Americans were facing tremendous strife with the civil rights movement and the character of Nick was ambitious," Streeter says. "He is striving to get ahead and he puts up with a lot of invective from the other characters in the play. And this is something that I see as emblematic of what was happening in the African-American community in 1962."

Playwright Edward Albee, Who Changed And Challenged Audiences, Dies At 88

But the Albee estate — which approves the casting of all professional productions of the late playwright's work — did not agree. Streeter vented his frustration online and the media responded.

Chicago-based actress Tania Richard, who co-hosts a podcast called Race Bait, wrote a blog post about it. Richard is black, Streeter is white.

"I knew the minute I read the initial article that I felt it wasn't racist," Richard says. "That I felt it was completely within Albee's estate's rights to maintain the vision that he intentioned. ... To ask the character of Nick to be black, in this world, in the '60s on a small campus in New England, is sort of suggesting an alternate universe that couldn't have existed, you know? And this isn't a fantasy piece. This is a very specific piece."

Many plays in the American canon are very specific about time and place, which can limit opportunities for actors of color. So, for years, theaters have attempted to correct this with color-blind casting. There have been mixed-race productions of plays by Arthur Miller, Tennessee Williams and the musicals of Rodgers and Hammerstein, says New York Times drama critic, Ben Brantley.

What Streeter was proposing with Who's Afraid of Virginia Woolf? was not color-blind casting.

"There's also color conscious-casting, where you deliberately choose to cast a person that is different from what's written in the play," Streeter says. "This was a color-conscious choice on my part because I thought that it added depth to the play; that there would be certain lines that would have more resonance. There would be the question that would happen throughout the play, as the audience is watching these people abuse this character. And you wonder, 'OK are they going to start using racial slurs?' "

In the boozy second act of the play, things get particularly nasty between the two academic couples.

"Will they or won't they throw a racial slur at this guy ..." Richard says. "As an actor, I don't want to be put in that position. I don't want to be sort of the target for the audience almost blood lust about whether or not the character is going to be called the N-word or not. That's creating a whole other layer to the piece that was never intended in the first place."

The Albee Estate wouldn't speak directly to NPR about the decision. Instead, it sent a statement, saying Albee had remarked on several occasions that a mixed-race marriage in the early 1960s would not have gone unnoticed in the script — though Albee did approve the casting of a black actress as the older professor's wife when the playwright was still alive. This is the first time the estate has had to deal with this issue since Albee's death in September 2016.

"The vast majority of roles in Edward Albee's almost 30 plays can and should be cast diversely," wrote Sam Rudy, spokesperson for the Albee Estate. "The Estate is eager to encourage as much diverse casting as possible. There are many opportunities for diverse casting throughout the body of Edward's work with the most recent example being Sophie Okonedo and Archie Madekwe as Stevie and Billy in the current the West End production of The Goat, or Who Is Sylvia?"

For his part, Streeter, while disappointed, understands the estate's position.

"I don't think this is racially motivated," he says. "This is absolutely about a fealty to the integrity of Edward Albee."

New York Times drama critic Ben Brantley says he kind of likes the idea of Nick as a black man. "I could see it being played that way," he says. "I could see it bringing out elements in George and Martha. On the other hand, it would be a different play."

Ultimately, when it comes to inserting your own ideas into someone else's play, Tania Richard always remembers the advice of one of her old writing teachers:

"He had this wonderful quote where he would say: Well, maybe you should write that play."