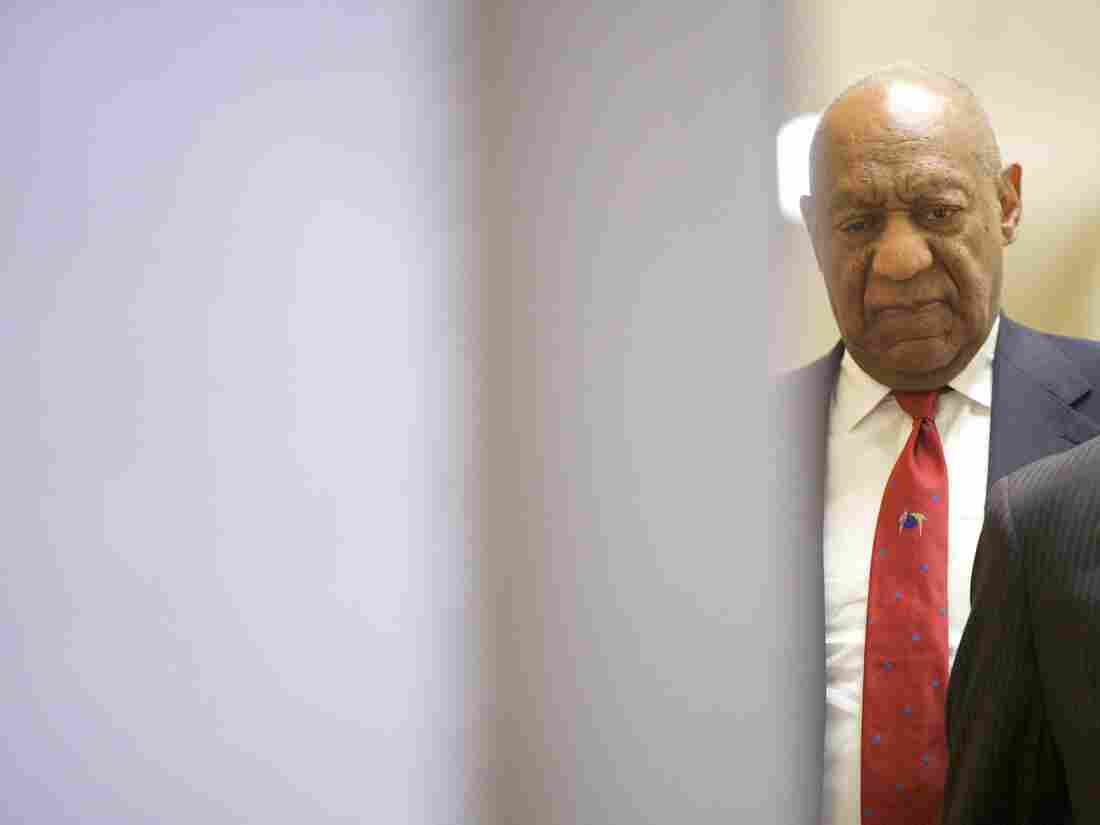 Bill Cosby walks after it was announced a verdict is in at the Montgomery County Courthouse for day fourteen of his sexual assault retrial on April 26, 2018 in Norristown, Pennsylvania. Mark Makela/Getty Images hide caption 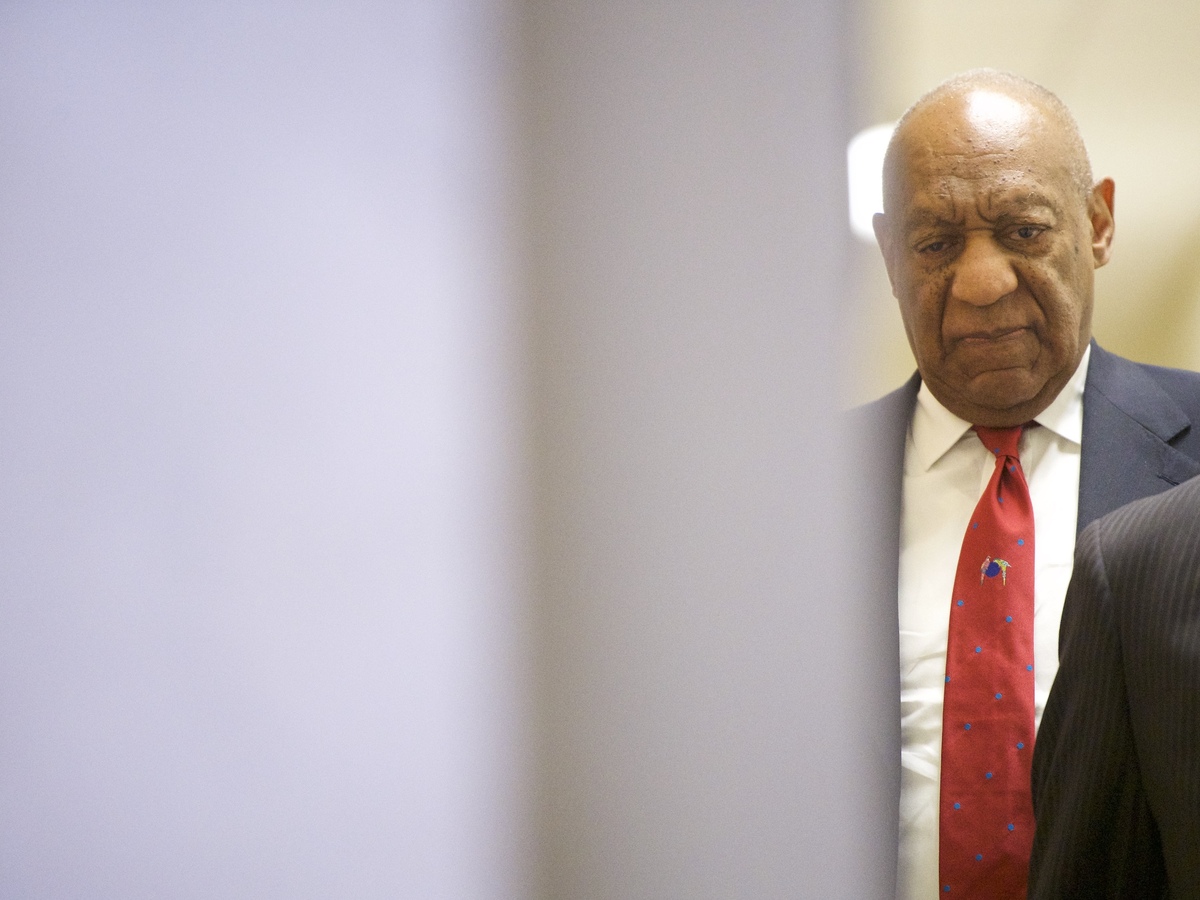 Bill Cosby walks after it was announced a verdict is in at the Montgomery County Courthouse for day fourteen of his sexual assault retrial on April 26, 2018 in Norristown, Pennsylvania.

UPDATE: On April 26, 2018, Bill Cosby, the comedian and philanthropist, was convicted on three counts of sexual assault. The following essay was published in June 2017, during Cosby's first trial on sexual assault charges in 2017. Those proceedings ended in a mistrial.

Every Friday morning when I was very little, the women who ran the daycare center I went to would gather all the kids into a circle and goodnaturedly quiz us on what happened the night before on The Cosby Show.

I distinctly remember the first time I sat in that circle having no idea what The Cosby Show was, feeling whatever pre-kindergarteners understand as shame. The center's staffers were all black, as were we, the assembled moppets. Watching the Huxtables was quite literally my first homework assignment.

The show was, of course, the most popular program in America for the better part of a decade, in no small part because it managed to be both very funny and allowed white audiences to cotton to the wealthy, relatively apolitical black family at its center.

But The Cosby Show owed no small part of its influence to the fact that black folks considered its success part of a larger civic project — around race and representation and respectability — to which they had certain obligations. (Cosby's cultural ubiquity in the 1980s was even more pronounced for us Philadelphians; he was a local boy done very, very good, more famous and avuncular than even Ben Franklin.) Like so many important black institutions, The Cosby Show — and Cosby himself — was a private concern entangled with broad, collective stakes. "Rep sweats" on a trillion.

You could hear a nod to these dynamics on the trial's opening day, as Cosby arrived at a courthouse in Montgomery County, not far outside the Philly city limits, for his sexual assault trial. He was escorted by Keshia Knight-Pulliam, who played his youngest TV daughter Rudy, on The Cosby Show.

"I can only speak to the great man that I know and love, who has been so generous, who has been such a philanthropist and giving back millions of dollars to education and schools," the now 38-year-old actress told reporters.

It was a qualified defense of Cosby that still managed to neatly sum up some complicated context: Cosby had long encouraged the linking of his own fortunes with the condition of black folks more broadly.

As the dozens of rape and sexual assault accusations against Cosby have piled up, both he and his lawyers have tugged at that sense, trying to rally black support by suggesting that the claims are at least in part fueled by racism. Other black luminaries have played this hand — Clarence Thomas and O.J. Simpson, most notably — but Cosby's invocation has a different weight, however one might feel about its legitimacy.

Unlike those guys, he had been a race man for decades, and he had rewarded those communal stakes with literal investment. Black colleges and prospective black college students were buoyed by his philanthropy, while his collections of black art graced important museums. Even before his late-career turn as black America's moral scold, Cosby had spent decades leaning into his popular image as a paternal figure to bolster his influence as a paternalistic one.

And yet there have been notably few high-profile defenses of Cosby; most of the statements from his former Cosby Show cast members have been along the lines of Knight-Pulliam's; respectful to the man they still call "Mr. Cosby" but also cautious and tepid.

It did take a while for the drumbeat of accusations against Cosby to spur the many black institutions linked with him to start distancing themselves from him. In 2015, Spelman College, the famed all-women's institution in Atlanta to whom Cosby and his wife Camille donated $20 million in the 1980s, quietly did away with the endowed professorship that bore his name. Central State University, a black school in southwest Ohio to whom Cosby had bestowed millions, removed his name from the building that housed its school of communications. Other institutions have made similar calls — and for universities and colleges without large endowments, these are tough decisions. But the fact that these moves were met with little uproar is telling of just how much Cosby's power and influence has waned.

That's why it's worth noting how much the very real political position Cosby himself occupied — the kindly cultural ambassador of Negritude — has become if not entirely outmoded, then at least viewed far more skeptically.

Blackness has always been a variegated, sprawling thing, but there is far more room now for expressions of it in the wider culture. And where the Huxtables were once the template for black aspiration, there are now many — most notably the flesh-and-blood family that took up residence in the White House until very recently.

To the extent that folks have begun the knotty work of disentangling Cosby's fate and cultural legacy from their own, it's in part because there is no longer the same need for the sole figure anointed as a kind of racial emissary — a role Cosby once clearly reveled in playing.

No matter how his trial concludes, Cosby will live out his last years in an America where he has become far less essential. And it's an obsolescence that he, ironically, helped usher into existence.